Connect on Twitter
​I am not fond of tours. I just don't get the follow the sheep/herd mentality. I'd rather just blaze my own trail. So here I write about how I visited the Sumidero Canyon on my own, without taking an organised tour. 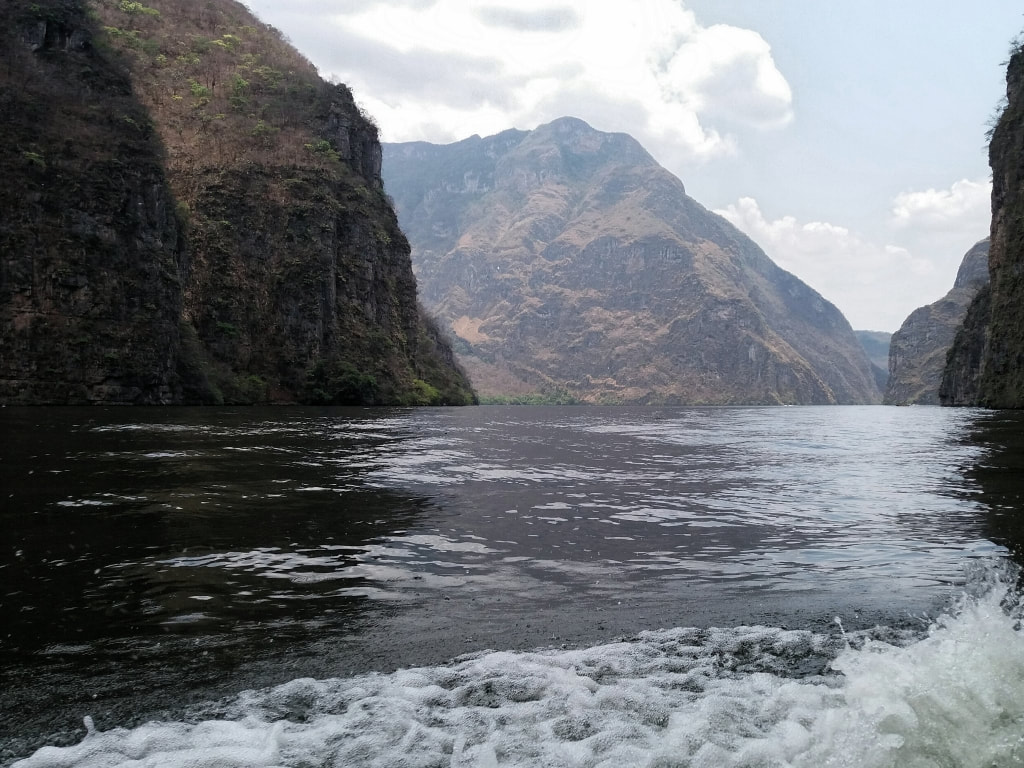 ​​​I am in San Cristobal de las Casas in the State of Chiapas.

I headed off using public transport to Chiapa de Corzo, the jumping-off point for a boat ride up the Cañón del Sumidero.

My only source of reference was on GoogleMaps of a boat landing stage:
I needed to get myself to Chiapa de Corzo. There is so it seems no direct transport. You must go first to Tuxtla and backtrack a ways. Not ideal but shit happens.

Colectivos (small mini-vans) run to Tuxtla, full name, Tuxtla Gutiérrez when full. There are a few companies that make the run. And such is the demand, they fill up quickly. 15 minutes is all. 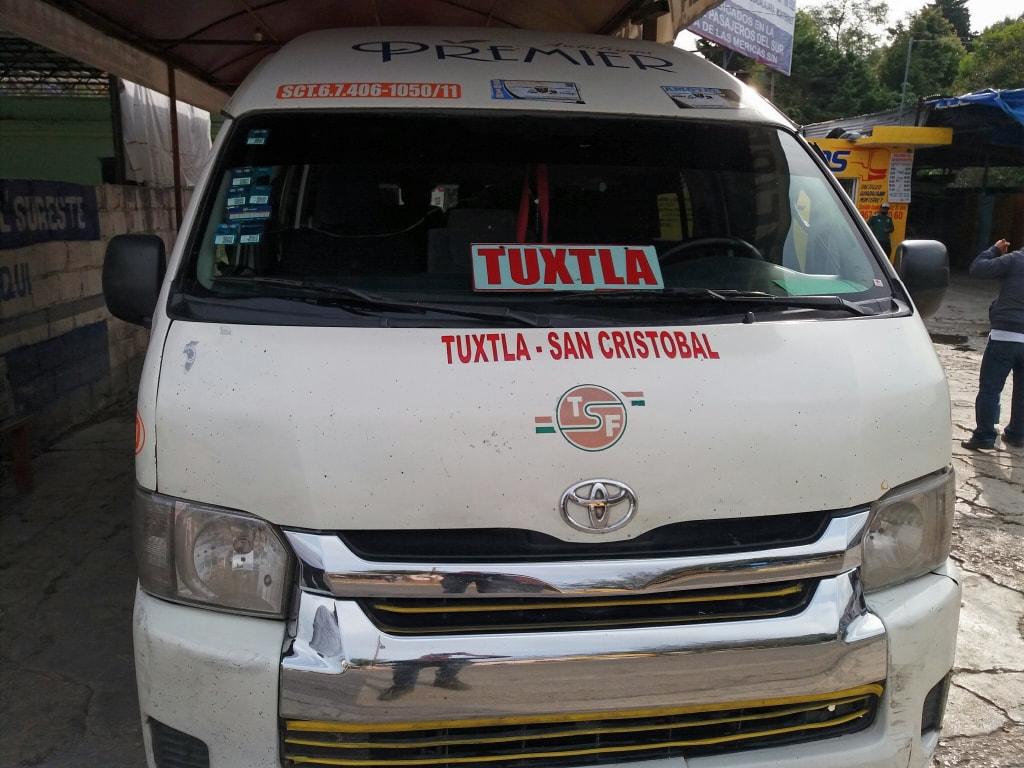 ​I asked a few drivers. The fare is 55MXN. Journey time is about an hour BUT this is dependent on the amount of traffic. Coming back it took a painful 2 hours for the 62km.

And here is a pro traveller tip. You don't have to go all the way into Tuxtla.

Near this spot:
​jump out, many people get off here, cross the carriageway and get in a Tuxtla-Chiapa colectivo.

​The fare to Chiapa de Corzo is 10MXN.

I followed the progress on GoogleMaps and got out at the nearest spot to the boat landing stage. 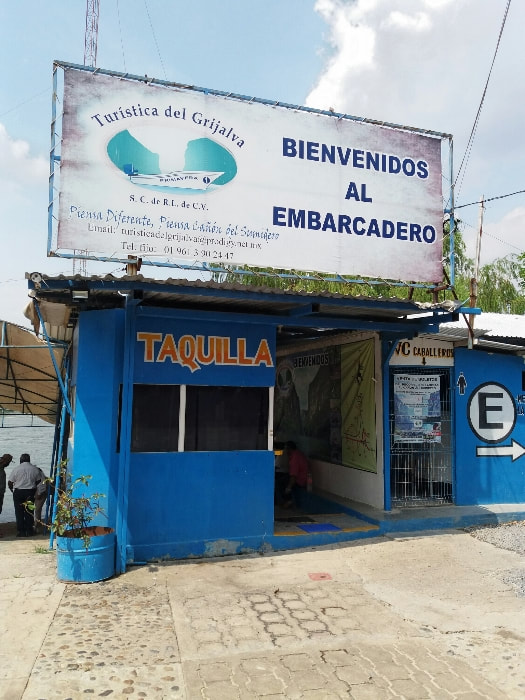 I got there at 11:15. The ticket lady quoted that it would depart in 15 minutes but in reality, we left at 12.10. The boats hold 41 passengers. They go when full, just like a colectivo.

There are a few other companies downriver too. I did not check them out. Fare is 270MXN. The trip time was 2 hours 10.

The 'tour price' in San Cristobal was 350MXN. I am told that this includes the boat ticket, which is less than I paid, going my own way. My colectivo fares mounted to 130MXN.

BUT, I cannot say if the boat ride is exactly as what I got. Maybe the ride is less. Maybe it's the same. But 50MXN gives me my freedom. It's like that many times.

It's a beautiful trip. But not all is as it seems. The Grijalva River which runs through the canyon is said to be the 5th most polluted river in Mexico. (Is this why many travellers inc me suffer from 'Chiapas belly'?

Raw sewage of 550,000 people ends up in the canyon. Plastic bottles and such like remains a problem despite the efforts to clean it up. But 80-90% of the debris in the canyon comes from illegal logging.
A little history: the main settlement of the Chiapa people was near the Canyon in Chiapa de Corzo where they resisted the Spanish invasion until 1528 and held on to an area known as the Ruins of Berlin until 1535.

It is said that the remaining people committed collective suicide by jumping into the canyon.

​Well, enjoy some of the photos from by boat ride up the Sumidero Canyon: 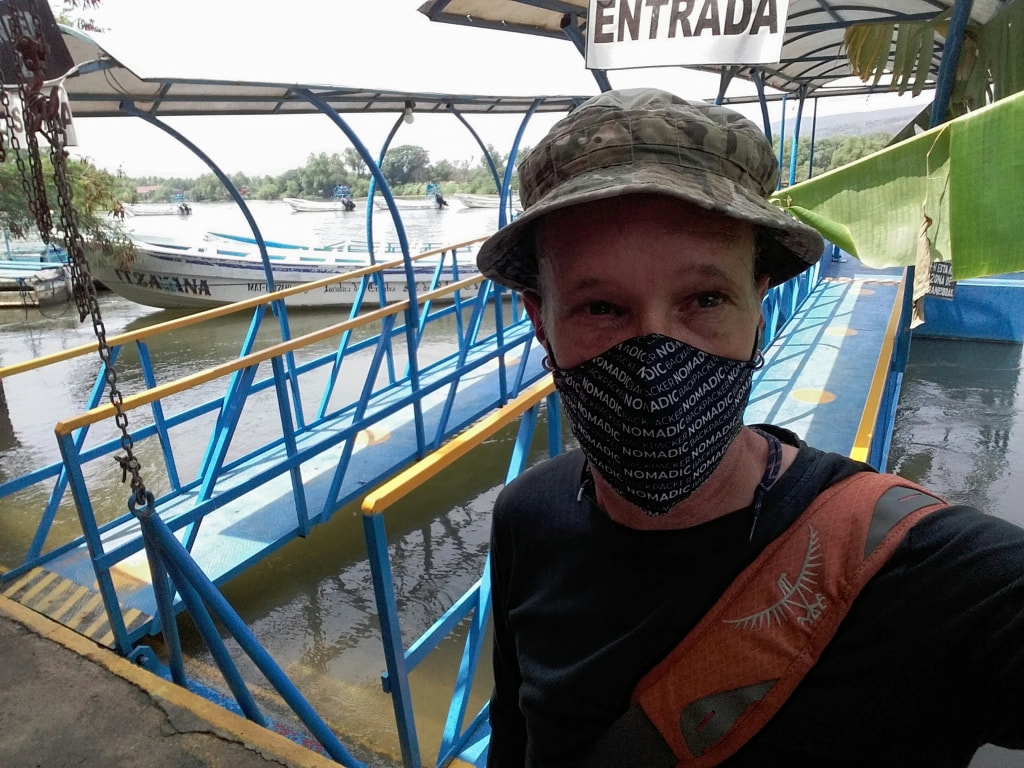 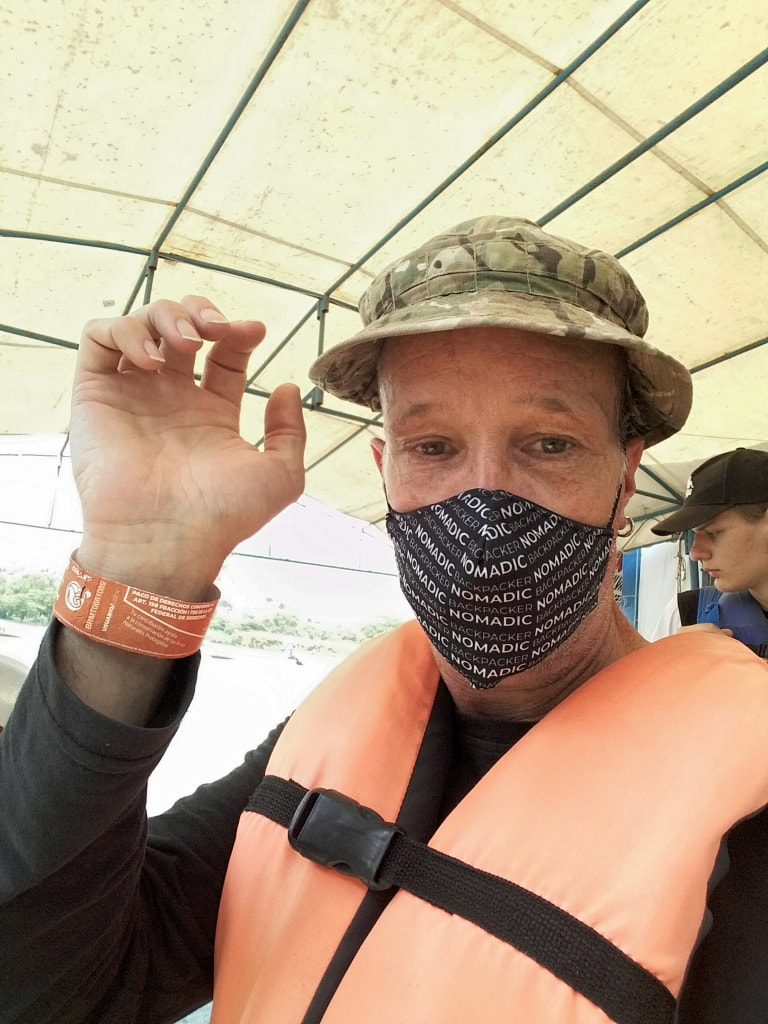 Despite looking pensive it was a great trip: 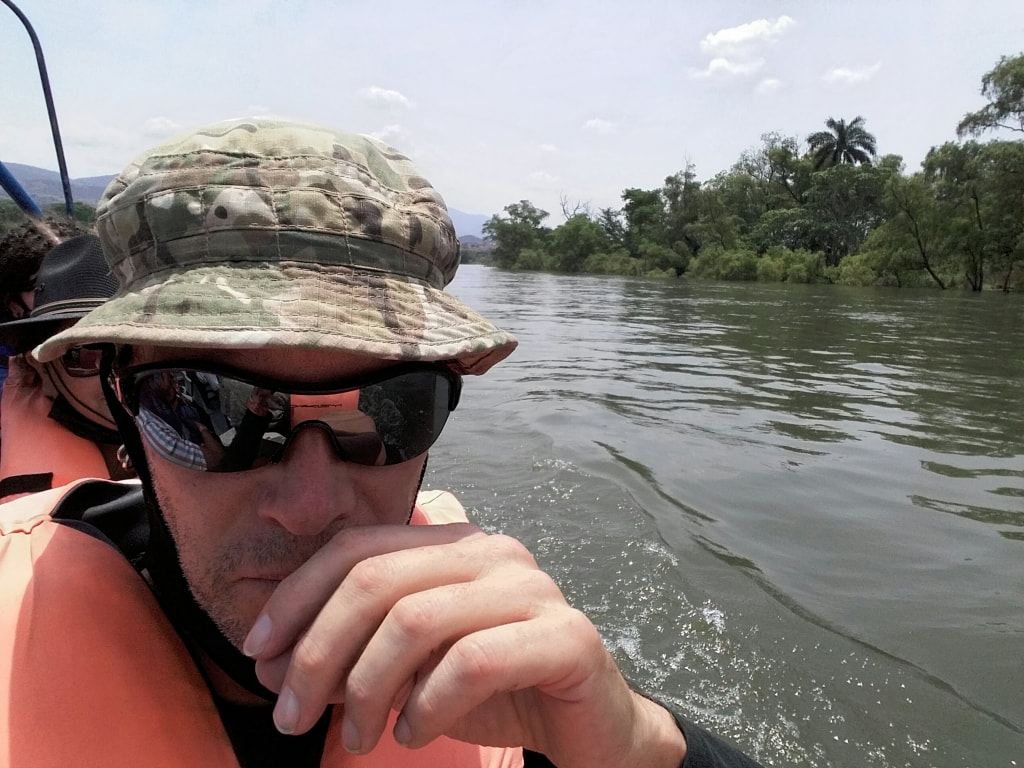 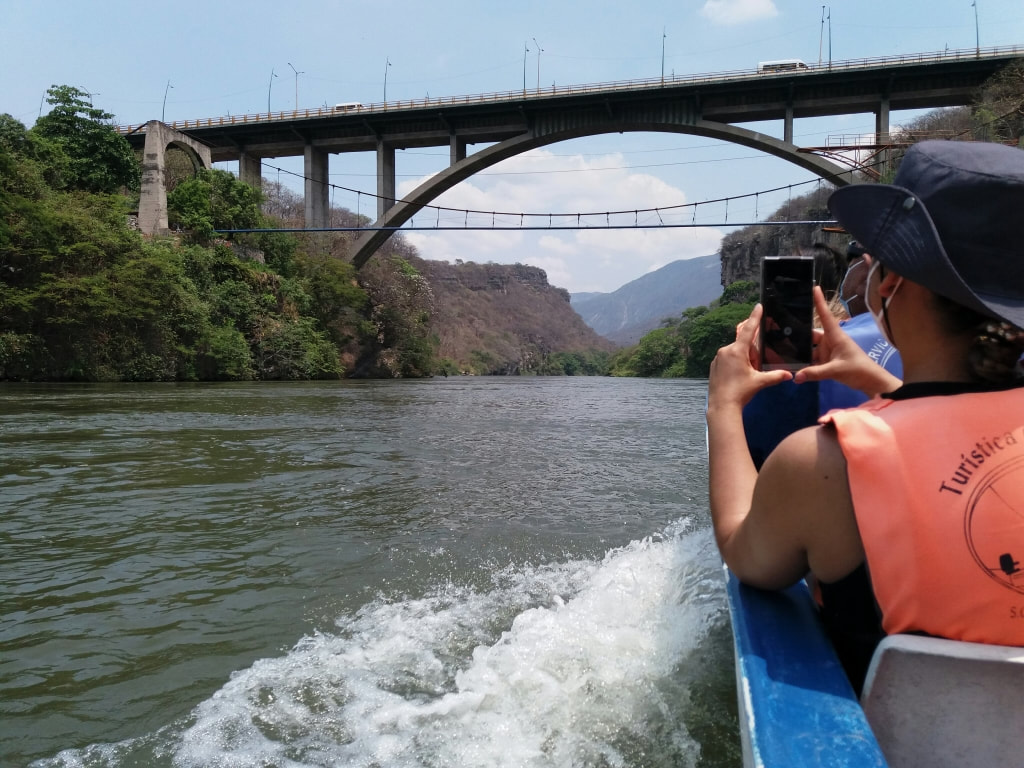 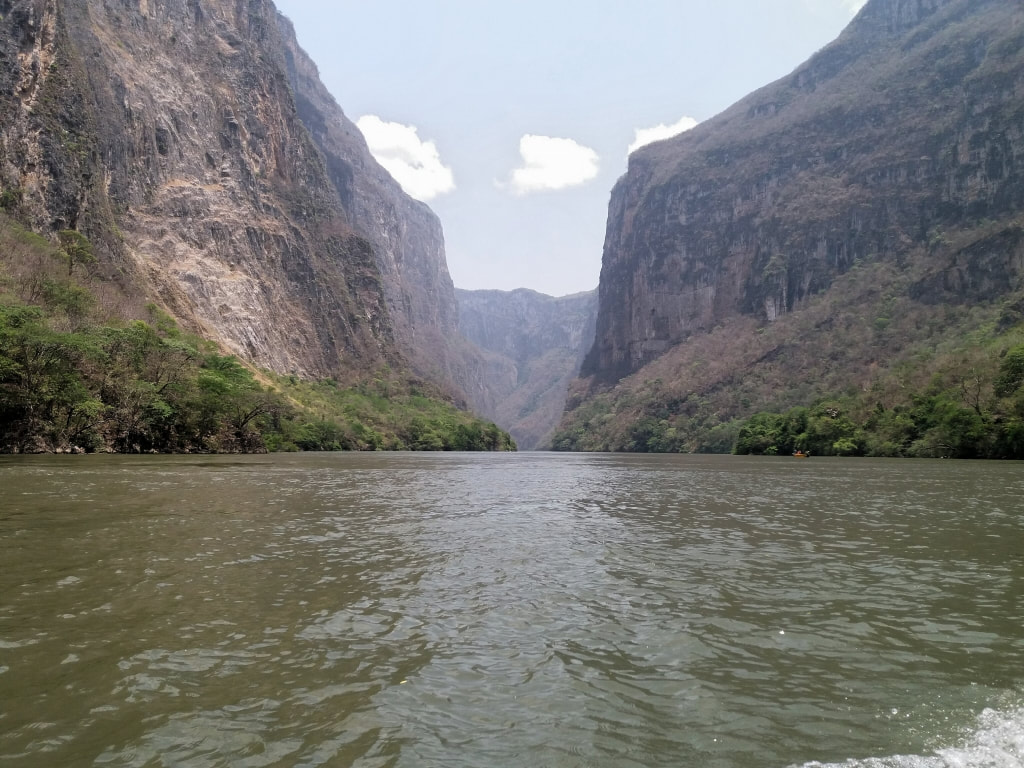 An 'American crocodile'. It's rumoured there is a plastic one. Is this the one? Cannot say! 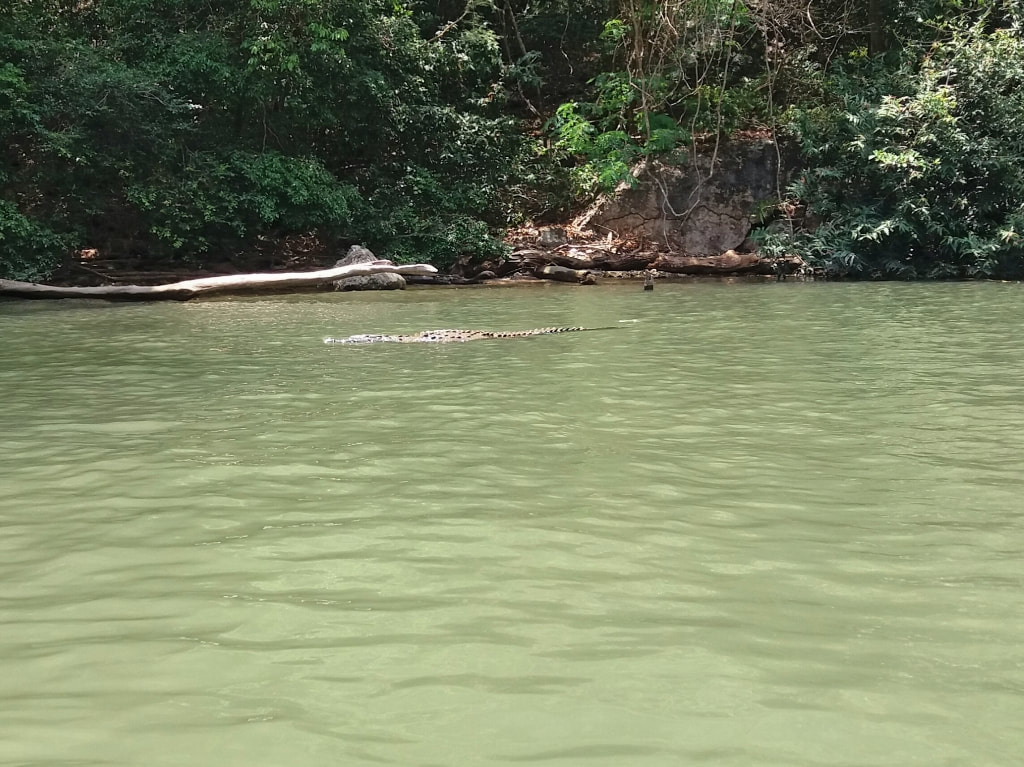 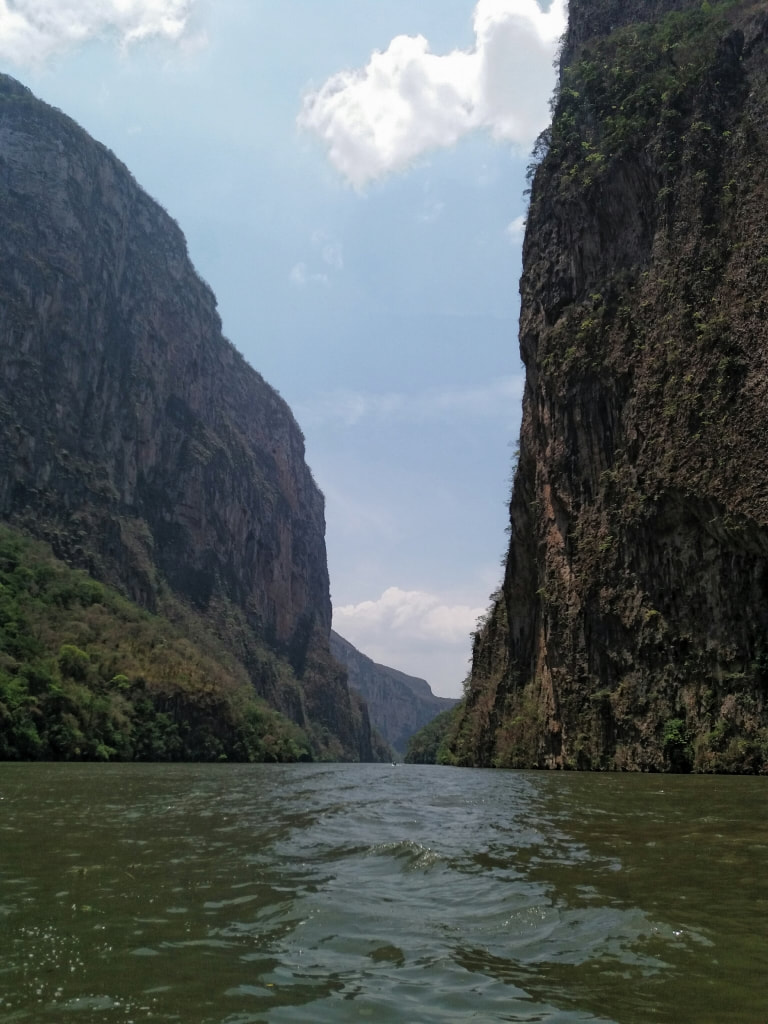 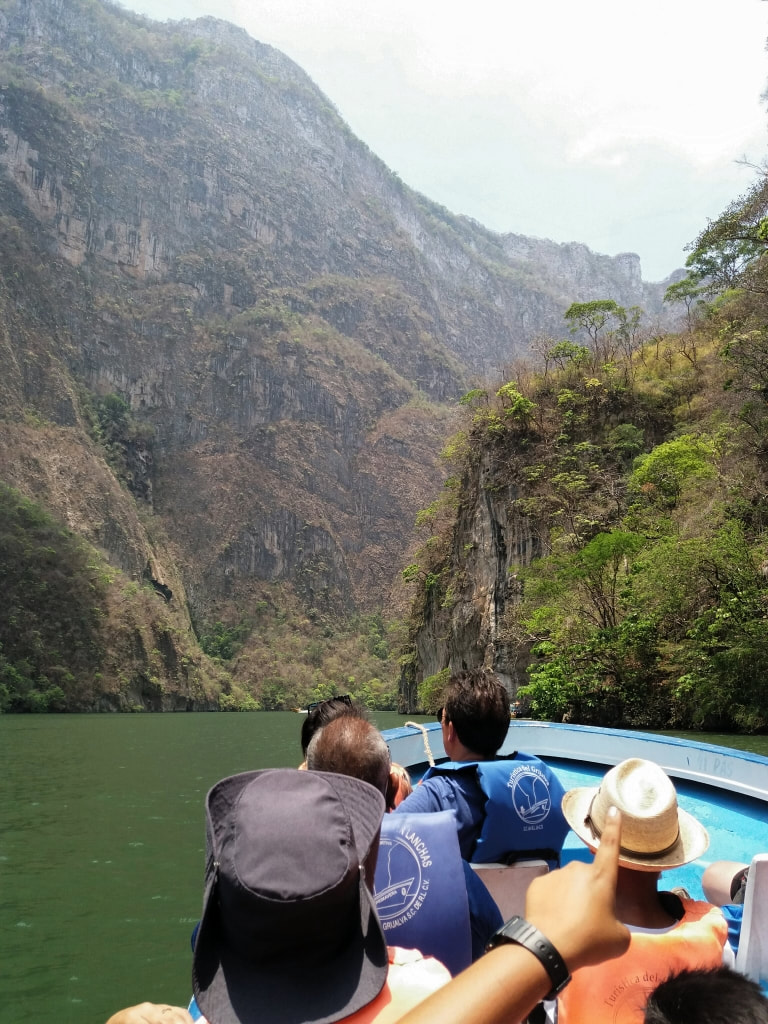 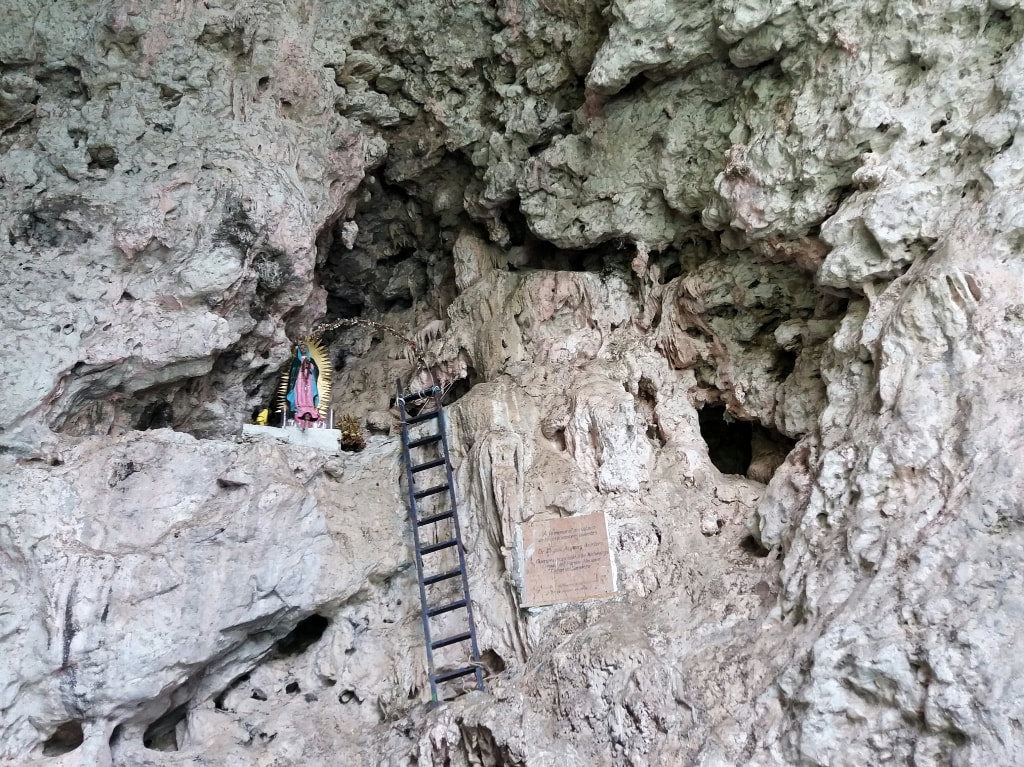 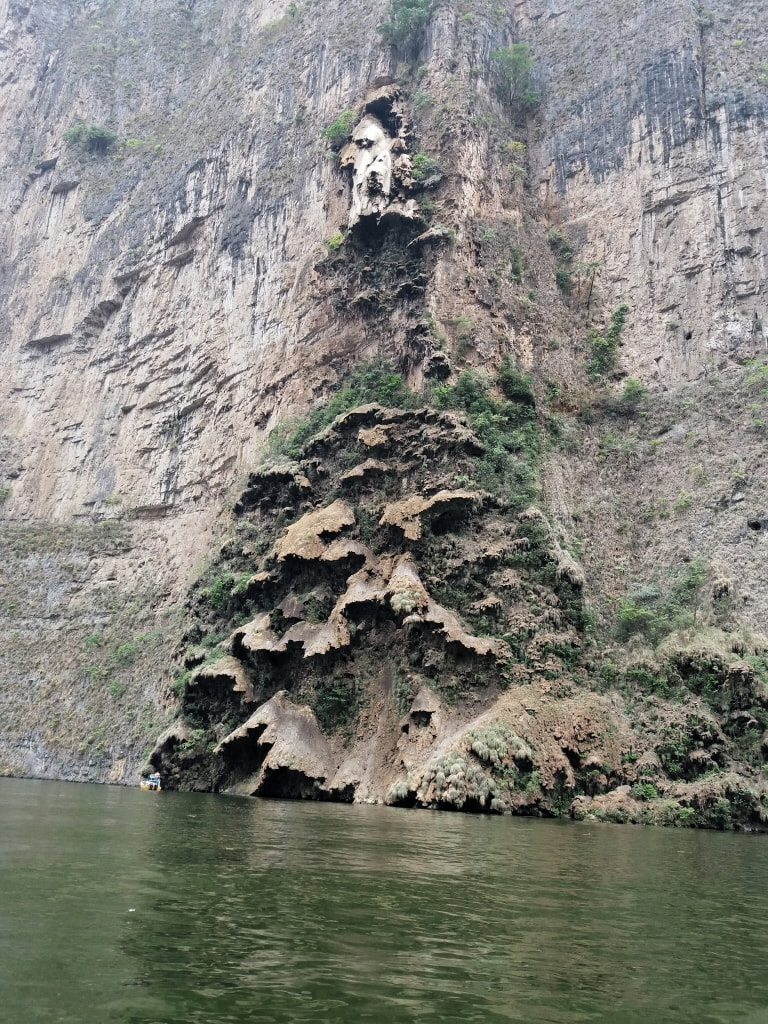 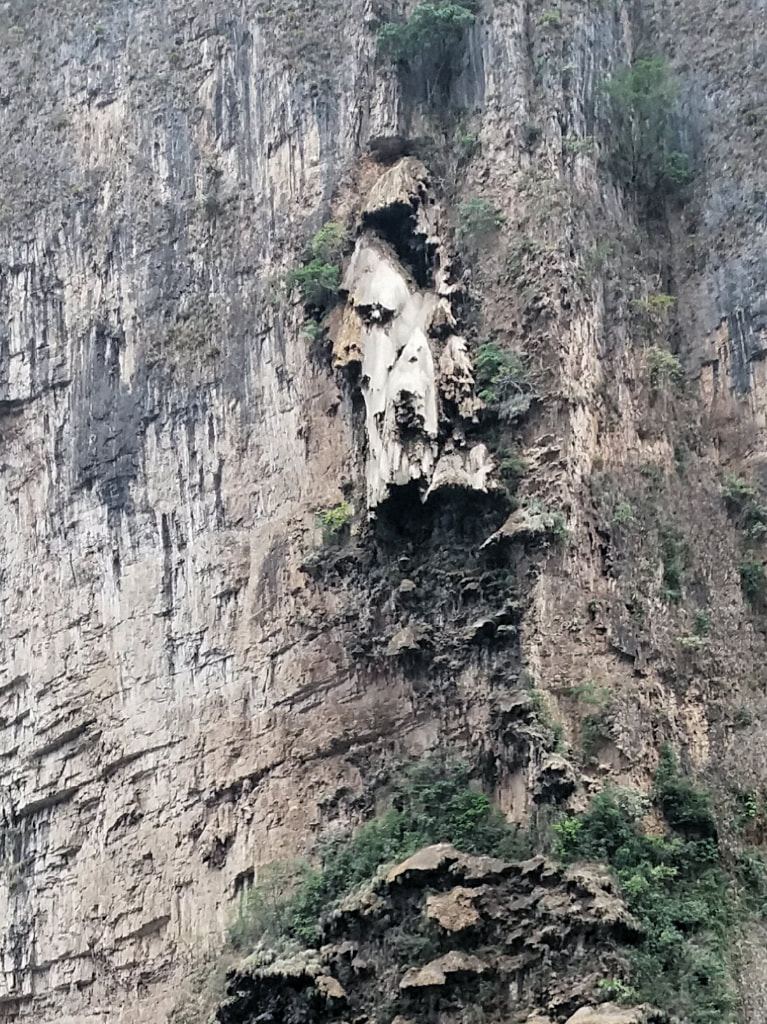 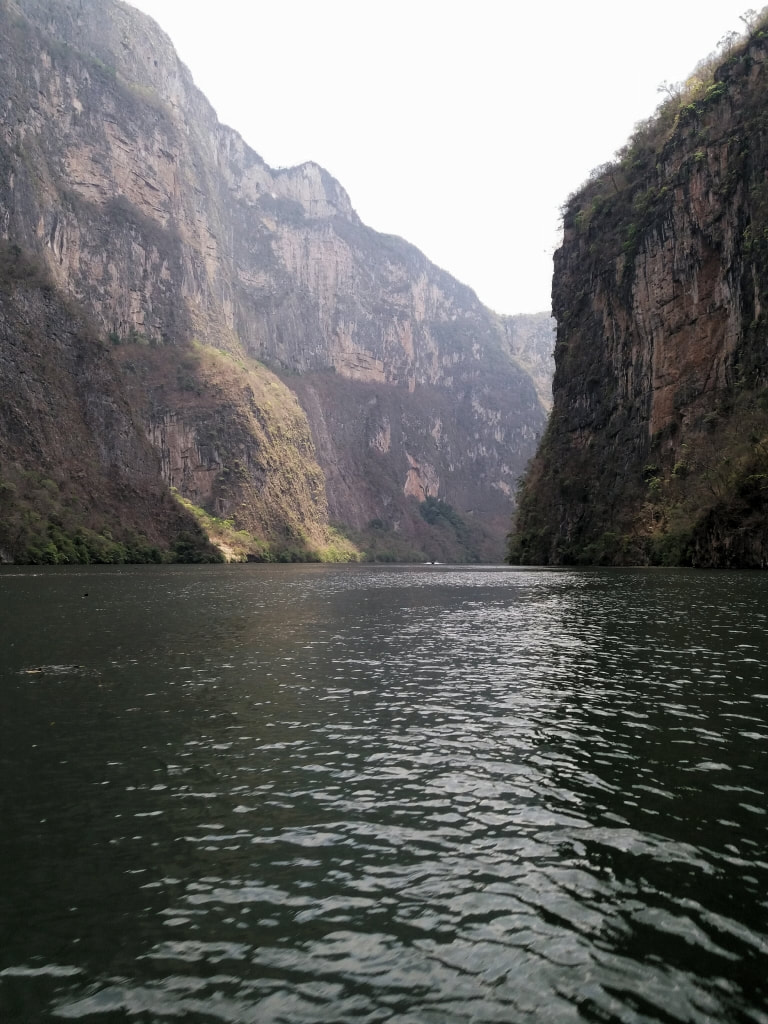 The sides of the canyon rise up to 1000m above the water: 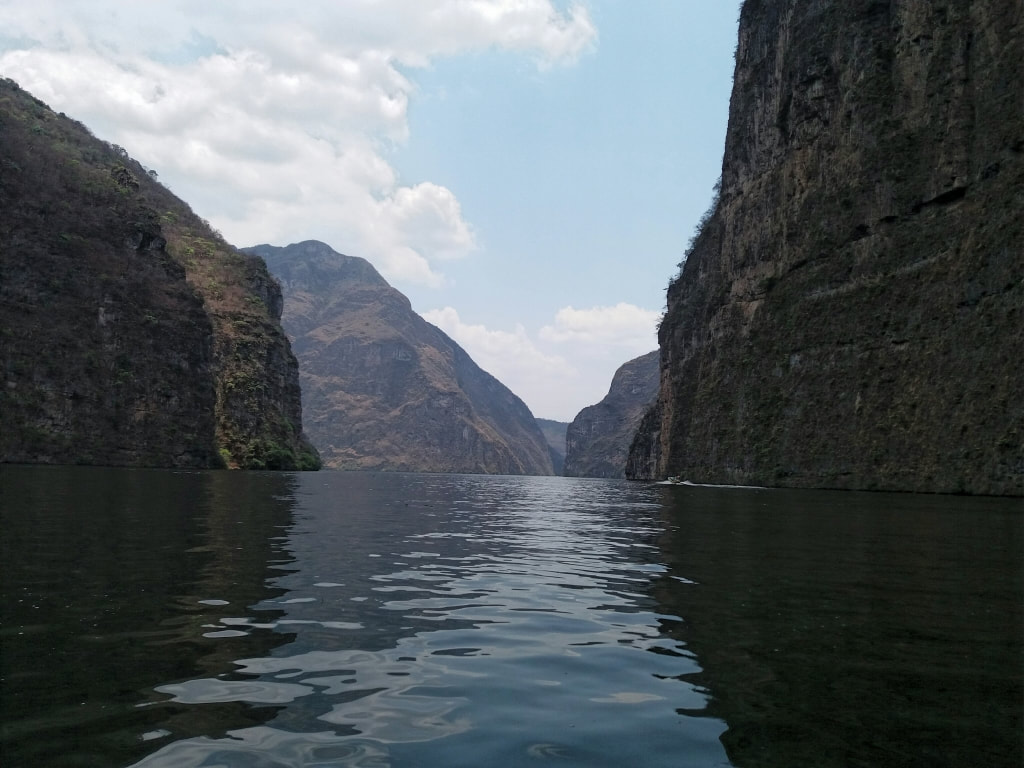 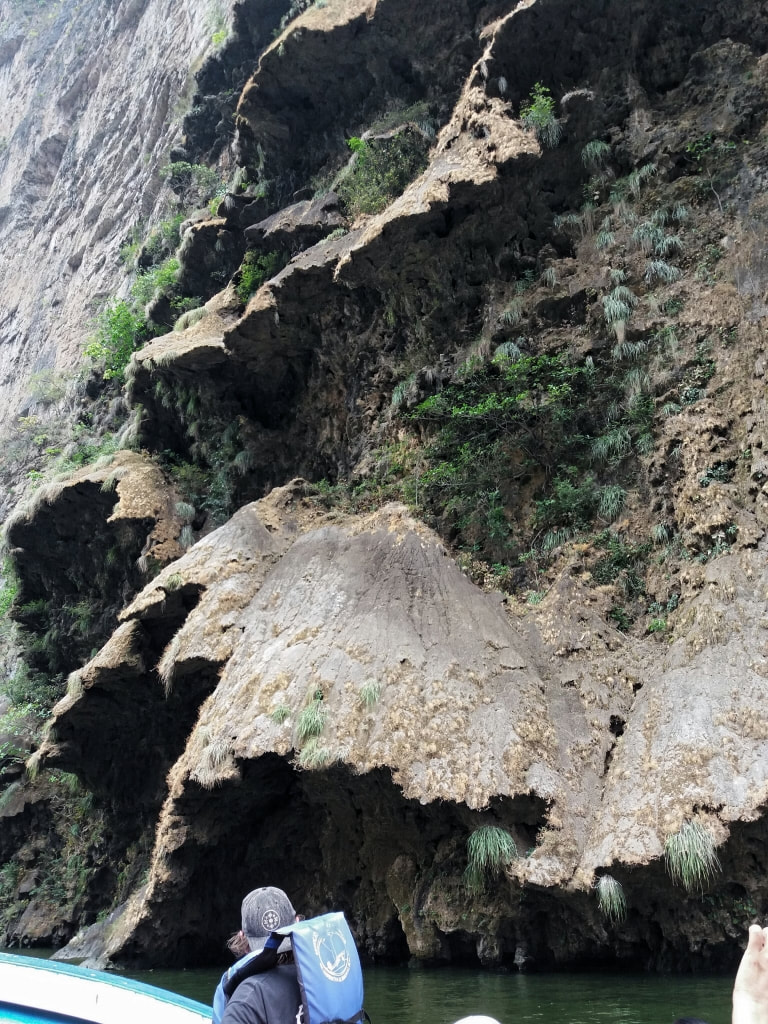 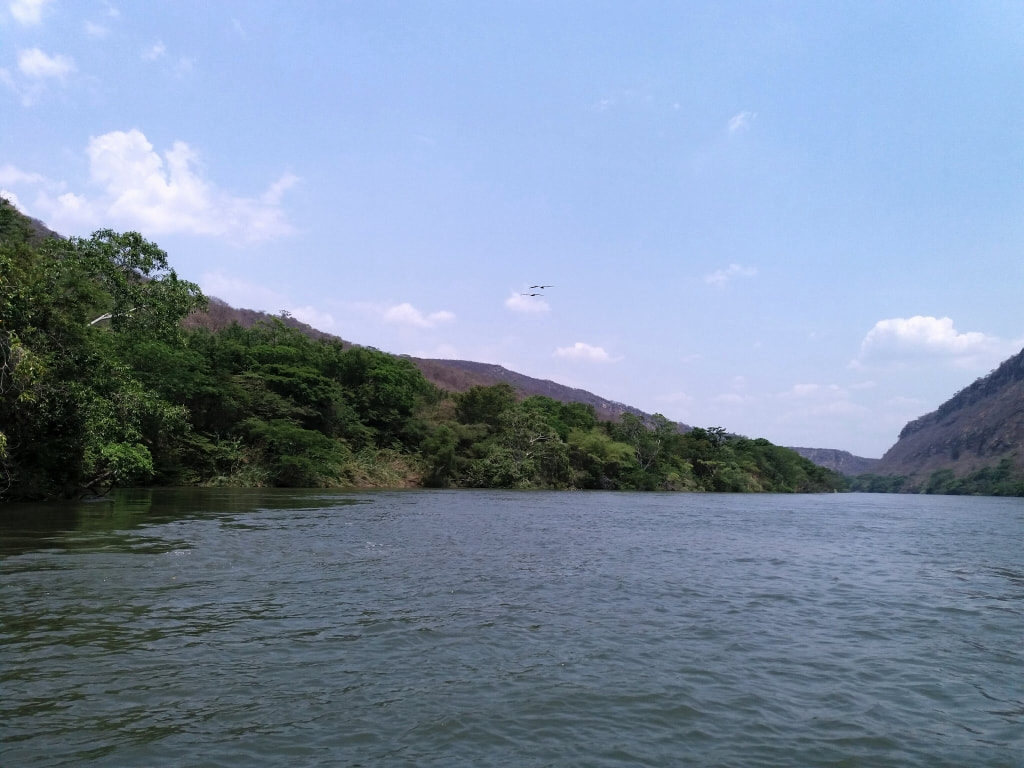 Turn around point was the Chicoasén Dam and the Hydro Electric station with provides Mexico with 1/3 of its electricity.

Once back in Chiapa de Corzo, I backpacked the town. Sadly the Exconvento de Santo Domingo, the Ruinas del Templo de San Sebastian and the Zona Arqueológica de Chiapa de Corzo were closed. It seems that across Mexico sites that are free remain closed. Mueums and sites such as Monte Alban and Mitla which charge a fee are open. I update GoogleMaps!

Pro traveller tip: Chiapa de Corzo is at 420m asl (San Cristobal is 2250m), it is extremely hot. Temperatures hit 36 deg C the day I went, with 77% humidity. Take precautions. Drink, wear a hat and sunglasses, the sun is fierce!