Visiting Tepoztlán as a day trip from Mexico City

Tepoztlán is famous for the El Tepozteco temple situated on Tepozteco Mountain. 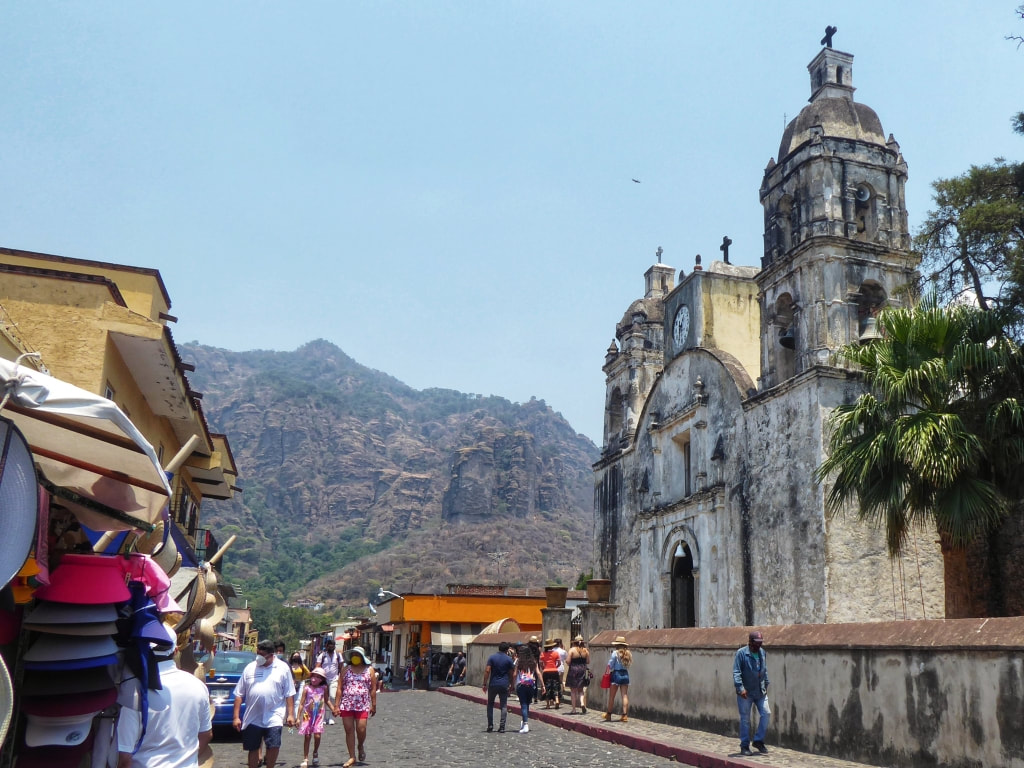 We were up super early, leaving home at 6.45 am to get the 08:20 bus, yes, the metro ride took 1 hour involving 2 changes but by 9.45 am we were in Tepoztlán and then a 20 minutes walk to town.
​
First stop was the Mercado de Tepoztlán for café de olla (cinnamon) and 'itacates', a variation on the more widely known quesadillas and tlacoyos ​stuffed with pumpkin flower, potato, colorines, cheese and epazote: 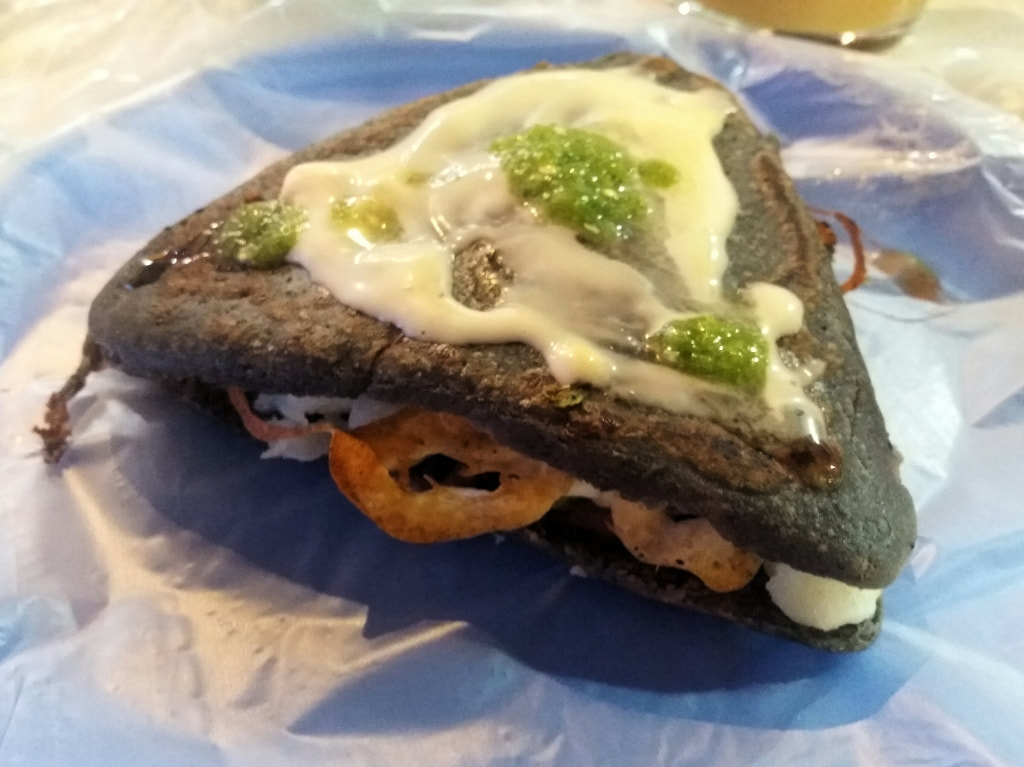 Suitably sustained we headed through the cute cobbled streets toward the Tepozteco Mountain and the archaeological site of El Tepozteco: 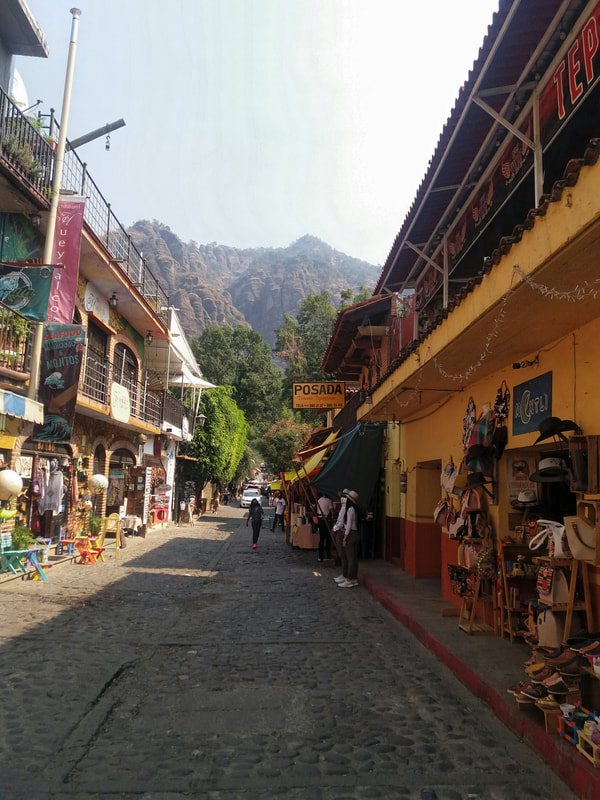 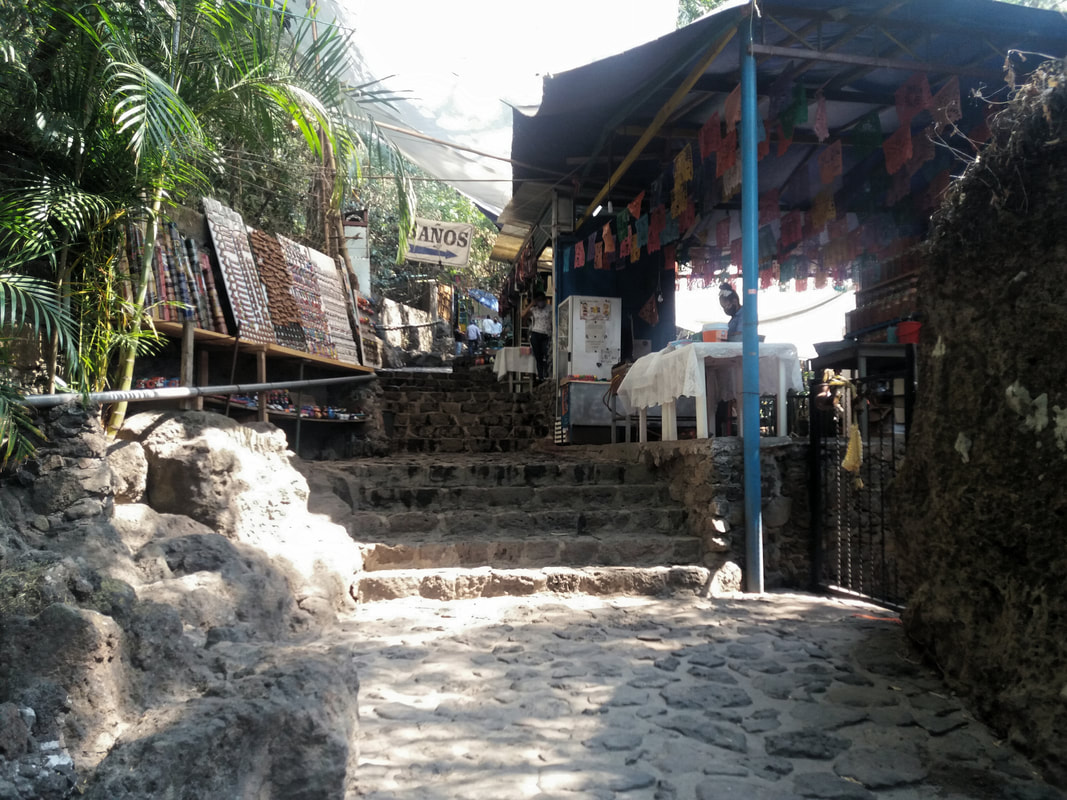 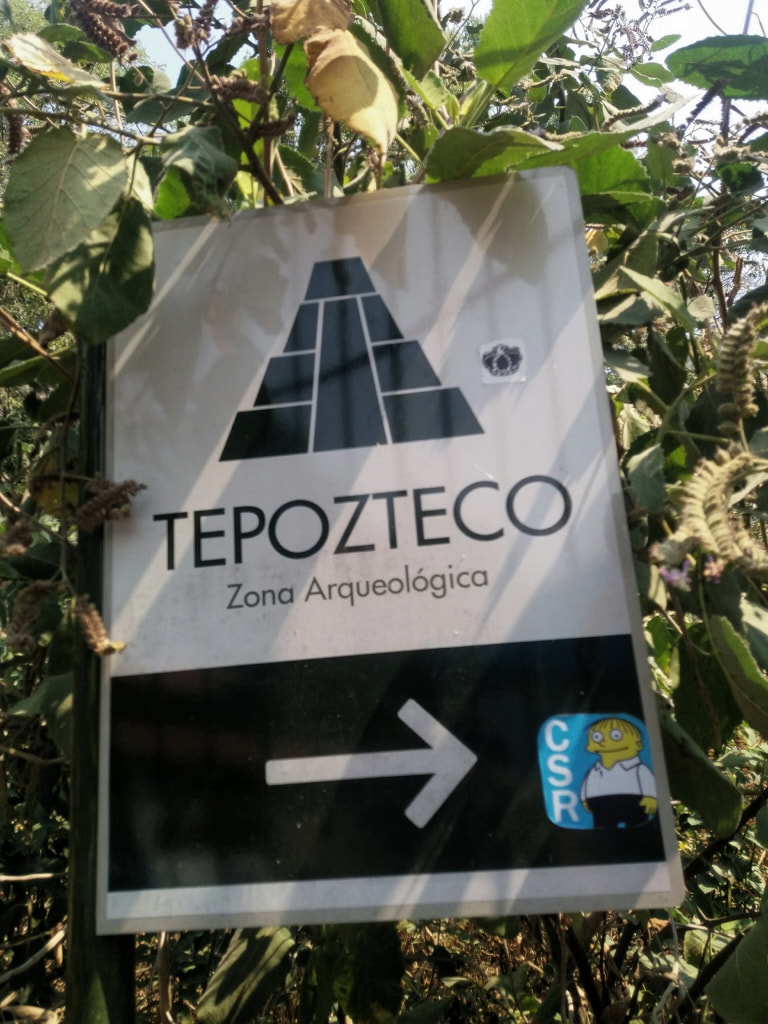 El Tepozteco on Tepozteco Mountain is 350m above town. Start early, take lots of water and wear suitable shoes. Be grateful for the shade on the lower slopes. Stop frequently to look back towards town and curse your bad condition courtesy of Covid-19 lockdowns and a few too many beers: 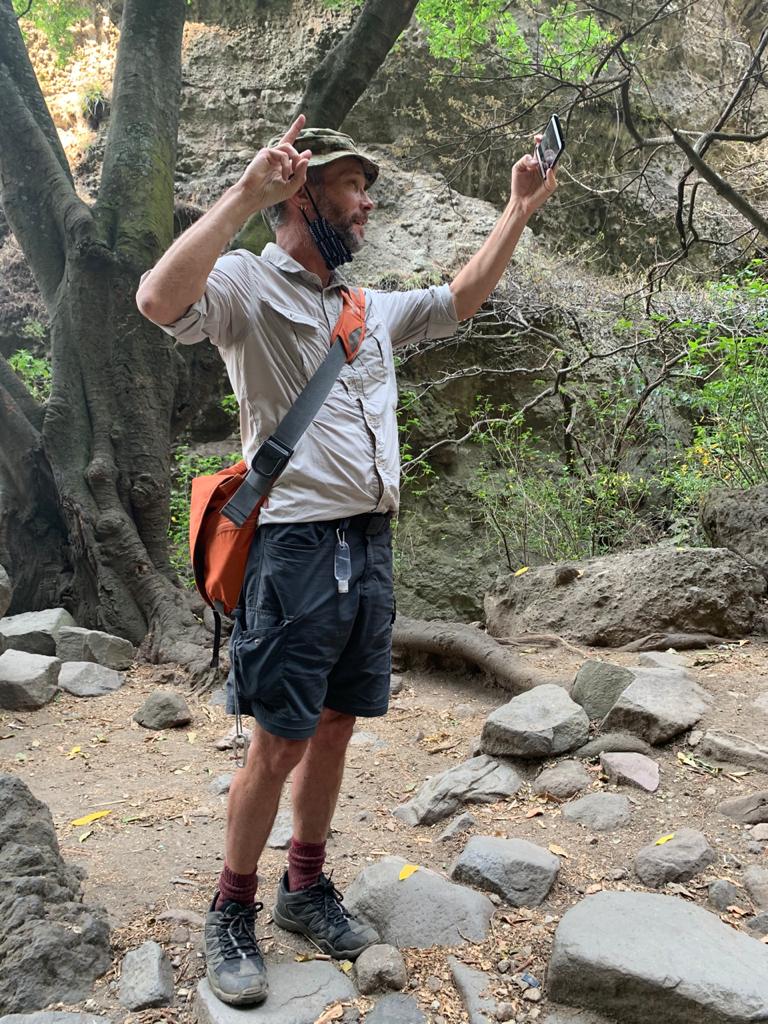 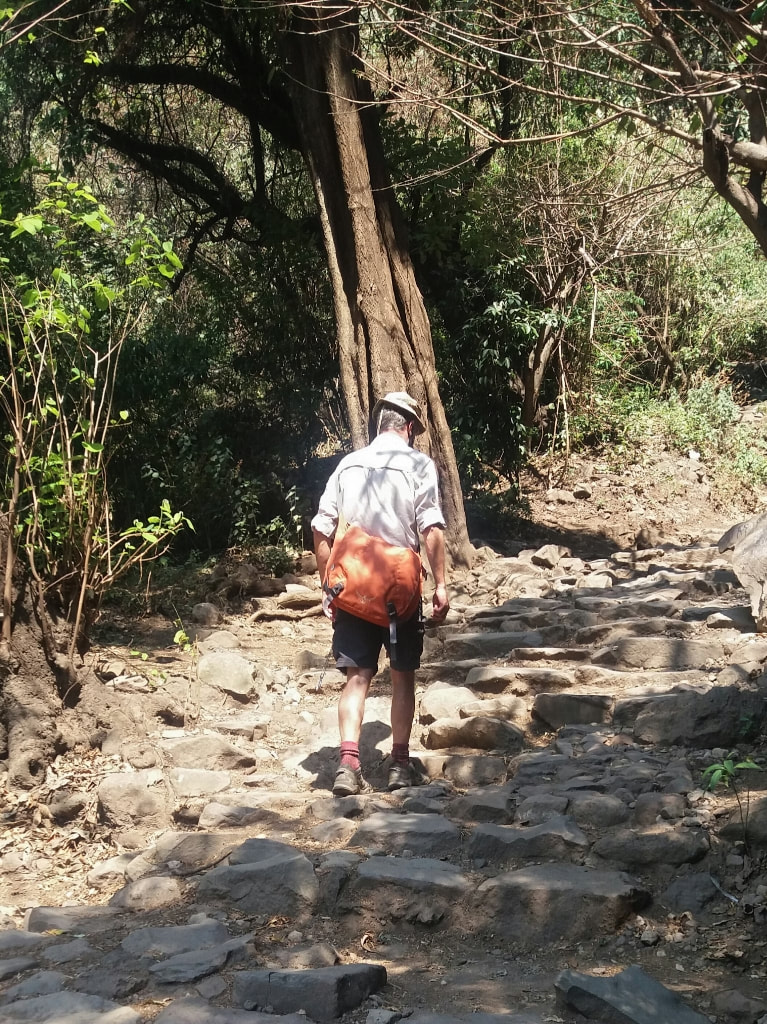 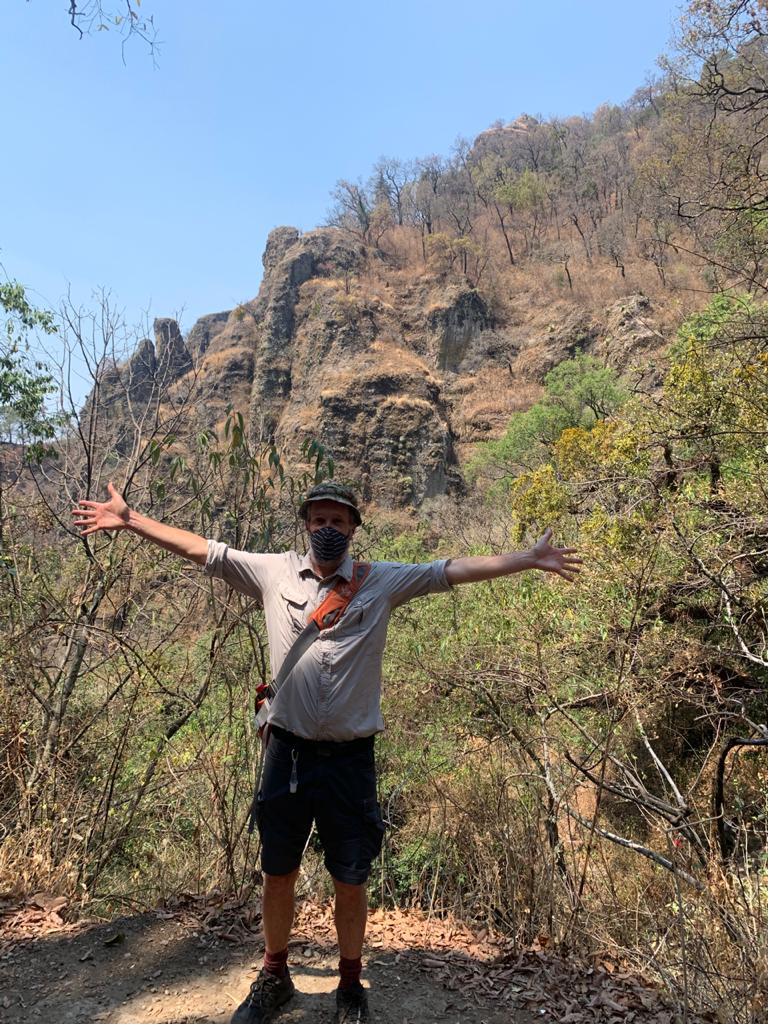 We weren't prepared for this: 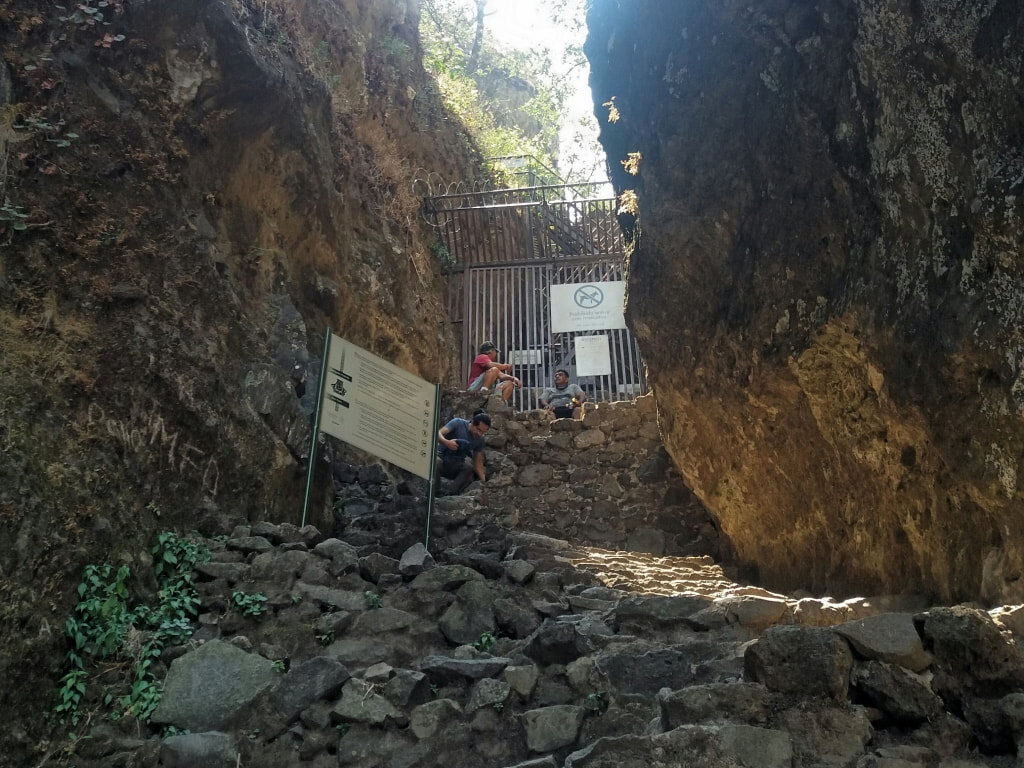 There had been no notification of the park being closed despite having passed through a sanitiser check-point manned by humans. Quite the disappointment.

The site has been closed since the beginning of the pandemic and is yet to reopen.

El Tepozteco is a small temple dedicated to Tepoztēcatl, the Aztec god of the alcoholic drink 'pulque'

The Legend of Tepozteco:

Over the years the legend of the Tepozteco has been told that tells the story of a maiden who used to bathe in the Atongo canyon. In those days it was said that the ravines gave off "airs", which the young woman did not believe and after a short time she noticed that she was pregnant.

The maid appeared before her parents announcing, embarrassed, her pregnancy. After the child was born, the grandfather made several attempts to get rid of it. On one occasion he threw it from a great height against some rocks, but the wind returned the baby to the plain. At another moment, they abandoned him in the middle of some magueys but at the time, the leaves were bent until they reached his mouth to feed him with mead. In a last test, the infant was stranded in the nest of some giant ants that instead of devouring it, they brought food to it. In this place of abandonment, an elderly couple found the baby, adopted him and named him Tepoztécatl, who would be the future patron of Tepoztlán.

Near the home of Tepoztécatl lived Mazacuatl, the dreaded serpent of Xochicalco, to whom the settlers gave to the elderly as a sacrifice.

One day, the village leaders announced the sacrifice of Tepoztécatl's adoptive father, he took the place of his father and decided to give himself to the serpent. As he walked towards the cruel fate, he collected pieces of obsidian that he kept on his clothes. Once he was in front of Mazacuatl, she devoured him without hesitation.

When Tepoztécatl was in the belly of the reptile, he used the pieces of obsidian to tear the belly of the animal. As he walked back to his house, he passed through a celebration in which they used drums and flutes; The boy, listening to the sweet melodies, wished he could play the instruments and when he was unable to do so, he sent a storm that threw sand into the eyes of all those gathered there; When they were finally able to regain their sight, Tepoztécatl had already retired taking those instruments with him, the musicians chased him and when they were about to reach him, the little boy urinated, thus forming the throat that crosses Cuernavaca.

When the boy reached Tepoztlán, he seized the highest hills, perching on the Ehecatépetl; as they could not reach it due to the height, they made some cuts in the base trying to knock it down, from here the air corridors were formed.

Tepoztécatl enjoyed the favor of his native town and was designated as the Lord of Tepoztlán and priest of the rabbit god. However, he disappeared only two years later, no one knows his whereabouts but many say that he decided to live next to the pyramid for the rest of the sunrises.

Note: this has been translated from an information banner in town.

Caution: The rocky path can be slippery in places. Take good care on the descent.

Back in town we needed liquid refreshment, Google said that it was 31 deg C but the wind was blowing hot. 35 deg C would be a better guess: 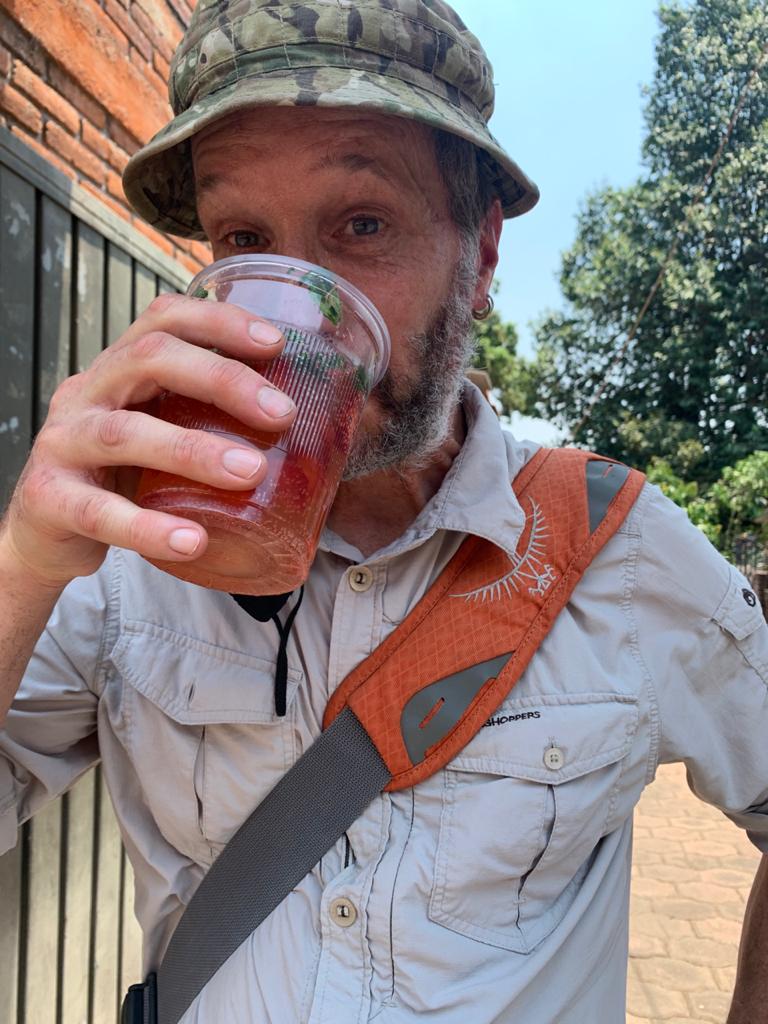 Places to eat or drink in town were a bit limited. And when we found a place, you needed to order food to accompany your beer, yes this is the only really stupid covid rule that Mexico imposed.

​But we found one place eventually who refrained from mentioning the food rule but we had to endure the bad music provided, from 2 different speaker systems and we were kinda halfway between the 2: 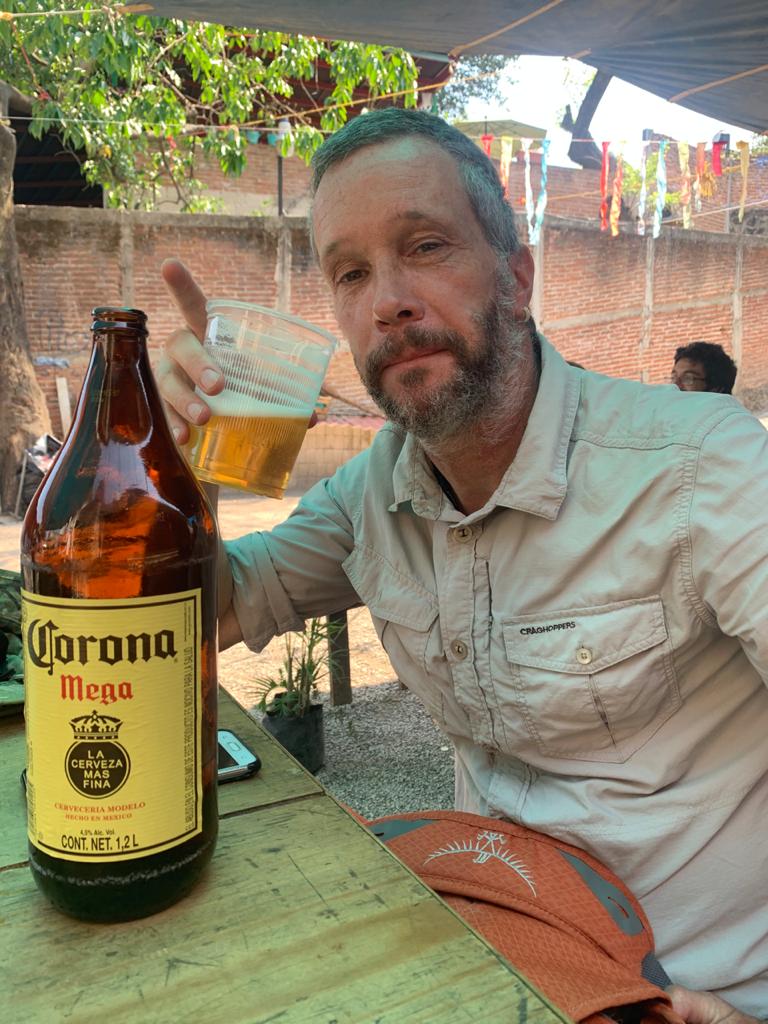 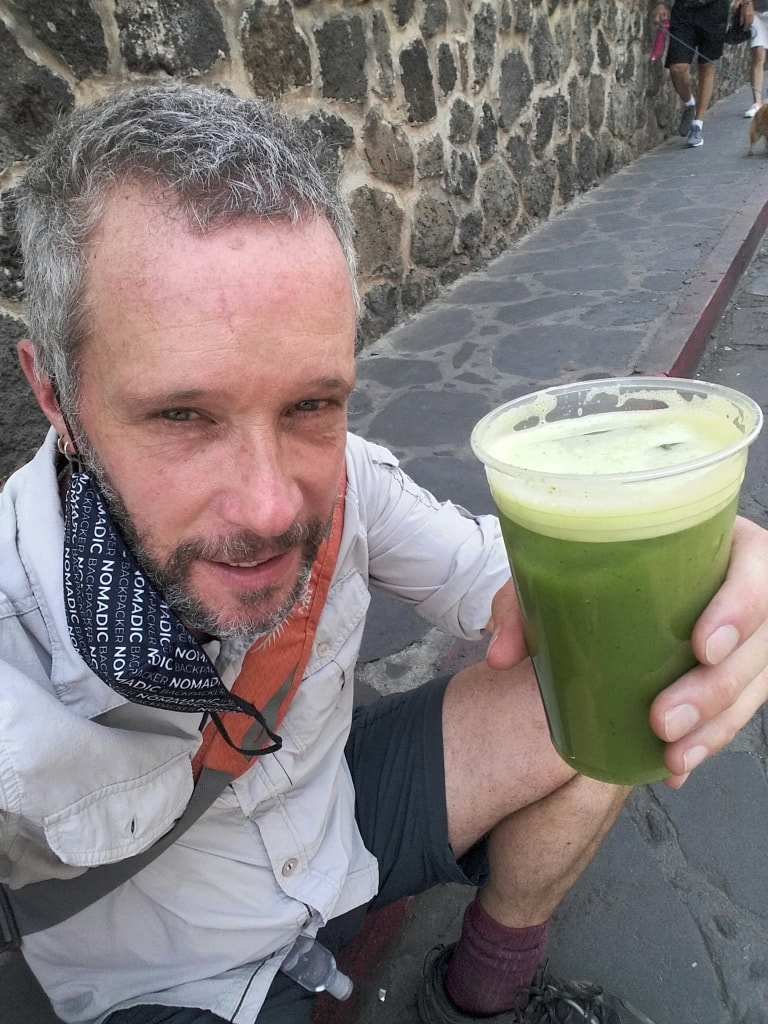 Rehydrated we backpacked the town of Tepoztlán. The streets can be steep. The sun was beating down and there was only a hot wind blowing. We clocked up a massive 26.3km for the day. 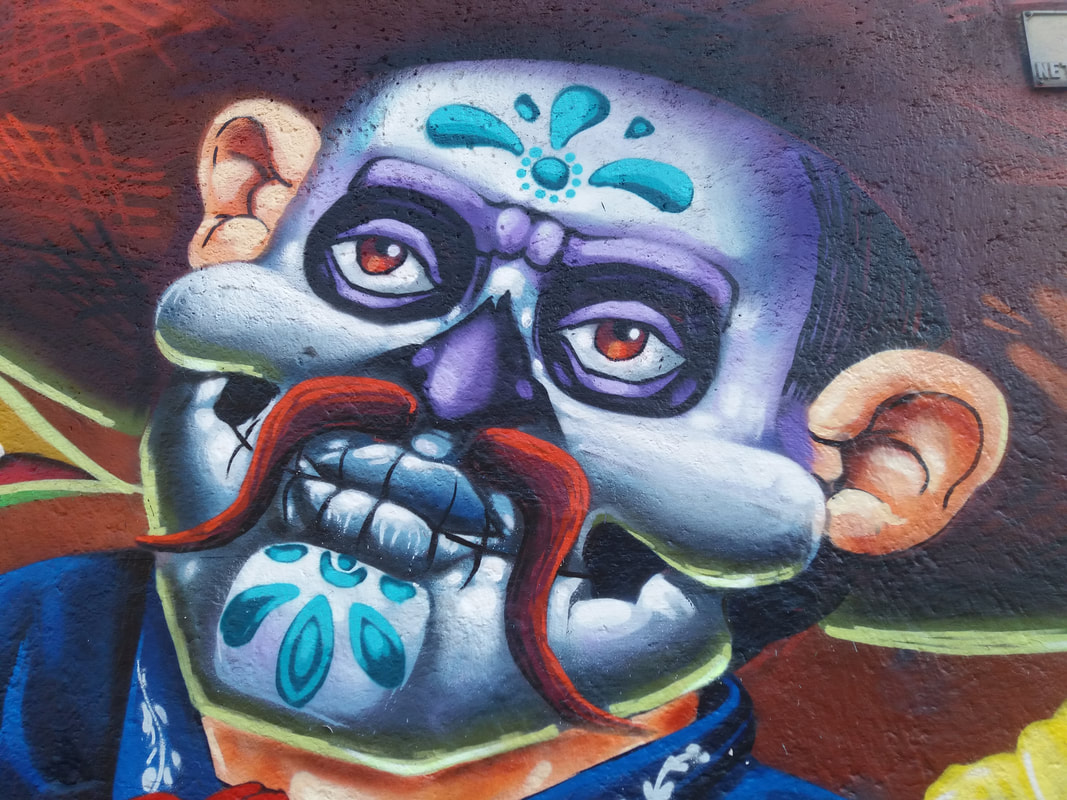 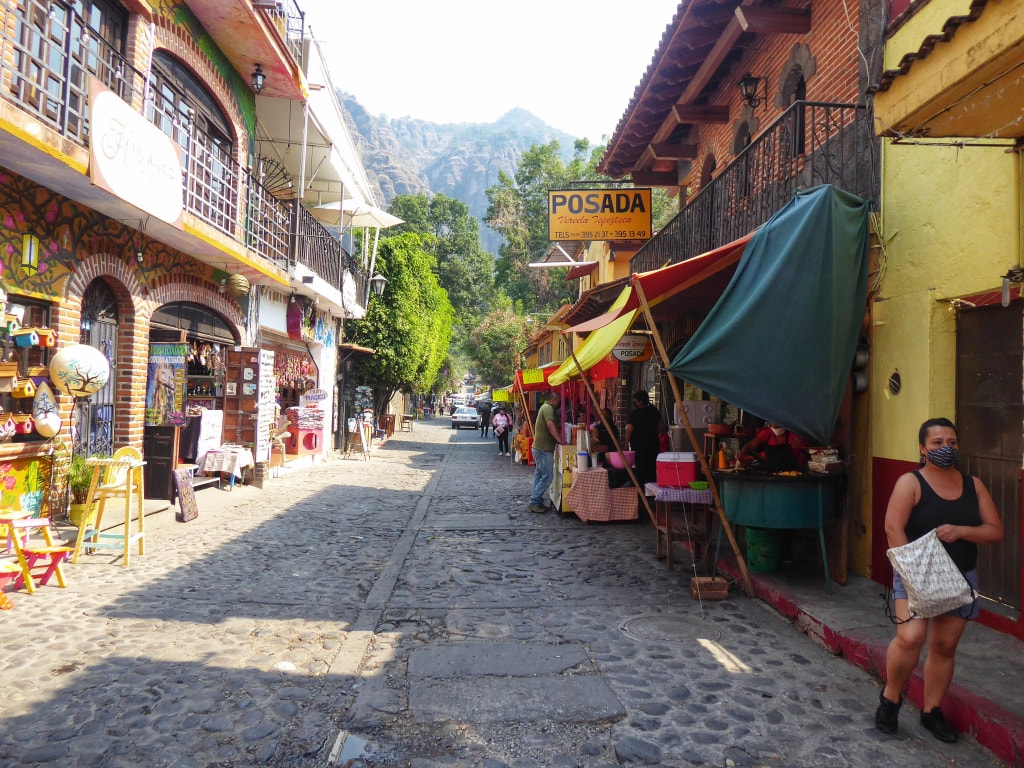 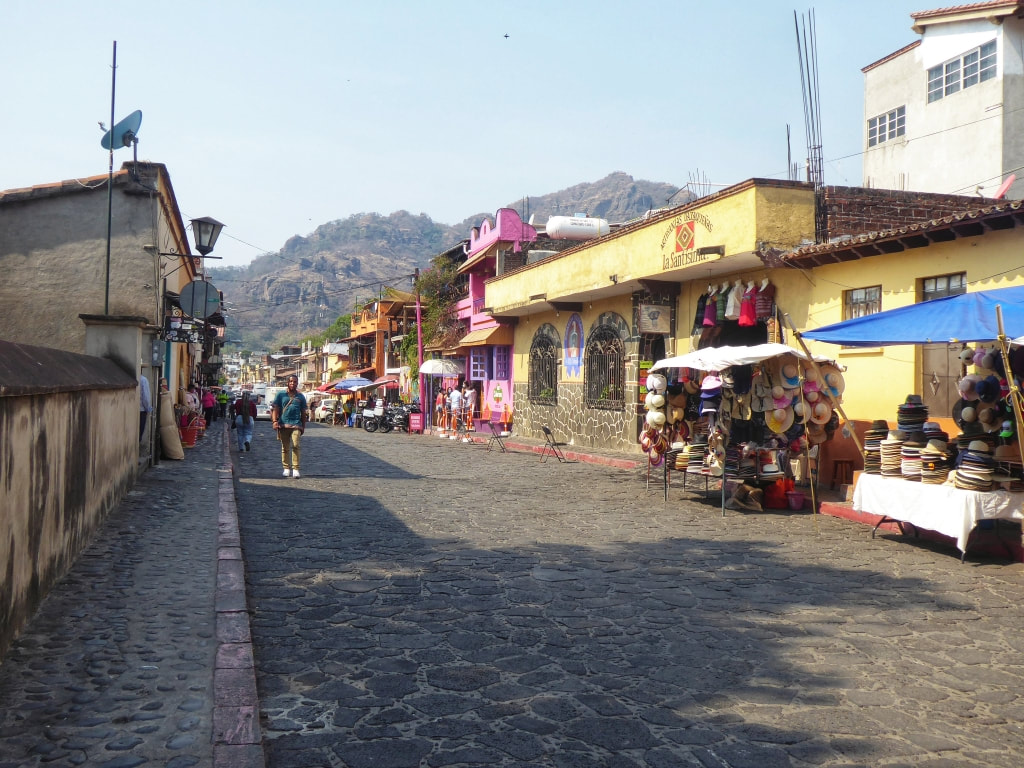 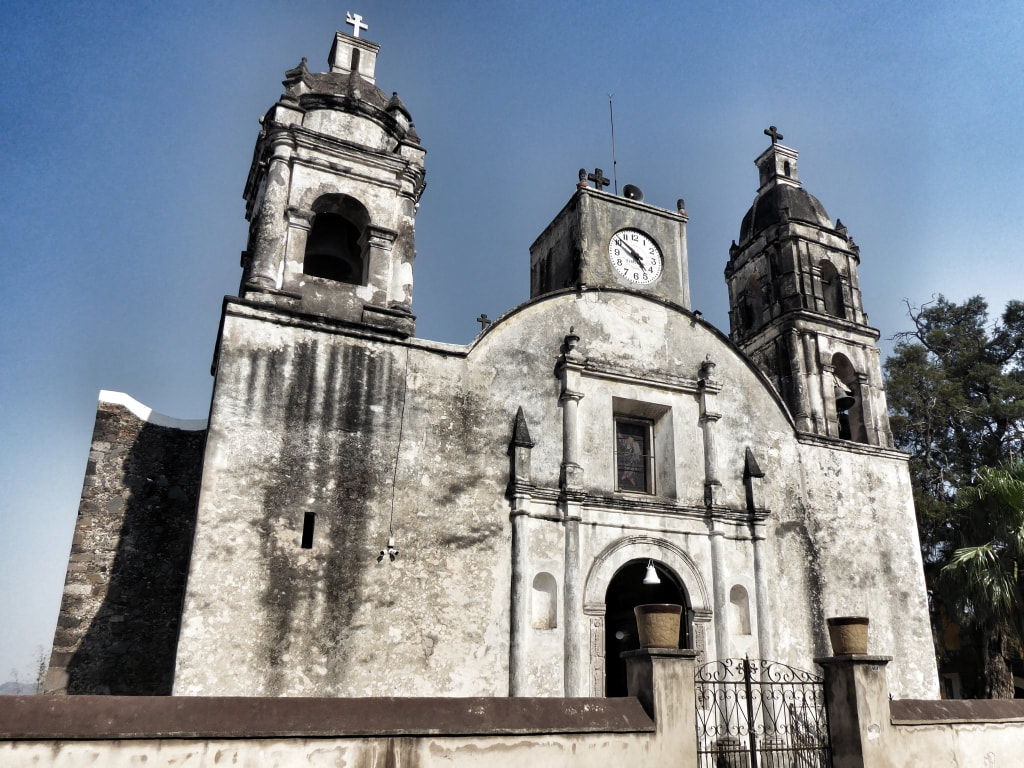 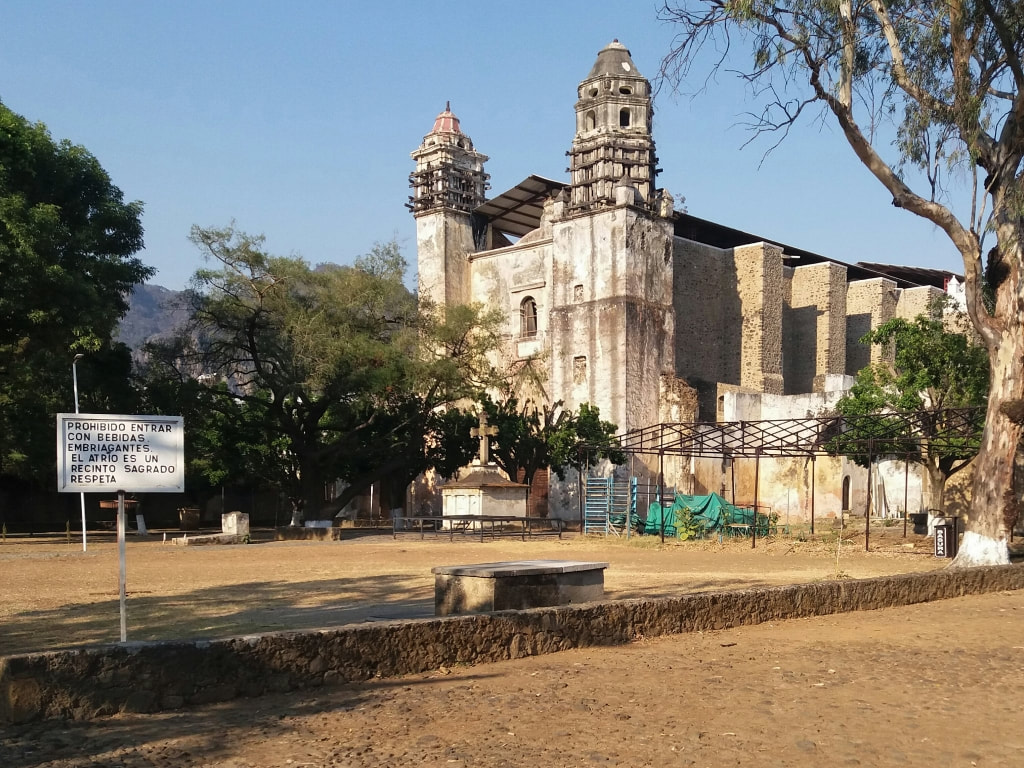 How to get from CDMX to Tepoztlán:

We rode the CDMX Metro to Tasqueña, the last stop on linea 2, which is next to the Terminal Central del Sur from where regular buses run to Tepoztlán. 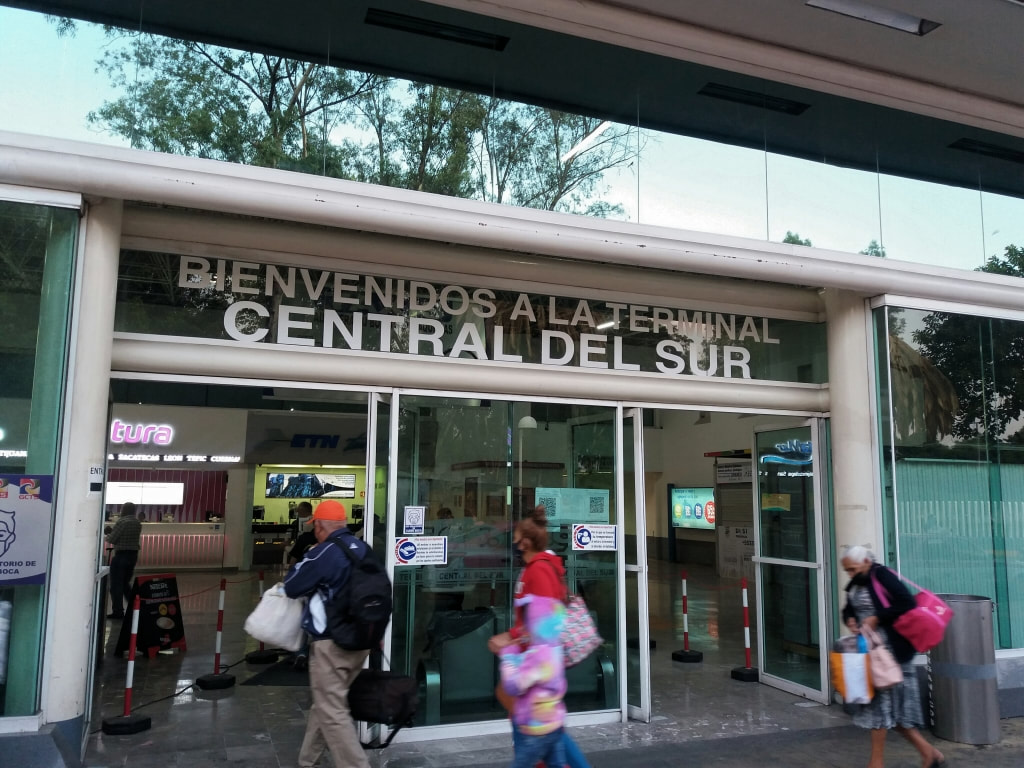 ​We booked 2 tickets the day before through ClickBus. The regular fare is 140MXN and online there were a limited number of tickets going for 127MXN. The buses are AirCon and very comfortable. Journey time is 1hr 10 minutes.
​
Coming back we had booked the 20:35 but were at the bus station just before 20:00 and we managed to change our tickets for the 20:05. The journey back was just 1 hour.