November 30 2020 | Tagged: Turkey
Şanlıurfa, or just Urfa as it is commonly known as, is pretty far off the tourist trail. It is a multiethnic city with a Turkish, Kurdish and Arab population, 54km north of the Syrian border at Akçakale, and at best 1,280km from Istanbul. 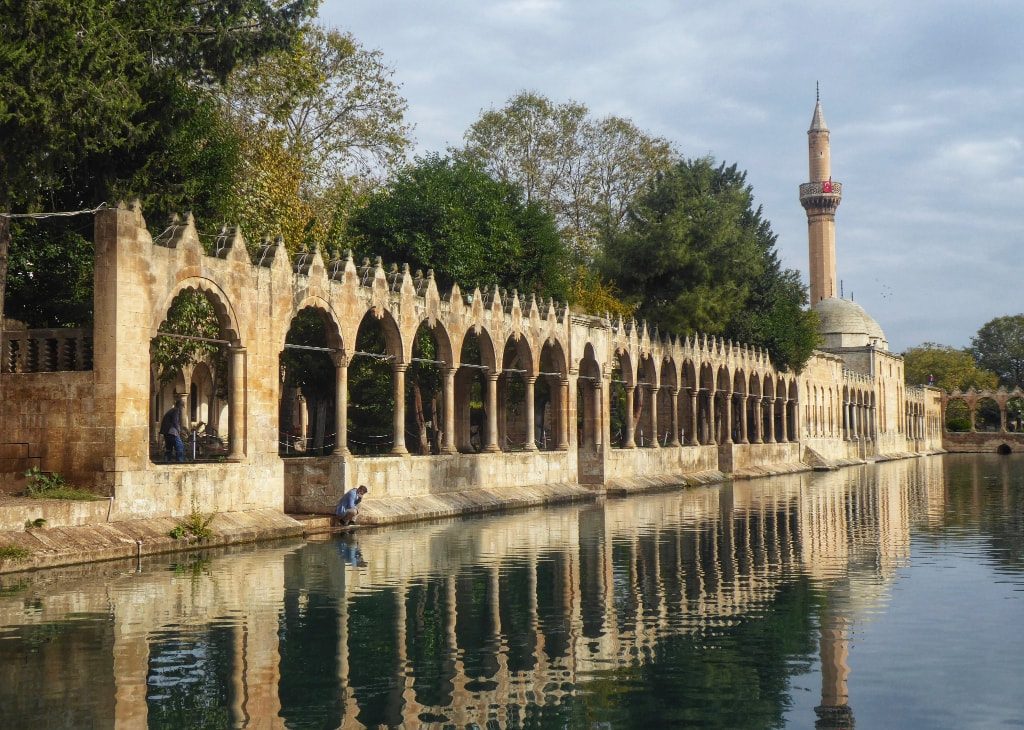 Back then I wasn't blogging and from this part of the trip I didn't even get any photos. Somehow my memory card got corrupted and photos from the Sümela Monastery out side of Trabzon, Van, Diyabakir, here, the border crossing, Raqqa, Aleppo and Palmyra, were lost to the dogs.

Fast forward to the present day: I arrived on a 9 hour night bus from Nevşehir. I waited from 5am until almost 7:30 in the bus terminal then walked into town. More details in the getting there and away section a bit further down.

Şanlıurfa is a 'truly ancient city' - Wikipedia - and dates back to 9000BC if you can imagine such a time. It is also said to be the hometown of The Prophet Abraham.

So with a shit load of history under its belt, there is a lot of stuff to see here:

On a hill just south of town. Well recommended for a visit. It's about 7km from town. Walk south on the main street and hang a right on Sokak 3622 and keep on walking. I suggested an edit for GoogleMaps which they declined!
​
So after the housing blocks end, follow the dirt track. Keep high. You'll zig-zag round to the left, a bit then continue on before curving off to the right. You can see the ruins for the most part on the walk in, so you'll know the direction you have to go. The ruins are the tiny little blip on the far right side of the image below, on sky-line. 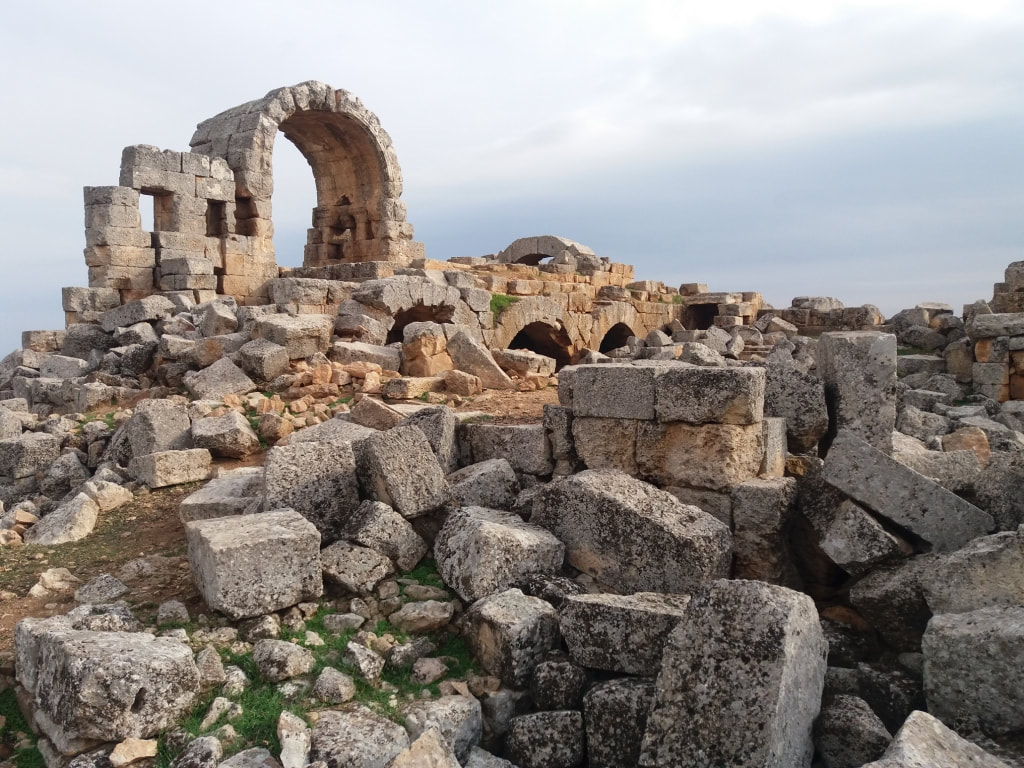 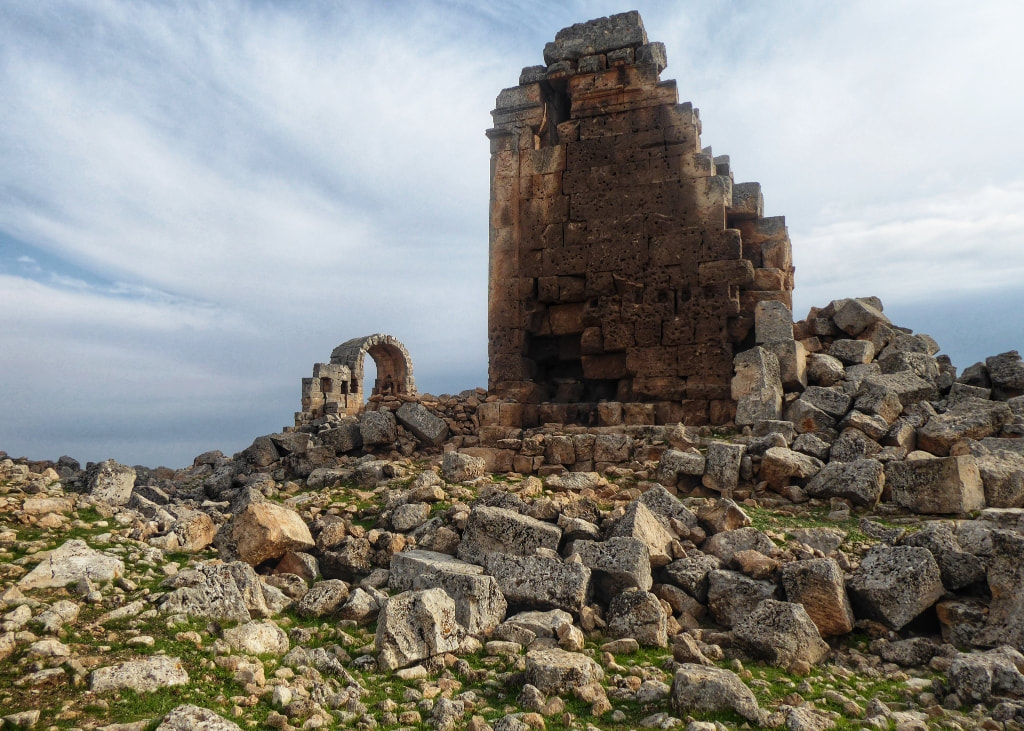 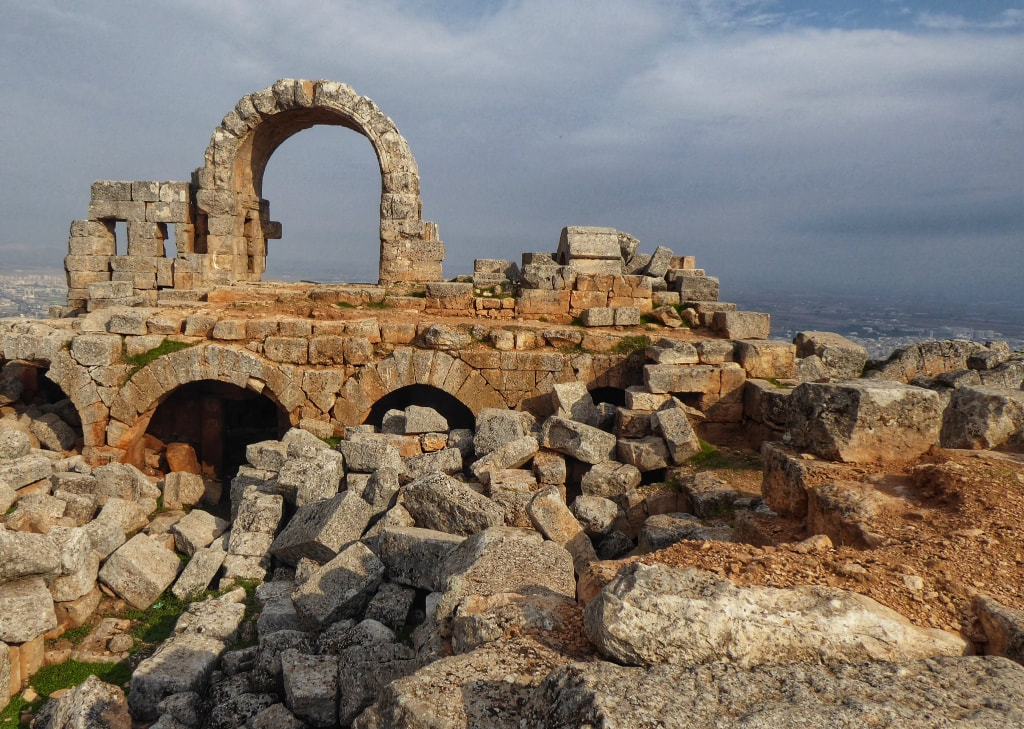 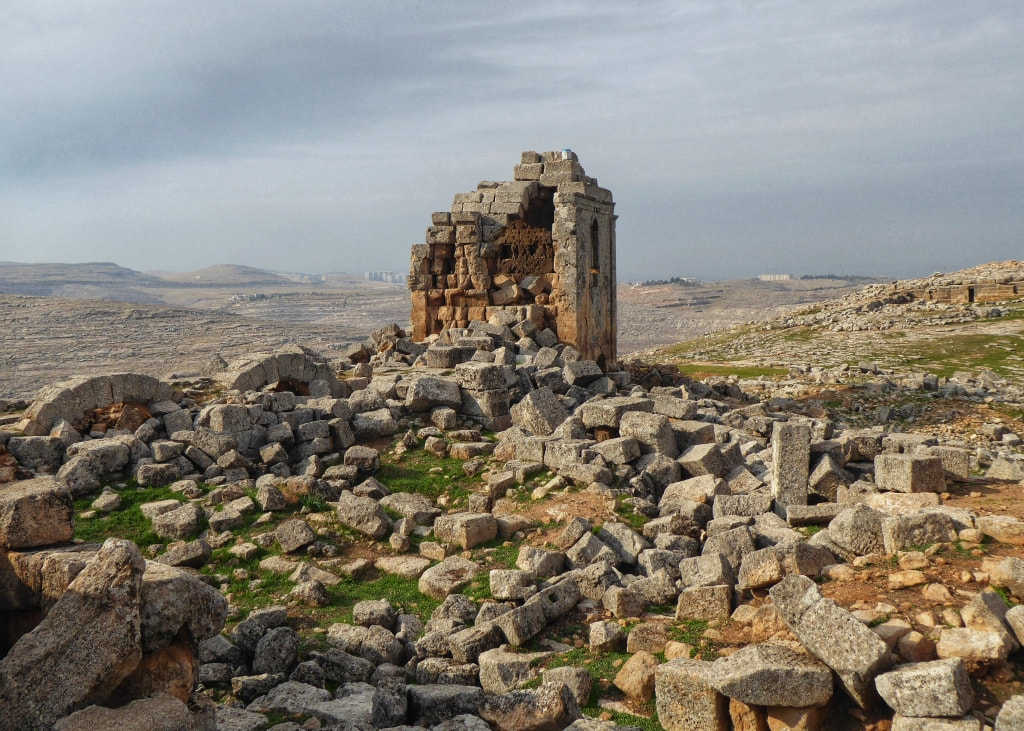 A short walk from town, opposite the Piazza Mall (Good for a McD, BK or MediaMarkt - I bought a spare micro SD card), the Şanlıurfa Museum. Ticket is 18TL and includes entry to the Mosaic Museum, which really should not be missed.

The Şanlıurfa Museum is an Archaeological Museum and covers everything from the Paleolithic Age to the present day: 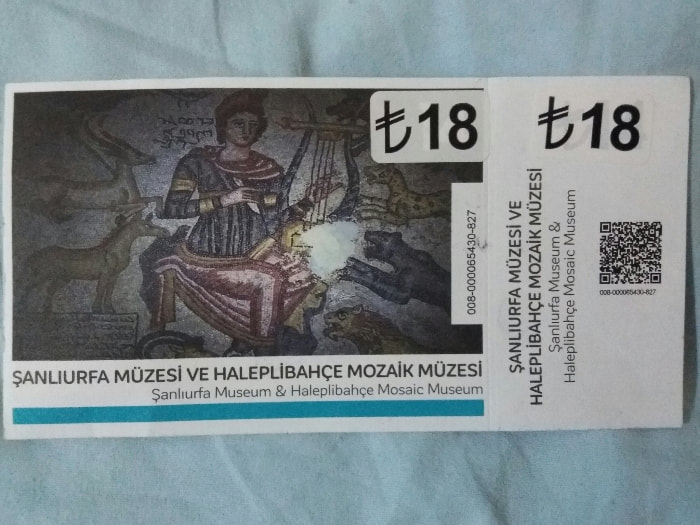 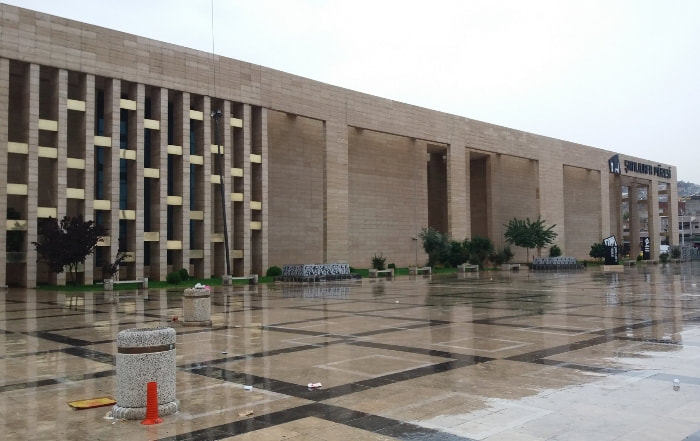 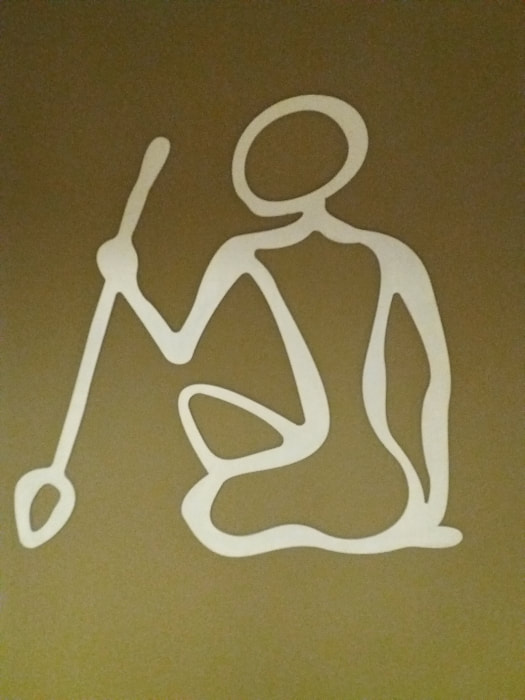 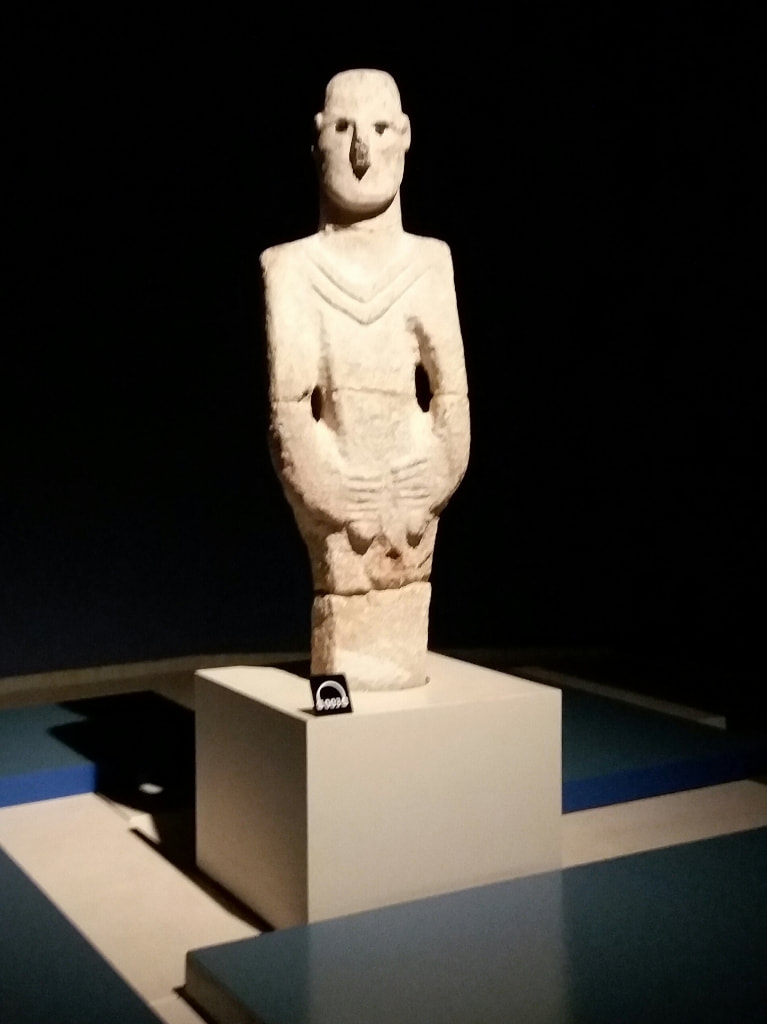 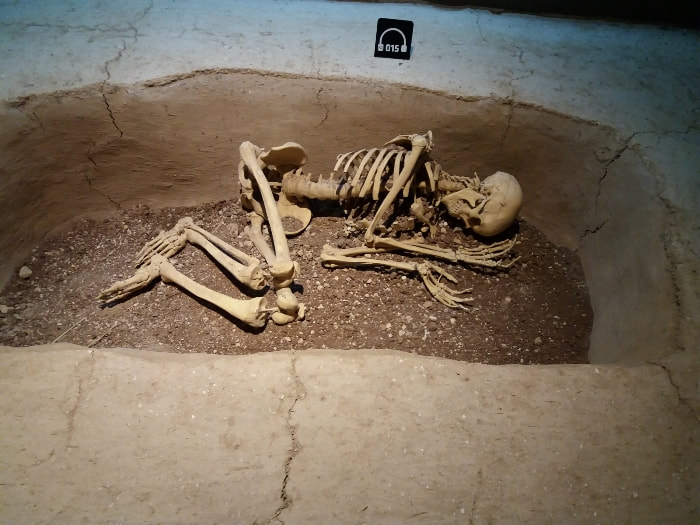 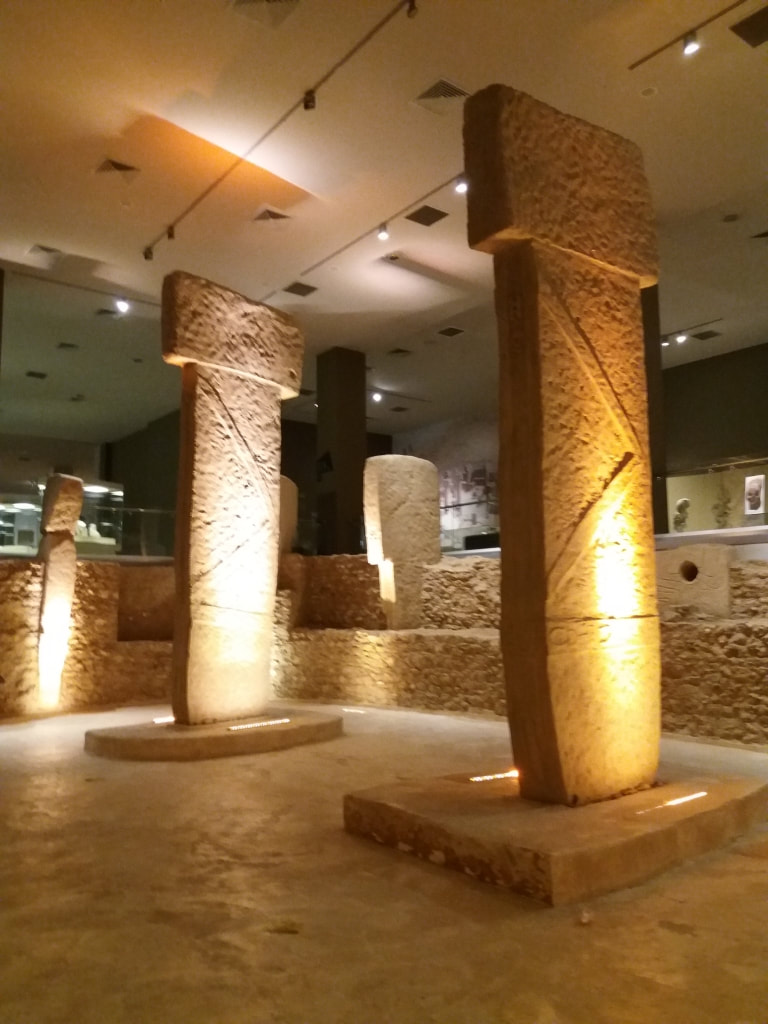 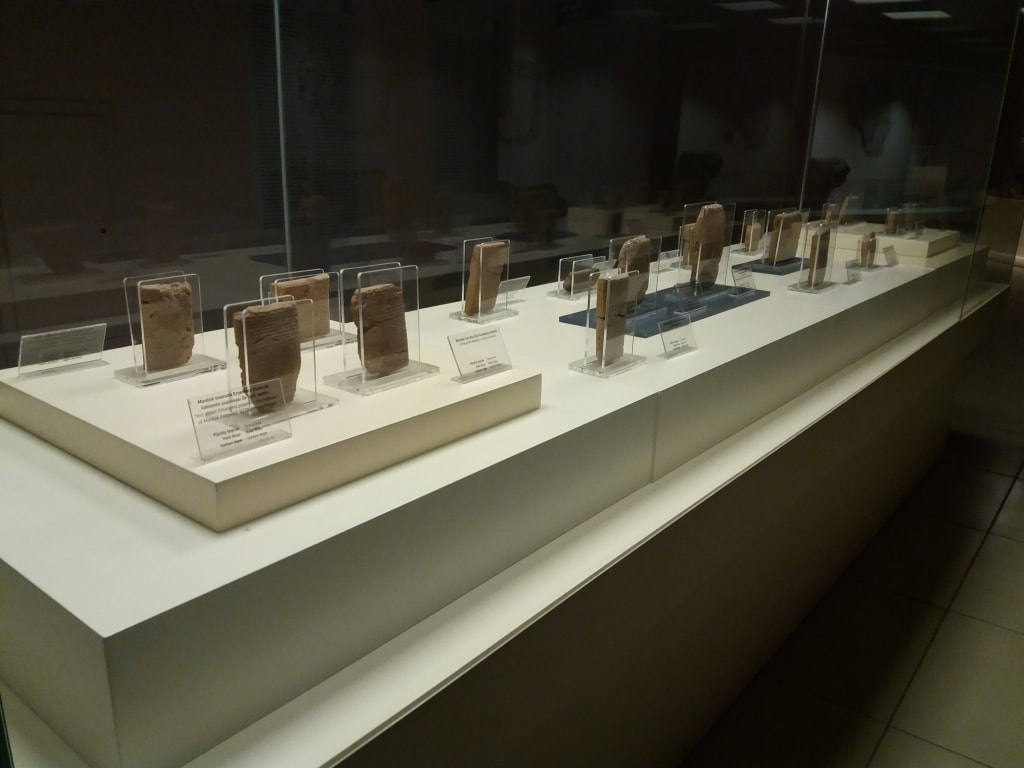 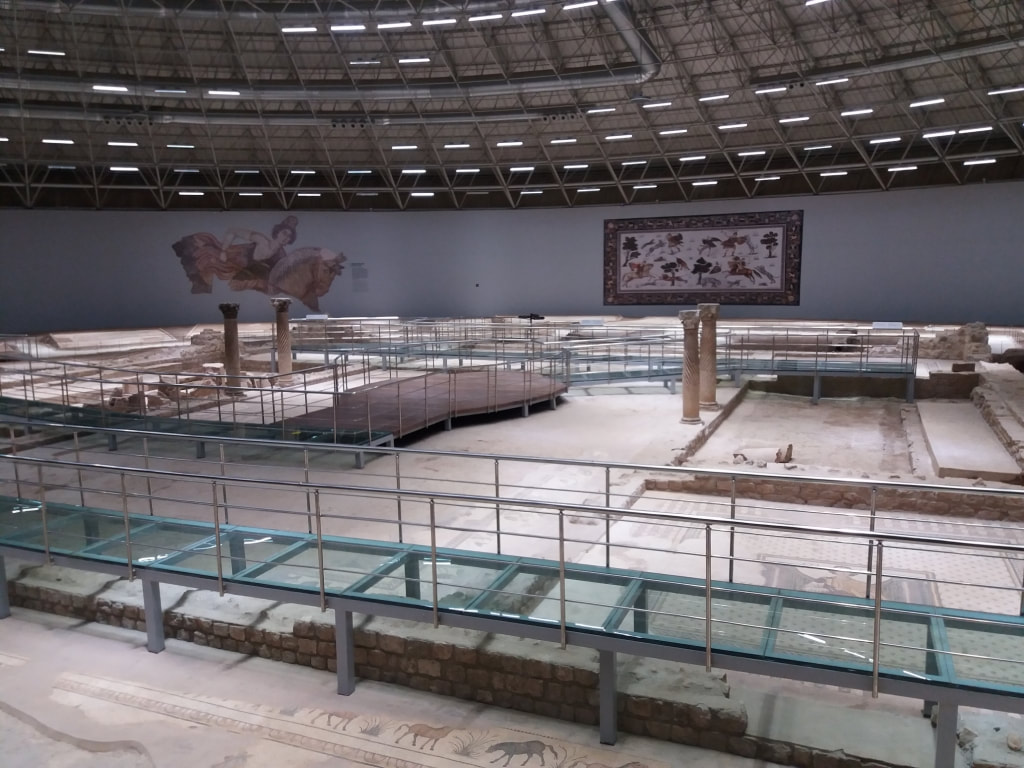 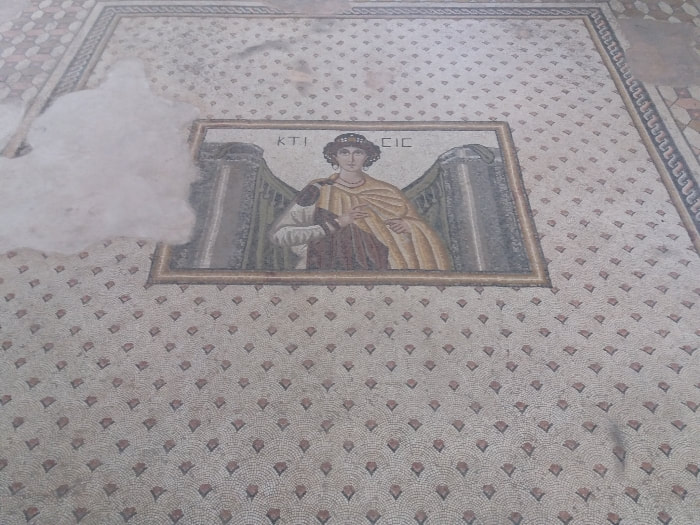 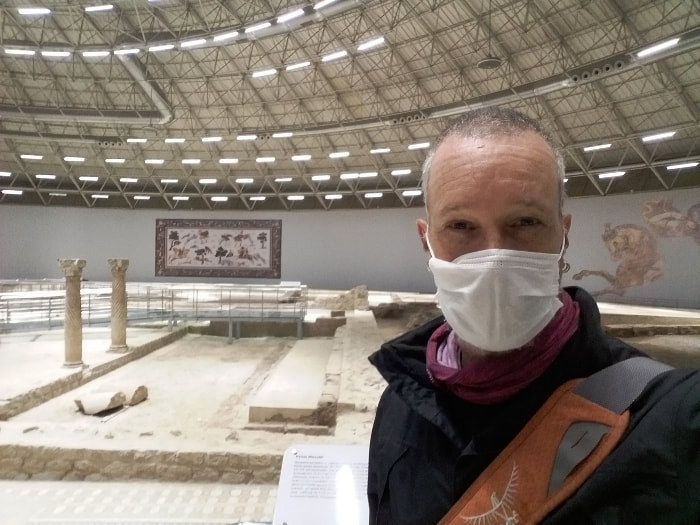 ​Prophet Abraham lived around 2000BC. He rejected the claim that Nimrod, the ruler of Urfa was God. Abraham destroyed statues worshipped by the inhabitants of Urfa.  As mentioned in the Quran 21:68 "Burn him and support your Gods - if you are to act.

A great fire was lit in the place where the lake is now. Abraham was thrown into the fire from the mountain above the lake. The fire cooled under the order of Allah: "Oh fire, be coolness and safety upon Abraham." (Quran 21:69).
​
According to the tradition, the place of the fire was turned into water and the glowing embers into fish. The current lake formed where Abraham fell. Source: info plaque. 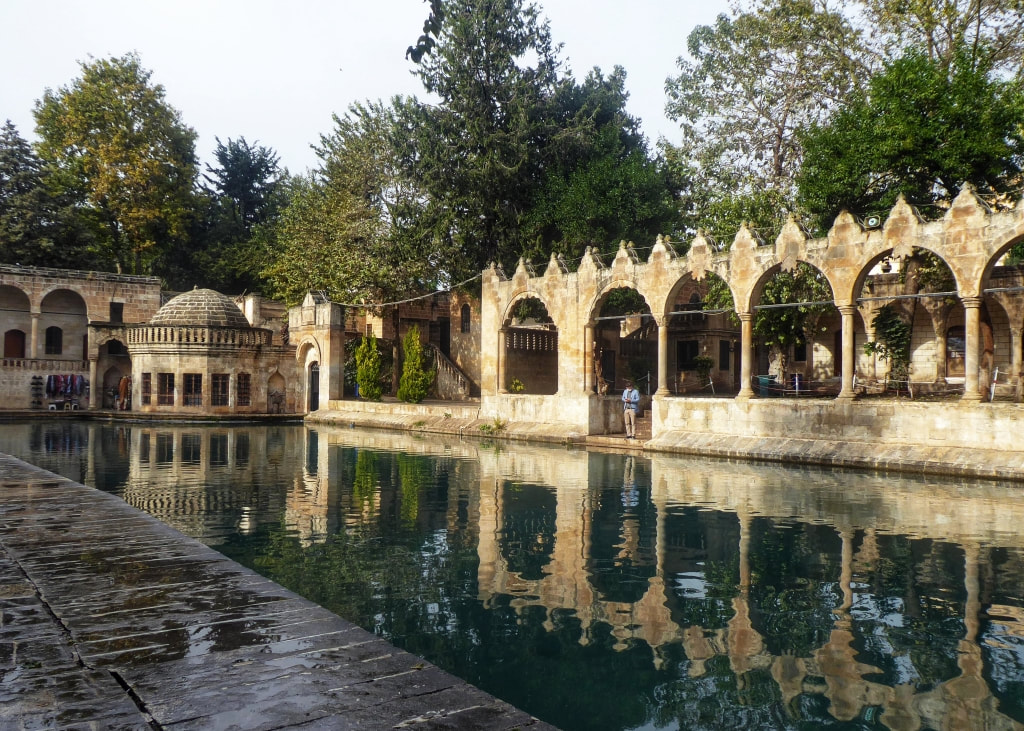 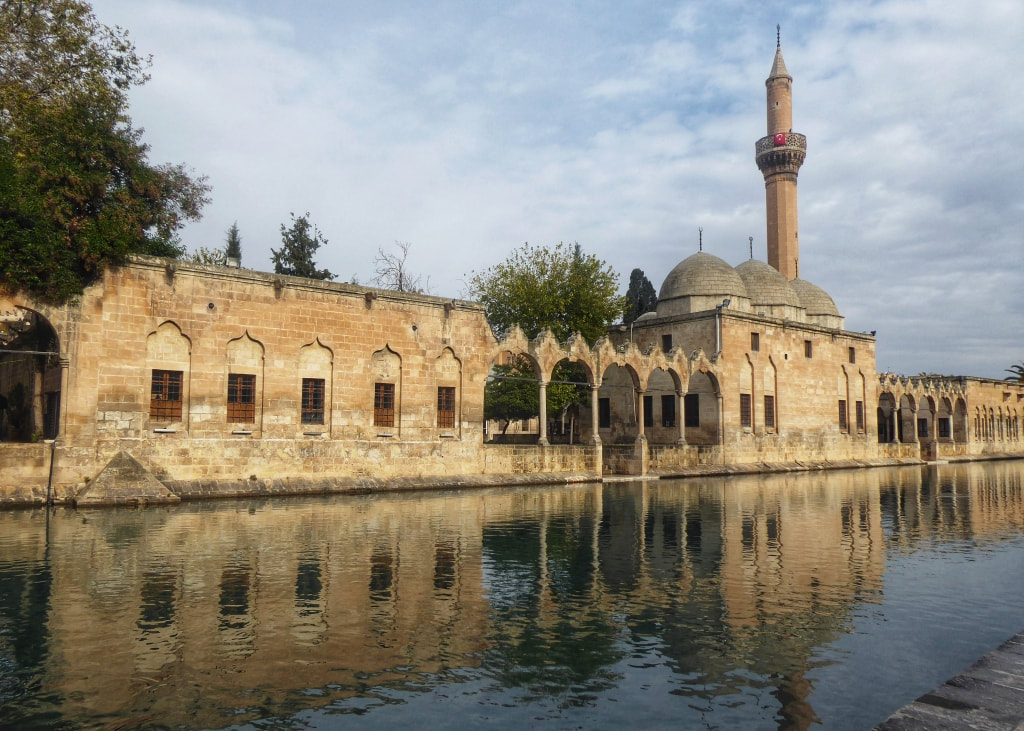 "Mevlid" means 'birthplace of the Prophet'. It is believed that Abraham was born here. When Nimrod was informed one of his children would wipe out his religion and demolish his kingdom, he order all his children be killed. Nuna, pregnant with Abraham, dared not tell the King of her being pregnant and hid in the cave. Abraham was born in the cave, which is inside the mosque. Nuna went every day in secrecy to suckle him and it is believed that on the order of Allah, a gazelle also went to suckle him. Abraham lived in the cave until he was 14. Source: info plaque 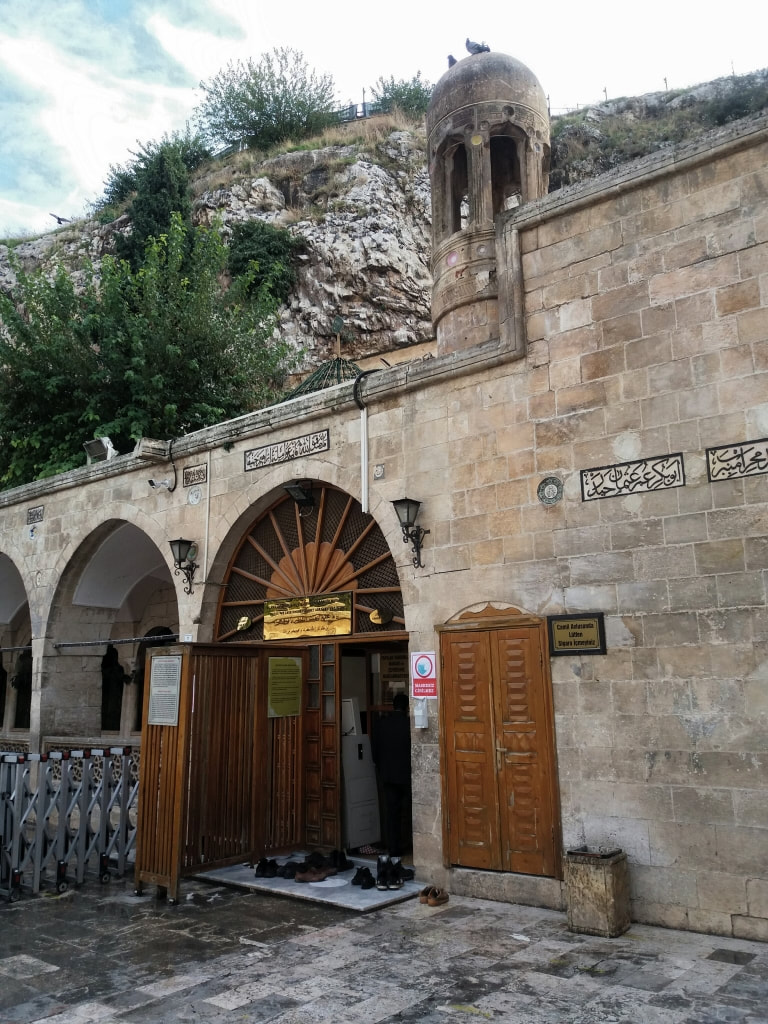 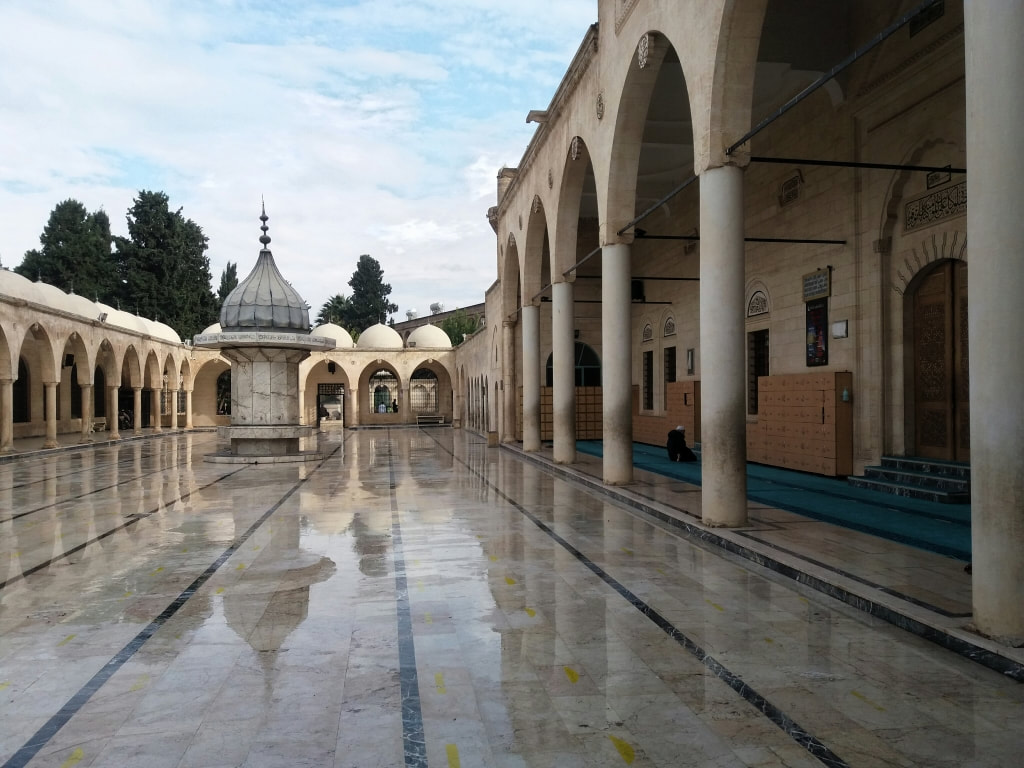 Zeliha, the Kings daughter seeing the miracle in which Prophet Abraham was rescued from fire, accepted the invitation to Islam and rejected the claim that her father was God before him. Nimrod reacted with anger and threw his daughter into a fire. Nimrod watched his daughters burning and death with indifference. A lake formed in the place where Zeliha fell and fish appeared in the lake. The place is called "the tears of Zeliha". Souce: info plaque. 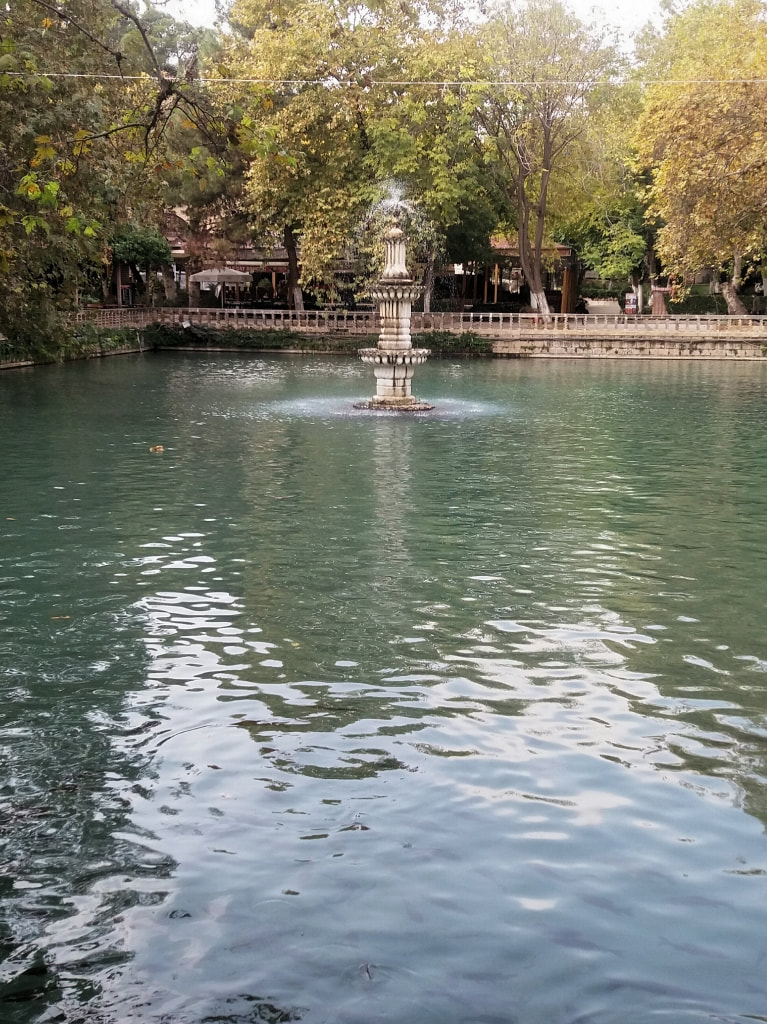 Other stuff around town: 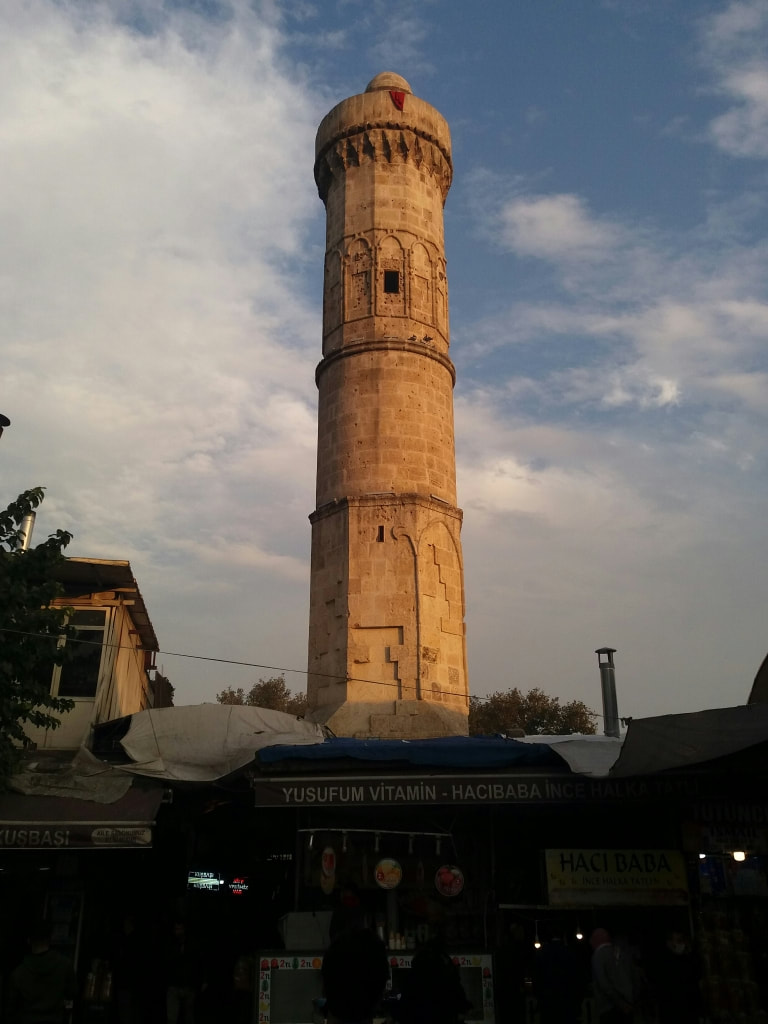 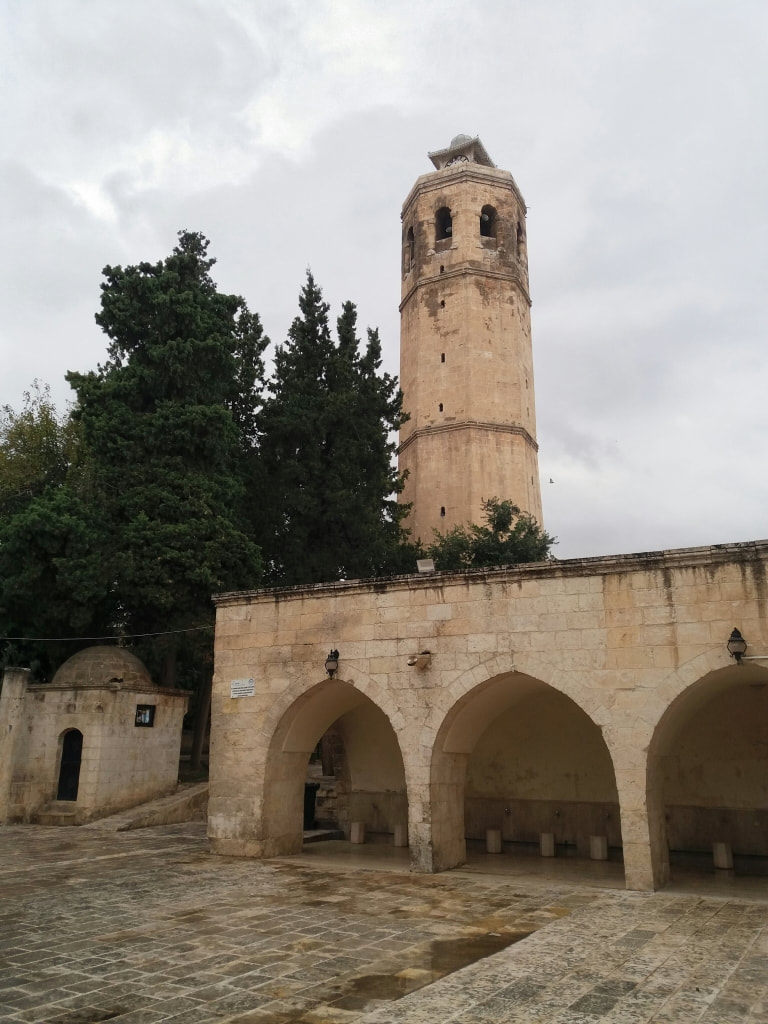 I made the rather longish hike out to Germuş Kilisesi. 10km away. 19th Century, semi derelict church.
Because of the weekend curfew not ending until 10am, I set out rather later than I wanted. But it was a beautiful day. It gets dark at 6pm. I had 8 hours to play with. 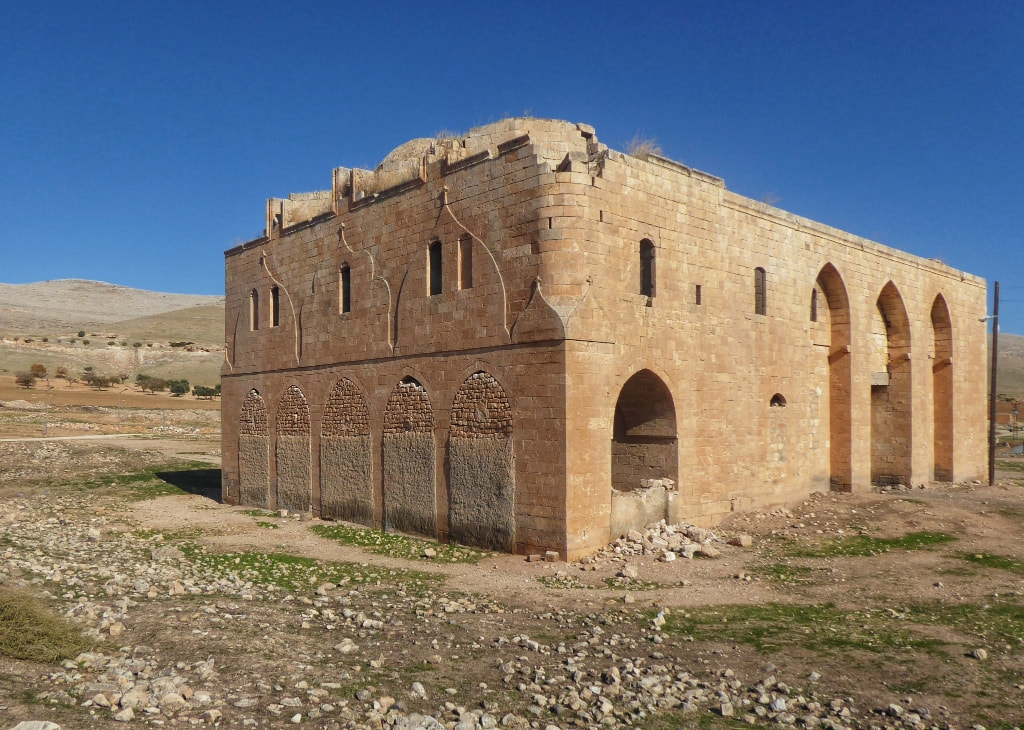 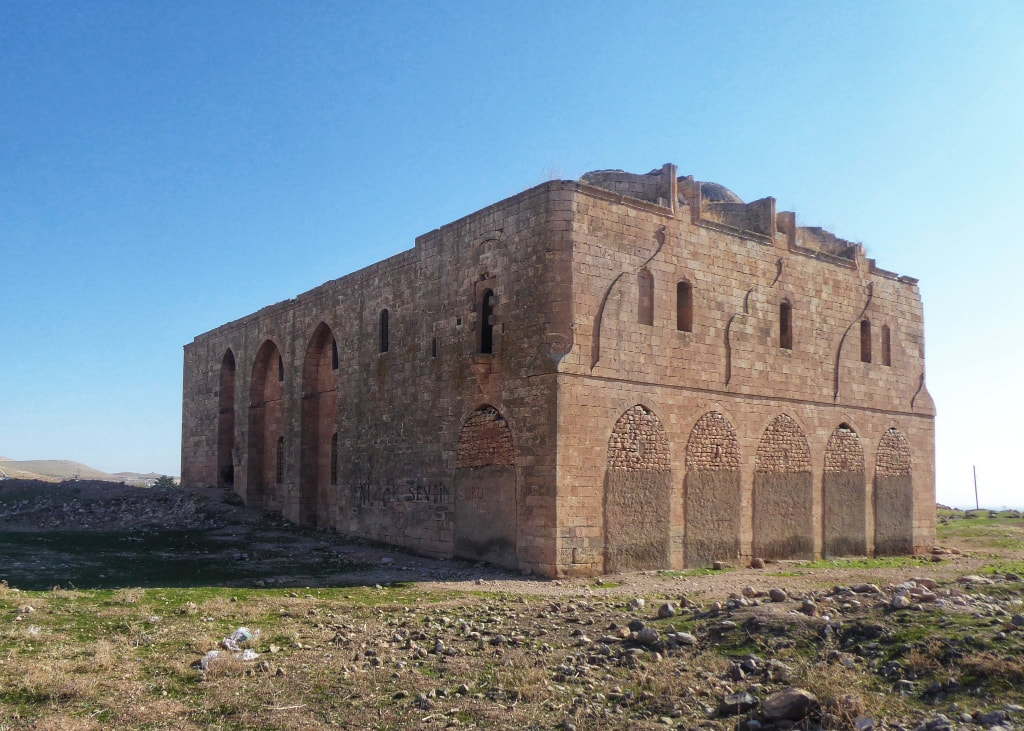 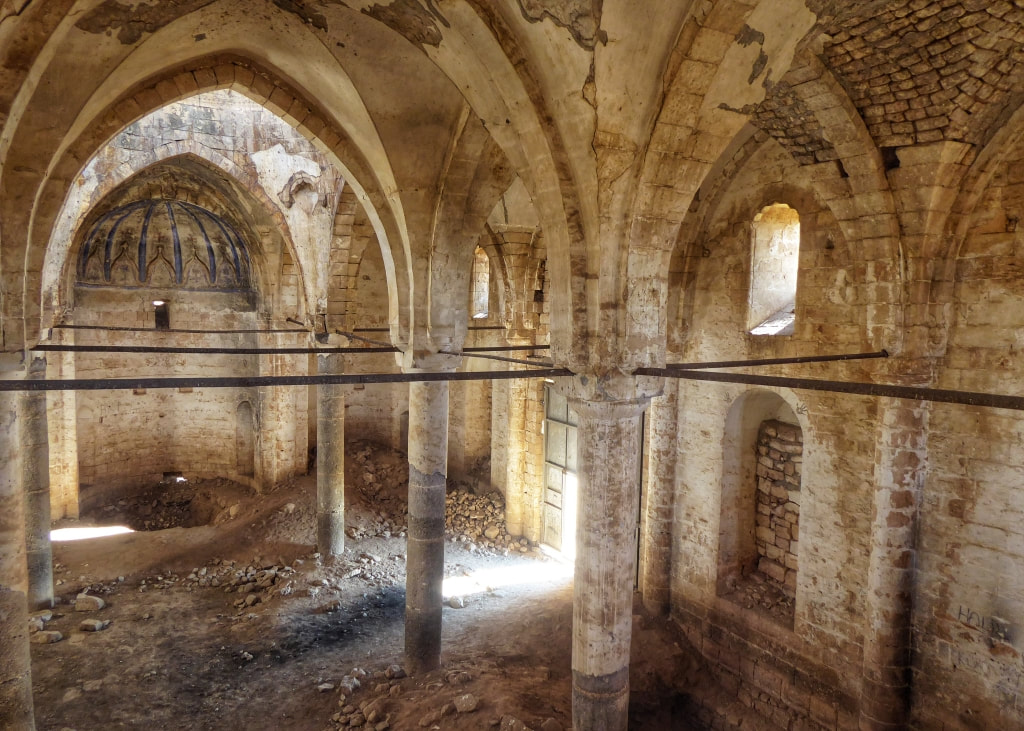 When I arrived at the church, a shepherd and grandson (?) were tending about 50 sheep and a couple of goats. They were making a brew on a small fire and as is the norm here with the wonderful Kurdish people, I was invited. I declined the offer to eat though. Sitting in the sun, keeping distance, no need for words. Just lots of smiles! 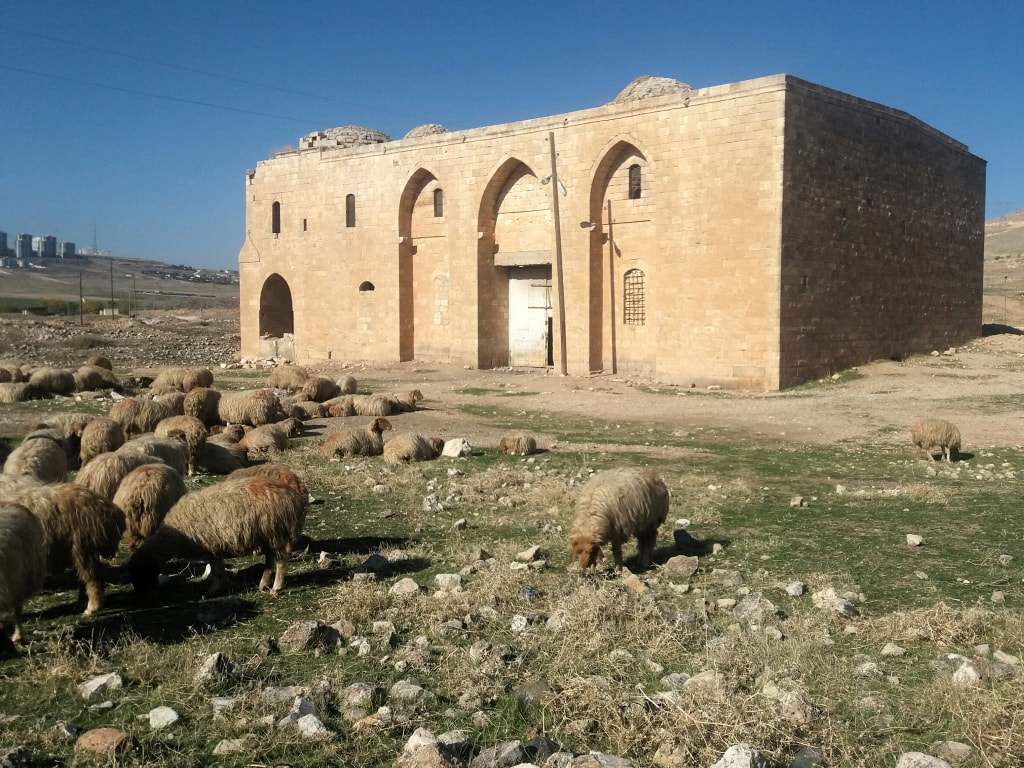 There are 2 sites out of town that are probably worth the visit: ​Göbeklitepe and Sit Alanı. I am quite exhausted so maybe in another life time I'll get to these. But I read today that another, much older site has been discovered: https://www.dailysabah.com/ at Karhantepe.

How to get to Sanliurfa - Turkey

As of 2020, this is the location of the Şanlıurfa Otogar (bus station) as per GoogleMaps and MapsMe:
Someone wrote on Wikitravel that the bus station is no longer in the location marked on Google map. They did not date the 'new' piece of logistics and it seems many sites have copied this information, also saying that the bus ride into town takes 30 minutes. I doubt that very much as I walked it in 1 hour! I suggested an edit on Wiki. The GoogleMaps location is correct @2020.

In 2010, I was dropped off on the highway and this guy collecting his mum at the 'drop off point' drove me into town, stopping at a rather posh hotel. My heart dropped and did the old miming routine of exasperation and I was in need of 'something cheaper', he stopped a local bus, spoke to the driver who then started telling me in German that he knew of a place, and drove me there, in the bus and he didn't charge me the fare! This is the attraction of Eastern Turkey. People like to help without thinking about how they can profit from it.
​
I am not sure which hotel it was but this time have ended up somewhere near where I think it was. And this was confirmed after 3 days when I had to relocate after the hotel I was in had a fire.

How to get to the airport in Sanliurfa - Turkey

Şanlıurfa to Istanbul, 20 hours on a bus verses 1hr 55 to fly. 150-180TL verses 250TL, yes 250TL to fly to Istanbul. Normally I wouldn't consider the flying option as I am usually on an 'overland journey'. Had Georgia, Syria or Kurdistan been open, I would have continued travelling in Turkey but this section of the journey is done.
​
I went to GAP TURIZM and paid cash for the flight.​
There arn't many flights out of Şanlıurfa so Havaş run the shuttle bus for the flights as and when.
Here is the schedule as of November 2020:
Their website is havas.net (unsecured) but it costs 14TL for the 37km.
​