​​​Connect on Twitter
Backpacking in the Caucasus, Kazbegi | Georgia 2015

This post has been rewritten for Nomadic Backpacker and is based on my travels to the Georgia in 2015
After enduring a 50-minute tooth extraction from hell at a back street dental surgery in Tbilisi I needed to get out of the city.

August 2015 with daily temperatures knocking on 45deg C, I headed out of the city to Kazbegi, one of my two favourites 'mountain getaways' in Georgia.

Kazbegi or to give its official name, Stephantsminda lies at 1740m asl, 100km from Tbilisi, 12km from the Russian border crossing at Larsi.

I first came here in 2010 looking for an escape from the heat. I found it. I'd planned on staying a few days which became 18. It's that type of place. I must have been to Kazbegi 3 or 4 times since that first trip
​
I have always stayed at Nazi Guest House (pronounced Nah-Zee). I arrived unseen, dumped my bag on the veranda and just sat there waiting, enjoying the cool mountain air and the peace and quiet. Nazi's place gets busy but she always finds room for one more. I once moved in with her sister for a few days.

Nazi saw me sitting there. She did a double-take and came to greet me like a son returning home after a long absence. Invited into the family's kitchen, I was fed and watered and then her husband came back and got out the cha-cha. Happy days!

Dinner time and we were about 20 or so. A group of Ukrainian mountain climbers were also staying. I'd always volunteer to serve everyone. I'd eat separately in the small kitchen. A huge plate of food set before me, Nazi would say, "eat, you look so skinny".

The next morning with my jaw still aching from tooth extraction I walked into town and dosed up on some stronger pain killers.

Spying a new wine shop on the towns main square next to the Staphantsminda hotel I purchased some Kakhetian 'red'. I took it back to Nazis.

​Having installed myself in a comfy chair on the veranda I popped some pills and got to work on the 'red'. Together they make a gem of a cocktail.
​
When I wasn't eating or drinking, I'd hike up the 4x4 track to Tsminda Sameba also known as the Gergeti Trinity Church, the most photographed church in the Caucasus. 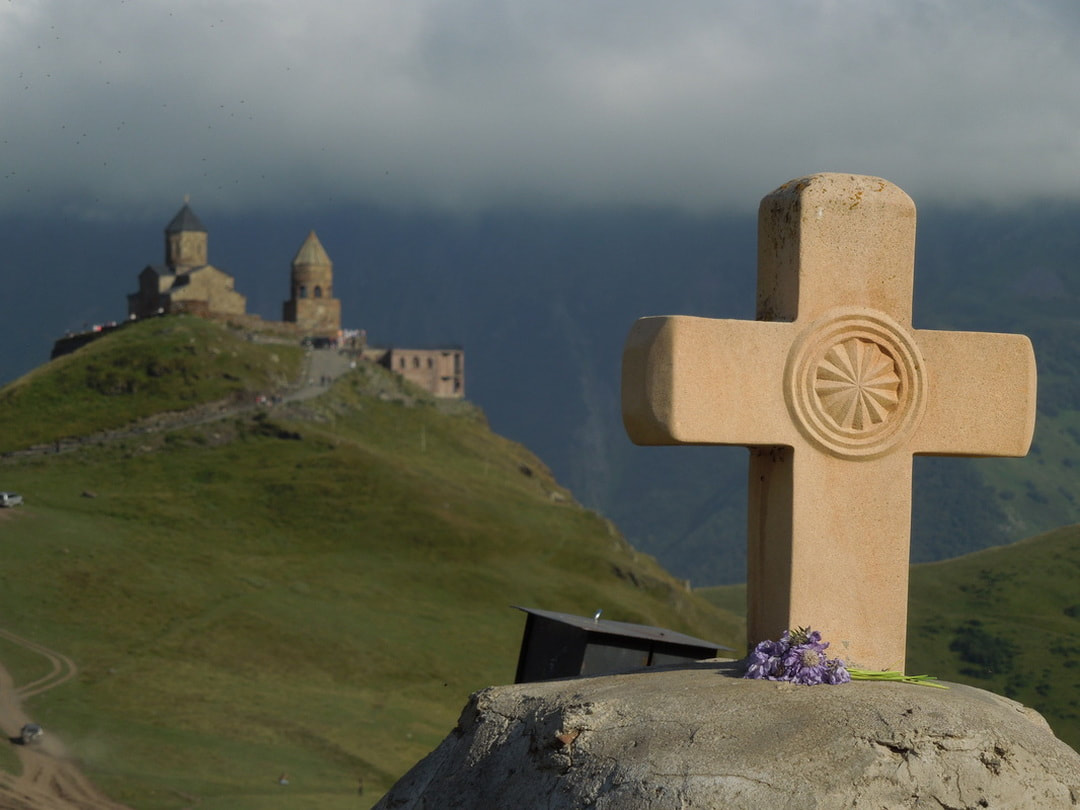 The jaw ache continued. Fearing infection, I headed back to the pharmacy and asked for some antibiotics. Luckily she spoke English. Normally she would have quite rightly needed a prescription but on hearing that I'd had a tooth removed, she was willing to overlook this small matter. And found me some stronger pain killers too. She told me the dosage and reminded me, "no alcohol". I went straight to the wine shop and stocked up with some more 'red'.
​
After the first week, the weather changed. So I'd spend my days in a small cafe that had opened up since I was last here. Lavazza coffee, cakes and fast WI-FI.

Too much eating and drinking, Nazi was happy, I didn't look so skinny anymore but I thought I needed a bigger hike before things got out of control.

Once you get to the point where you turn off for Tsminda Sameba if you just keep going and you will arrive at the Gergeti Glacier.

It's a tough walk. Normally it takes heavily loaded hikers 5 hours to get to this point before they continue to the summit of Mount Kazbek.

​I was very pleased with my trip. Nazi Guest House to the Gergeti Glacier and back in 5hours. Hope for the old bastard yet. 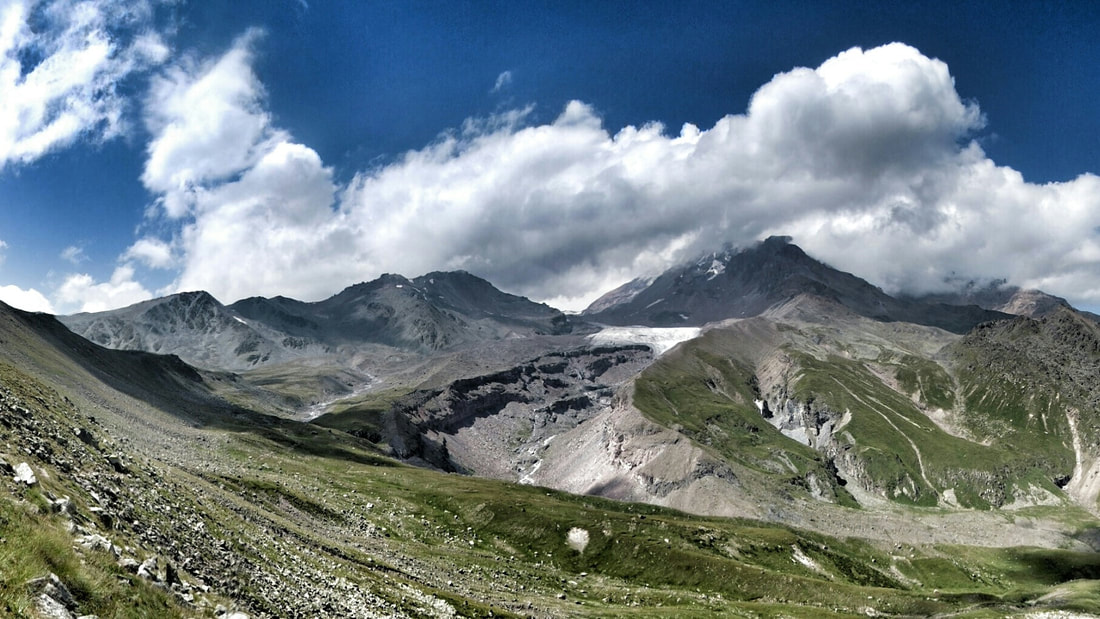 Mount Kazbek, 3rd highest mountain in Georgia 5033m. Some of the Ukrainians had sumitted Everest and said that this little ripple was a serious under taking. 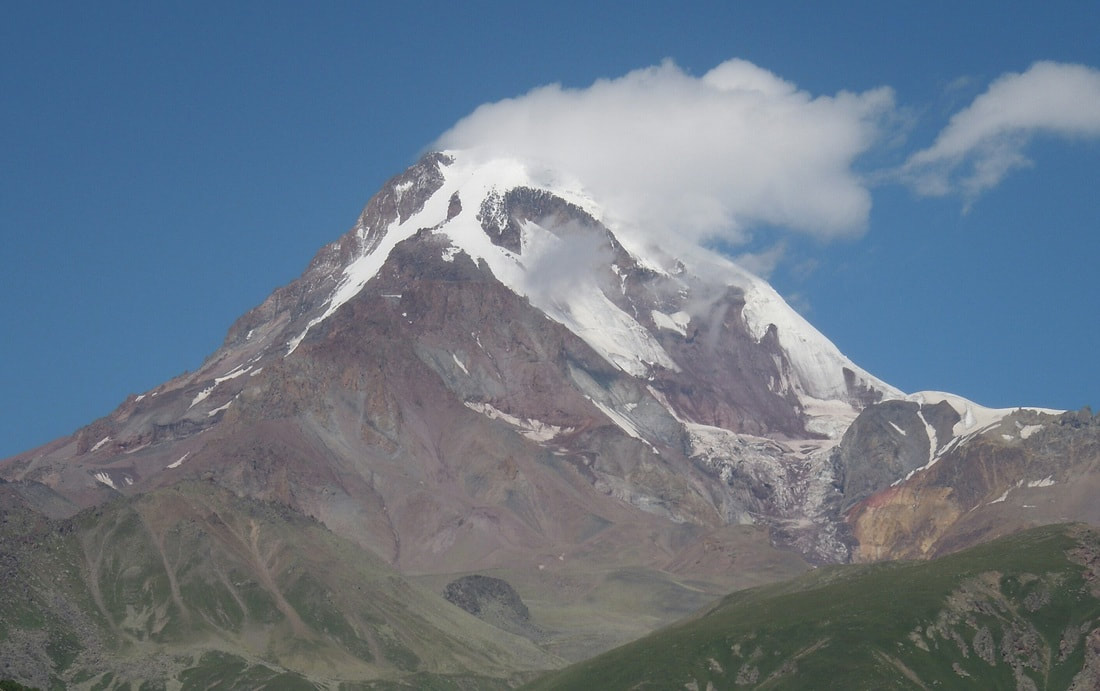 After about 2 weeks my Korean lover arrived. Enjoying the fact that she could go to Russia without a visa, she headed north out of Almaty, whilst I went back to Kyrgyzstan to do the Ala Kul hike. She had taken the night train to Vladikavkaz and a minibus to Verkhny Lars. Ever resource full is SJ, she got a ride through the border tunnel and right to Kazbegi with a Russian trucker.

I'd already stocked up on some 'red' and with some cha-cha, we got a bit plastered. Well, maybe a bit more than a bit'. SJ loves a drink. Paralytic would have been a better phrase. She went off to get some 'air' and came back an hour later wet and covered in mud. Not that I was much different, except I had not fallen in the stream. I'd passed out in the bathroom.

At 7 am SJ was taking breakfast. When she's travelling she becomes a 'holiday smoker'. She smokes 30 a day, drinks like a fish, gets crazy drunk and when out hiking, will leave me for dust. Every time!

We parted ways 3 weeks later. She returned to Korea. 8 months of travel over. It's been a while since I heard from her. But randomly she will send me a message. I hope she is doing OK.​