Hitchhiking the Pamir Highway Across Kyrgyzstan and Tajikistan

​​​Connect on Twitter
Travels in Central Asia - 2015 - Hitchhiking the Pamir Highway from Osh to Dushanbe. 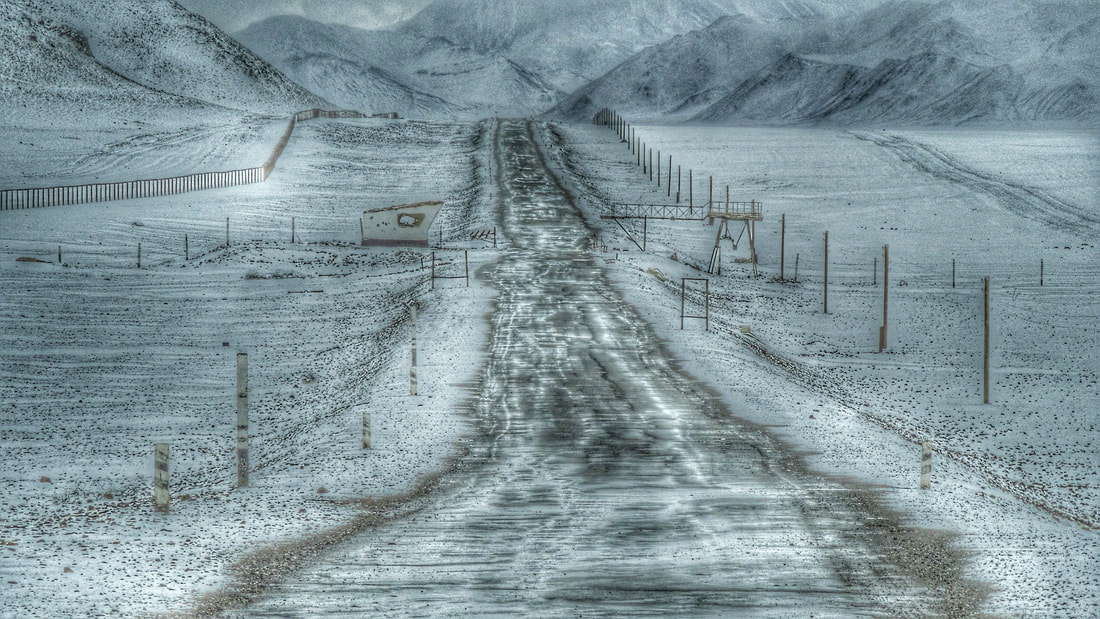 This post has been rewritten for Nomadic Backpacker and is based on my travels in Central Asia in 2015
The Pamir Highway starts in Osh, Kyrgyzstan and ends in Dushanbe, Tajikistan. It's 1252km and goes south from Osh to Sary Tash, over the border into Tajikistan past Karakul lake to Murghab, then west to Khorog and finally to Dushanbe.

The highest point along its route is the Ak-Baital Pass @4655m. It was built between 1931 and 1934 to facilitate Soviet troop movements throughout the region.

I hitchhiked the Pamir Highway in May 2015. I use the term 'hitchhiking' as I did not hire a jeep from Osh to Murgab as is the usual tourist modus operandi.

There is little to no hitchhiking culture here. Paying for the ride is the usual practice. So don't be cheap.

I took a shared taxi out of Osh to the village of Gulcha then got a ride with some cool dudes to Sary Tash.

Sary Tash is little more than a crossroads. Coming from the north, left takes you east to China over the Irkesham Pass. Straight then right takes you west to Karamyk and Tajikistan but the border has always been closed for foreigners. Check if there have been any changes.

​Straight on and heading south takes you to Tajikistan and the Pamirs.

I stayed the night at the Guest House Eliza which was one of just two guest houses there but looking at Google Maps there are quite a few places as of 2020. My evening meal & breakfast were taken at the guest house. There was nothing else open.

Sary Tash is at an altitude of 3163m. The weather was bright and sunny but as soon as the sun went down, the temperature dropped.

So up with the lark the next morning, I needed to be ready to take any vehicle going. Of course, local traffic is not going to Tajikistan, I needed through traffic but since we were already 190km out of Osh I knew I had a long wait.
​
My hitchhiking was not helped by the arrival of some police who set up a speed trap. At one point some drivers were filming the shakedown after they were accused of speeding but the guy had a dashcam and was doing under 50kph whereas the police zapped him at over 80kph. 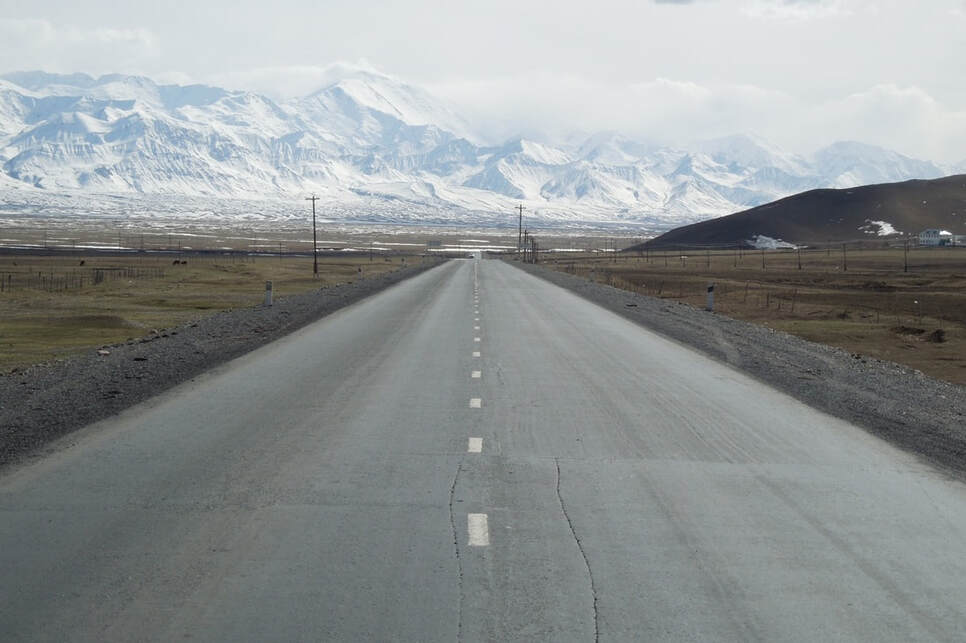 The road out of Sary Tash.
​
One of the locals had seen me waiting and offered to act as a taxi driver. I was reluctant at first and persevered with my wait but after 5 hours in the cold I accepted.

The car looked like a Ford Zephyr with a big crack across the windshield. He dropped me at the border post.
​
At the border, once done with the formalities, I had no choice other than to wait. I had no tent, the border guards were not so friendly and it started to snow. I wanted adventure, come on.

There is 21km of no man's land between the Kyrgyz and Tajik border posts. The former is at 3200m, the road then climbs like the proverbial, crossing the Kyzylart Pass @ 4280m before a short downhill section to the Tajik frontier.

I was picked up by a family who ran a homestay at Karakul, the village I wanted to get to. They were on their way to Murgab, the biggest town further along and would return to Karakul and open up for the summer season, the next day.

​Normally, you always pay for any ride. We did not speak money. They were doing me a massive favour. And when they dropped me off with their neighbours who ran Karakol's other homestay, they were more than happy with 20$.
​​
Homestay Aigerim, named after their daughter. A lovely family. Communication was limited. The man of the family knew about 5 words in English. My Russian had progressed to around 30 words, mostly regarding food, drink, numbers and pleasantries.

​His wife spoke more and they were organised by the CBT, Community Based Tourism, where they were talked thru the basic needs of us travellers and so they could open their homes to tourists, generating a small income, supplementing their own income generated by breeding, mostly, sheep. 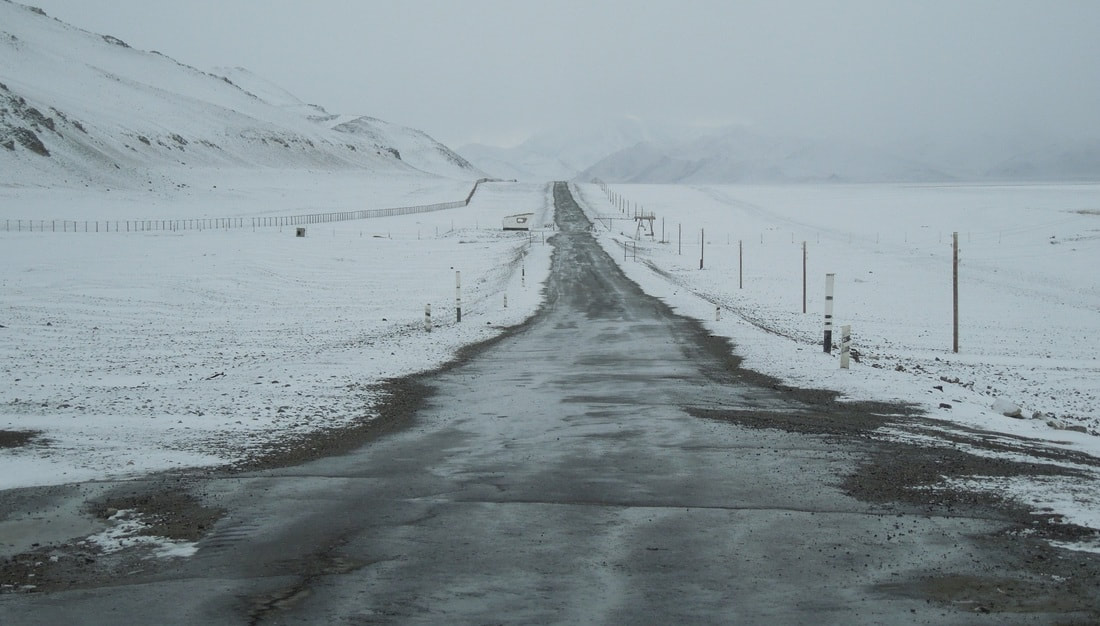 View down the road from Karakol village @3900m. Traffic is slow up on the Pamir Highway. On the first day, not one vehicle came past and so slept another night in the rarefied air.

The family were so sweet. The man of the house fussed over the fire to make sure I was warm enough. In fact I was more than comfortable and I told him in a game of charades that he did not need to use any more of the precious fuel, some scrubby bushes, yet still, he brought in more. Things grow very slowly up here at 3900m. There are no trees, just these bushes and winter is long and hard, summer is oh so short.

​It snowed in the night. The wind howled. Yet I wrapped up and went walkabout. Desolation in the extreme. Who chooses to live in such a place? It was one of those places where when you are there, you think OMG but when you have left you wished you'd hung around for a bit longer. 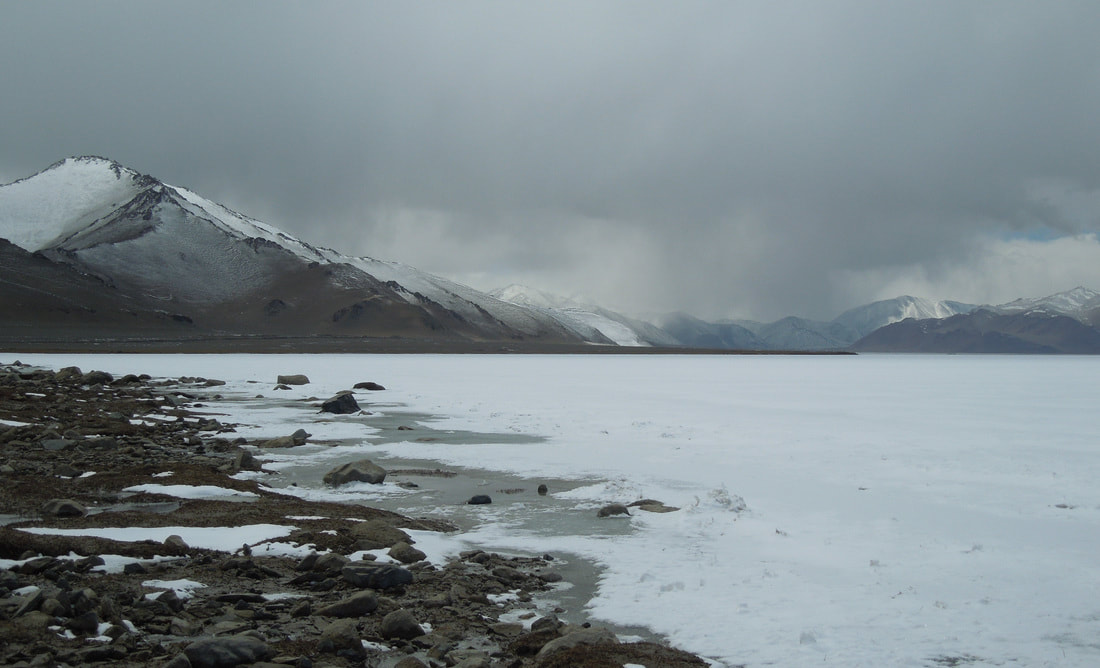 Karakul lake, frozen for most of the year despite being salty. Was formed a millennium ago by a meteorite.

Never before had I been somewhere so extreme, yet I loved it. So peaceful. The air so brittle, rarefied.

Traffic was non-existent the first day. After a second night where I slept soundly the day dawned clear.
​
​I had to wait until 2 pm until the first vehicle came thru. A Mitsubishi Shogun, running Osh to Murgab. The driver dropped off some supplies at my home-stay and after tea and never-ending bread, they made room for me and took me to Murgab. 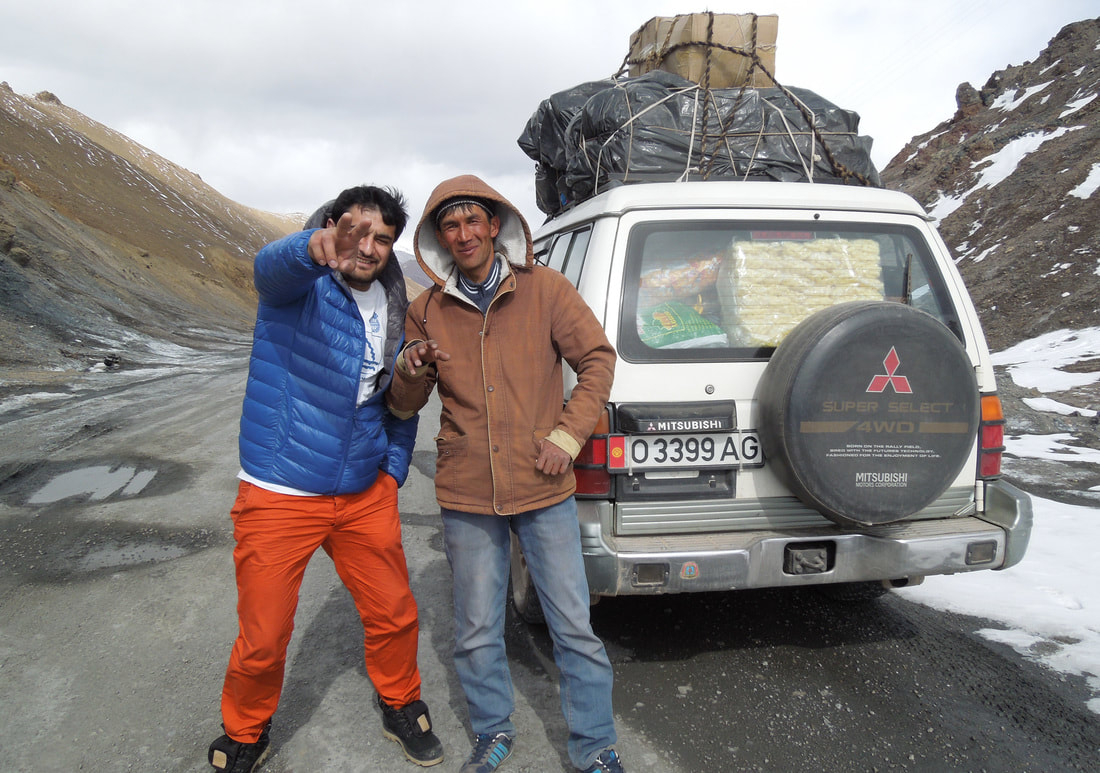 ​The Ak Baital Pass @4655m, the highest pass on the Pamir Highway, my second-highest ever, after the Kunjerab Pass in Pakistan.

A wonderful day. The guys took me to Murgab, dropped me off at another home-stay. In fact, it seems that every home-stay has a son who owns a 4x4 and they become the unofficial taxis across the Pamir.
​
Homestay Erali, Murgab @ 3618m, after dropping 1000m it felt positively balmy. Also staying there were 2 female cyclists, Megan from Canada, Ilona from Belgium. We were brought endless chai and bread and the wonderful host with her gold teeth asked continuously if we were 'хорошо'.

​Was grateful of some western company. We exchanged stories. I was fascinated by their tales from cycling thru this mostly inhospitable land. We walked out of town ways, ate lunch and drank a beer at the Pamir Hotel, chatted away the day.

​We took beers back and in the late afternoon, as we waited for dinner, sitting around a yak dung burning stove, we toasted life. And then another night under heavy blankets. Mornings were brutally cold. But spring was here. The sun was gaining strength. 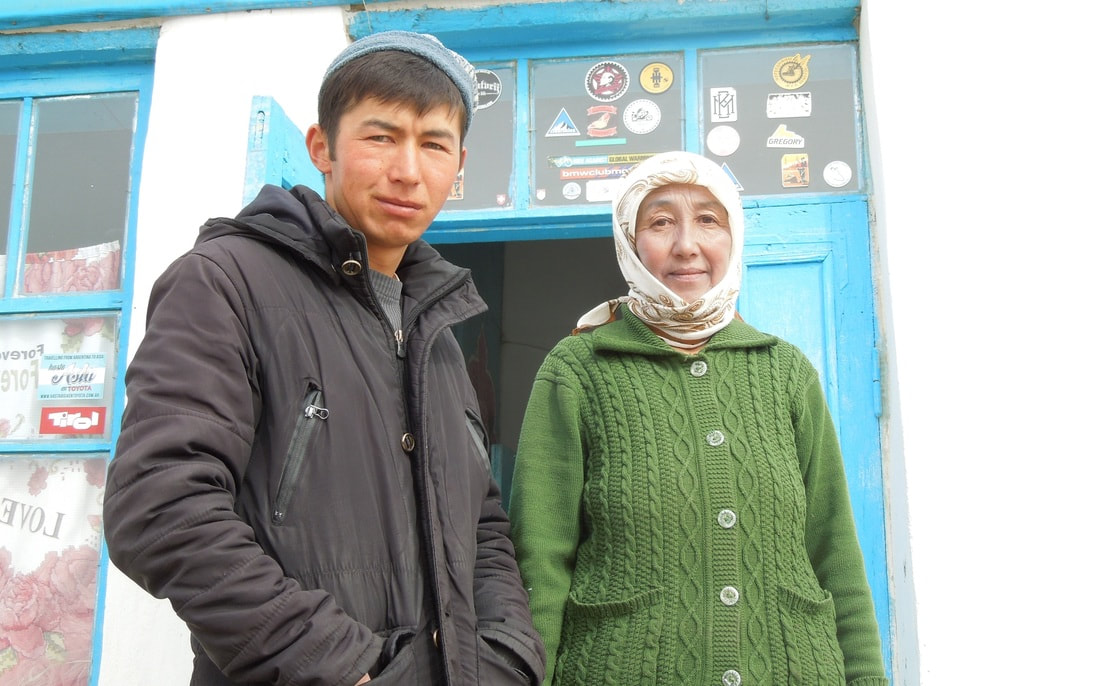 Tajik, my driver for the next leg. I had met him the day before. We shook hands and told me he was almost ready to go. We had to go and pick up a sheep. He would be travelling roof rack class, out in the cold for 311km with his legs tied together and half stuffed into a 50 l rice sack. Poor thing. I help load him up. And for company, he had a skinned yak next to him which I also manhandled up to Tajik who was up on the roof of his Pajero. 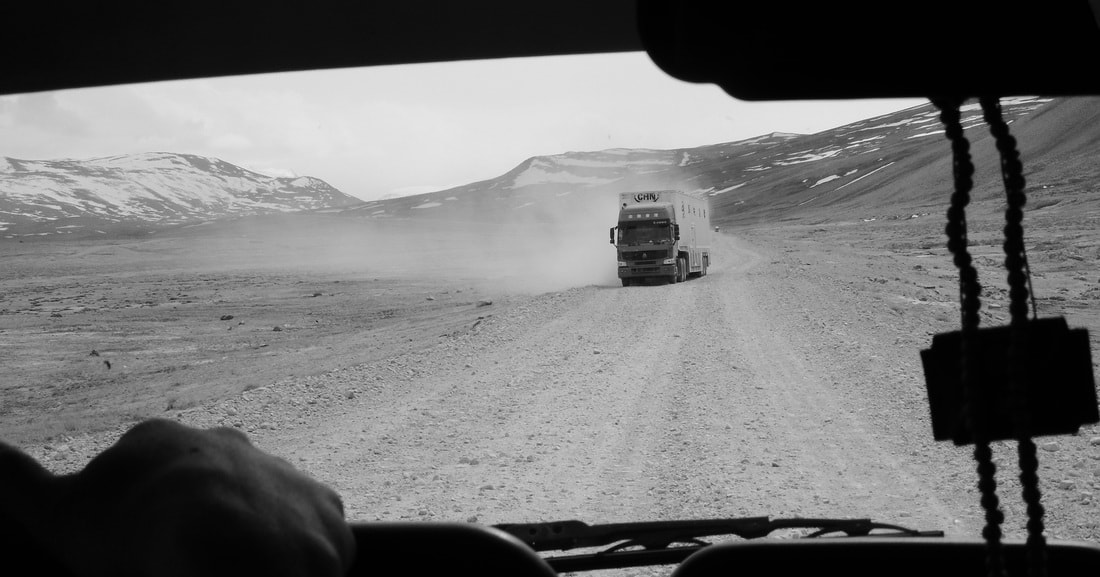 ​In the shop, I had picked up an extra chocolate bar. I had an errand. The 2 girls had left 3 hours before me on their trusty mounts and I asked Tajik to stop when we caught them up. They were having a little picnic in a small hollow, out of the wind. They were delighted. And then, they were alone again. I'd bump into them sometime next week, with the promise of more goodies.

Days end and we arrived in Khorog, the biggest place I've seen in over a week. Time for some RnR. Met some others who I had seen on the Pamir travelling fully loaded in the 50$ 4x4 that I mentioned that I avoided taking out of Osh.

Straight down to the Indian restaurant for dahl, rice, naan and lassi.. oh so wonderful. And 2 rather expensive beers. Celebration time as I felt I deserved it after the Pamir crossing.

​A great homestay, a chance to wash clothes, recharge camera batteries with the 24hr power but as the few days rolled by I longed for the wastelands, the emptiness, the harsh realities of life up at 3900m, of eating eggs, potatoes and pasta and wiping my butt with snow. Life had been reduced to living with the just simple necessities. Life on the Pamir Highway!

This post was intended to be part 1 of 2. Part 2, detailing my story from Khorog and the ride to Dushanbe never did get written. I have my diaries but sadly no access to the photos. I did make a side trip up the Wakhan and for this future repost, I do have images as I did a write up which was published on my first, now sadly defunct blog.
​