Border Crossing: South Africa to Lesotho by hitchhiking and walking up the Sani Pass

I hitchhiked from Sani Lodge to the South Africa border post then hiked up the Sani Pass and into Lesotho. 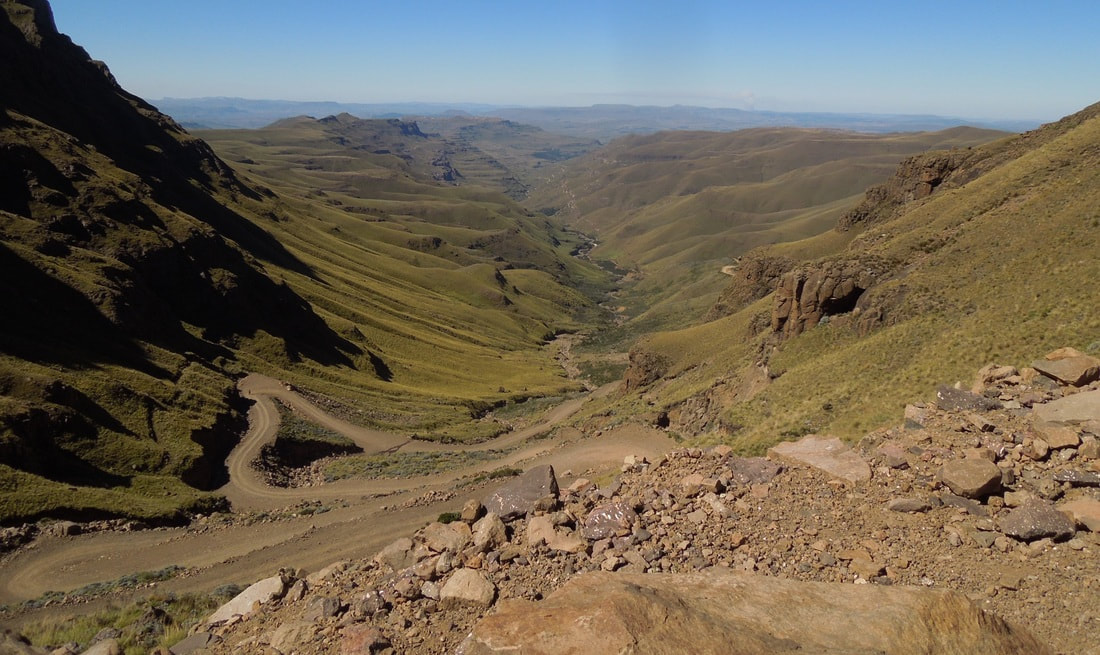 Lesotho, encircled by South Africa has the highest lowest point of any country, 1400m. A mostly barren, sparsely populated place, with seemingly more sheep than people. Getting into Lesotho via the Sani Pass, was, had always been the plan. The South African border control lies @1968m. Then comes 8km of no man's land and the Sani Pass. The gravel road climbs steeply to the top of the pass @2973m, where you enter Lesotho.
I left Sani Lodge. Started walking. After an hour I get picked up and ride the final 10km to the SOUTH AFRICAN border control. After getting my exit stamp, I bade farewell to the very kind South African couple and shouldered my bag once again.

Hot sun, dry air. This headache that's been bugging me for nearly a week, makes life difficult. I feel sick, exhausted, old. I stop regularly before finally finding my rhythm. Huffing and puffing. 2hours 30 including the stops and I am there.

This week-long headache was probably caused by a spider bite. When I was in Pretoria the bug control guys spent a day at the hostel and the next morning I had this big red area on my leg with a crater-like hole in it.

I also had a bite on my you know what. I kid you not. I had taken a photo of the bit on my leg and the staff at the lodge confirmed it was from a spider.
​
Nearing the top of the pass I turned round with awesome views back down the pass.

I change into dry clothing, got stamped in, despite having asked for the stamp to be put on a certain page, they put it in the middle of a brand new page. Idiots!

What to do? Stay at the overpriced Sani Mountain hostel or keep going to the Sani Stone Lodge?

I heard the Stone lodge was situated in a much nicer location, think - middle of nowhere - and cheaper at that, just that it was another 8km down the road. Once again, I set off walking. After 15 minutes a jeep stopped and I ride a few kilometres to be dropped at the turnoff and am shocked to find that the lodge is 3km down a dirt track. My first thoughts were, 'if it's raining in the morning, I am in for a wet time.' But it wasn't.

Another 3km, down a dirt track to Sani Stone Lodge - remote Lesotho - where I was, unsurprisingly, the only guest.

Where to stay in Lesotho: 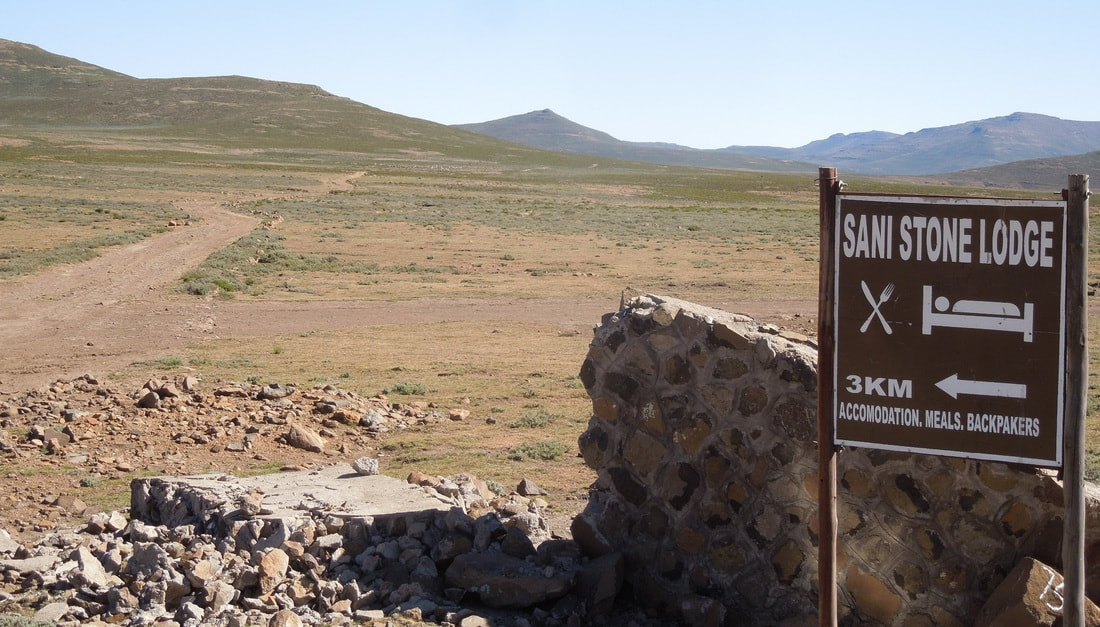 The 3km were easy enough. There was a big dorm room and a few rondavels, thatched bungalows, pictured below. I had a small kitchen so I boiled up a never-ending supply of hot water, to rehydrate after the day's exertions and the South African woman who ran the place cooked me a nice lamb chops dinner, washed down with a can of beer. By 7 pm it was completely dark. The moon was yet to rise. Absolutely no light pollution. I took a solar lamp back to my room, wrote for a bit and after a bit of stargazing, called it an early night. 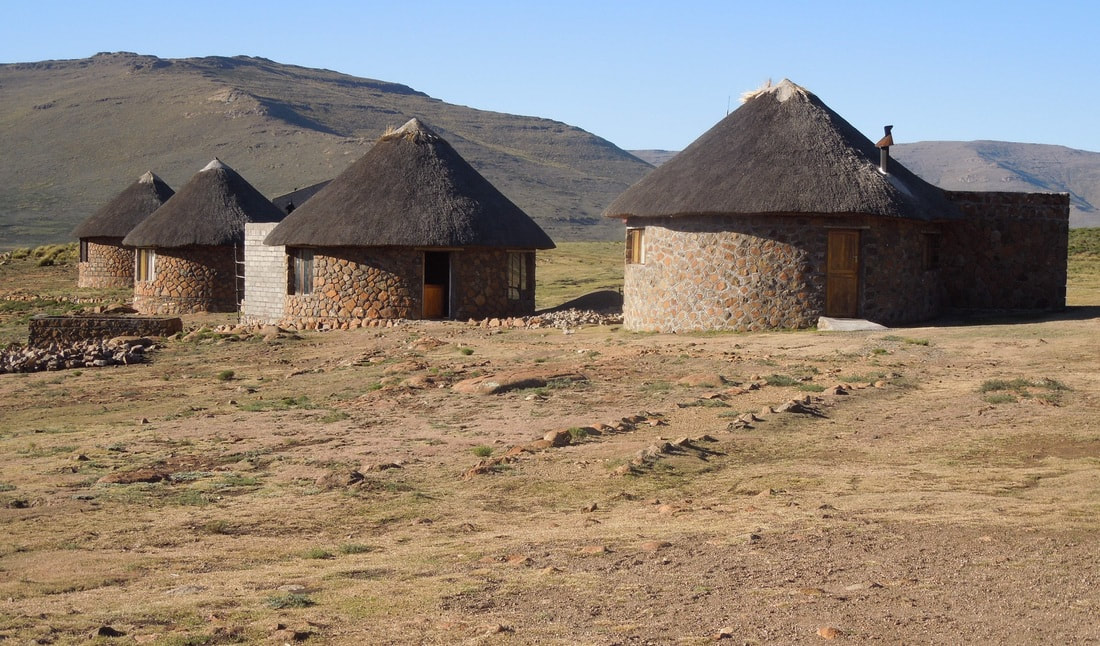 The image below taken at around 6 am the next morning. Oh so quiet save for the sheep down the hillside.

So after many restful hours under 2 heavy blankets, yes it gets delightfully cold at 2800m, I headed back to the highway where I waited and then some. 2 4x4s went by, the third one stopped, yup, that was after 2 hours 30. The road climbed again, up to 3200m and then down and down to Mokhotlong. I had planned to stay there but accommodation is not cheap, 40$+ so I was happy to find a minivan heading out. I rode until Oxbow, (below) simply a lodge in the mountains. Stunning scenery. Another dorm room just for me but the food was overpriced as is the way when you're in the middle of nowhere. 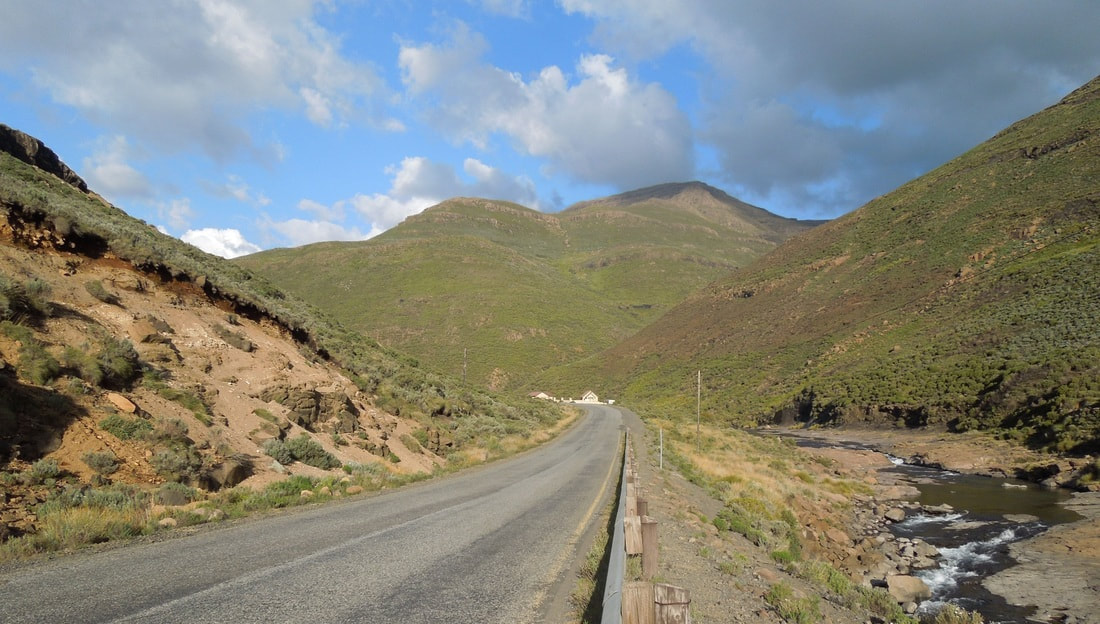 Back on the road by 9 am, got picked up by a bus from the Pitseng Diamond Mine, transporting the workers down for their 1-week RnR. I rode all the way to Maseru. I had an idea.

Across town to the ticket office and bought a bus ticket from Bloemfontaine to Sedgefield for that night. All I needed was to go get up to Maseru Bridge and cross back into South Africa, onwards to BF before 9 pm. The rest as they say is history.

So in the morning, I was in Sedgefield on South Africa's south coast. and suddenly Cape Town was just 500km away!!
This post has been rewritten for Nomadic Backpacker and is based on my travels in Africa in 2015/2016