​​June 10, 2022 | Tagged: Africa
Having just seen in The Washington Post that there was an incredible find at the Necropolis of Saqqara just outside Cairo in the last weeks, I thought I would resurrect my post from my visit to the Step Djoser Pyramid in 2015 when I backpacked from Cairo to Cape Town. 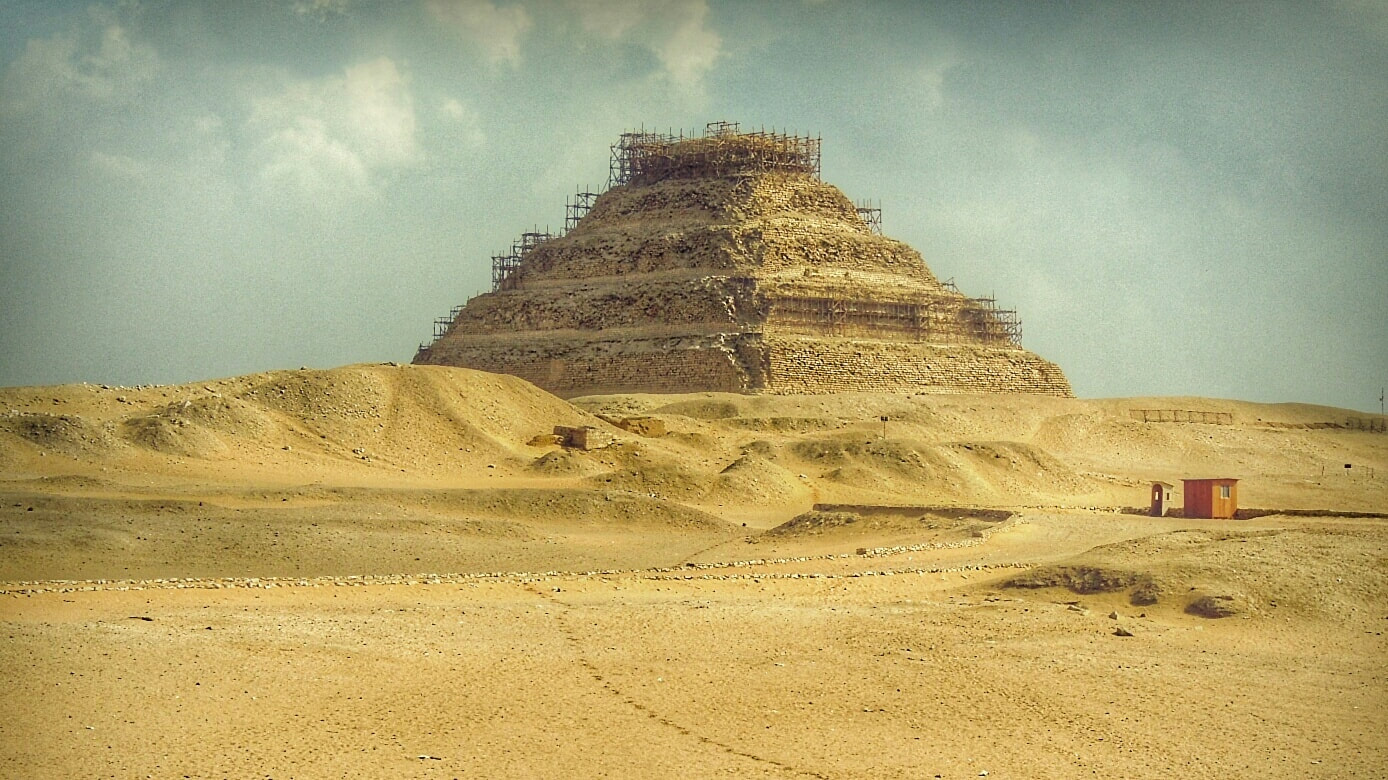 Center stage at Necropolis of Saqqara is the Step Pyramid of Djoser. Built in 27BC for the burial of Pharoah Djoser, the first or second king of the 3rd dynasty of the Old Egyptian Kingdom.

'Step' refers to the design, with its rectangular base and the flat roof. And is Egypt's oldest pyramid.

Saqqara is located 30km from the centre of the present-day capital, Cairo, just south of the much more popular Giza Pyramids.
This post has been rewritten for Nomadic Backpacker and is based on my travels in Africa in 2015/2016
Guide books and travel advice forums advise you to sign up for a tour or at least take a taxi, as there is no direct transport and getting there under your own steam is quite frankly not worth the aggravation involved. Are they joking??

The guys at the hostel told me that the info on Wikitravel was indeed BS. Yes, I needed to take the metro to Giza but then take a series of micro buses via Mansoureya.

Seems like I am now an old hand at dealing with such 'inconveniences' as I thought getting there was a breeze. Egypt is no longer the nightmare from 5 years ago for me. I calculated quickly, that I have been in 29 new countries since 2010.

The metro on a Friday morning was empty. The ride, 6 stops to Giza just 1 Pound. Down to the small micro bus parking lot for a 7k ride to Mansoureya Road (a massive overpass for the Cairo ring road), 5 pounds (overcharged I think as just 3 on the way back but in an older van). And then in another microbus down the Saqqara Road, just 2 pounds.

​My sense of direction worked just fine cos I asked to be let out at a certain road junction, which led me straight to the Saqqara complex after a rural Egyptian walk (This is before I travelled with a smartphone. I had studied Google Maps the night before and then did everything instinctively).
​
"You want a taxi, mister?"
"That's not a taxi, that's a donkey."
"Desert taxi mister. Twenty pounds. Where you from? England? That's not even 2 pounds for you, hey mister!!"
I'd walked off. 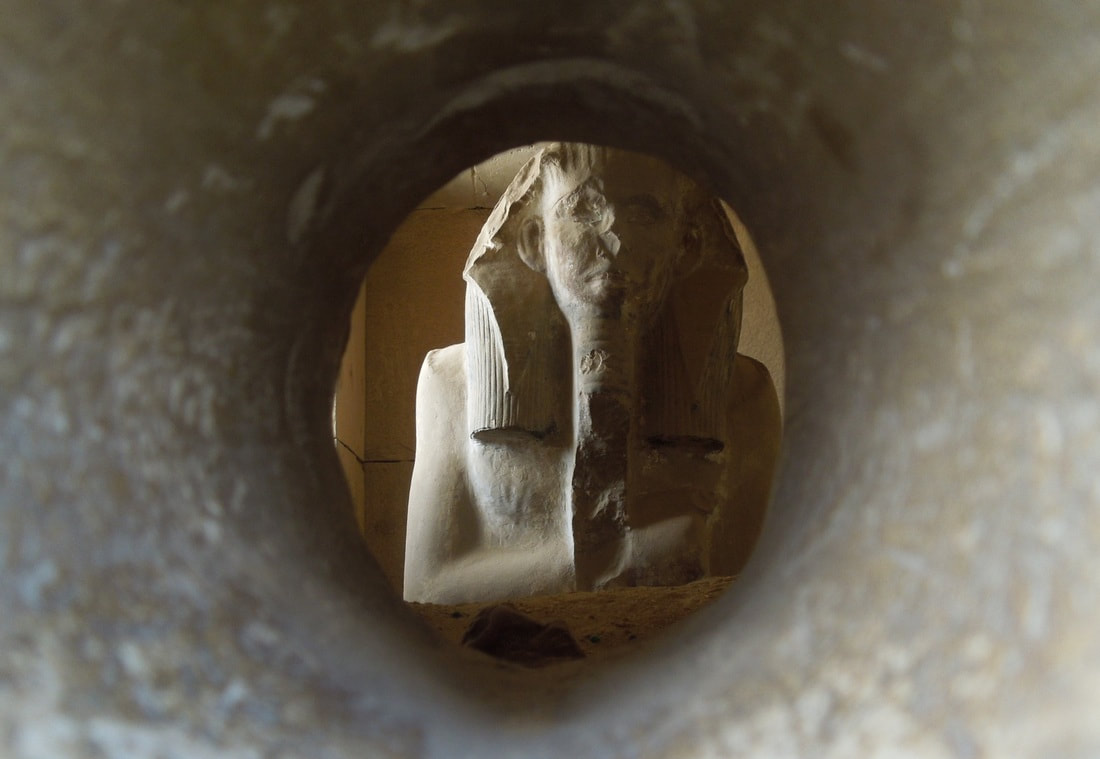 Hey, mister".. and so it goes on...
​
"You wanna go in the tombs? I have keys. A little baksheesh, just 50 pounds"
"No need for baksheesh, I have a ticket"
"Your ticket does not cover these tombs, OK, just 30"
​I walked off.
"Mister, just 20 for you"
The Serapeum is an underground burial chamber dedicated to the sacred Apis Bulls, the most important of the cult animals entombed at Saqqara. The Apis, it was believed, was an incarnation of Ptah, the God of Memphis and was the calf of a cow struck by lightning from heaven.

I showed him my ticket, he studied it, shook my hand and said "Welcome to Egypt" I was at the SERAPEUM complex which my ticket did not cover. I guess he couldn't read English.

I descended the steps into the underground chamber.

"Ticket" I heard behind me. "This is not the SERAPEUM ticket, you need a seperate ticket."

This I knew. I refrained from telling him, that the news of a possible bomb having been the cause of the crash of the Russian airliner last week, on top of the killing by the Egyptian security forces last month of some Mexican tourists, was gonna hurt him even more.

'Desperate times cause for desperate measures, I heard on a film last week. Indeed.

"Hey, mister".. does it ever stop? Nope, not in Egypt.
"You wanna see a statue?"
"where?"
"just over here. Come. A little baksheesh. Big statue", puffing his chest out like a wood pigeon. "A little baksheesh, tourism very bad now".

I detoured away. Found a vantage point and surveyed the scene.

2 hours later I was back in town, swapping one madness for another.

On the highway, a guy on a motorbike stopped for me "no baksheesh, free" and took me 10km up the road to a spot where I took a microbus which took me to another spot from where I got another microbus to Giza and thus the Metro back to town.

Later that evening as I strolled the streets, I repaid the kindness.

A school girl sitting on a blanket, on the sidewalk, with a few packets of tissues before her, hoping for a sale, doing her homework.

I felt sad for her. I come as a visitor and when things get too bad I can always leave.

​For what the touts at the pyramids were wanting, for doing little more than wishing you a nice day, I dropped the girl some cash, hoping she could at least, maybe stay at home the next night to do her homework, instead of sitting there in the dirt as Cairo walked around her.