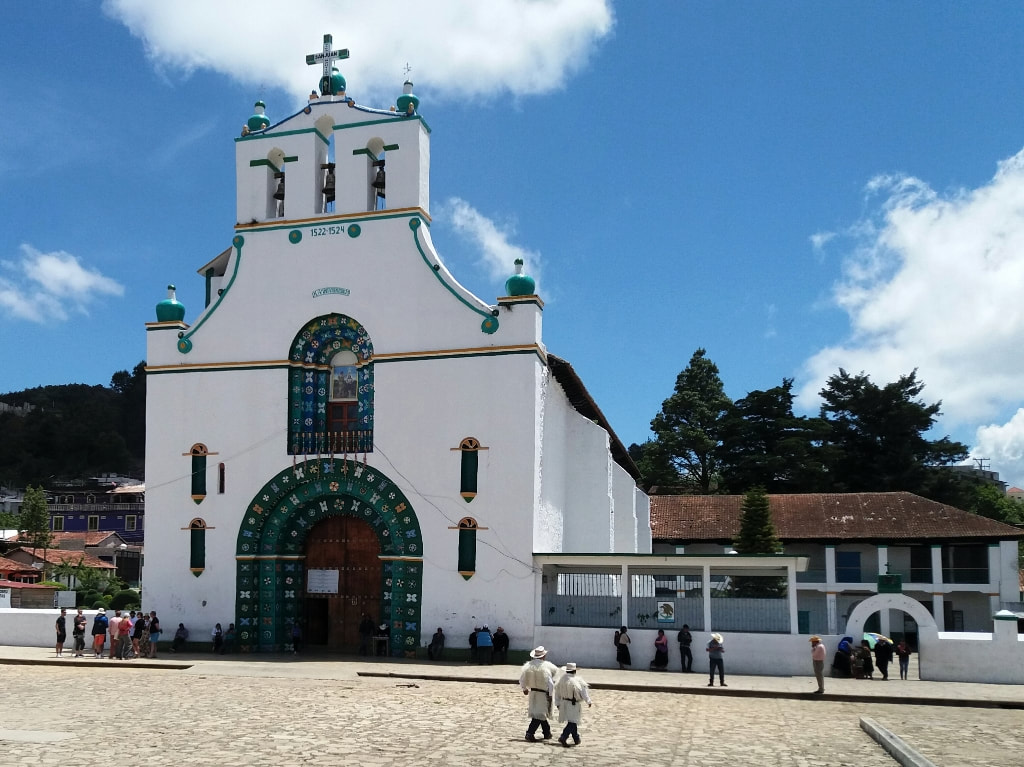 ​A visit to El Templo de San Juan Bautista will be a visit like no other.

​In fact, the small town of Chamula, full name: San Juan Chamula, is a bit like the Wild West.

​Sitting on the periphery of the main square 'Plaza de la Paz', I take in the scene as guys on horseback charge across the square dressed up in what looks like ceremonial waistcoat made from sheep.

It is I am told later, that in Chamula there are no policemen, however, there is the “traditional authority”, those who impose order in the region, the men dressed in white I saw in their shearling vests (normally with wooden batons in hand) which you can see in the above photo.

​I cross to the Templo de San Juan Bautista, built-in 1522-1524 before the Spanish arrived. The Catholic Church did not agree that it was a 'church', "because the services that take place inside were not always of a religious or catholic character, their beliefs being a mixture of syncretism", which is why it is referred to as a 'templo'. They practise their own form of pre-Hispanic Christianity known as Chamulan Catholicism. 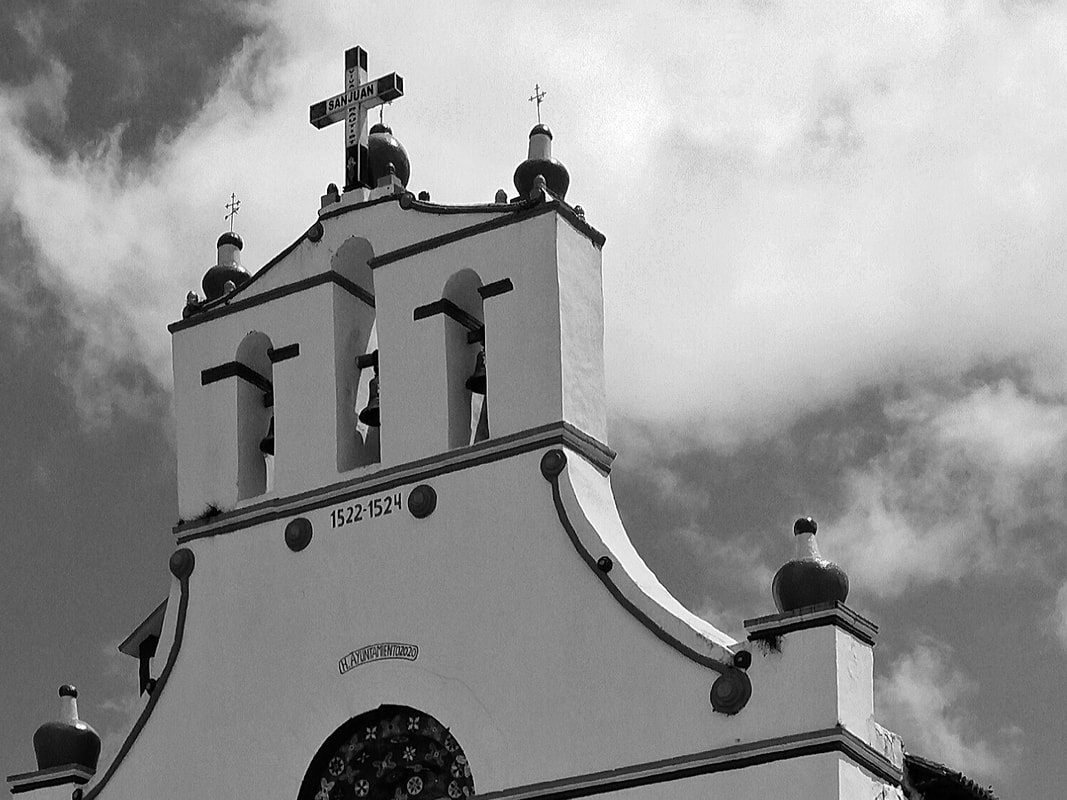 As a tourist, I pay the 25peso entrance fee and am told that is strictly forbidden to take photos or videos.

Chamula has many deep-rooted beliefs and customs and within these is the prohibition of visitors to take photographs, with the reason being that if you take a picture of them, you are stealing their soul.

EL Templo is some 15 metres wide and 62 metres long. The roof made of wood.

A brass band of sorts is playing.

On both sides of the temple are the saints inside showcases and these showcases include mirrors, which are part of the ceremonial act, the moment of confessing before them or requesting a blessing; the faithful must reflect because the Chamulans believe that they cannot lie to themselves.

At the end of the temple there are several saints without a showcase, these saints belonged to the old temple of San Sebastián, which was destroyed after an earthquake.

​The Chamulans saw that the temple was not capable of protecting itself against a natural disaster and therefore it could not protect them either and by just leaving the church and building a new one was to punish San Sebastián for not protecting their temple and them.

The marble floor is covered with pine needles which help to ward off bad energies. Families sit around innumerable candles attached to the floor. The air is smokey and heavy.

There are no priests, there are shamans (j'ilol), who guide the rituals you see which cleanse and heal the soul or disease.

It is common to see bottles of Pox or Coca Cola (which they call black water - the Chiapas are massive consumers) depending on the severity of the complication, being offered and sometimes a hen will be sacrificed. It is believed that its death will take away the evil.

They use Pox (an ancestral drink made from fermented corn) as a healing vehicle and is sometimes shared with spirits by throwing a little of this drink on the ground since it allows a connection between the material and spiritual world to be established.

Coca Cola (black water) is used as part of the ritual because the gas causes them to burp and by doing so they believe evil spirits will be expelled from the body.

A woman sits clutching a hen. It looks freaked out and seems to know its fate.

The hen is taken, it is moved over the candles as with the bottles of Pox Coca Cola in a circular motion, and is then held by its legs, its head grabbed and pulled.

With the sacrifice complete I head outside to get some air.

Colectivos run all day everyday from early until late. They go when full. I took mine from a small station on Avenida General Utrilla, the main North South drag through town (16°44′38.4″N  92°38′12.43″W). Fare is 18MXN, journey time, 20 minutes. Some stop on the main road that runs through Chamula, some stop at the central square. It's only a 500m walk. 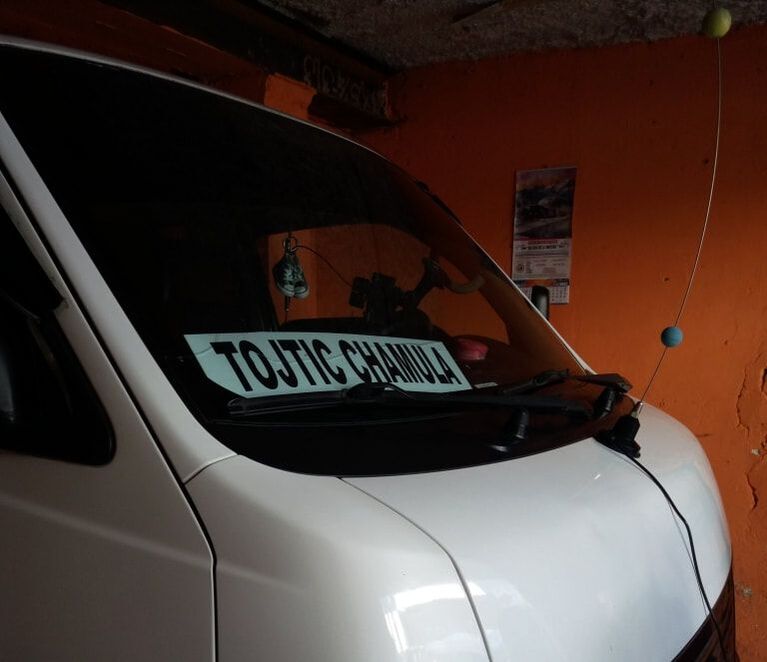