September 27 2020 | Tagged: The Balkans
Hiking from Theth to Valbona through the Accursed Mountains, a beautiful 18km hike with an extra day in Theth for some local exploration. 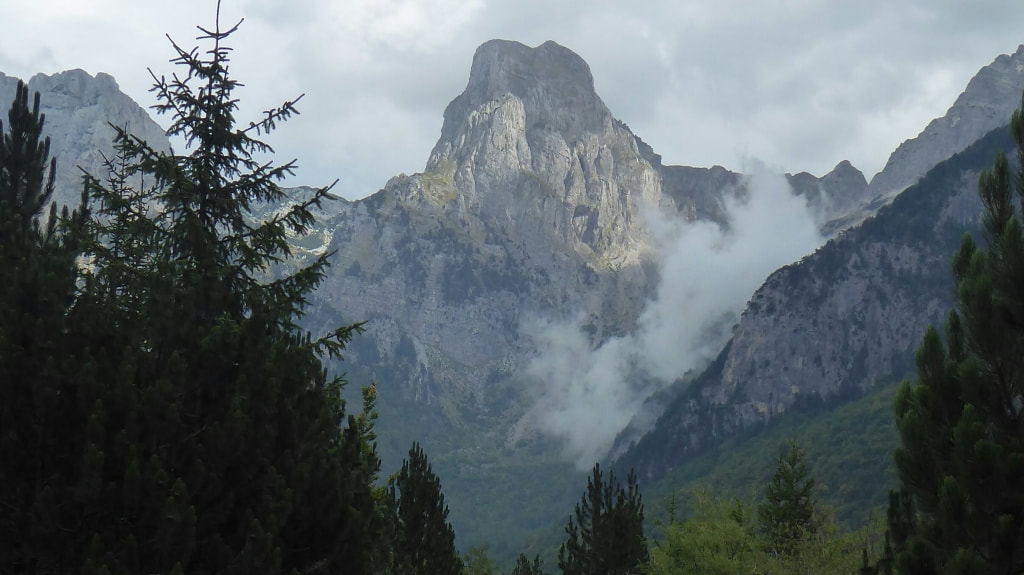 The Albanian Alps, more commonly known as The Accursed Mountains or Prokletije in Albanian, stretching more than 60km from Montenegro to Kosovo with Maje Jezercë the highest peak at 2694m, the 6th highest in the Balkans.

Lock Up Tower in Theth, right next to my guesthouse: 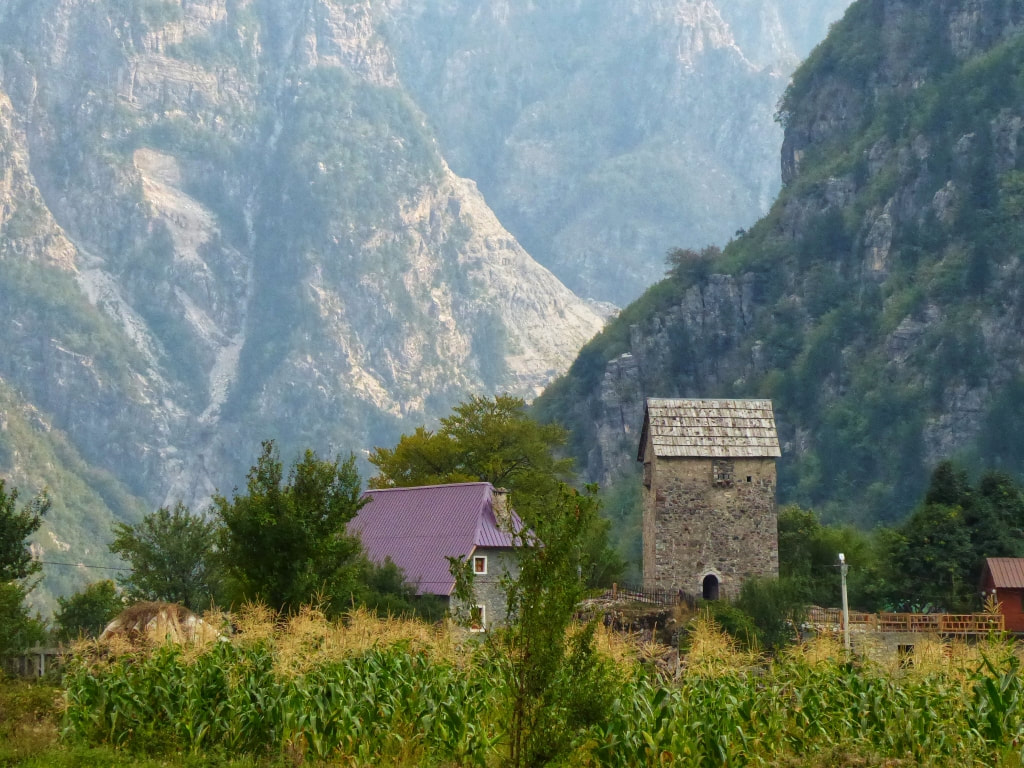 I decided on starting in Theth which is not the normal way as it involves 200m more ascent, and steeper to boot, which is exactly why I chose to do it this way.

The path up from Theth ain't so great, going up is easier with fresh legs as opposed to going down loose scree at the end of the hike. Do you see my logic?

Base camp, whichever way you do the hike, is Shkodra. And The Wanderers Hostel is far the best place to stay in town as they are the most competent at organising the transport at both ends.

They helped me out in getting to Theth after the guest house I opted for, cocked up the arrangements - I doubt they even made the call but that's another story!

I rode a shared taxi with two old ladies in a beat-up Merc. The Albanians may be pretty reckless at driving but they sure know how to drive cars designed for the AutoBahn on roads most of us wouldn't dare drive on without a 4x4. 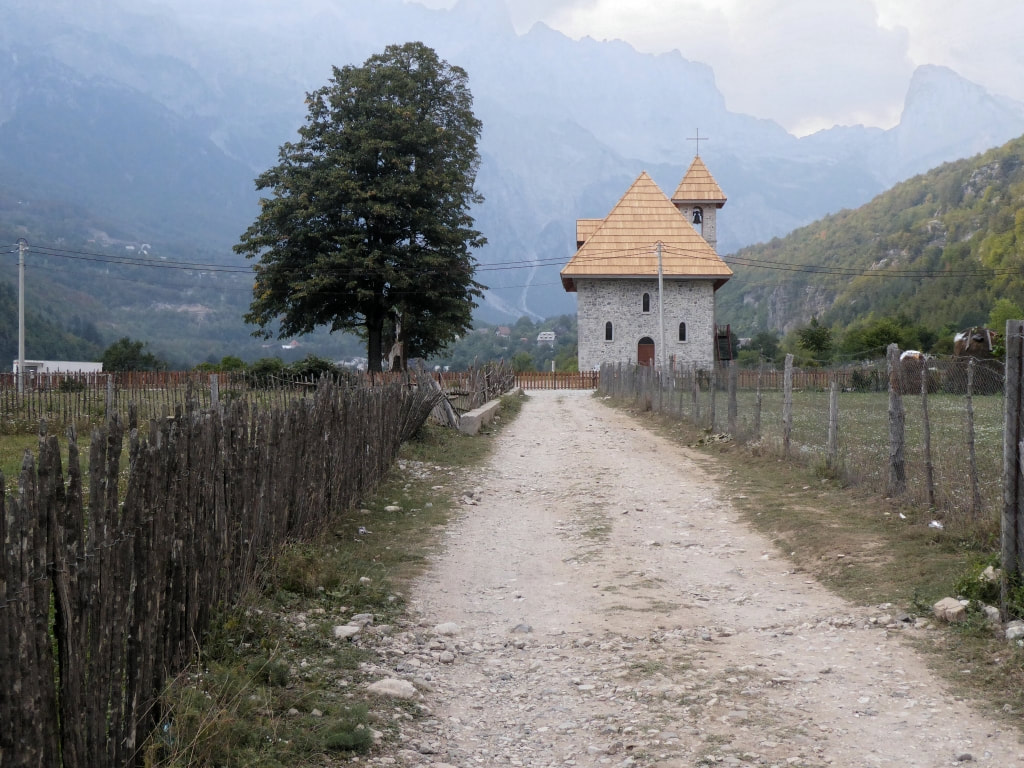 I gaily chose Shpella Guest House in Theth simply as it was the cheapest on booking dot com. 17€ with breakfast. Yes, Theth is not a cheap place! Midweek at the end of September and I was the only guest. Weekends are, they tell me, a different story. This is on the map with locals!

They didn't have a set dinner so on the first night I chose fërgesë, from an Albania only à la Carte menu. And washed it down with a beer: 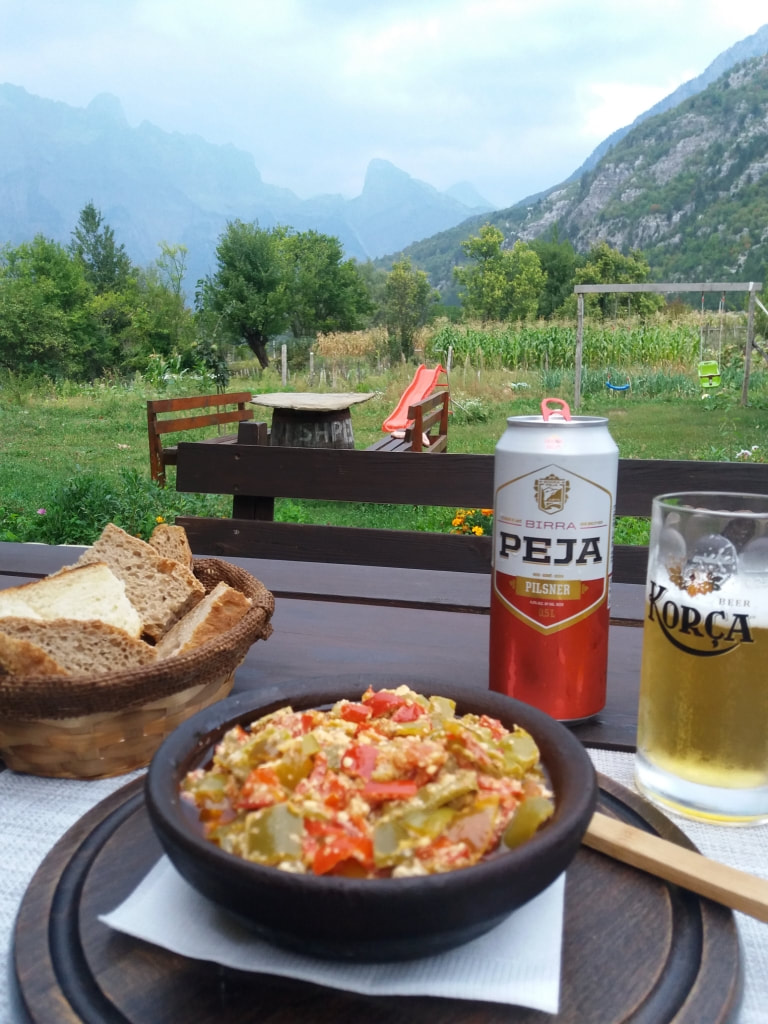 It had been suggested that if I had time, I should take an extra day to explore Theth or more appropriately the trails at the other end of the valley. I went to the waterfalls and continued much further along the river and a bit of improvised bushwhacking and a river crossing to take me back to the dirt road and then I recce'd the Theth Valbona trail out of town a ways as there are a few misleading paths.

The waterfall is hidden on the left side of the image below and you can see the river in the valley which I crossed a few kilometres beyond the scope of the photo and the road/track on the right side I ended up on: 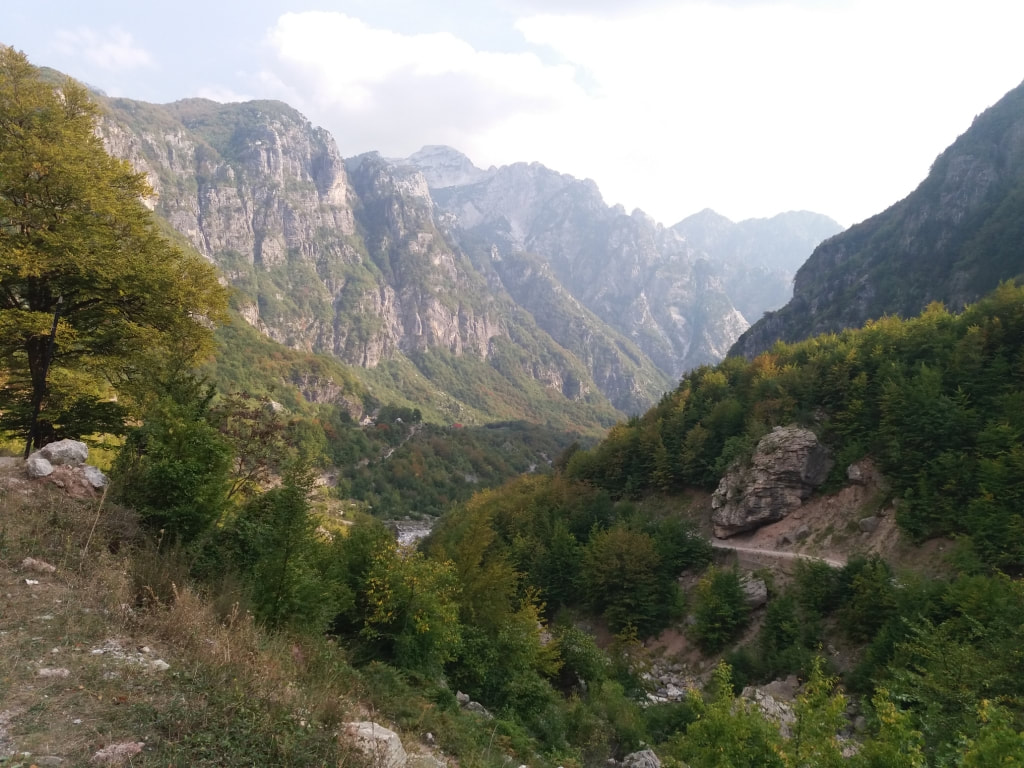 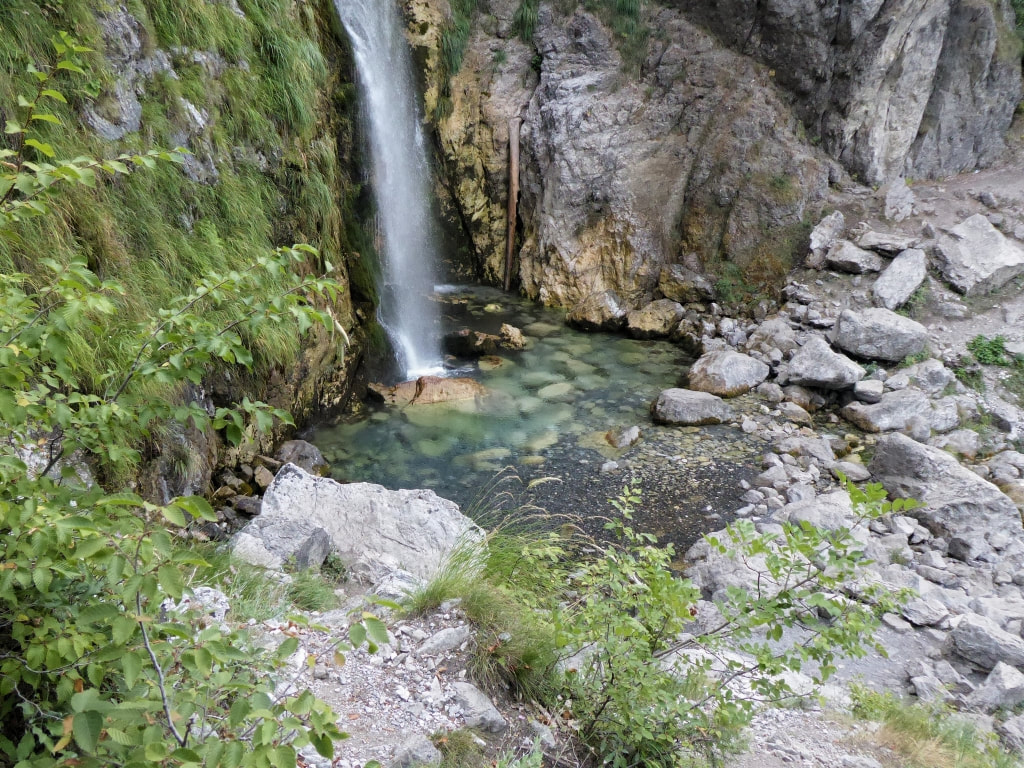 The day of the hike:

The weather broke the previous afternoon. It rained and thundered all night. Not heavily but deffo not ideal when hiking over an exposed mountain pass but at 7:30 am there was a hint of brightness and I made the decision to go. I ate as much as I could at breakfast. Had filled up 2 900ml coke bottles the night before to let the water warm up a bit as it's mountain water: freezing cold. I drank 500ml with breakfast and refilled before I left.

I was a bit apprehensive. The walk was the hardest thing I was doing in quite a few years. And it involved at 1100meter climb over 6.5km, plus 2km from Shpella before the uphill started and a steep descent for 3km down the other side followed by a longer and easier section to the trailhead.

I was unsure of my fitness and concerned about the weather.

But it turned out well. Not ideal for those perfect photos but for the actual hiking, it couldn't have been better. Here you can see the track out of Theth: It gets much steeper! 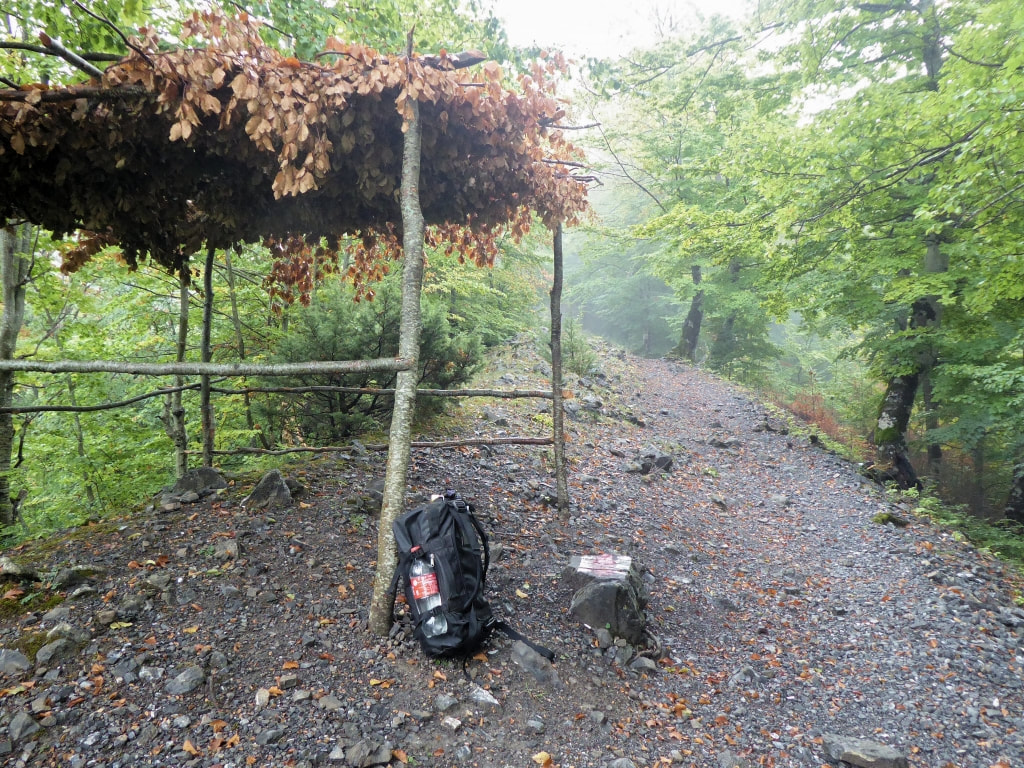 And suddenly you pop out of the tree line: 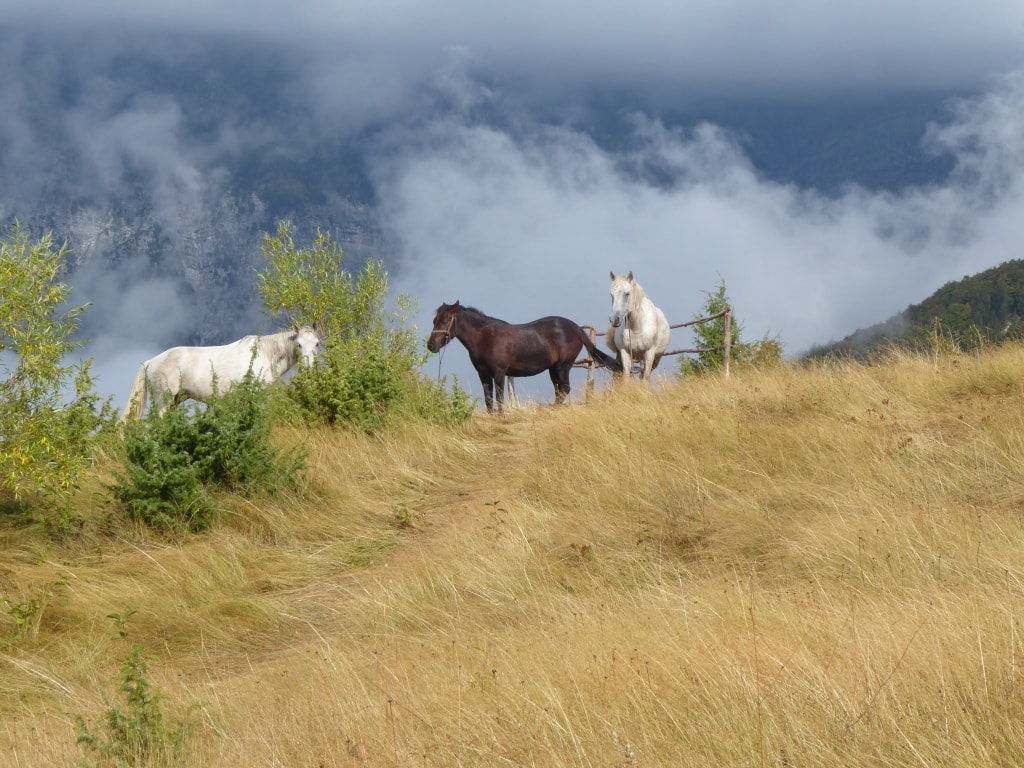 I made a short video at the top (all videos on this site are raw/unplanned/unedited):
And a long descent into better weather: 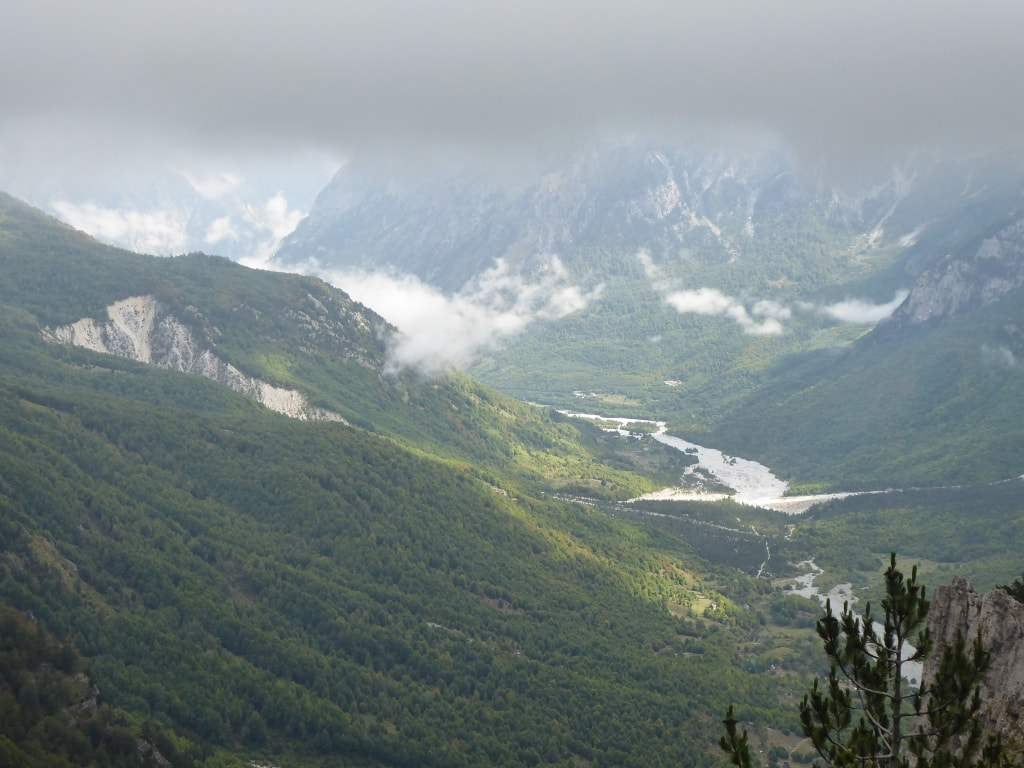 The pass @1815m is in the top left corner of the image below: 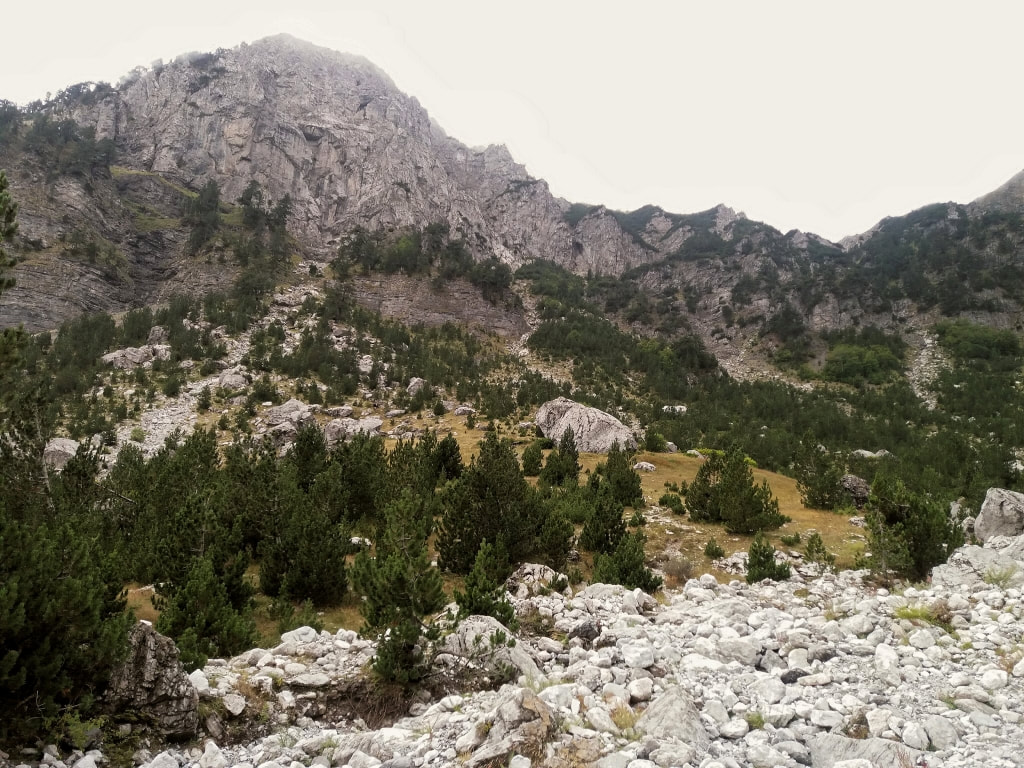 On the final leg, easy now, but on a mission to beat the weather. 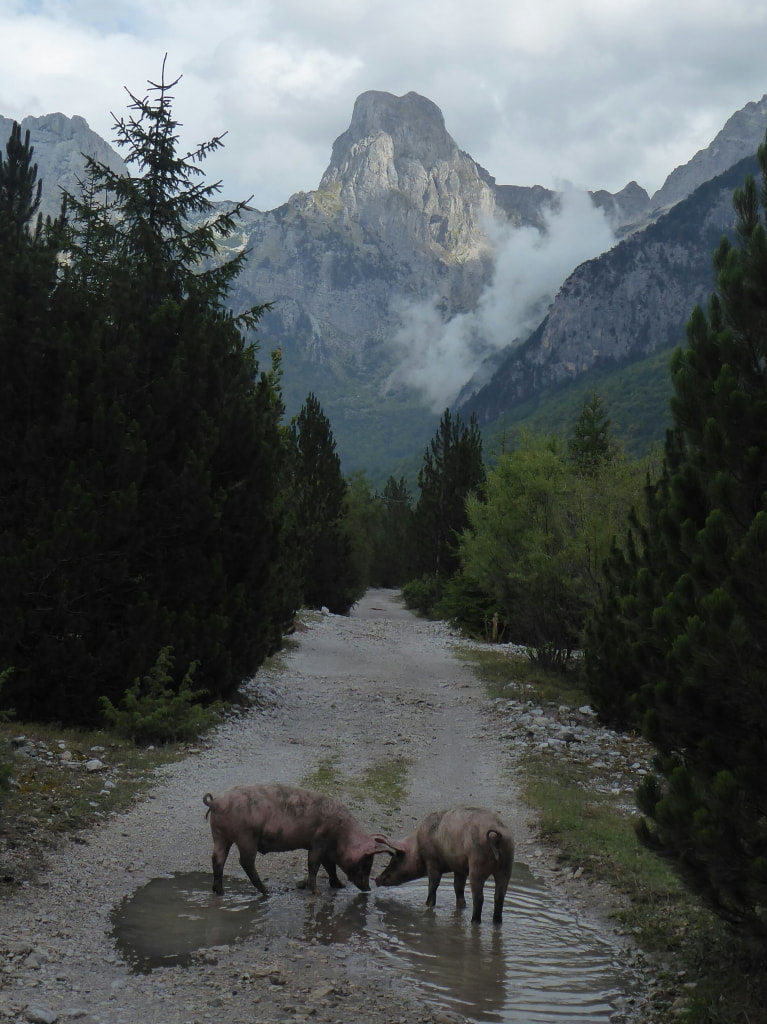 And finally at the end of the trailhead and a walk mostly along the river bed and finally the tarmac road.
​The heavens opened and I snuck into a hotel to wait it out. The guy there called the Arben Selinaj Guest House, the one The Wanderers Hostel told me about, and the guy came and picked me up. Just as well as it poured for 3 hours and the temperature dropped, as it does at 950m asl.
​
Job did. 18km in 6 hours, including a 30 minute stop. 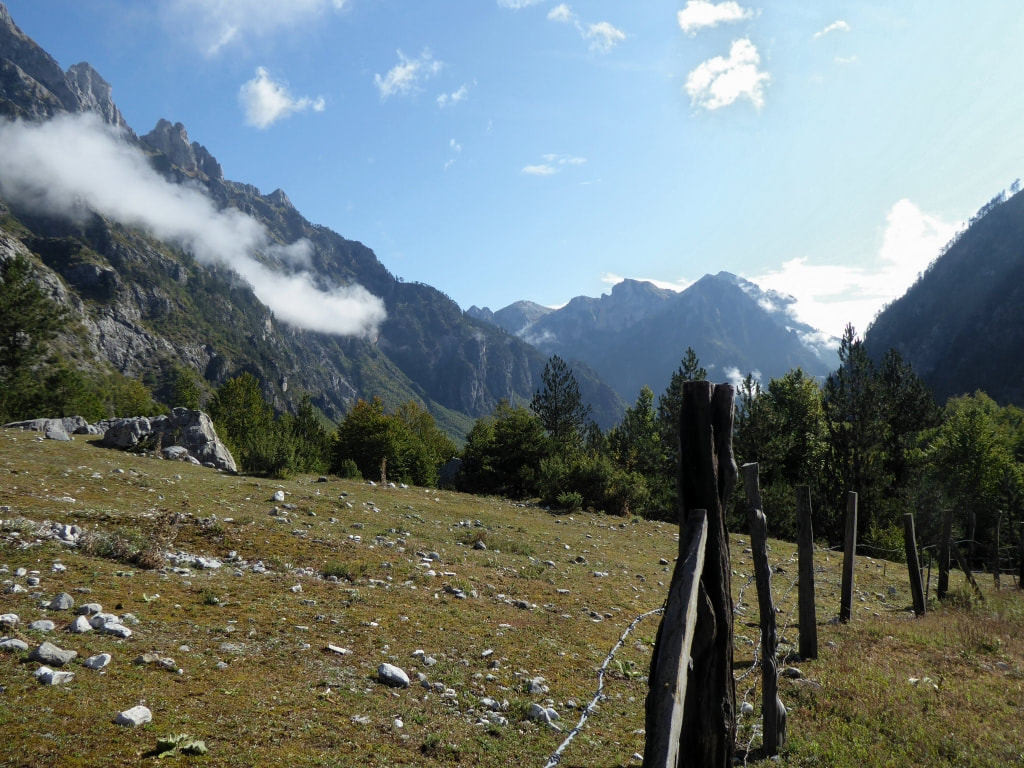 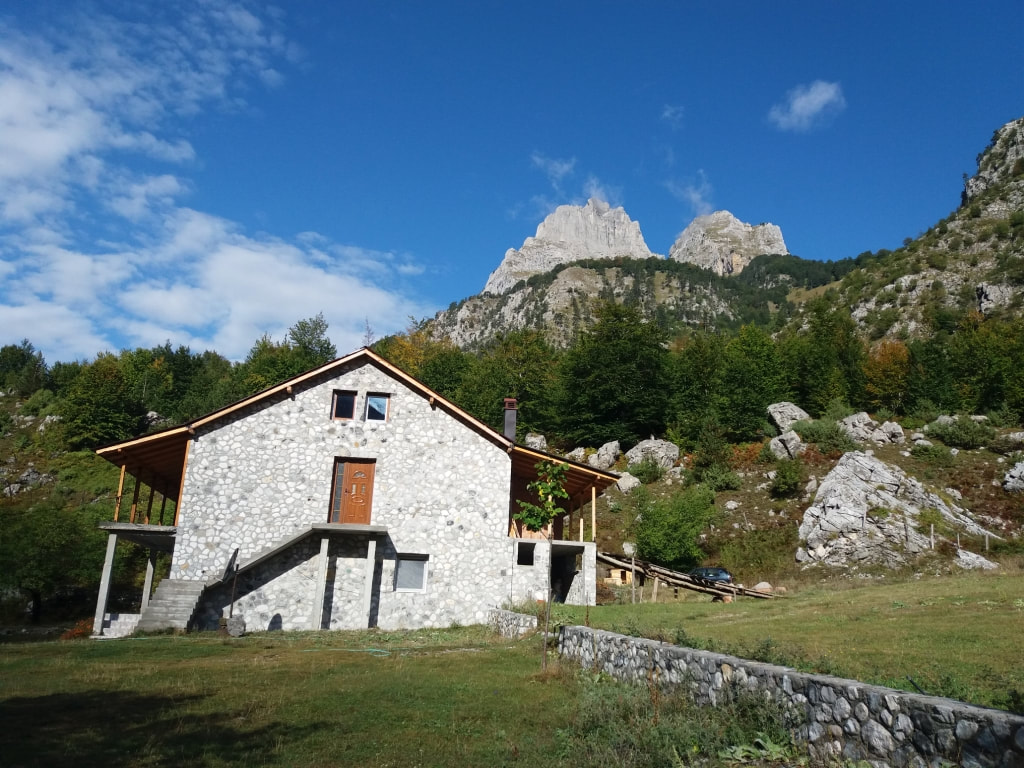 ​This is a mountain hike. There is no mountain rescue service so dress appropriately and take a dry set of clothes. The paths are at times confusing. If getting lost is your thing load up on Maps Me.

How to get from Tirana to Shkodra by bus:

Buses from Tirana to Shkodra leave from the new bus station which is a 50 minute walk from Skanderbeg Square, about 20 minutes further than the old one. It was moved in October 2019:
Arrival point in Shkodra is:
The fare as of September 2020 is 300 LEK and the journey is about 2 hours. Departures from Tirana are hourly. I took the 11 am bus!
Logistics - Shkodra to Theth:

The Wanderers Hostel found me a ride but normally, minivans to both Theth and Valbona pick you up at 7 am. The fare to Theth is 10€. In my Merc, it took 3 hours. Longer for the minivans.

The only way is to walk!

This involves road transport to Fierze, a ferry on Lake Komani until Koman and a minivan back to Shkodra.

The family at the Arben Selinaj have a deal with The Wanderers Hostel in that tourists pay a fixed fee and when doing the loop in the more popular direction, includes transport to Koman, the ferry ride to Fierze and Arben comes and meets the ferry.

This is Corona 2020, in case you had forgotten and tourists are a bit thin on the ground and were lucky that some tourists were coming from Shkodra that needed picking up. I, having decided to not follow the crowd by starting in Valbona, but in Theth, would have been faced with a difficult time getting to Fierze had it not been the case.

​Be sure to mention The Wanderers Hostel. It makes life easier and cheaper. I am not getting paid to name drop here. No sponsored posts!

The ferry goes at 1 pm. Kill time in the cafe. You arrive in Koman at 4.30 +/- and a 2-hour minivan ride over potholed roads along Lake Komani.

I have produced a post detailing the Lake Komani Ferry, so be sure to check it out!
​