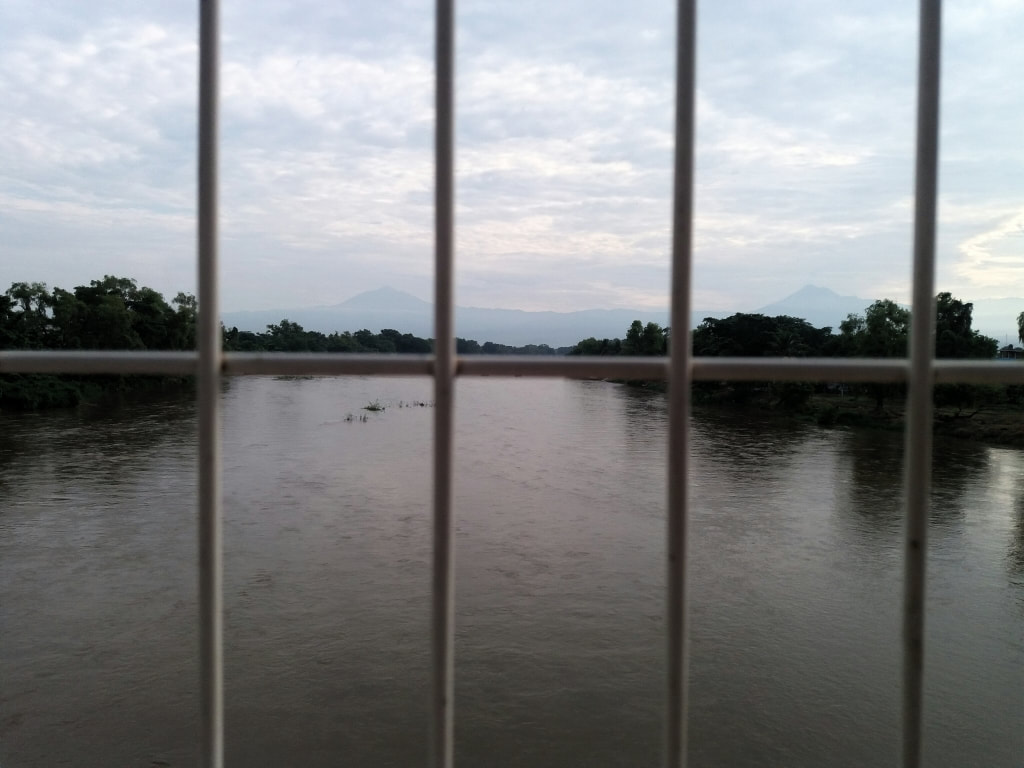 My journey from Mexico to Guatemala begins in San Cristobal de las Casas and ends in Quetzaltenango using the Hidalgo/Tecun Uman border crossing.

This post details all the logistics for that journey, details correct as of May 25 2021.

​Keen to avoid the main La Mesilla border crossing and also on the search for something less sheep-like, I am also a fan of making life more adventurous (can be confused with the word 'difficult)',
​
The easy choices in life make us soft!

I identified a less used border crossing: The Hidalgo /Tecun Uman border crossing.
​​I made a note of the distances for the upcoming journey with costs that I paid using MXN as a base-line:

Total costs including 1 nights sleep saved by doing things the 'hard way, 440MXN. Compare this with the 1000MXN for the boring and expensive tourist shuttle and that is a day trip. You still gotta fork out a nights accommodation of 100MEX +/-. Almost 600Pesos saved. You'd be very happy if you found that in the street!

If ever there was a time to discuss the differences between a traveller and a tourist, now would be perfect!

Long term budget travellers, this is the only blog you should be following. I can't attempt to document the whole world but am getting there. All these 'saving you money blogs', my arse!

***
​
Getting from San Cristobal to Tapachula:

At 9.10 pm we 3+baby were collected by a regular colectivo for the ride to Tuxtla. Makes sense. Why provide their own vehicles for so few passengers. Out source it! 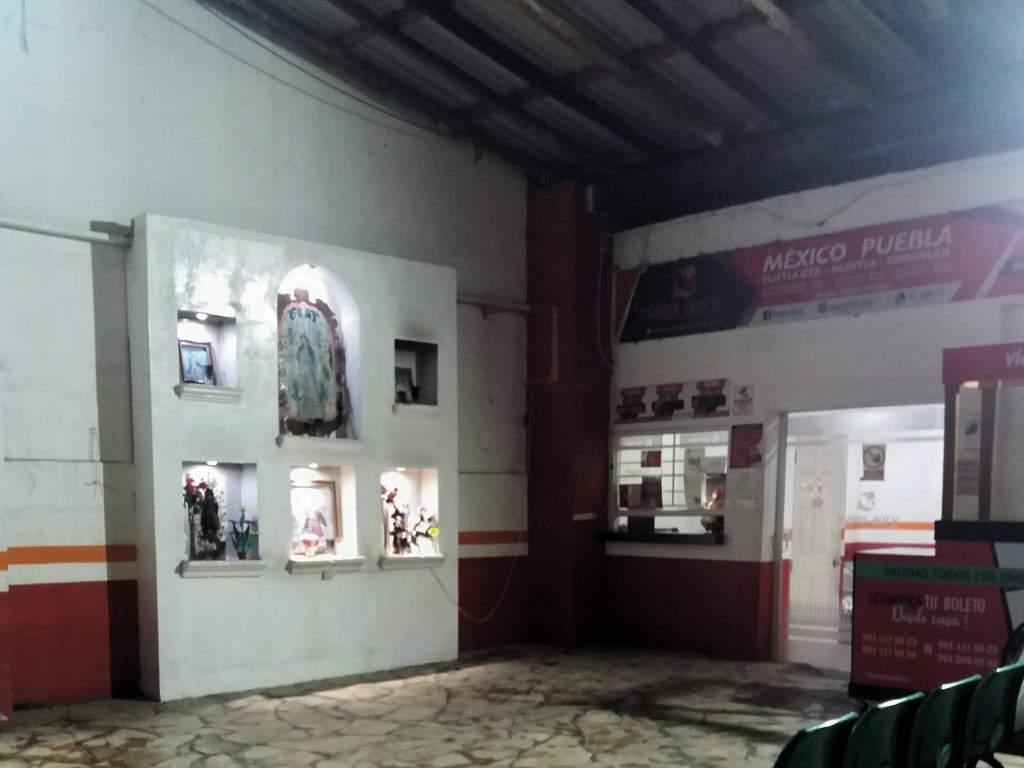 ​We didn't leave Tuxtla until 11.20 pm. Waiting makes you tired but leaving later was actually a good move. The bus awaits in Tuxtla: 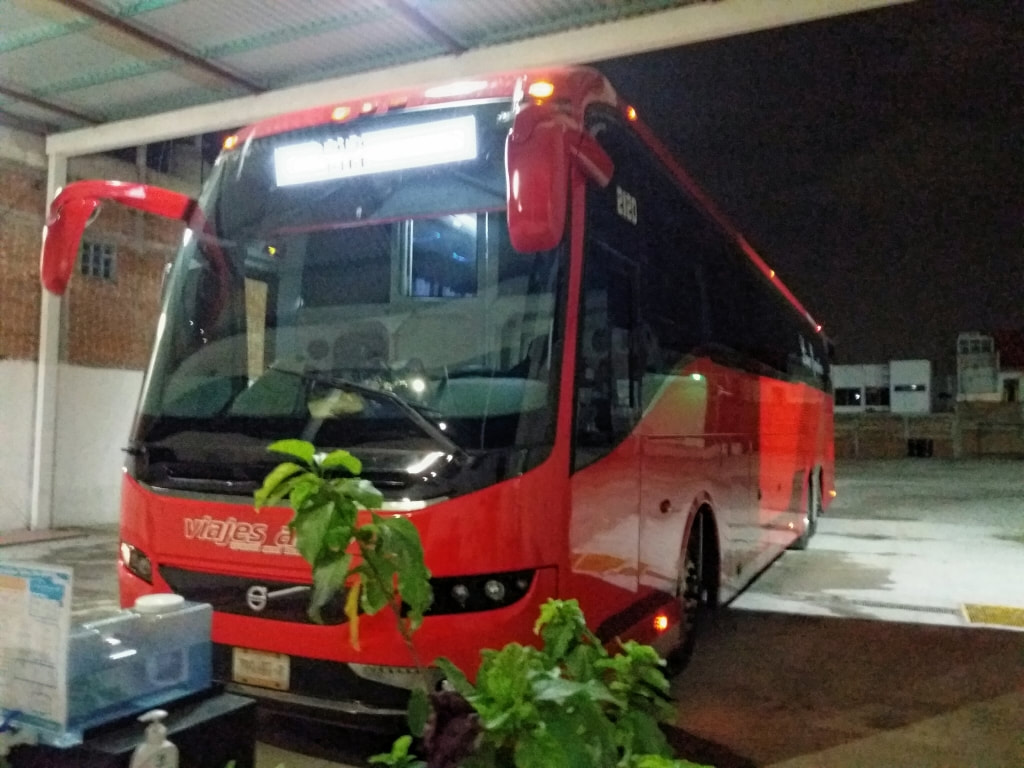 ​The bus stopped once to pick up a few passengers and that was that. No toilet break. The bus had a typical Mexican bus set up. A toilet but no running water to wash one's hands after. I guess you only use it to piss.

Thank God we all carry hand sanitiser these days.

Arrived in Tapachula at 4.50 am. It was still very dark. I needed to stay put for a bit.

At that moment I was regretting my choice. I has asked when buying the ticket as to what time we would arrive. Between 5 and 6 am I was told and new very likely, that meant a lot later. Not in this case.

I should have taken a colectivo to Comitán and gone via La Melissa. The popular border crossing was still possible without taking the tourist shuttle.

I remember in South Africa when I arrived in St Pietermaritzburg at 4 am. I had used the biggest bus company then and their terminal waiting room was not 24/7. But in my research, I found that across the road, there was a 24/7 McD. That was my backup plan. But shit, only the drive-thru was 24/7, the actual restaurant didn't open until 6 am.
I waited with the taxi drivers and later learned this had not been a good idea. But I survived until 6 am when McDs opened.

Bus stations in the hours of darkness are my least favourite places ever.

I needed to get to Ciudad Hidalgo which was 39km away. I knew there was transport there but was not sure exactly where it departed from.

The cleaner in the OCC bus station had a US news feed running on his cell phone. I asked him about this. He listens to improve his English. Clearly cleaning is not his dream job. Good on him!

I asked about transport to the border. He put me right. The stop was on the next corner.

I waited literally 2 minutes. Was hard to see the 'ruta' as the colectivos drove past quite fast. But I learned the system. They all had different paint jobs depending on their destination. 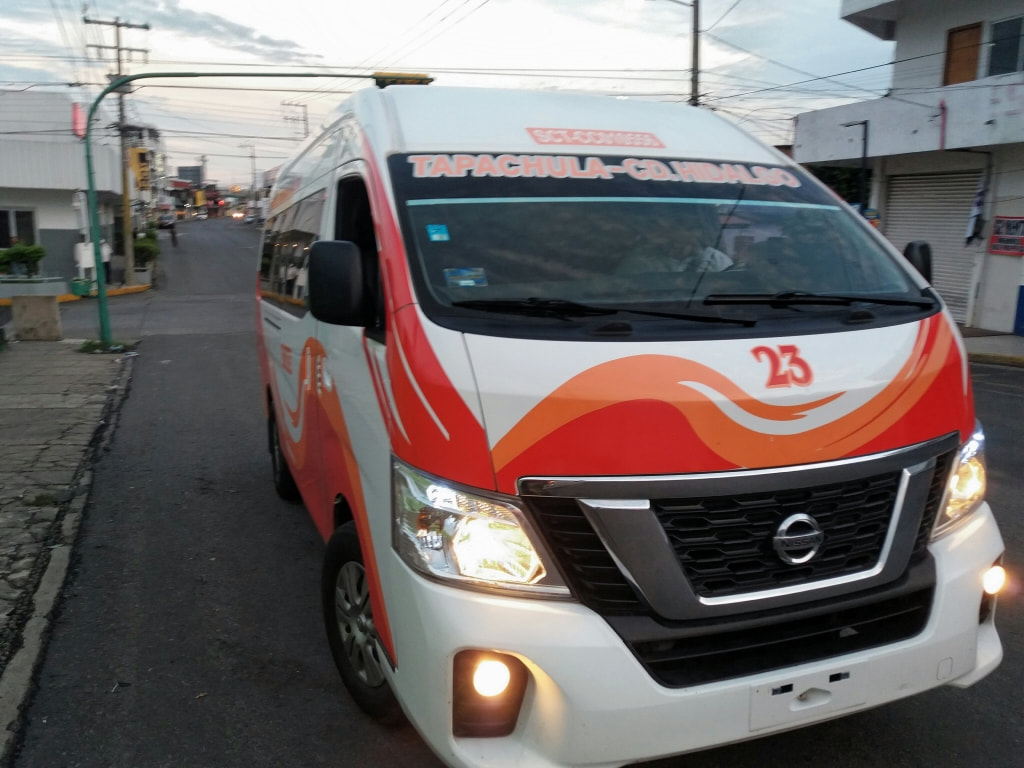 I bought a coke and water.

I walked to immigration. It seemed quiet. I waited behind 3 others and then within minutes, loads of people arrived.

Did the border open at 8 am?  Questions were barked and a load of people went to another desk. The people in front of me explained the situation. They were arriving in Mexico and had ID cards.

I know a brilliant idea. Let's get everyone to stand together irrespectively if they have just crossed into Mexico or if they are leaving. Also, a great initiative is to only employ people who only speak Spanish. It reminded me of Sudan. Such a wonderful land with awesome people who all speak English, except the police and immigration officials.

I went to my window, she processed me without a single word, a smile costs nothing eh! and put my exit stamp on yet another blank page. Bitch!

Why do they do this?

My entry stamp was clearly visible, also which was put on a brand new page back in December.

Is it a power play? They can so they do?
​
My passport showing the Mexico entry stamp on the right page and the exit stamp on the left page and also the Guatemala entry stamp, thoughtfully put on the same page: 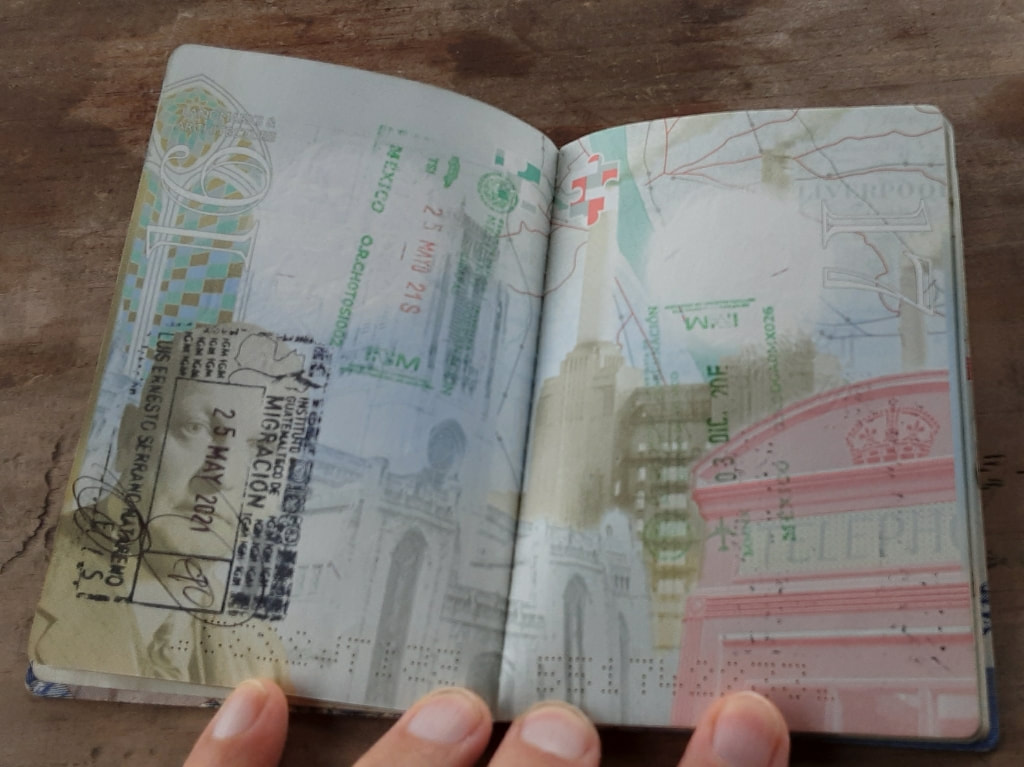 ​I waited outside for 'un momento', was then asked, 'why are you still here? You can go'. I didn't waste my breath.

There is a turnstile, 5MXN for foot passengers just to cross the bridge. What a joke.

I walked across the bridge, ignoring the guys shouting 'cambio', shot some photos and arrived at the Guatemalan immigration. 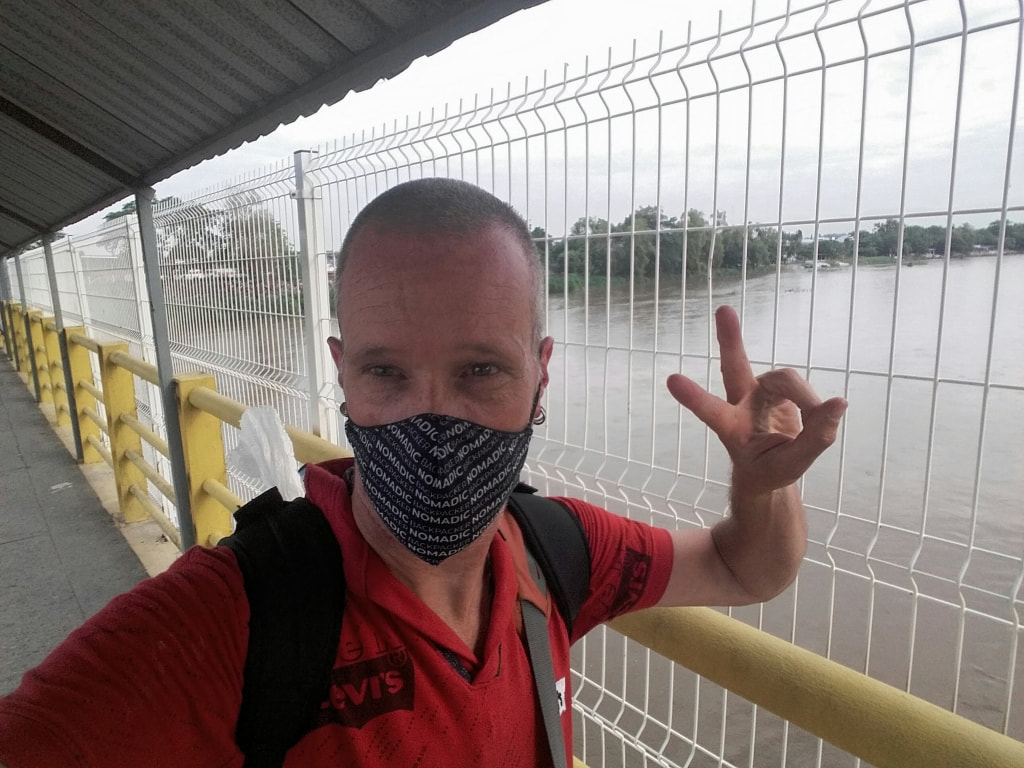 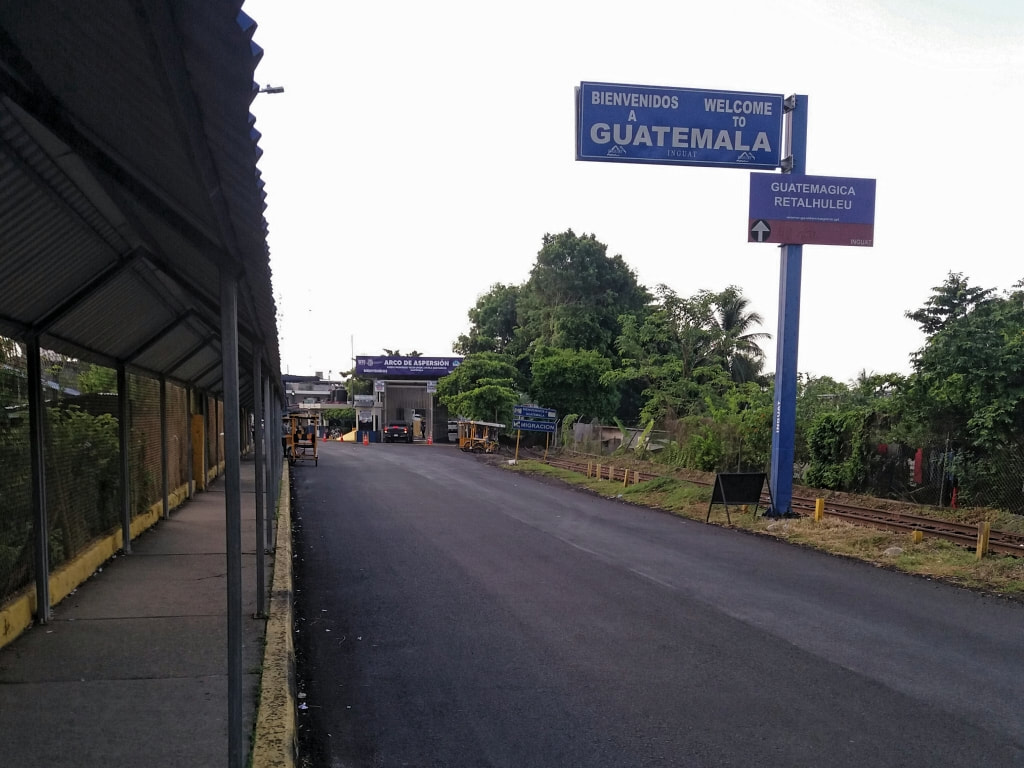 ​Here the officials spoke good English. I was processed quickly.

A health inspector asked me for my Covid-19 Antigen test result. He wanted the two copies I had prepared and then I was free to go and backpack Guatemala, country no. 99,  92 UN countries and 7 others that I think are worthy to be on my own list.

I found a cycle rickshaw to take me to the bus station. 10 Quetzals. 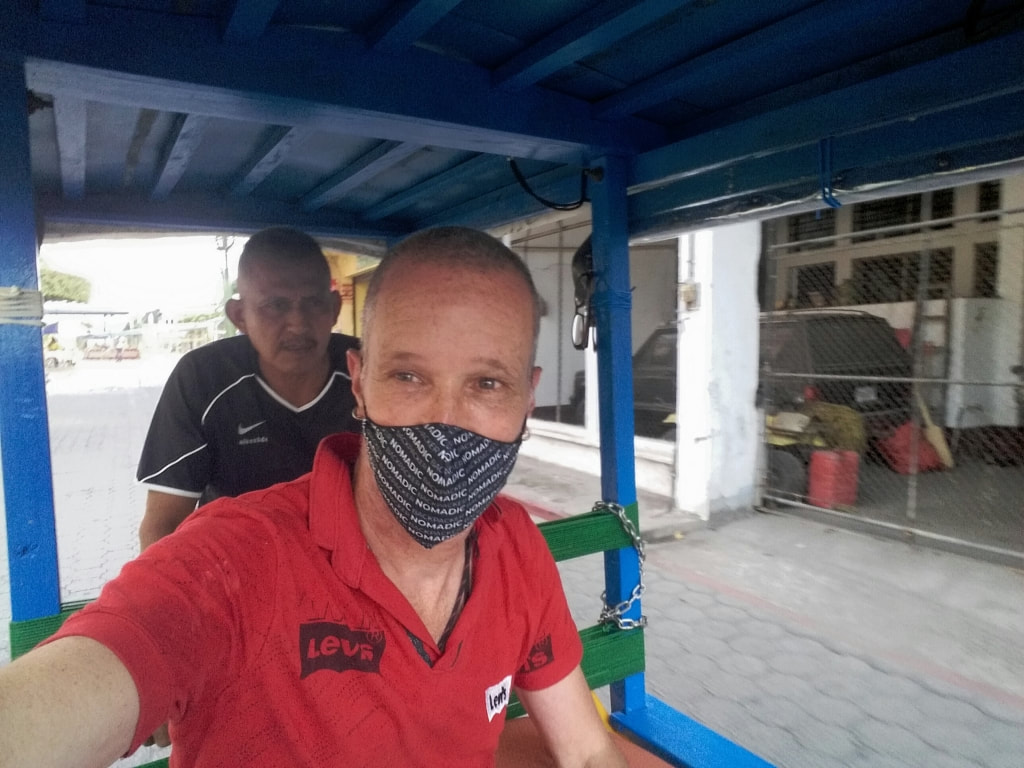 ​And almost immediately I was travelling in an old minivan bound for Coatepeque. 20 Quetzals. The 37km took +/- 40 minutes. 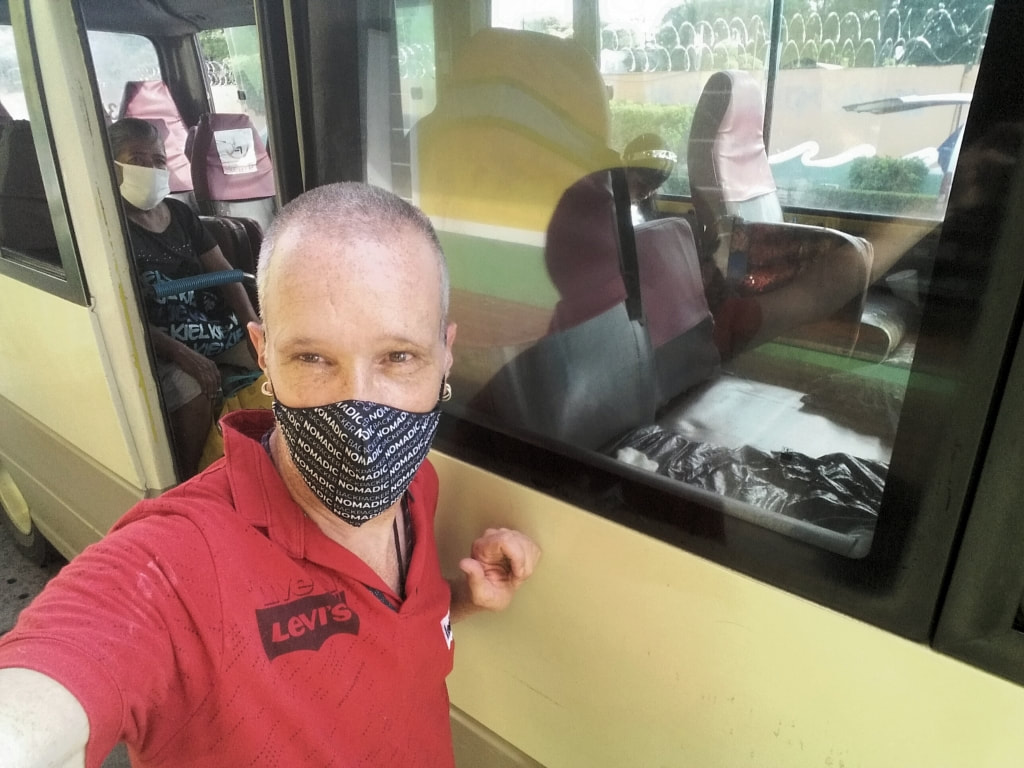 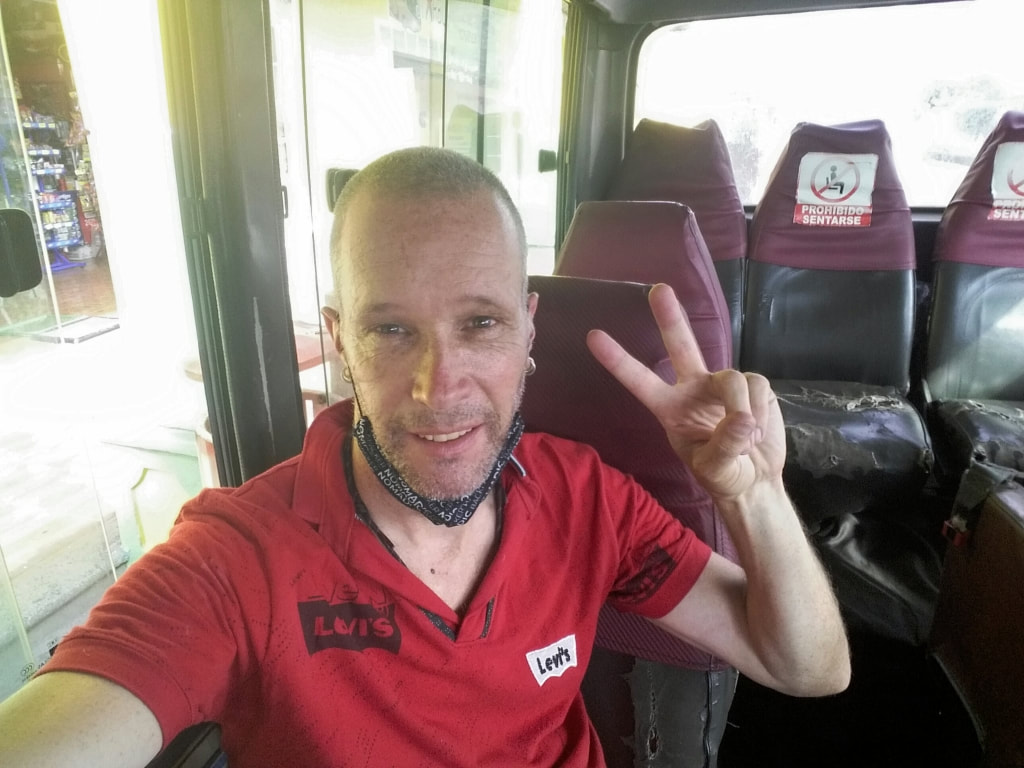 ​We arrived in town and the driver's mate indicated I should get out and walk an undisclosed no. of blocks to where I would find a 'bus grande' for Quetzaltenango, better known as Xela, pronounced Shella.

I always make a note to always stay on the bus to the terminal unless I get kicked out first.

This is a long term traveller tip. This way you know exactly where the bus terminal is! Bus terminals get relocated and GoogleMaps ain't always updated! But see the note in the next few paragraphs!


I asked a few people. They pointed back the way I had come. I saw a 'bus grande' and went to check it out. Yes, the Xela bus would leave from this random spot on the high street and would be along soon: 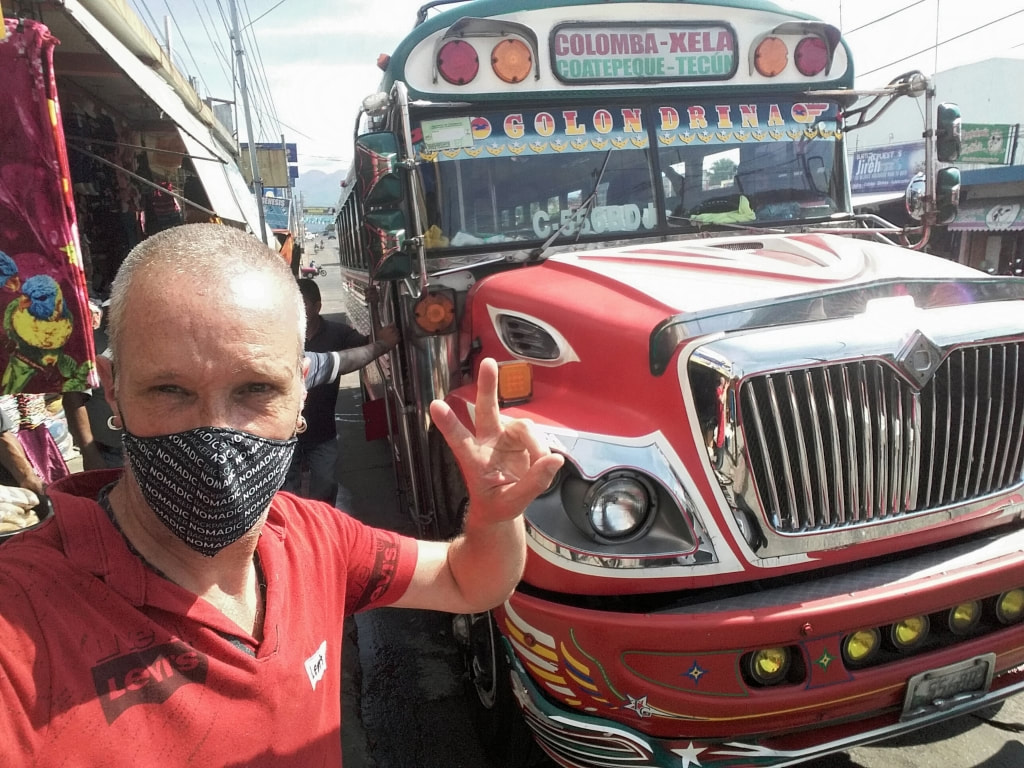 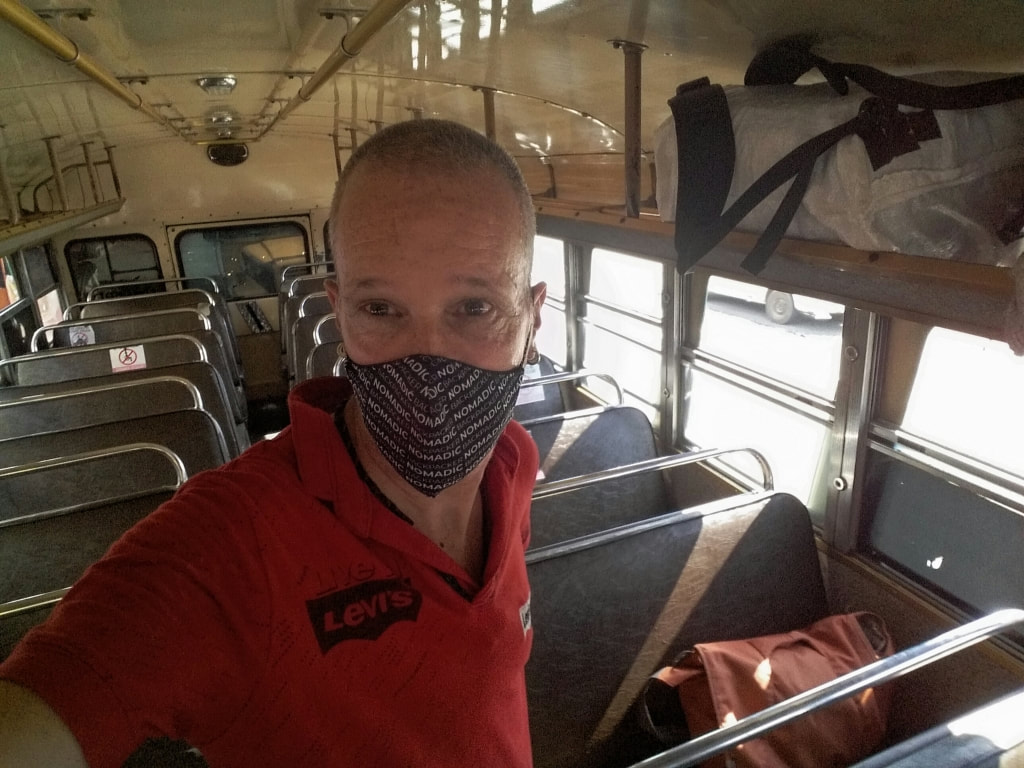 The ride took 2 hours 30 due to heavy traffic coming into town. 30 Quetzals. Arrival point is the Minerva bus station, a chaotic mess, not really a bus terminal per se. More like a massive piece of wasteland used for convenience.
​
I actually jumped out 1 block before. This is another long term traveller trick I sometimes deploy, as long as I am pretty certain about where the terminal is. This way, I get to avoid taxi drivers and touts, the people who, the world over, I loathe.

And so. Guatemala. Let's see what you have to offer!