March 3, 2020 | Tagged: Africa, Border Crossings
This is my experience of travelling from Mali to Cote d'Ivoire, using the Zegoua/Pogo border crossing between Sikasso and Ferkessedougou, in February 2020 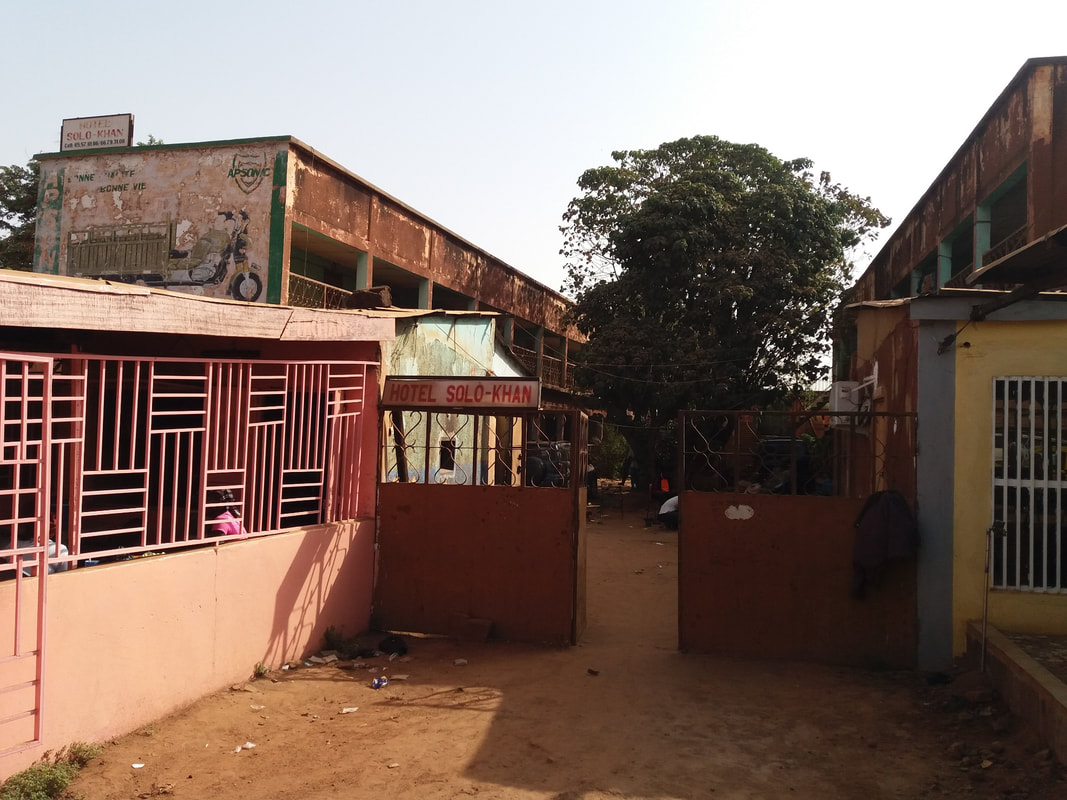 ​Having left Bamako I spent the night in Sikasso at the Solo Khan hotel (above). It's conveniently located (the recommended Tata Hotel is the other side of town) as all buses arrive and depart within 200m but that's the only thing it's got going for it.

​Hotel Desperation would have been a more suitable name. But for west African standards, it's a run of the mill cheapie. 8,000 XOF. The 5,000 option was just too grim to consider. Not that the 8,000 XOF was much better but at least the mattress wasn't like a hammock and I had my own shower.​ 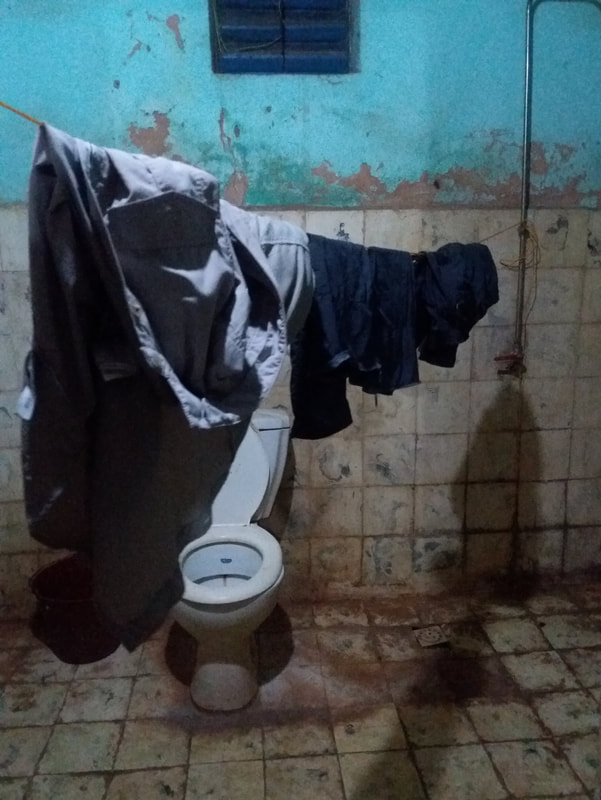 ​The room was cleaned while I waited. Floor swept and mopped and a fresh sheet given.
I put my washing line up and immediately washed my mozzie net. It was black after a week in Bamako.

I went walkabout. The main street is being dug up. It's dusty like crazy.
I snuck into a shop for a cold cola. It's 40 degrees out. I found some fresh baguettes and later a tin of sardines.

And 2 signs at the junction to Burkina Faso in Sikasso. 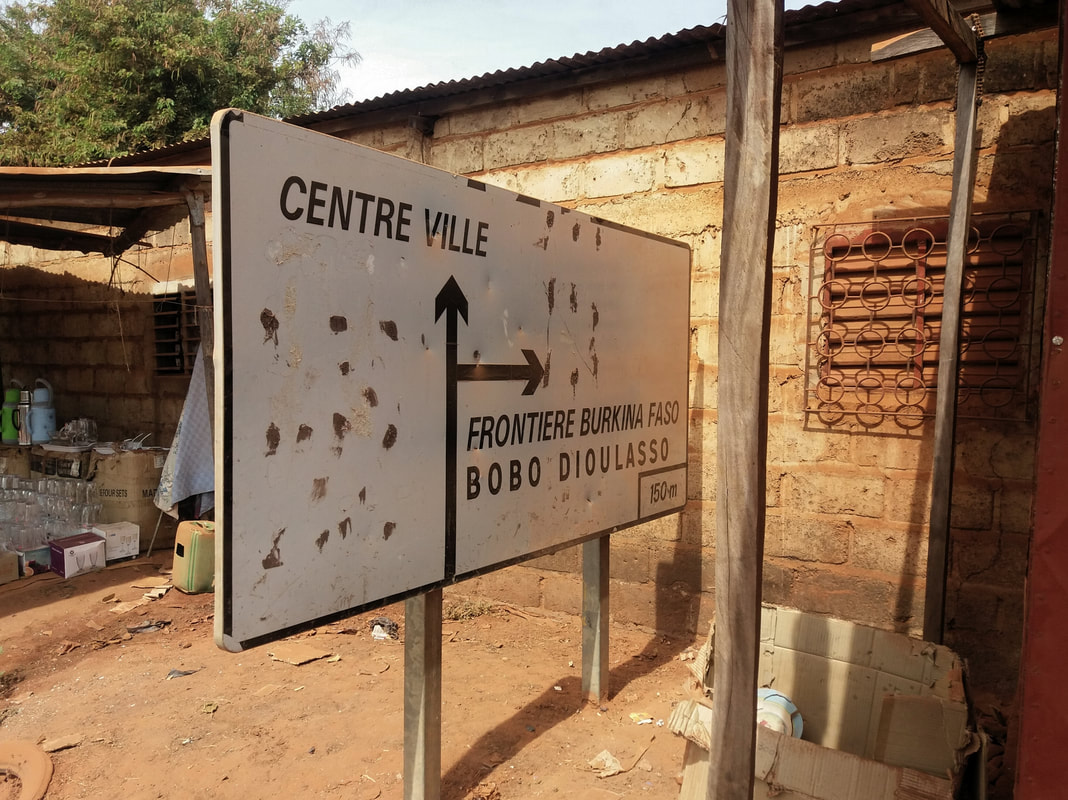 Shame this wasn't to be. Too many things kicking off just now. 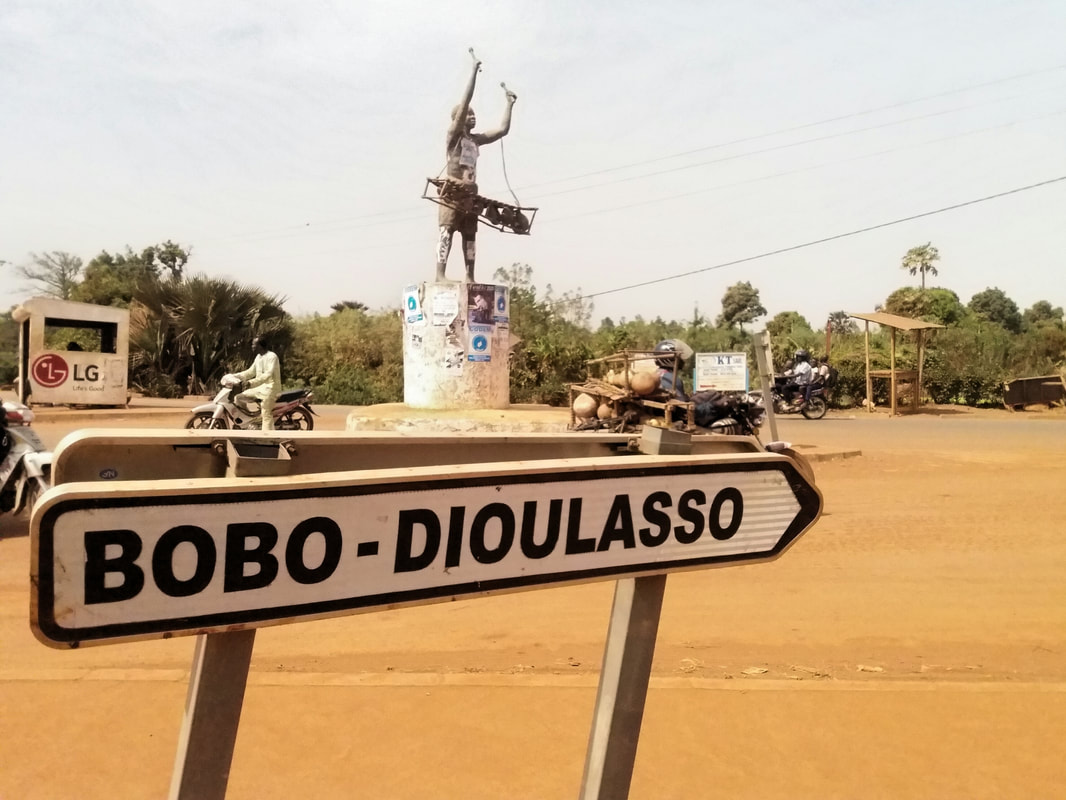 The rest of the afternoon and evening I dozed. I had no appetite. I went in search of a beer. 3 likely looking places didn't have any, so I went to the garage for a bottle of water and found a small selection. I bought 2 cans. 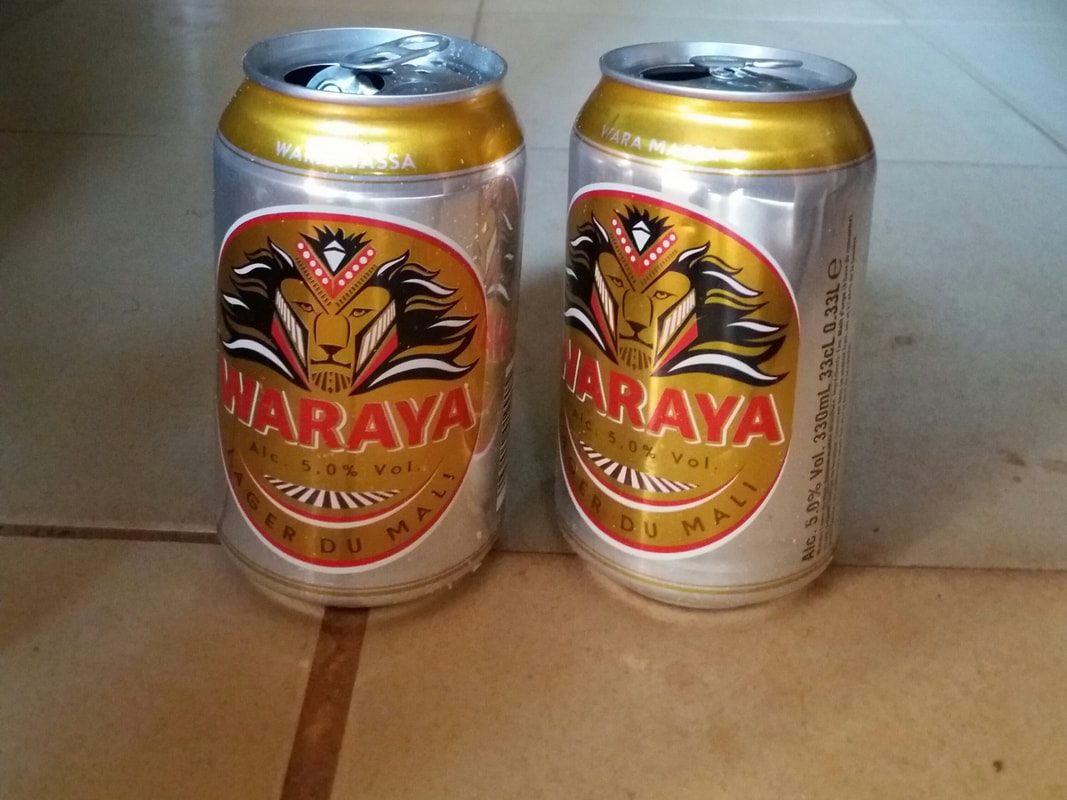 The room is full of mozzies. I turn on my torch which I leave under the mozzie net. Switching off the main light I find that the light has attracted small flies which get in through the netting. I switch off my torch, turn on the bathroom light and they all vacate asap.
​
Braving the mozzies I wash the rest of my clothes and take a shower.

Considering everything I sleep ok but my eyes feel gritty and all puffy and my throat is sore.

I head over across the road and buy a ticket on the 10 am to Ferkessédougou. 7,000 XOF. It should be around 250km with a border crossing thrown in for good measure. I would like to be able to get a ride to Kong, 2 hours east of town. Let's see how the day goes.

I find a coffee stand and get 2 coffees in a glass and further down the road a baguette with chips and beans.​ 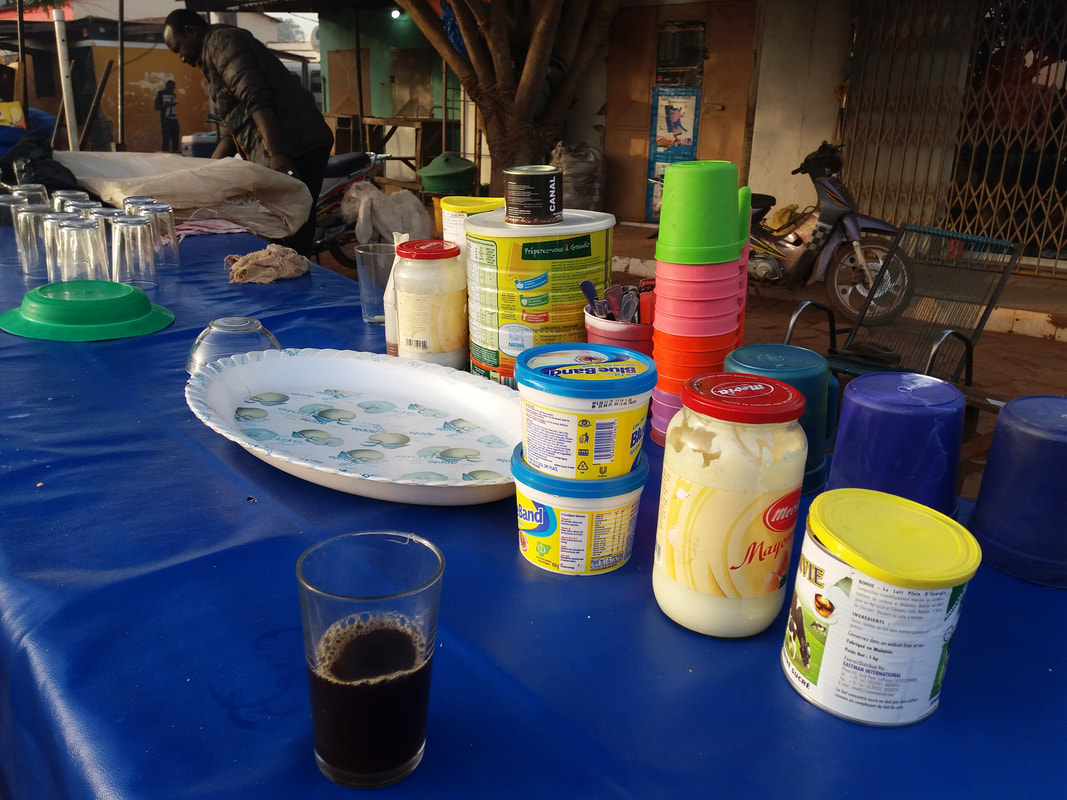 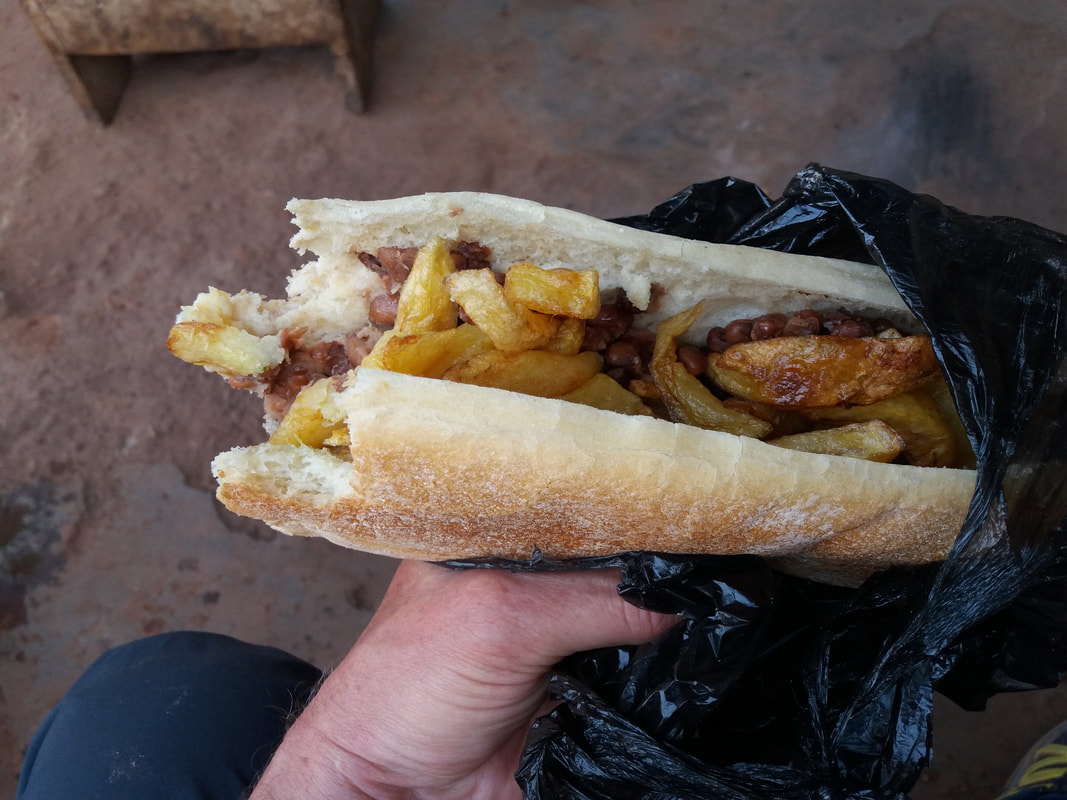 Back at the hotel, I pack up and kill time writing.

I do a quick money check. 20 nights using the WEST AFRICAN FRANC XOF. The budget has gone a bit out of the window. Not including the Mali and Cote d'Ivoire visas, daily costs average out at 23USD a day

It is what it is. I ate well in Bamako and drank a few beers each night. It's tough here. I needed to have a few home comforts for my sanity.

Anyways, back to the journey to the border. I was at the station just after 9. Of course, there was a problem. Not enough passengers so a few of us got taken to another bus but seems like it was now overbooked.

Everything became a blur. I couldn't grasp exactly what was going on and their solution. I just repeated that I didn't understand. Which was true. I didn't. They just repeated everything trés rapide. They gathered I didn't get it so they just found me a seat. Then everyone got off, except me, tickets checked, except mine.

The bus is as dusty as hell. I bang the seat and get a big cloud of dust. It's gonna be one hellaver long day. We left at 10.20. Not too bad I guess.

There's no AC and there are no windows to open. The driver has some religious bollocks blaring out. It's hot and it gets very hot later on.

But the road was in good condition.
​
We arrive at the border post in Zegoua.

Checking out of Mali is easy. Then we drive the 4km to the border post at Pogo. Despite already having a Cote d'Ivoire visa, it took them an hour to process me. My details were taken by 3 different guys, all took a photo of me, all asking the same dumb questions, all putting my name as TREVOR BRITISH and nationality as Irlande.

Of course, they wanted to know my profession and hotel in Ferke. I didn't have a reservation nor a phone number to give them nor did I have a CDI or Mali sim card.

Eventually, someone called them back and I was stamped in.

It reminded me of Sudan where people speak English except for the Police. I used to imagine the job advert:

"Policemen required. If you have any grasp of the English language, do not bother to reply."

​Mali exit stamp on another brand new page. But at least the Cote d'Ivoire guy had the sense to not waste space. 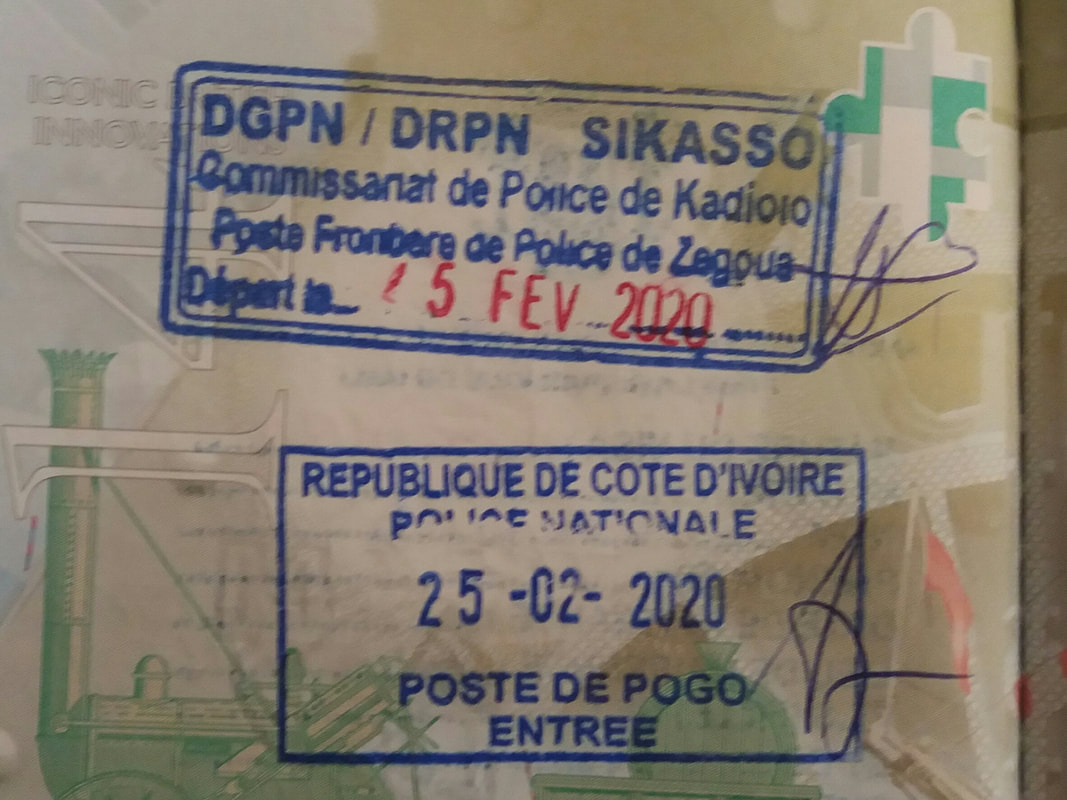 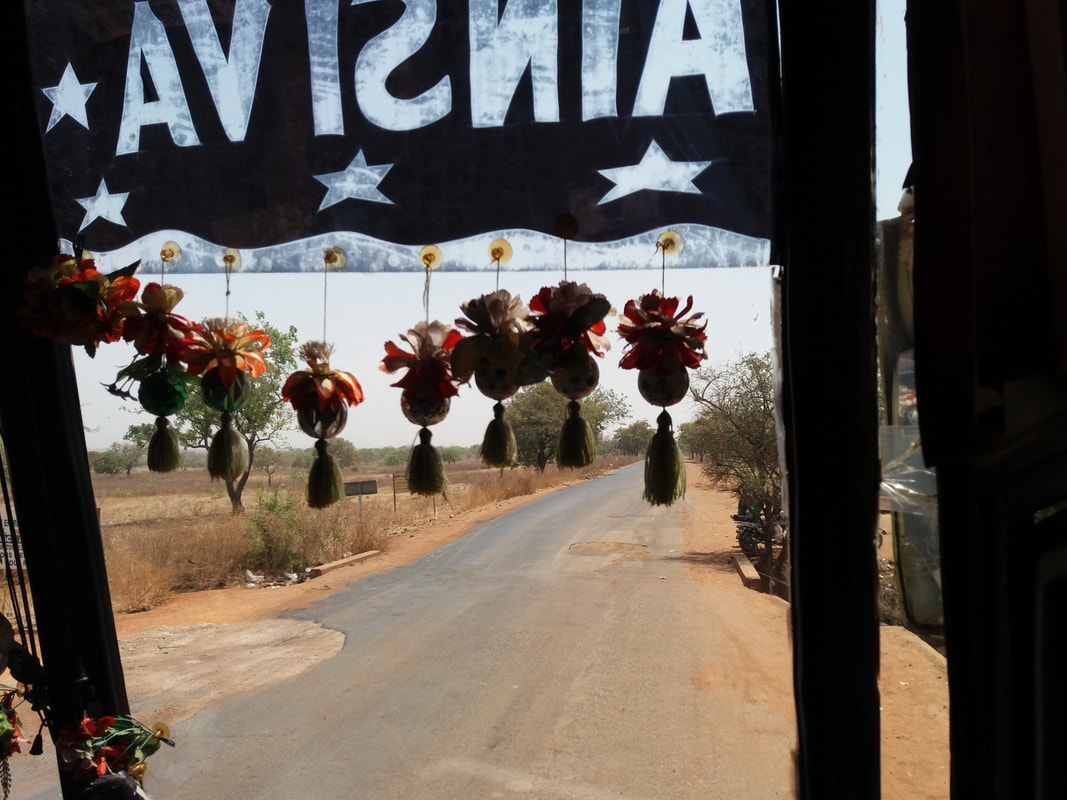 ​The road was blacktop all the way but with many potholes. Going was slow. Inside the bus it must have been 55 deg. And then the inevitable happened. We stopped. The front fairing was too low. We didn't get enough clearance. The pot holes just getting too big. They were topping up the water. Fiddling with this and that.
I myself was running low on water. I didn't need 5 hrs stuck at the road side. 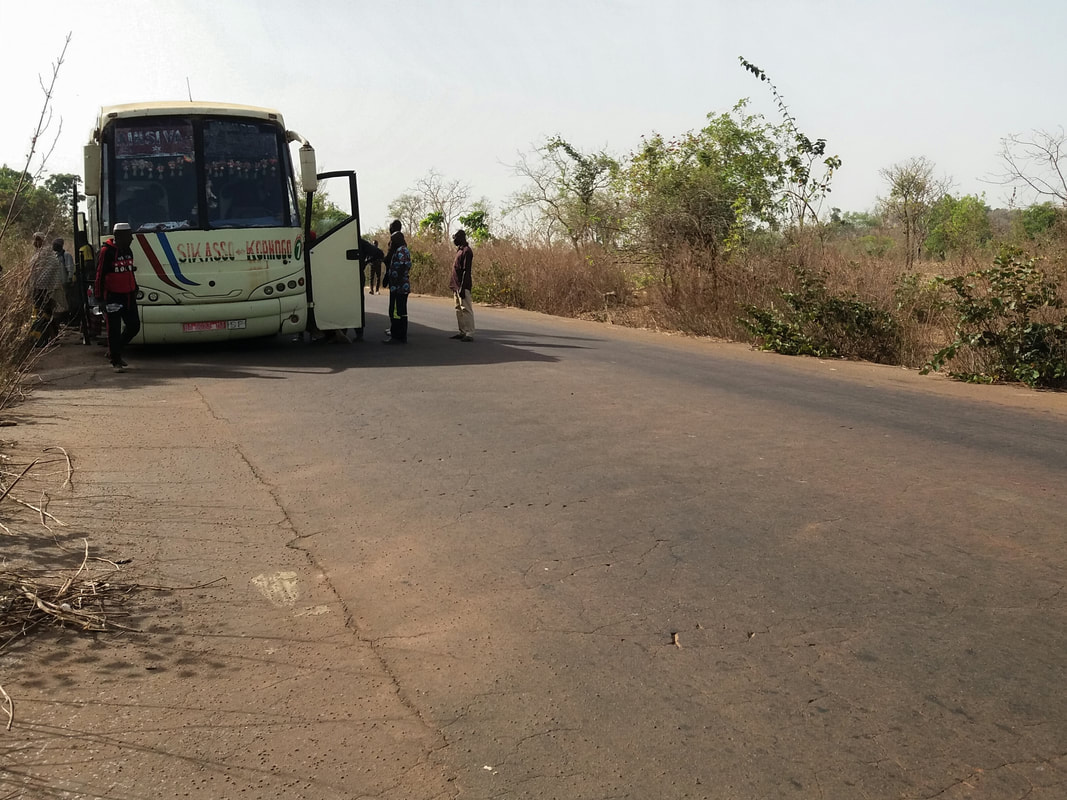 ​A mini van came past. Those that run the shorter routes. A guy jumped ship. I followed suite. I spoke to the guy. He agreed. "The bus was very bad". At least it's not only me.

We were just over half way at 2pm. It had been a long hot day.

The mini van weaved in and out of the holes and had plenty more clearance and the windows were fully open. We made up time. We picked up a few more people. They said hi, the driver's mate asked if I was going on to Abidjan. I said I needed to get a hotel. He said he'd take me to one. 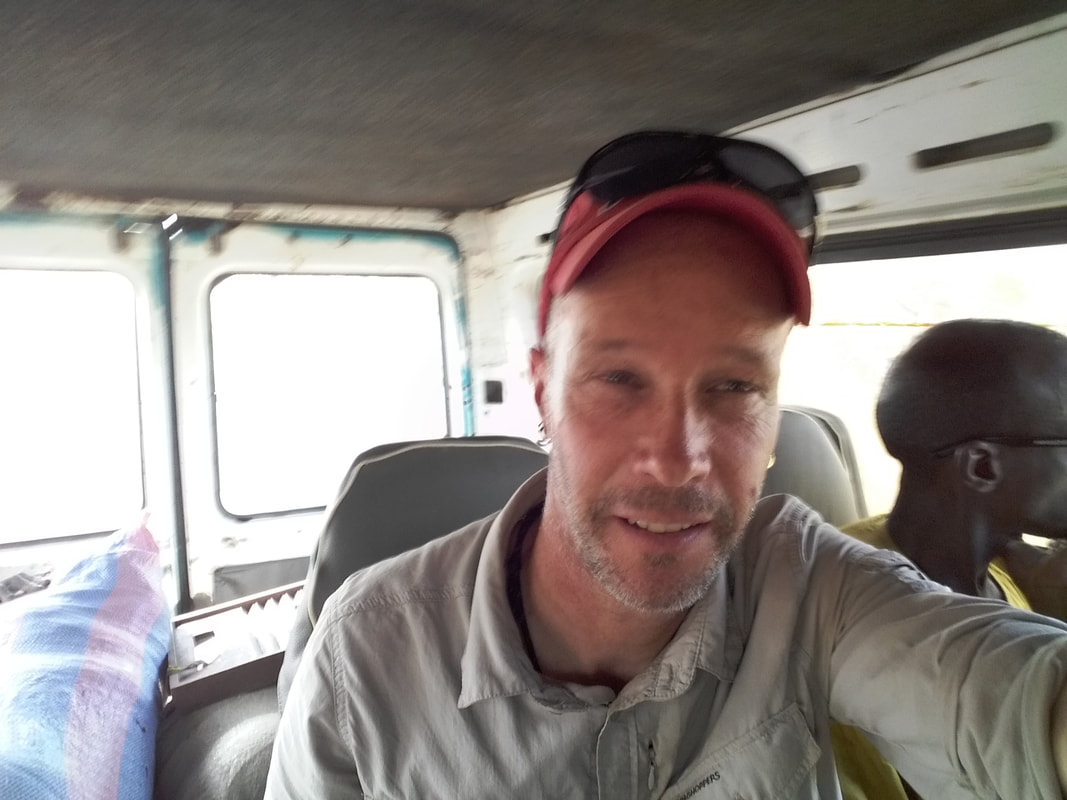 From Ouangolodougou, the road junction to Burkina Faso, the ride was fast. Cote d'Ivoire whizzed by.

​Super smooth highway. They dropped off everyone. And then made a detour dropping off the last guy when the drivers mate got a taxi to take me the last bit to HOTEL LA GRACE.
​
I was curious about the price but I was also too fucked to care.

Bit of a walk from town but they have an attached resto and bar. I get a spicy fish soup with rice and 2 beers.

I reckon I deserve 2 nights here.
​