The West Coast trip is only for hardened travellers. It's uncomfortable and expensive, not to mention frantic.

​But if you want adventure, West Africa is the place to come.

Sierra Leone, widely known for the civil war in the early 1990s, where rebels liked to ask you, "long sleeves or short sleeves?" This was a sick way of asking you where you preferred them to chop off your limbs, at the wrist or above the elbow. 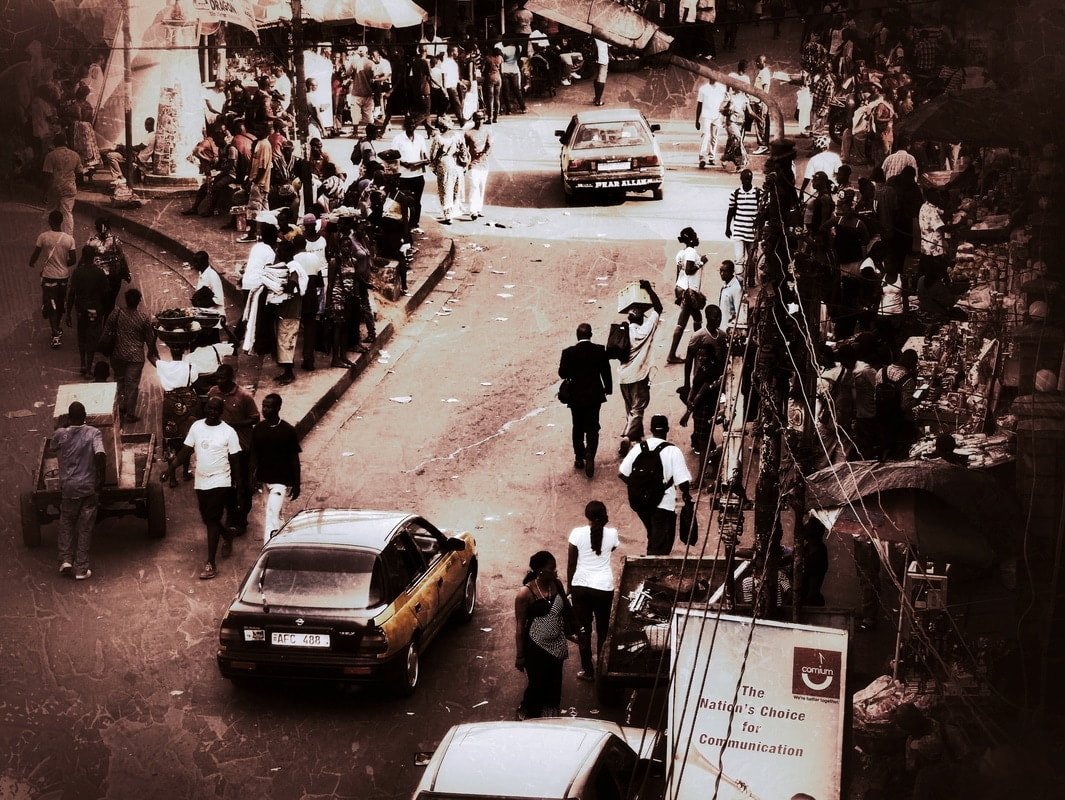 This post has been re written for Nomadic Backpacker and is based on my travels in West Africa in 2012/2013.
The first morning in Freetown, down at the ex-pat cafe on Wilberforce Street, a British army guy there on the ongoing peacekeeping mission, bought me my coffee and warned me:

﻿"Don't go walking around at night. In fact, at sunset, go to the store, get some beer, return to the hotel and sit on the balcony. It's not safe."﻿

Later that day, back in the same cafe I met some Peace Corps volunteers who invited me to join them to the beach.

I broke the golden rule and stayed out too long.

I took a moto-taxi back to town. But the area where I was staying had a curfew. My driver said he'd take me but I'd have to keep an eye out for the police.

The Cotton Tree, a small round-a-bout with a big ass tree in the middle, was a far as he was prepared to go.

There were no street lights in Freetown back then. It was very dark and in my nervousness, I could not remember if I had to take the 4th or 5th street off of Siake Stevens Street. I choose the 5th cos the distance felt right (It was actually the 6th).

A group of young men, almost invisible in the darkness, called out to me:

Holy fuck! Sweat ran down my back. I reached the hotel, ran up the stairs and banged on the door.

What I should have done was to act the Alpha male and go over and made friends with them.

I started to settle into Sierra Leone but a scuffle on the pavement one afternoon shook me.

I stopped to look. Someone was getting a beating. A guy sees me.

"Mother fucker thief, we're gonna kill him﻿", he calls out.

A big guy in a white shirt and tie enters the scrum, grabs the victim and pulls him to safety. Blood pours from his head and Mr White Shirt with Tie bashes him about his bloodied head again and tells him to get off home before they come for him again.

Afternoon break for the girls who clean the hotel. I sit with them to pass the time. Their English is good but sometimes they switch to Creole. They sit on my lap, arms around my shoulders and whisper sweet nothings in my ear, kiss my cheek and runoff.

After a few days, a friend of the hotel girls turns up. She's was a hooker. They'd told her a tourist was in town and she came to see if she could service my needs. She invited herself into my room, stripped down to her bra and knickers and asked for 50Euros.

​We got take out and ate together in my room, then she scrubbed my back and gave me a hand job in the shower and then we watched TV. An African way to spend the evening. She was happy with me treating her dinner and the cab fare home, without the need for her to open her legs.

Another afternoon, keen to get some photos of the colonial-style buildings, I had my camera out, taking a selfie with nothing behind me but the old post office, but some guys assuming I am pointing my camera at them run over and start shouting at me.

I explain that I am not pointing the camera at them. I show the angrier of the guys, the photos. His friend defends me.

"Just go. Be careful with that camera. We don't like our photos being taken"

I travelled to Bo. I wanted to visit a diamond mine. The guy at the hotel calls his friend and am picked up within 30mins and I jump on the back of the motorbike. We stop at a police checkpoint. I'm quizzed. What was my motive? How many times have I been there before? and where was my permit?.

Merde. I did not even have my passport; only a copy. The driver risks losing his fee so he argues for me. He told me he had brought tourists here before and no permit was needed.

Was it my drivers' job to deal with a possible bribe? I was told I needed to return to town and get the paperwork done. Period.

I'm kinda relieved; that I wouldn't have to go thru with the trip. My driver, disappointed.
​
***

In Kenema I roomed at the cheapest hotel in my guidebook. It was linked to a bar with loud music.

It was hot and humid. Sleep wouldn't come. No fan, no breeze coming through the window. A 2 am I go down to join the melée. I ordered a beer. It was warm. No one pays me any attention. I down the beer in one and return to my room. With my head fuddled by the beer, I lay in my sweat, naked under my mozzie net. A couple next door find each other, room rented by the hour. By 4 am it's finally quiet.

I walk the streets looking for a cold drink but there is no power during the day so the beer is always warm. Generators aren't switched on until 6 pm, just in time for the football on TV but the fridges take all night to cool the beer, by which time it's the day time again and off go the generators.

***
​
I wanted to get a photo of the mosque. I asked permission. Was given the OK but another guy saw me and started ranting off at me.

In Freetown, I had secured the visa for Liberia in just 1 day and was keen to keep moving. I got to Malema and then Gonghu, the border crossing to Liberia.

"Where is your entry stamp?"

Thumbing through the pages, I say confidently, "here".

"This is an exit stamp. Where is the entry stamp?"

I showed him the exit stamp from Guinea, pointing out that the date corresponded with the date of my Sierra Leone 'exit' stamp.

He studied my passport and then with relief said, " I'll just cross out the exit stamp, give you an entry stamp and sign it". "OK!"

I crossed into Liberia and booked a flight to Paris. My West Coast dream, over. It was too much. There is a limit to how much one can take. I wasn't ready. I like to think that now I would handle many of the situations a little differently.
​