Travelling from Dakar to Bamako by road

February 20, 2020 | Tagged: Africa
​Join the ride as I travel the 1377km across Senegal and into Mali. Dakar to Bamako via Tambacounda, Kidira and Diema. 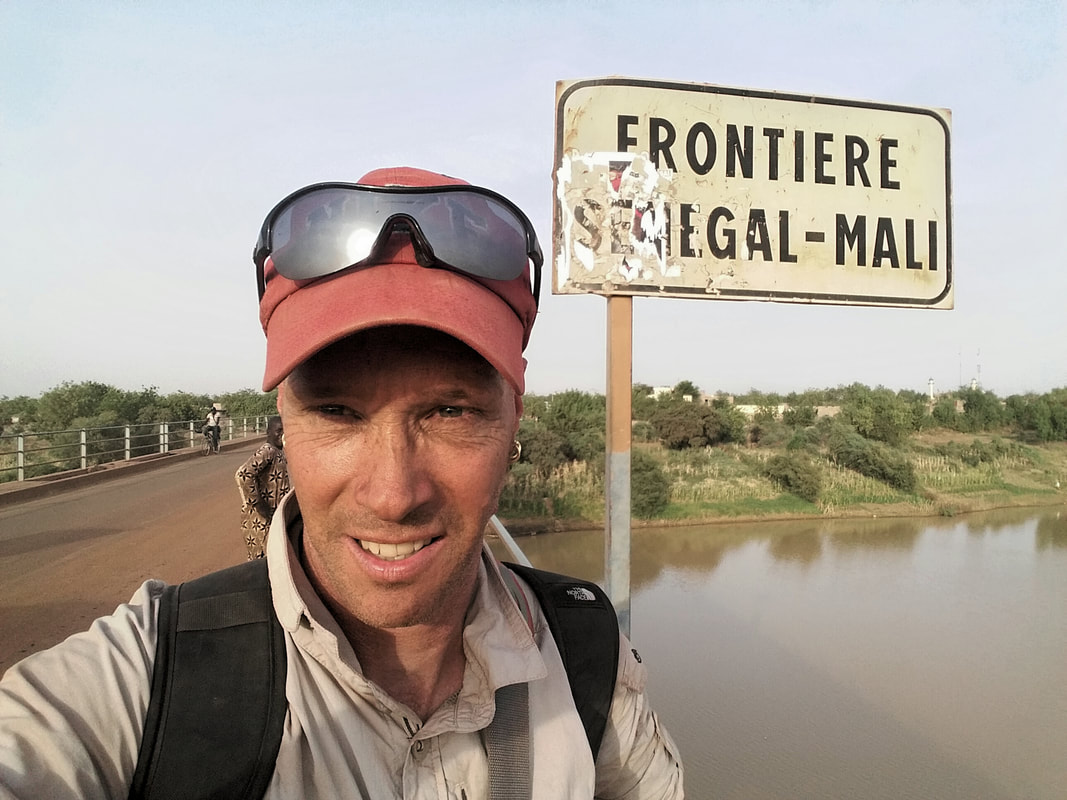 This post is a complete bitch/complain about the horrors of travel in Senegal. West African travel is hard core and roads in Senegal, Guinea Bissau and Guinea (and dealing with their non existing systems), rank the worst.

​Travel can be so easy. You get the Chinese in to re build the roads that have not been improved since the French built them and develop a thing called timetables. Oh that would be too easy.
​
All the logistics from Dakar to Bamako, Senegal to Mali, as of February 2020.

The epic (or is it classic), train ride from Dakar to Bamako is a thing of past. The service was withdrawn on the Senegal side long ago. The Mali section from Kayes to Bamako seems also not to function. The passenger service was replaced by a freight service only but I asked a few questions and seems like that has stopped too. I crossed the tracks a few times. They are in a shit state.

The mini bus transport system within Dakar is pretty good but you need local knowledge to understand it.

With the help of a local website and my own experience, the bus #61, #47 or #35 would take me back to the Stadium Leopold and then I could take a #44 to Pikine and walk the rest.

The #61 broke down after 9km of the 10km journey. I shouldered my bag and walked. I jumped on the #44 and the guy shook his head when I said "Pikine". I got off, jumped on a #84, which clearly said "Pikine" on it. The conductor girl shook her head. WTF. I got off.

A guy asked where I am going. "Timbouctou". He then replied in English, that he could take me to Mopti.

I needed his help. The French accent here is very difficult for me to grasp.

I told him that it was uneblage, about Timbouctou. I needed to get to the bus station. "Take a taxi".  My least favourite phrase.

Some guy found me, flashing his id card at me. I could take a 'sept-place'. A shared taxi where you wait indefinitely for 6 others, or a bus. The bus appealed. It was going at 11am. A ticket seller took my cash and gave me a ticket for Tamba. 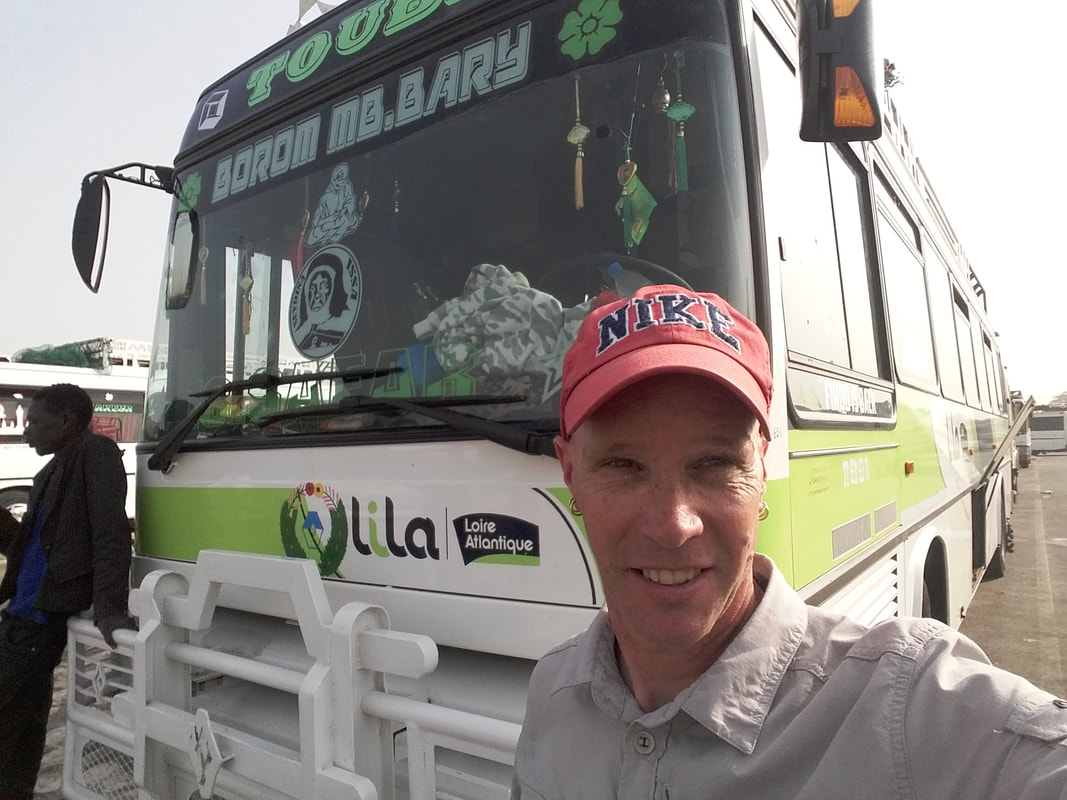 All smiles before I learnt that 11am meant 6pm.

I got pissed at the ticket seller. I took my bag and walked off. The other passengers were looking at me. 'C'est pas vrai ici. Uncroyable!'

I found a sept-place with only 1 more passenger to wait for once I'd secured my seat.

Traffic was appalling but after a fashion we reached Mbour, then Kaolack and finally at 9.30pm and after 484km we reached Tambacounda.
​
After a 20 minute walk I found the small auberge: Auberge La Maison Blanche 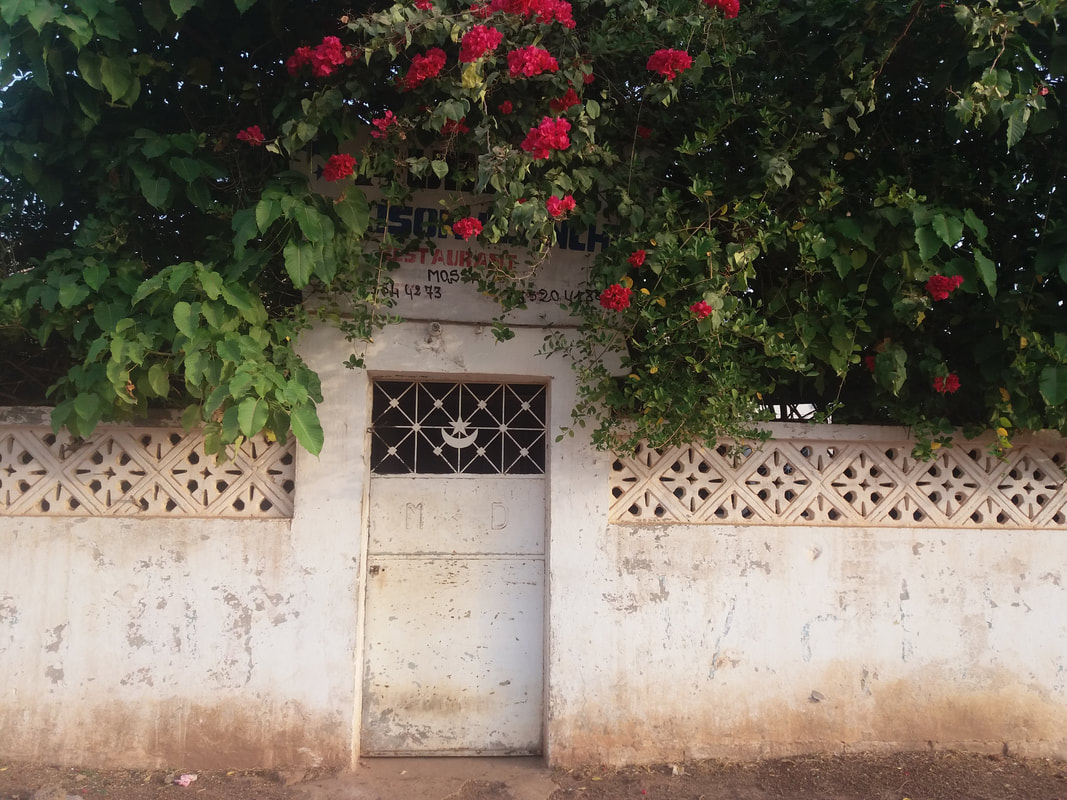 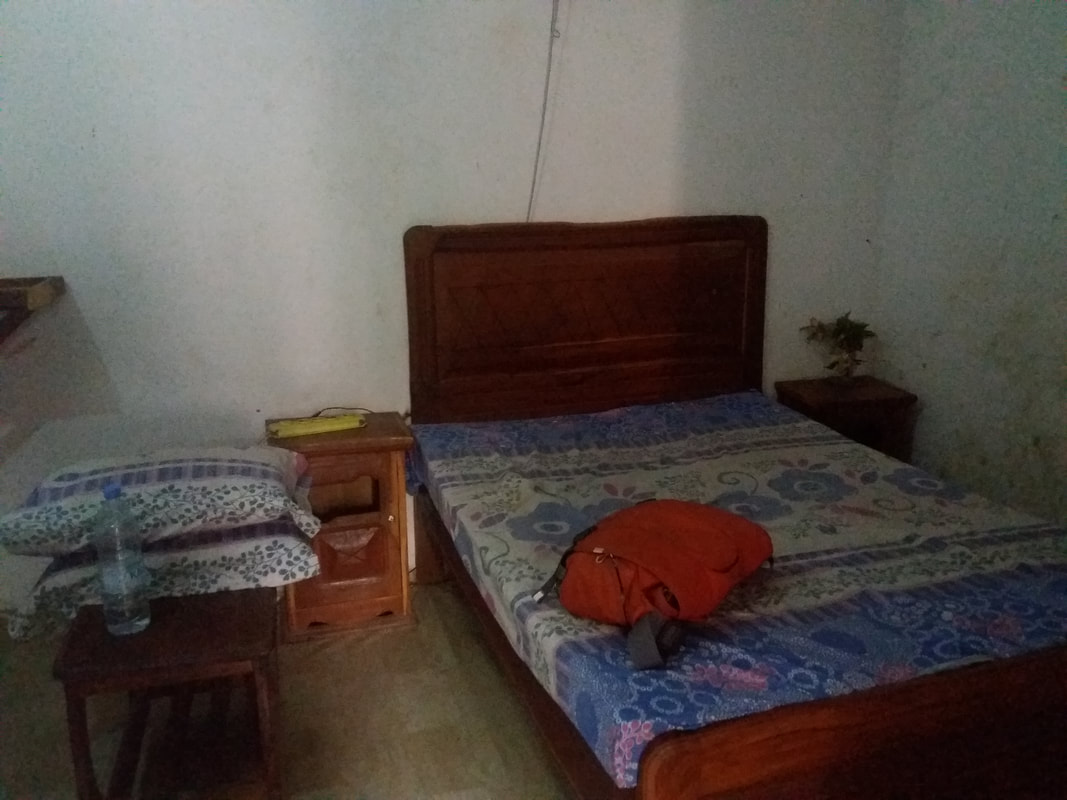 ​For 10,000 XOF you get a stifling, semi derelict room with an awful bathroom. But at least there were no bugs in the bed and the sheet smelled of soap powder. I strung up my mozzie net, filled my water bottle and added some iodine, washed off the sweat and dust, rinsed my shirt and laid down in my stupor.

After an hour, I got up. My shirt was already dry. I opened the door to let in some air and tried to sleep some more. I heard the mosque at 5am and then someone knocking on my door, followed by "as-salam alaikum".

Where do people get the idea that it is ok to knock on hotel room doors looking for their mates at 5am.?

Heading out to another bus station, I stopped for a baguette and coffee. The lady running the stall, was from Sierra Leone. She was so happy to meet an Englishman. 'We are like brothers', referring to the colonisation by the British. As was I. I could speak and be spoken to without the need to say I didn't understand.
​
I met a guy from Conakry. He too was pleased to see an Englishman. The Senegalese don't seem to give a shit.
​
Transport to Kidira was with a mini van, needing 19 people before it would leave but it filled quite quickly 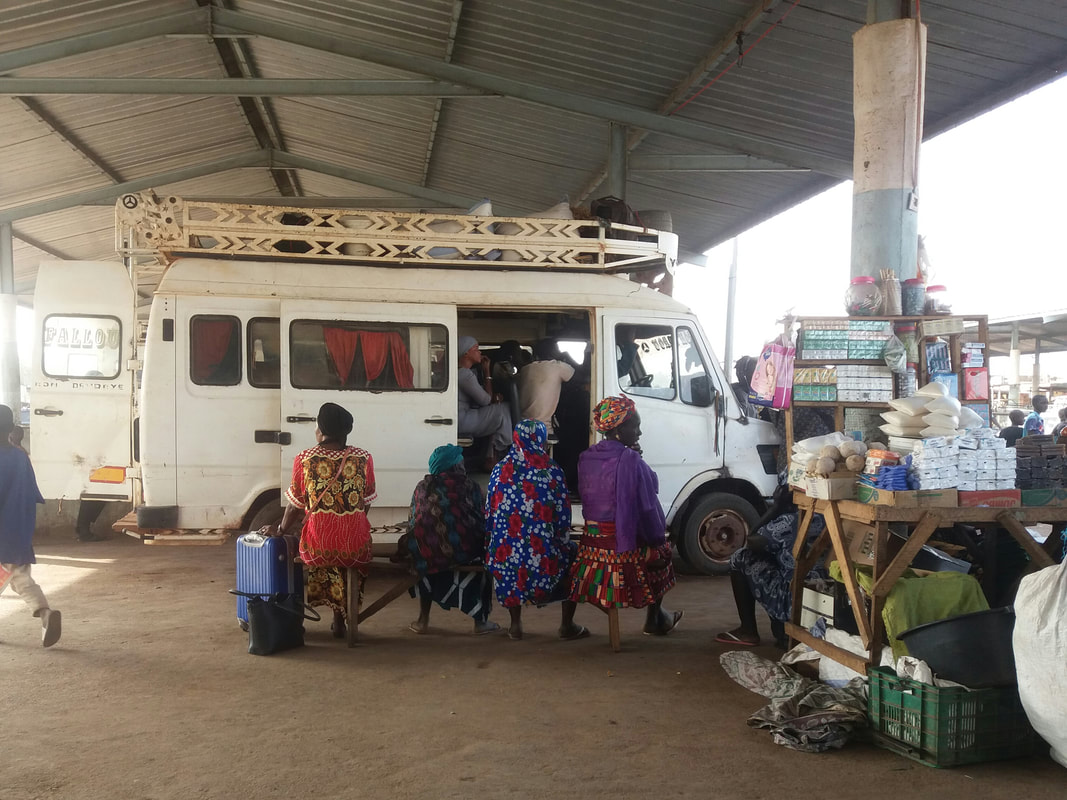 ​The road was crap but the guy was at least on a mission but his haste resulted in his fucking up the suspension. So after about a 3rd of the way we stopped. 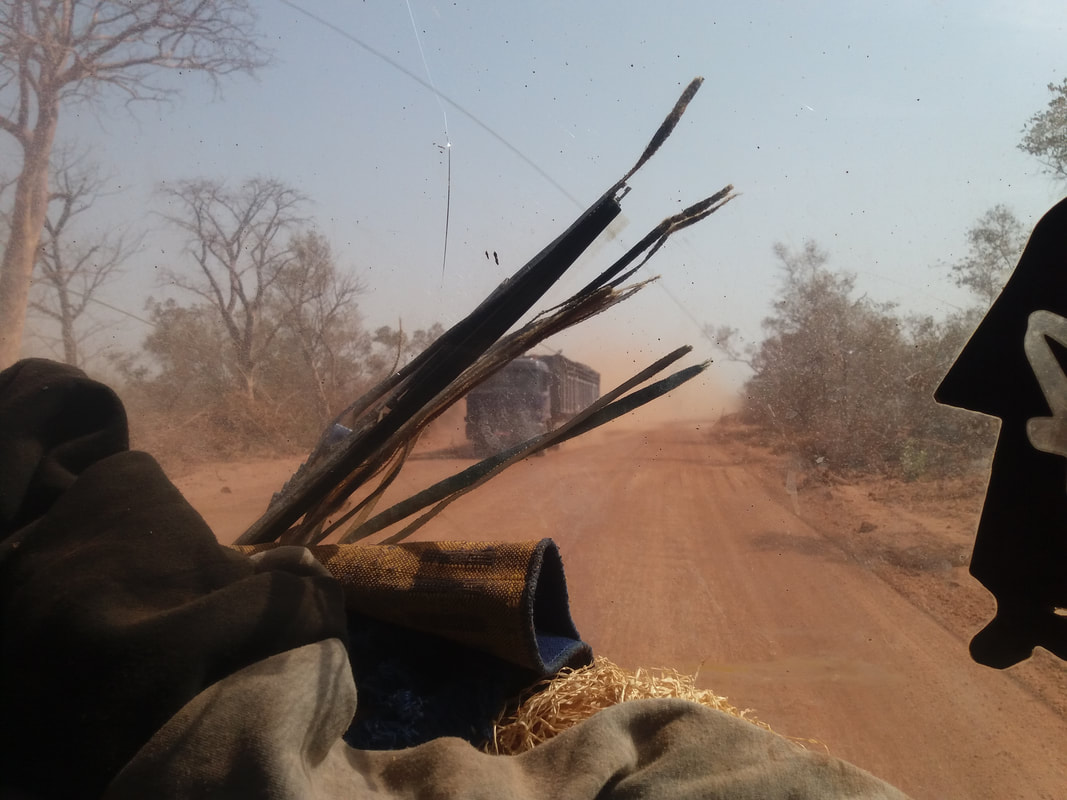 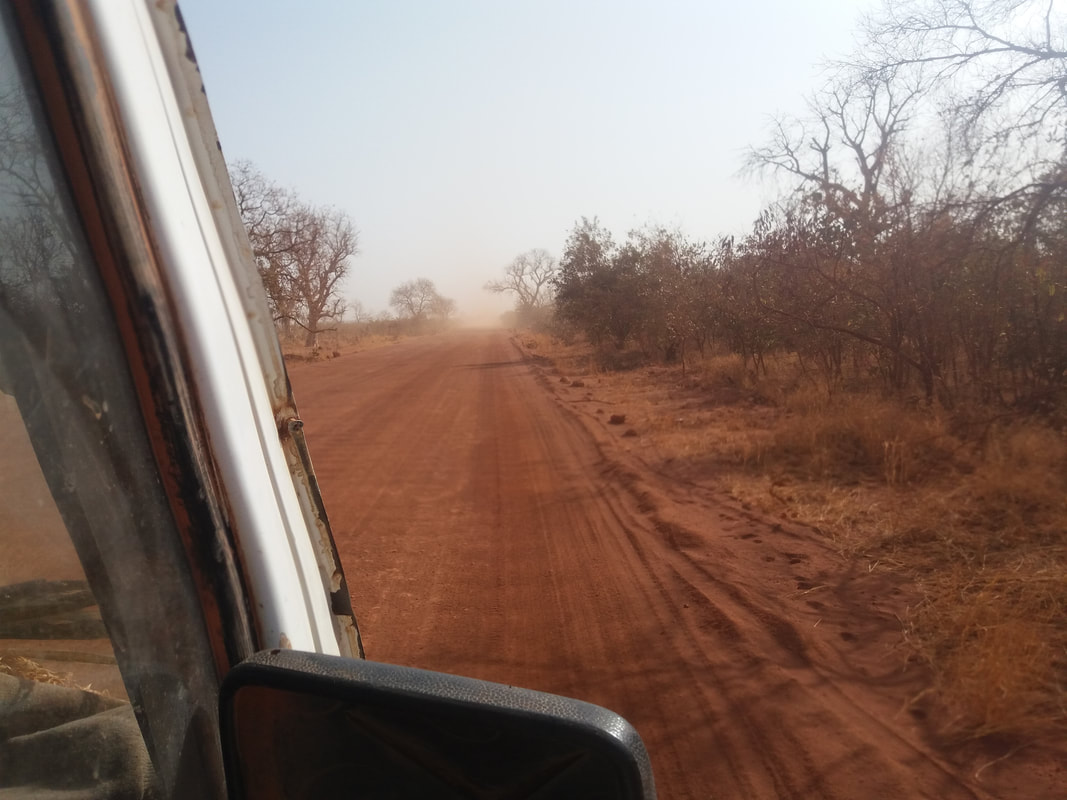 We would change mini vans and the others weren't pleased that we we're asked to pay again. At least I wasn't the only one pissed off. A fight broke out between our earlier driver and the new one. Quite a few punches and kicks later, we were ready. But not before I was asked to pay for the free seats so that we could leave and a lady selling water getting pissed with me as I wouldn't give her my ear rings.

The new driver went slower and the road deteriorated even more. At around 4pm we reached Kidira, the border town with Mali. I was let out at the road for the border. Moped drivers saying, "c'est loin". A Gambia guy helped me out saying it wasn't very far at all.

It was just 300 m to the check point. I got stamped out and walked across the bridge to Mali: 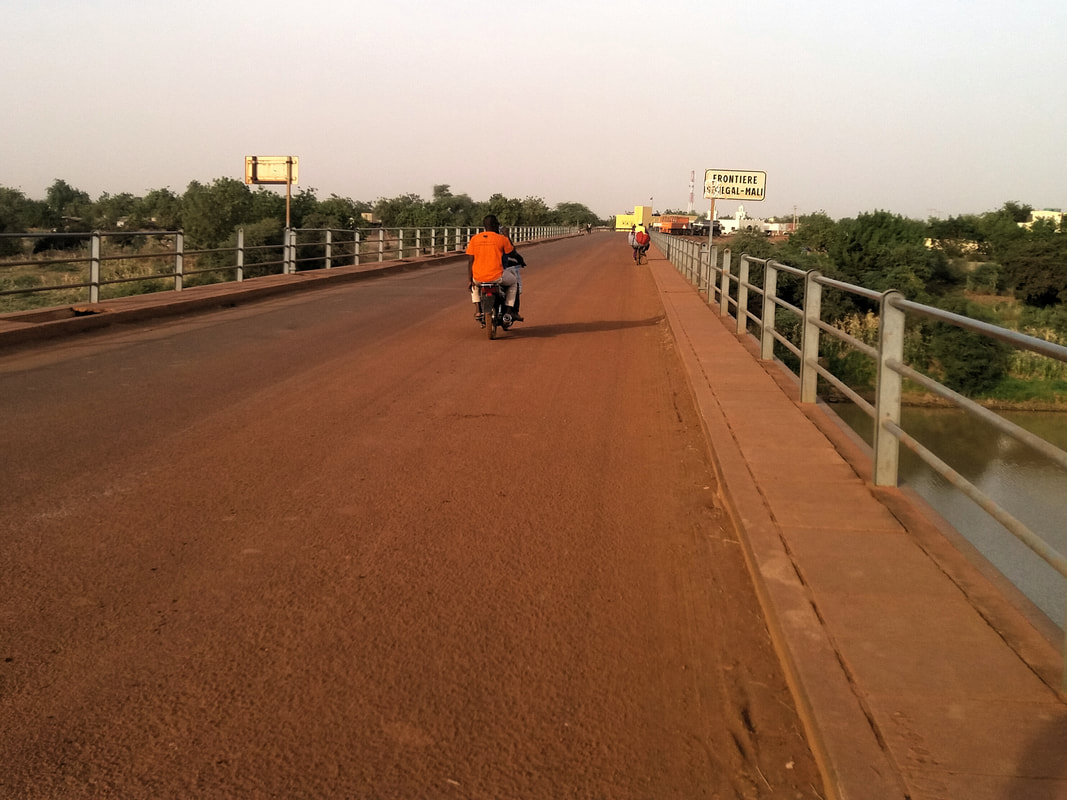 ​Welcome to Mali, country 94 on my never ending journey. 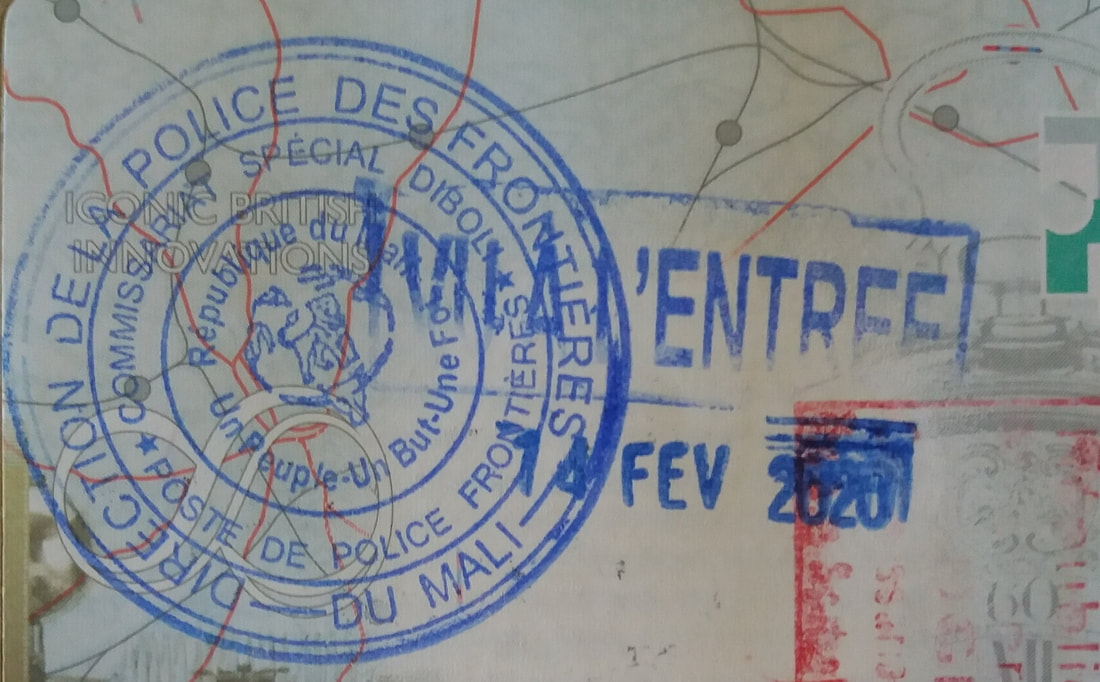 There were no buses to Bamako until 6am or so they said. The towns only hotel, across the road from the immigration post had an attached night club. From past west African experience I knew I had to avoid that.

I took a shared taxi to Kayes. But not before I was asked to pay for the 2 remaining seats so we could leave. I pretend I didn't understand.

At 9pm, after 7 police check points where the guy with the 10 rice sacks full of stinking dried fish on the roof rack was asked to pay a bribe we arrived in Kayes.

The gps showed my location and I headed to a hotel shown on Google maps. But at the said location there was nothing. 3 times I was directed up various side streets before remembering that Africans like to be 'help-ful' rather than saying they didn't actually know.

I took the standard pre bed routine. Wash shirt and body, string up the mozzie net, purify water. The room was hotter than the one in Tamba. I don't know if I slept or not.

I was 'thinking', all night. "What the hell am I doing. Why can't I be happy with normal life. I am to old for this shit"

For 2 days my daily intake was just a morning coffee and a baguette and just water, oranges and peanuts as snacks. No dinner. I was dehydrated but what to do when bus drivers won't make comfort breaks?

Back on the main road, where bus agencies had their little bus depots, I found a SONEF bus going to Bamako. 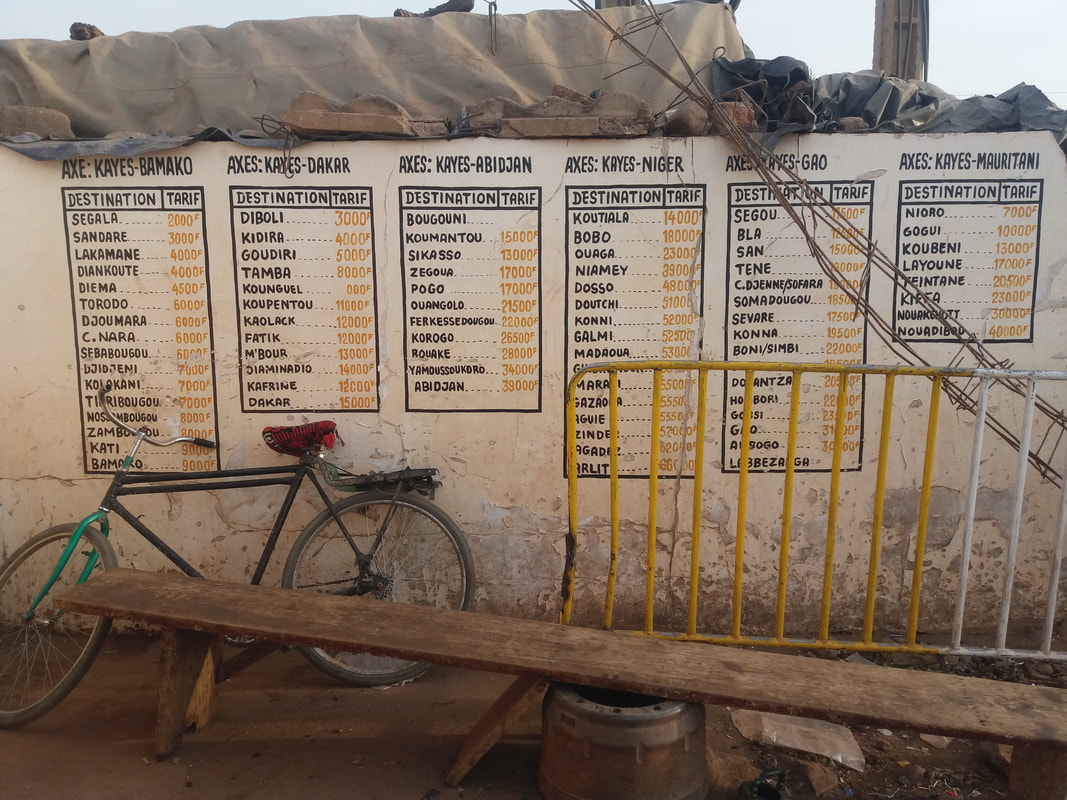 I found a place for a baguette and then a cola and water. The bus was due to leave at 10am but was nearer 11 before we left. And that was just after I put my fingers down my throat to get rid of what I thought was a 'nice breakfast'. I squeezed some gaviscon down my neck and threw up again.
​
Smooth roads for most of the 625km with only 1 lunch stop at Diema where it turned out that some millitants had attacked an army post, just 6 days before. I had gotten off of the bus to be given the look. 'what do you want here'. I gave him the "1000 yard stare", as if I didn't give shit. 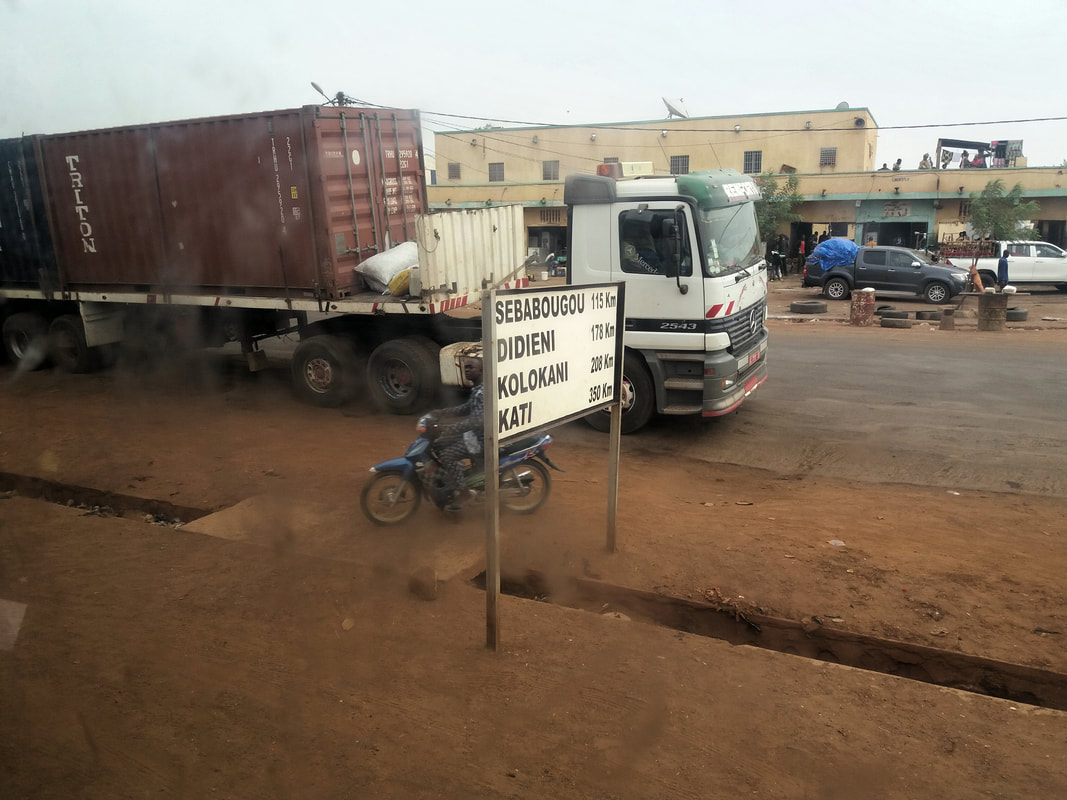 I managed to hold down rice and sauce-tomat: 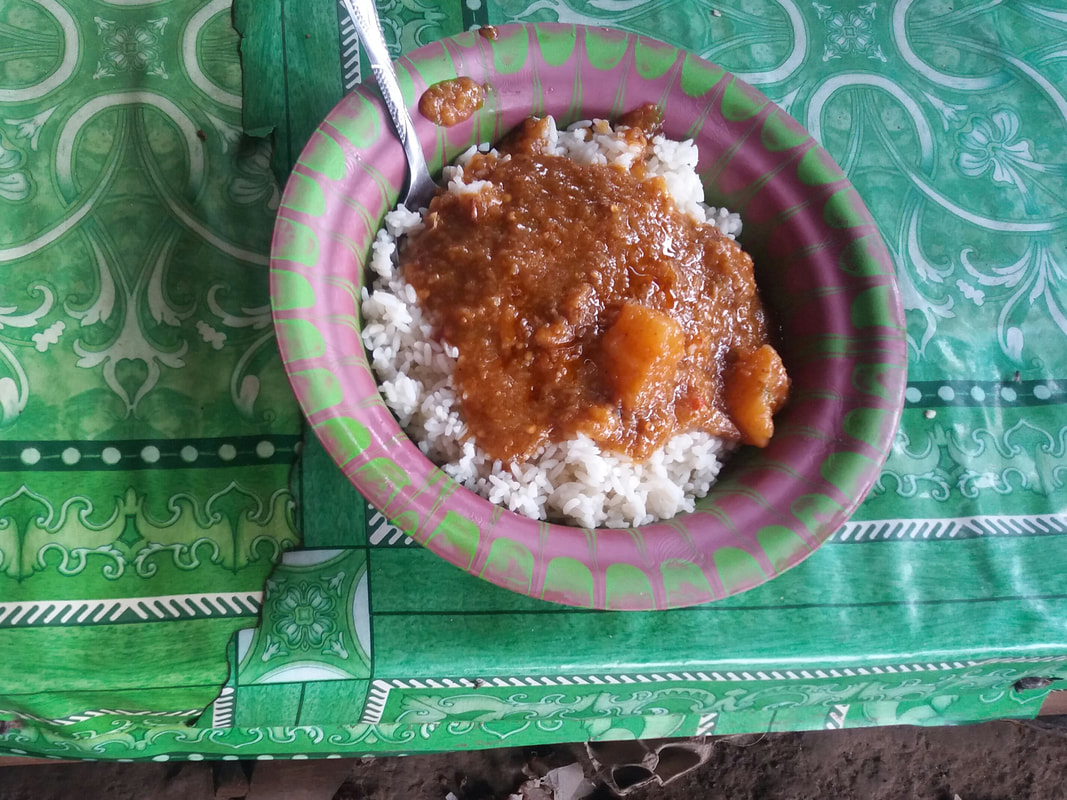 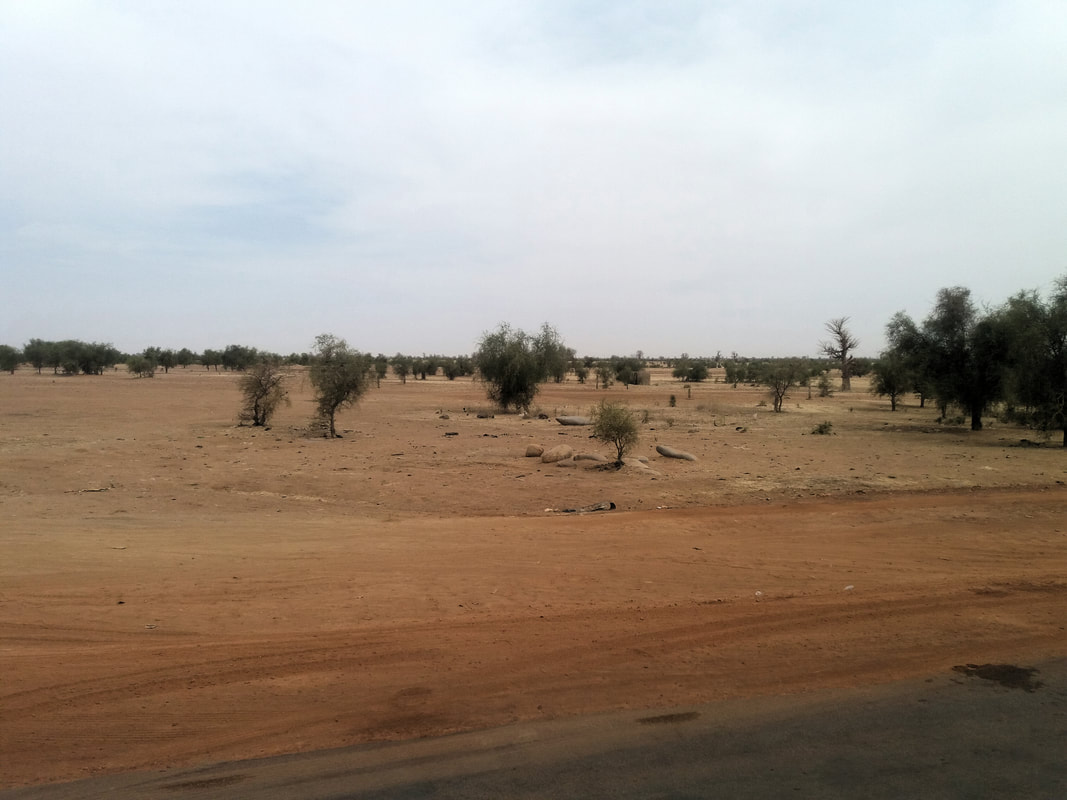 I try my best to avoid arriving in the dark but for the 3rd day on the trot it couldn't be helped. I had to take a ride to the Sleeping Camel. The 6 rooms full with NGOs and aid workers. No room for a solo overlander. I asked for a mattress and 'camped' for a fraction of what a room would cost. 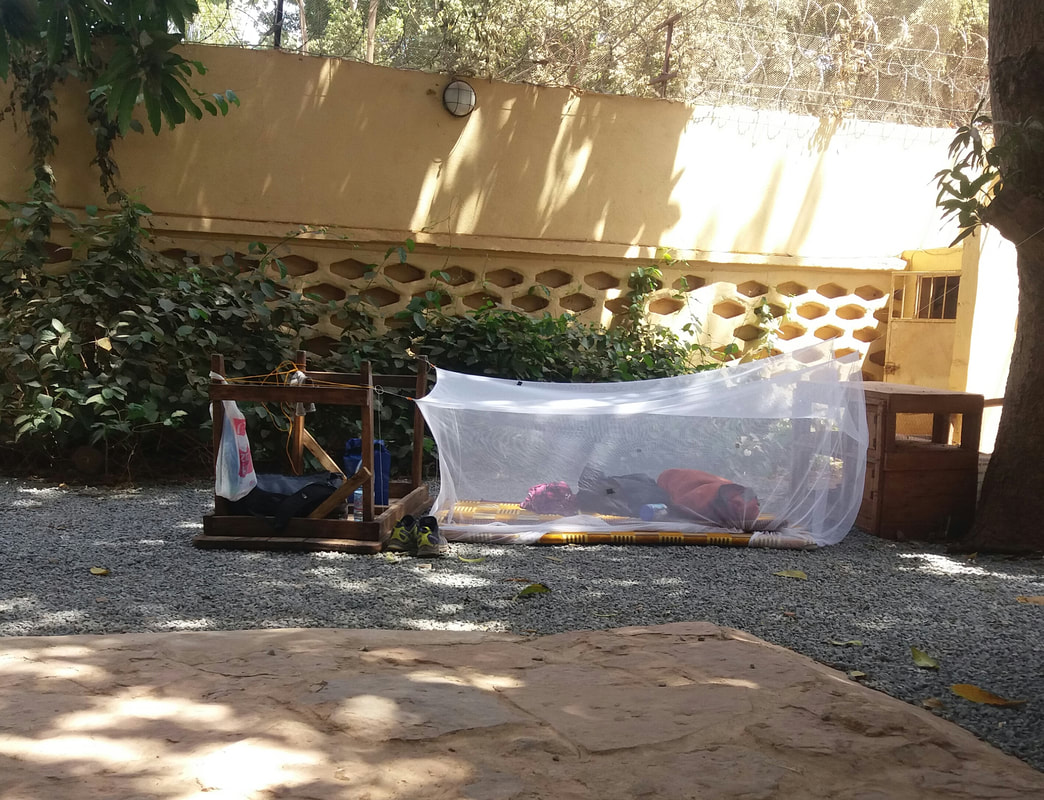 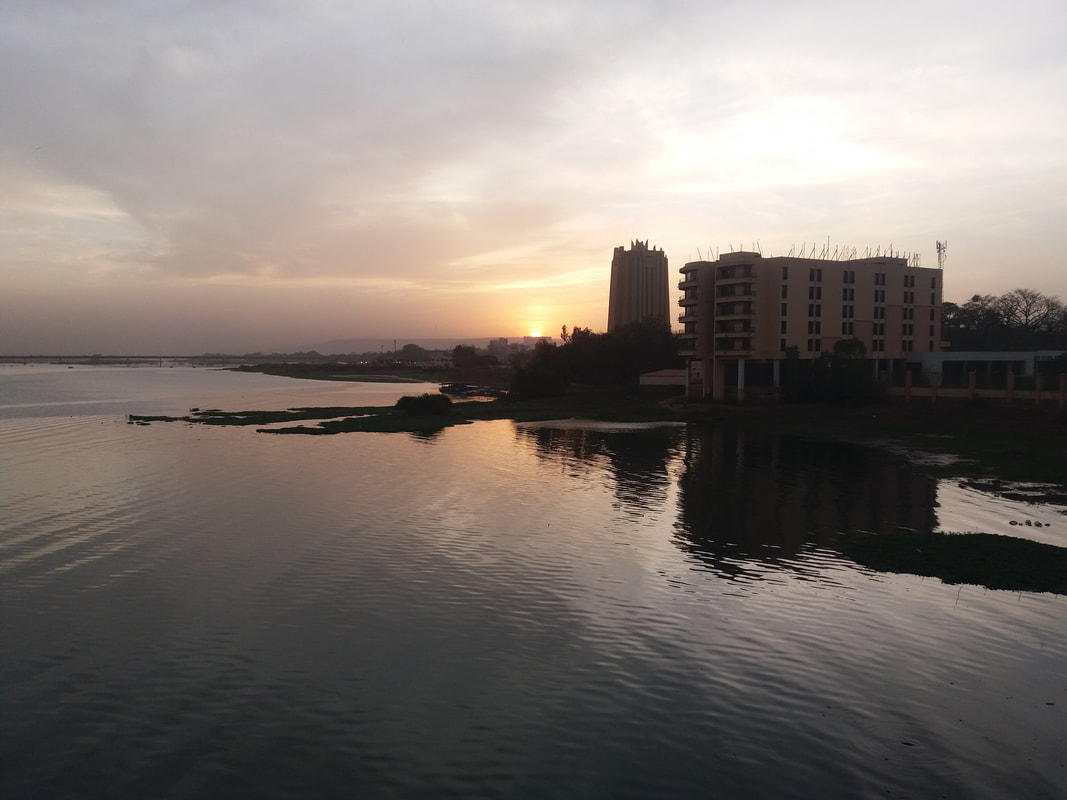 Sunset on the Niger river in Bamako, Mali.
​