August 27 2021 | Tagged: Border Crossings
Border Crossing: China to Pakistan from Kashgar to Sost, on the Karakoram Highway, over the Khunjerab Pass, the highest-paved international border crossing in the world. 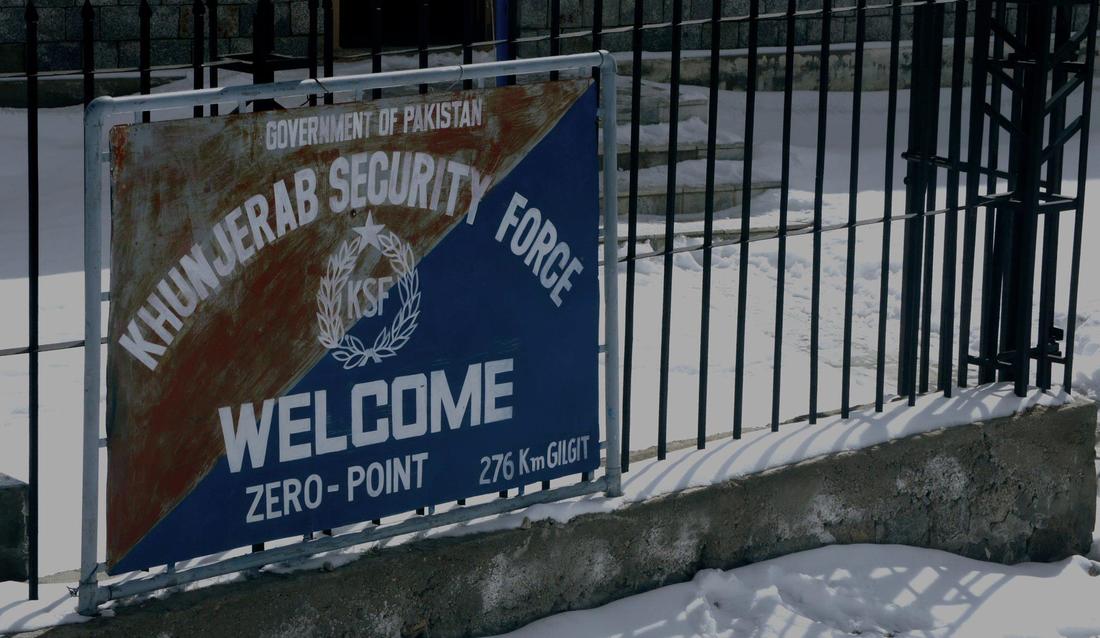 Pakistan! Never thought in a million years that I'd get to travel in Pakistan but in 2011 I did, from Kashgar (China) to Sost (Pakistan) on the Karakoram Highway over the Khunjerab Pass, the highest-paved international border crossing in the world.
This post has been rewritten for Nomadic Backpacker and is based on my travels in 2011 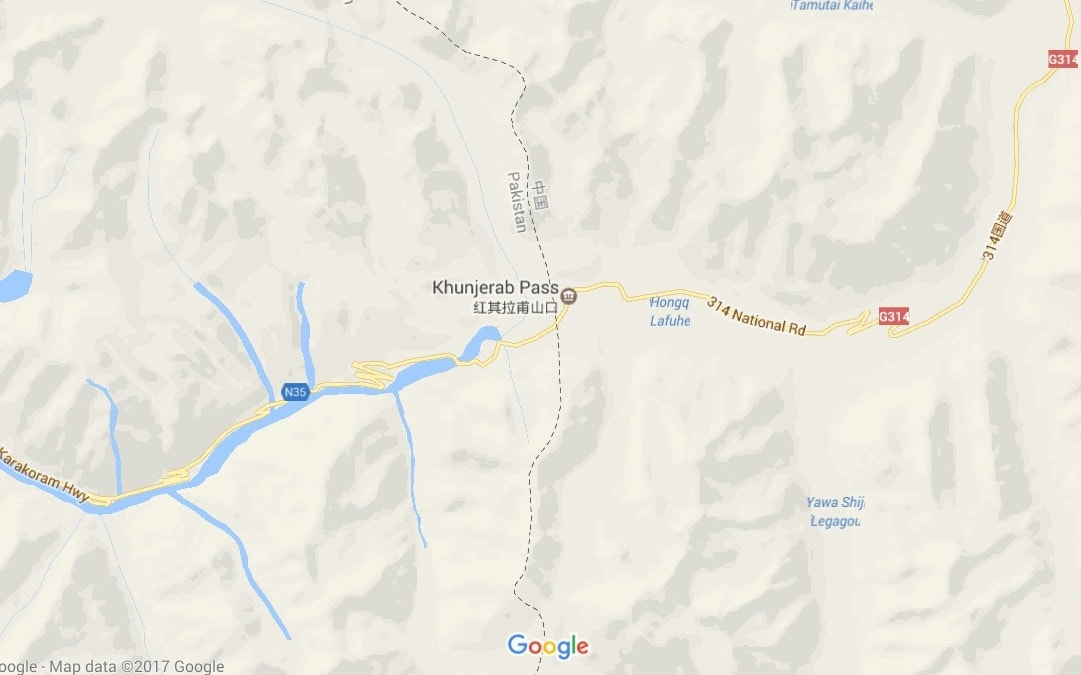 I arrived in Kashgar after a 27 hour train ride from Urumchi, sorted out a bed at the YHA and headed off to the International Bus Station.

I knew that the bus to Pakistan went weekly and that the word was out that you could get a visa upon arrival at the small out-post of Sost.

It was a 2-day trip. You took the bus to Tashkurgan where you spent the night and the following morning you did the formalities of checking out of China, then boarded the same bus and travelled on the Karakoram Highway, over the 4693m Khunjerab Pass and down into Pakistan.

I was told that the bus went the very next day. Shit! No time to fully explore Kashgar.

I returned at 2 pm to buy my ticket and the ticket girl said that the visa was indeed available in Sost.

​I'd never been so excited in my life. Pakistan! was I really going? 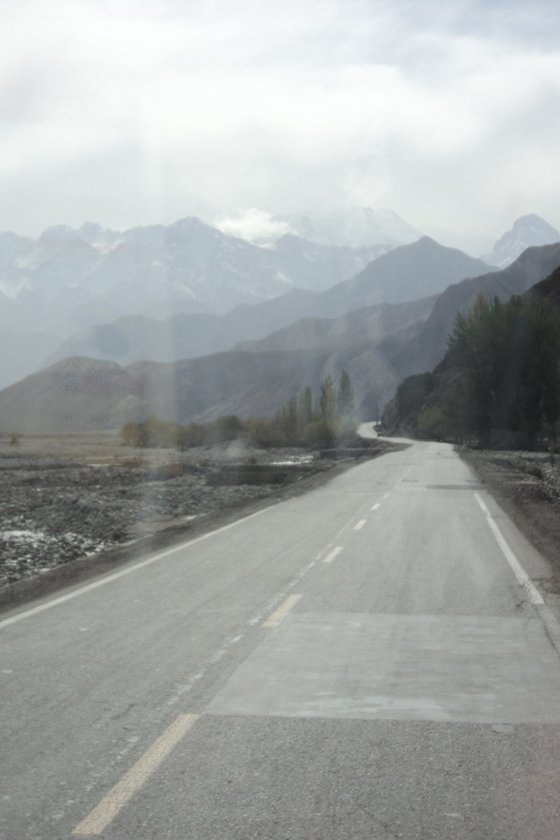 At 9 am I was at the bus station. For company, I had 7 from Thailand. A sweet group of people from Bangkok and Hat Yai. We talked about what we knew about the VOA. We talked 'travel' as we are wont to do. 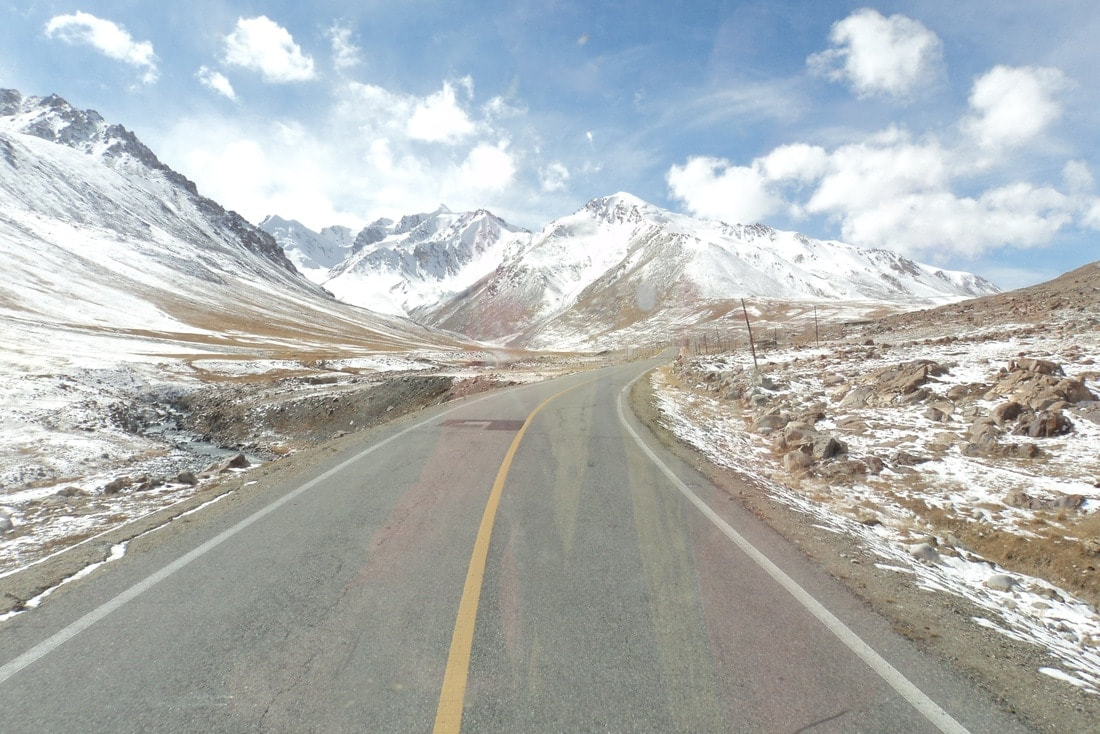 Tashkurgan, last stop in China at 3094m. I shared a room with a young Pakistan chap who was on the bus, at a hotel he knew.

As darkness descended, a cold wind blew thru the town. I met up with the Thai group and shared dinner with them. A storm picked up. Rain hammered at the windows. An icy draught blew under the door and then it was suddenly quiet again. I took a peep outside. Snow was softly falling. I walked back to the hotel.

Early the next morning me and my roommate headed off to the immigration office. He knew the ropes. He'd done this trip countless times.

Our bus was already parked up. The driver rearranging bags. Another bus next to ours and 12 other travellers. What the hell!

Turns out they had all arrived separately and been held up, waiting for the border to reopen.

Chinese National Holiday. Everything shut down for a week or more. A week in Tashkurgan doesn't bear thinking about. What would you do if your visa expired in that time? None of them were in that situation thankfully for them.

After the border formalities, we climbed back on the bus and set off. Awesome scenery. Barren landscape, snow-capped mountains far off in the distance. The road climbed but the grade was gentle. I stood up front taking pictures until a Chinese soldier boarded for the last kilometres to the top of the pass and told me to sit down. 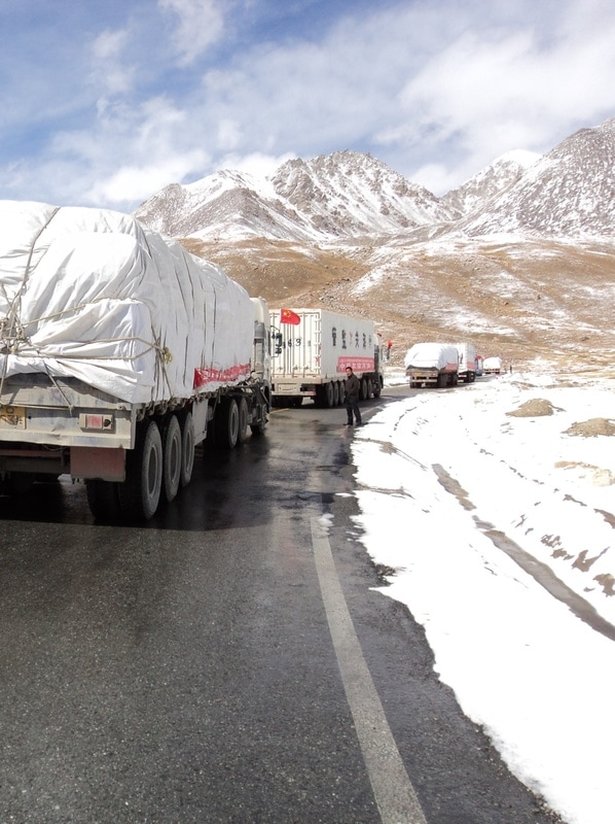 Back on the bus. The Chinese soldier got out at the barrier. We were over the top before we knew it. I was expecting some sort of headache at such a height. I snatched a photo as we passed over the top. 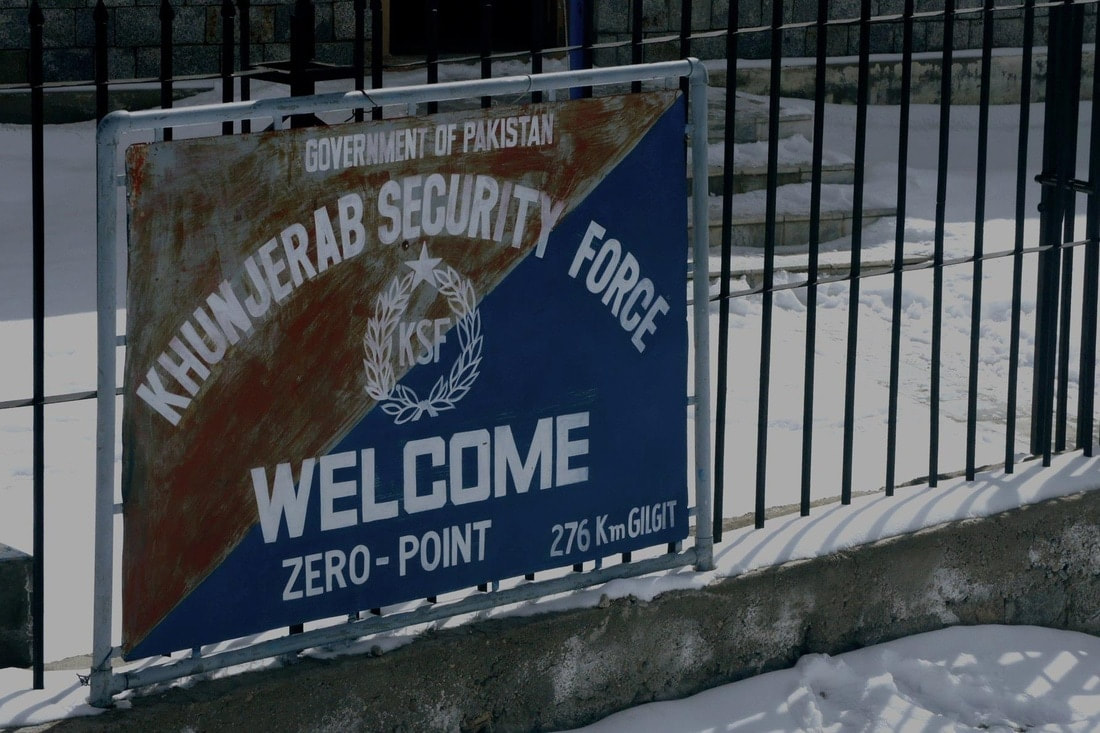 I've been taking photos of road signs for as long as I can remember. Above and below, two with the most wow factor! The photo below is obvious, taken through the mud-splattered windscreen of the bus. 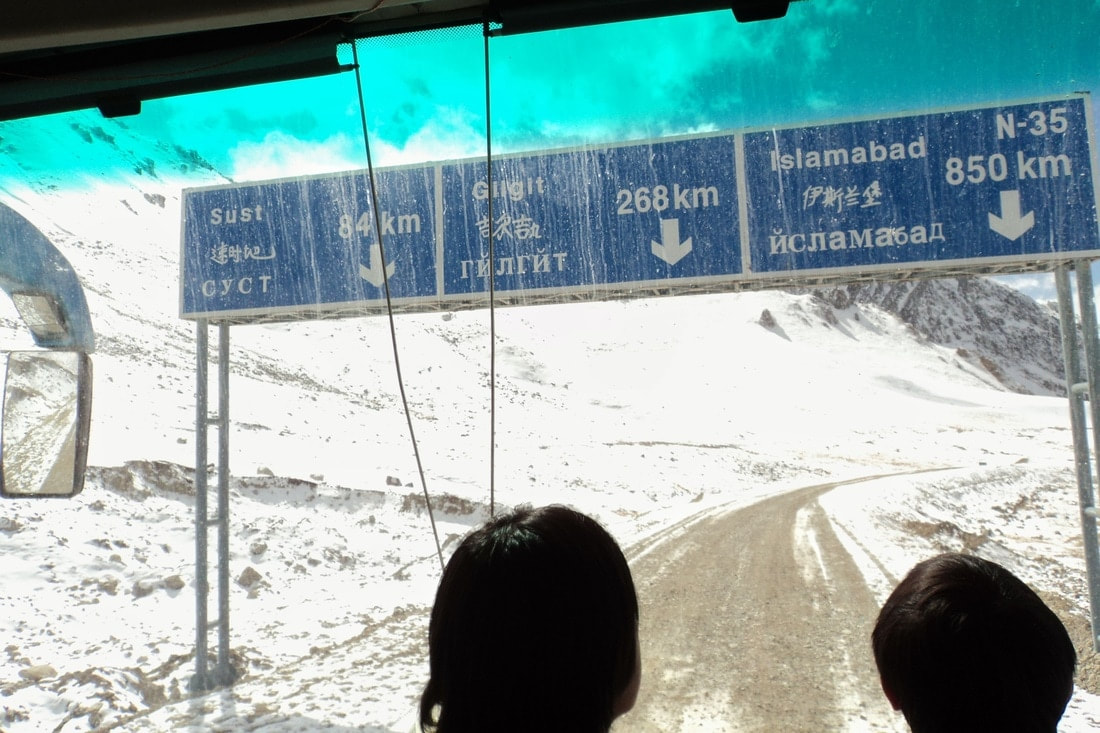 The Karakoram Highway runs 1300km from Kashgar to Hasan Abdal topping out at the Khunjerab Pass at 4693m.
Then down and down and down. The road and river squeeze through the narrow valley for mile after mile. Tight hairpin bends as we continue to drop. Rocks and stones brought down by the rains, litter the road, single track at best.

Road gangs work non-stop to clear the debris. It's hard to tame this part of the world. Nature has the upper hand. And I am glad, otherwise, there would be busloads of tourists with name tags and matching hats following someone holding a 'follow me' flag. 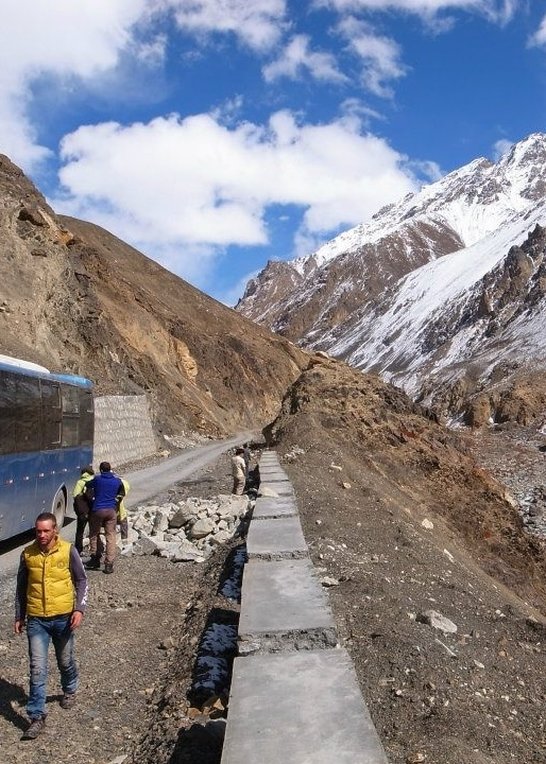 After some time we arrived at the first Pakistan checkpoint. Autumn had arrived, the trees, their colours beautiful.

Officers of the KSF happy to pose with us before finally continuing to Sost and there began a bit of a mind game over the VOA. Had it been too good to be true?

To cut a long long story short, the VOA had been or rather was in the process of being cancelled. A fax had been prepared but not yet sent, to their Chinese counterparts in Tashkurgan who would alert the authorities in Kashgar about the decision to cancel the VOA and not to sell bus tickets to those without the appropriate visa, due to the failure of the FAX machine.

Of the other 12 western travellers, one had contacts in Islamabad and I was happy to let him and an Irish guy who was very well-spoken, his father being a diplomat somewhere, who just oozed confidence, deal with it. The 7 Thais were being met by a local guide and of course, they received their VOAs without any ado.

Ours would become available on presentation of a crisp 50$ note. Of course, this alerted us to a dodgy business deal.

We had logistics on our side. None of us had re-entry visas for China. We could not go back. They would have to let us in.

Visa and passport less we went off to find a hotel. The problem would be resolved in the morning.

The Dutch guy got a call and told us to report to the immigration at 9. We ambled in after lush breakfasts of dahl, chapatti and chai at almost 11. The VOA had indeed been cancelled. This much was true.

Their reason as to why was that travellers were applying and getting visas extension in Gilgit. The VOA was, as is mostly the case, non-extendable. So instead of telling Gilgit immigration not to extend VOAs, they just decided to abandon the whole idea.

​We paid our visa fees, made a promise not to extend our visas (though 4 did w/o problems) and were officially allowed to wander in Pakistan. 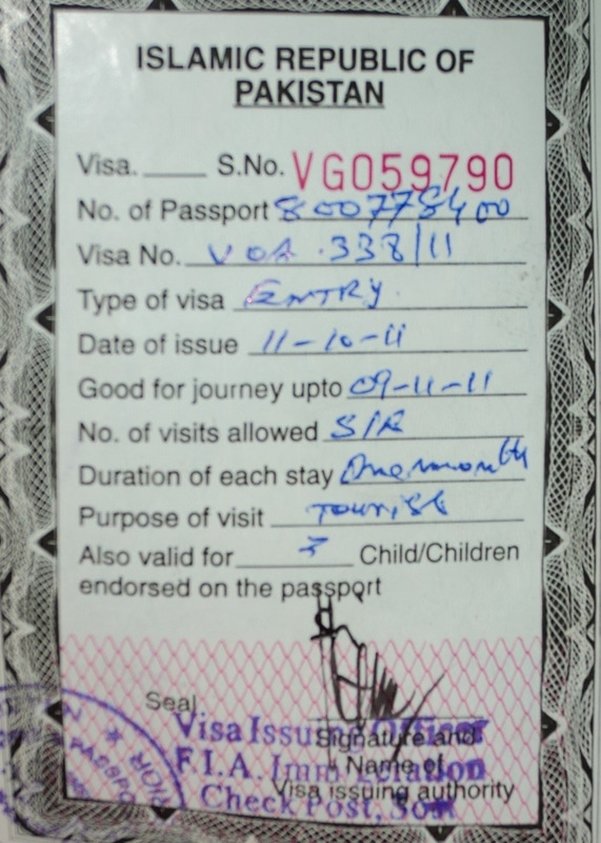 Two weeks later I get an email from an Aussie girl I met in Karimabad who crossed into China reporting from Kashgar that the YHA was full with tourists all caught out by the new ruling. I had done it by some stroke of luck. I was just thinking that I needed to cross the pass before the snows arrived.
​
​