November 28, 2022 | Tagged: Travel Advice
My 6 best travel hacks for long-term, low-budget traveller backpackers can be summed up by the phrase 'Always Look For The Best Deal'. Making what money we do have, go a little further or 'how to get more for your buck'. 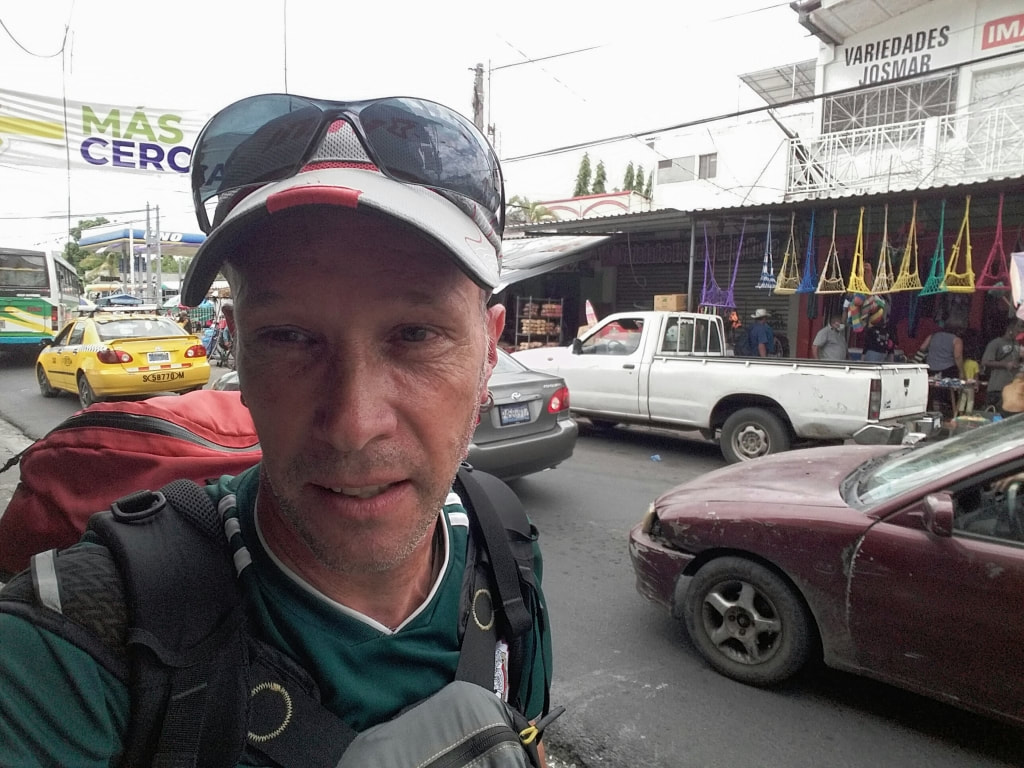 In another lifetime, my dad used to do private work for David Tomlinson, you know, the actor who played the father, Mr Banks in the film Mary Poppins, starred in Bedknobs and Broomsticks and the Herbie films amongst many others.

His advice and he was as rich AF, for my father who worked all hours God sent to keep the house, mom and 2 (at that time) kids, was "look after the pennies and the pounds will look after themselves".

​This advice is just simply as apt as you can get.

This blog is primarily for people with more time than money but of course, everyone can learn a thing or two.

You have to weigh up the pros and cons. What things work out to be #FalseEconomy or #Foolish.

Of course after a lifetime on the road, I could list around 100 travel hacks to save you time, money, headaches and a whole load more besides but here are my 6 best ones which can be used with little to no inconvenience to yourself. 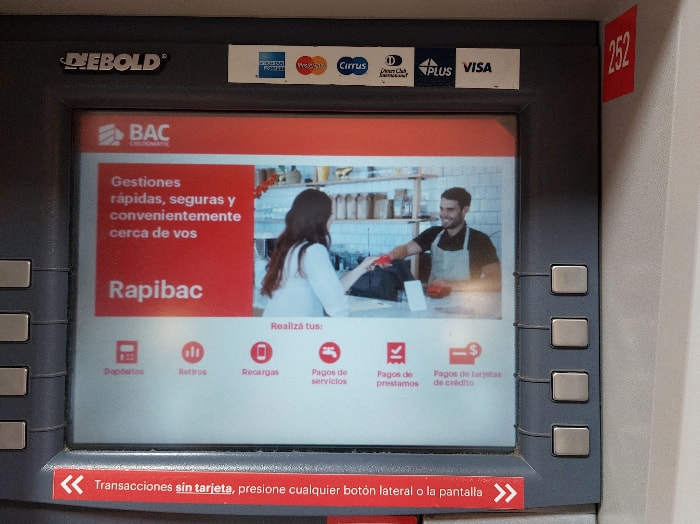 Not all banks are created equal:

Why use the BBVA bank here in Mexico City to withdraw cash which charges 174 Pesos when you can use the Banorte bank which only charges 42 Pesos?

And why use Banorte when Citibanamex only charge 30.74 Pesos or when the BanCoppel has the lowest ATM withdrawal fees in Mexico

There is a rumour that withdrawal fees at the Caja Popular Mexicana are still only 17 Pesos but it is 17km away and actually across the border in Estado de Mexico, not in the DF anyways.

You would save yourself 12 Pesos in withdrawal fees but from Roma Norte you need to take Line 3 on the Metro, Line 6 on the MetroBus and another combi-van.

The ATMs listed above, that's BBVA, Banorte, Citibanamex and BanCoppel are all within 4 or 5 blocks of each other. As I said, these hacks can be summed up by the phrase, Always Look For The Best Deal. 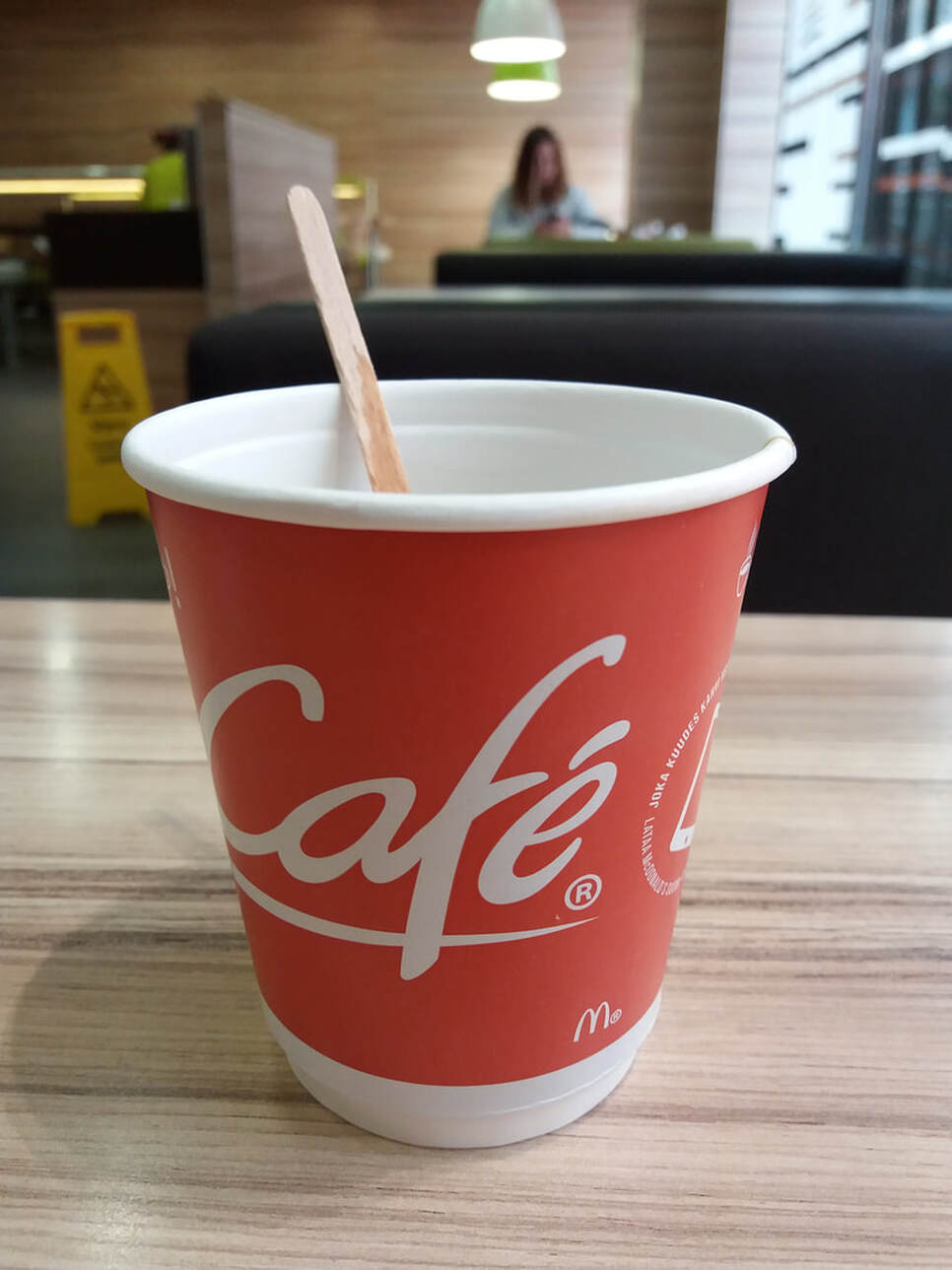 The cheapest coffee on offer at Starbucks is 55 Pesos. That's almost 3 USD. And I don't know about you but 1 coffee does not hit the spot. 6 USD on coffee? I had a private room in Nicaragua for that.

An almost-decent coffee at one of the many cafes here will set you back 35 to 50 Pesos and that's for a very small cup. At least the smallest coffee on offer at Starbucks is the size of a bucket, so in that respect, a coffee at Starbucks is better value.

Enter the only US-branded business I am happy to give my custom to. McDonald's. Yes, the coffee here is almost the best value for money in Mexico. An 8oz Americano coffee, that's a decent size, bigger than what you get at one of these hipster cafes in Roma Norte, will set you back just 20 Pesos. That's 1 USD. And drinking 2 here is still less than drinking 1 at Starbucks.

In Mcdonald's, other than good coffee, you get semi-comfortable seats, free WiFi, and cleanish bathrooms. They don't care if you sit in there for hours at a time nursing a single coffee.

​It is my Go-To coffee anywhere in the world. I have been to 105 countries, and more than 1000 cities and if the town or city has a McDonalds I have been in there for a coffee. Only in Helsinki and Schipol Airport was I disappointed.

The Starbucks In Roma Norte is 8 minutes away in one direction. Mcdonald's is 15 in the other direction which is only 2 minutes from the aforementioned BanCoppel. The Mcdonald's is next to the Cuauhtemoc metro station so at no point are you going out of your way.

And even if Mcdonald's is my favourite place here, it is not the cheapest on offer. You can get pretty decent take-out coffees at the OXXO store. A 10oz black Americano is just 19 Pesos but you don't get anywhere to sit. An extra 1 Peso for that privilege is well worth it.

And at the 7-11 store you can also get an 18-Peso 10oz coffee. Some stores even have a small seating area, so this is probably the best deal. But the chairs are the deal breaker and of course, there are no bathrooms.

And as with Starbucks and Mcdonald's, you are never far from the OXXO or 7-11 stores in Mexico City.

If you need a coffee and are in a rush (are Long-Term Travellers ever in a rush?) or it's late at night or pissing down with rain, you can find a mobile coffee stall with bread on almost every corner and these can be had for less than 10 Pesos.

Of course, the obvious solution is to invest in a kettle and make your own or even just give up coffee, but c'mon, where is the fun in that? 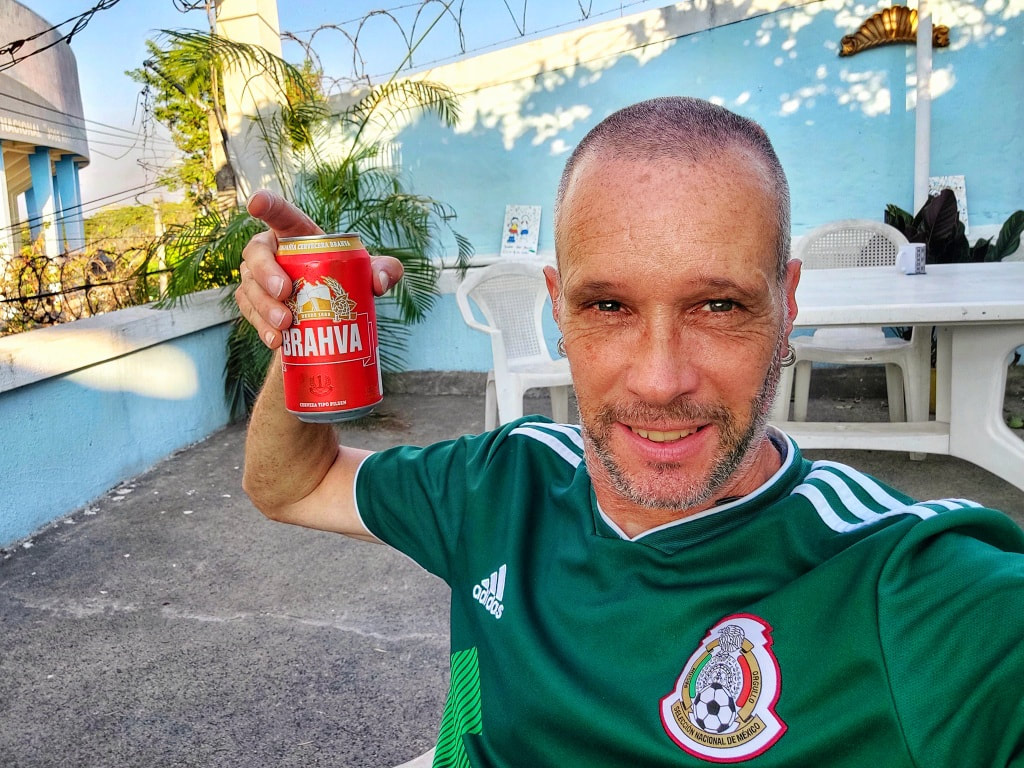 If a beer or 3 is something that you can't or simply don't want to live without, you can still make your hard-earned cash go a little further.

A bar, pub, call it what you will, is your worst enemy. The markup on alcohol is incredible. The local supermarket and the hostel roof-top and balcony are your new best friends.

A single 33ml bottle of Corona will set you back, 40 Pesos in a cheap bar. If you are with friends, get a bucket of 6 and save yourself a few Pesos.

I regularly buy a 6 pkt of Carta Blanca 330ml at the local Bodega Aurrera for 60 +/- Pesos. That's just 10 Pesos a can. 30 Pesos saved right there when compared to the cheapest find in a locale. Assuming 1 beer is not enough, you can save a minimum of 2 dollars each time, say 3 times a week, 6 USD a week, 312 USD a year. Go figure.

If you prefer the stronger stuff, the country you should head to is Russia. In Russia, vodka is cheaper than water.

Have you ever considered why vodka is so cheap? It stops the alcoholics from drinking anti-freeze. 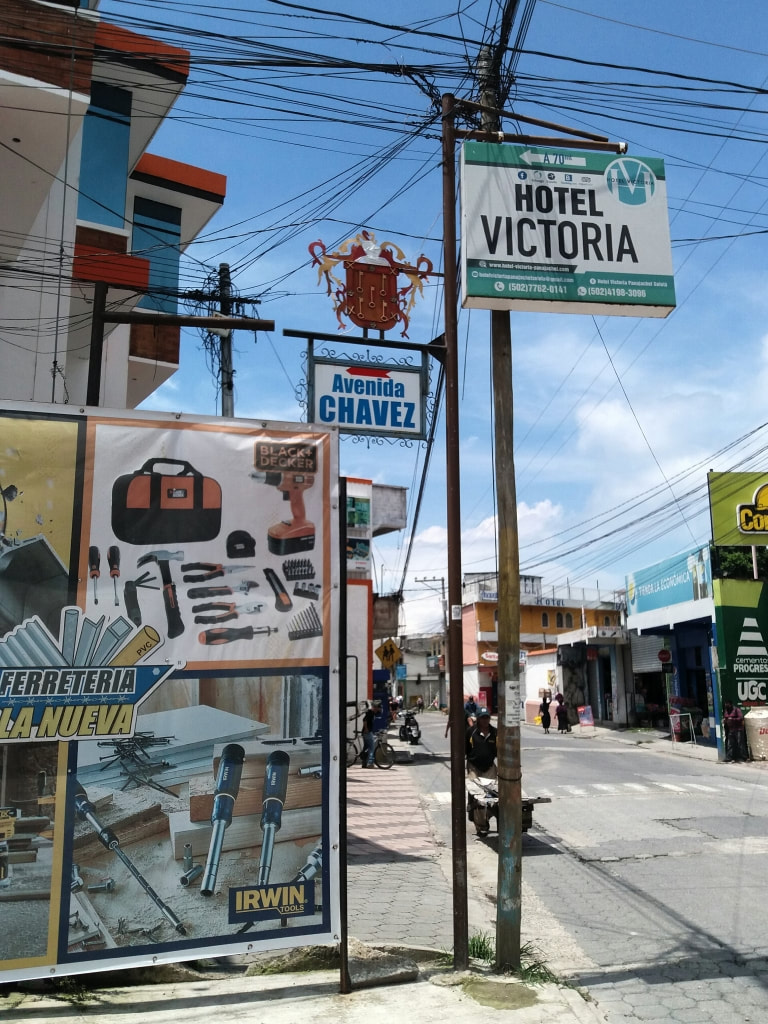 If you are travelling slow, get a long-term rental and save yourself some big bucks.

My preferred modus operandi for finding the best deals on accommodation is to source a hotel on Google Maps and then message the owner.

Last year I used this method to great effect in Guatemala. I'd ask how much the price per night was and then ask how much was the weekly rate.

I know of two friends who booked a month on Airbnb without having checked the location. Both had found a great deal on the room but the location was as bad as it could get. Their great deal was miles from the centre and one, they weren't even near the Metro or MetroBus route.

Or sometimes I would just book a place online for a few nights and then spend the first day looking for a better deal.

If I am in a big city, I want the hotel to be around 6km from both the central area and the main transport hub. I travel light, so walking 6km is no big deal. But any more than that, it just gets less convenient. 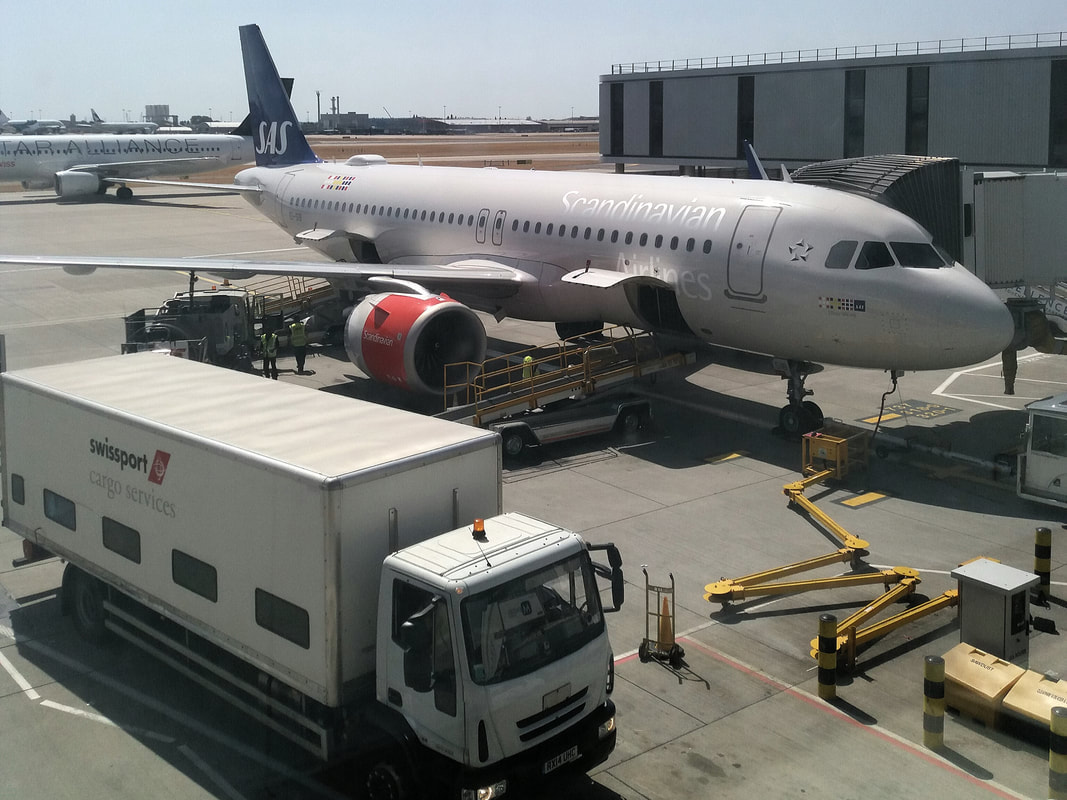 The best deals on flights are for those that leave (mostly)at inconvenient times. When I still had a base in England, at my dad's, Luton Airport was the nearest. But to get there for even a 9 am flight necessitated taking a 30 quid taxi. Christ knows what it costs now. And then you had a limited free luggage allowance, you had to pay for a glass of water on board, and there were jokes that they were gonna start charging for the air you breathed.

The local train station was an 11-minute walk away. Trains to Euston used to run frequently and was easy to jump on the Tube to LHR. The flight departures were considerably more convenient, with no need for a peak-time rail ticket to London, you could check-in up to 20 kg for free, and they used to feed you.

For me, the extra I paid for these flights over the cheap and nasty budget airline flights was outweighed by the comfort and convenience and the costs involved in getting to the airport at an unsociable time. #FalseEconomy. 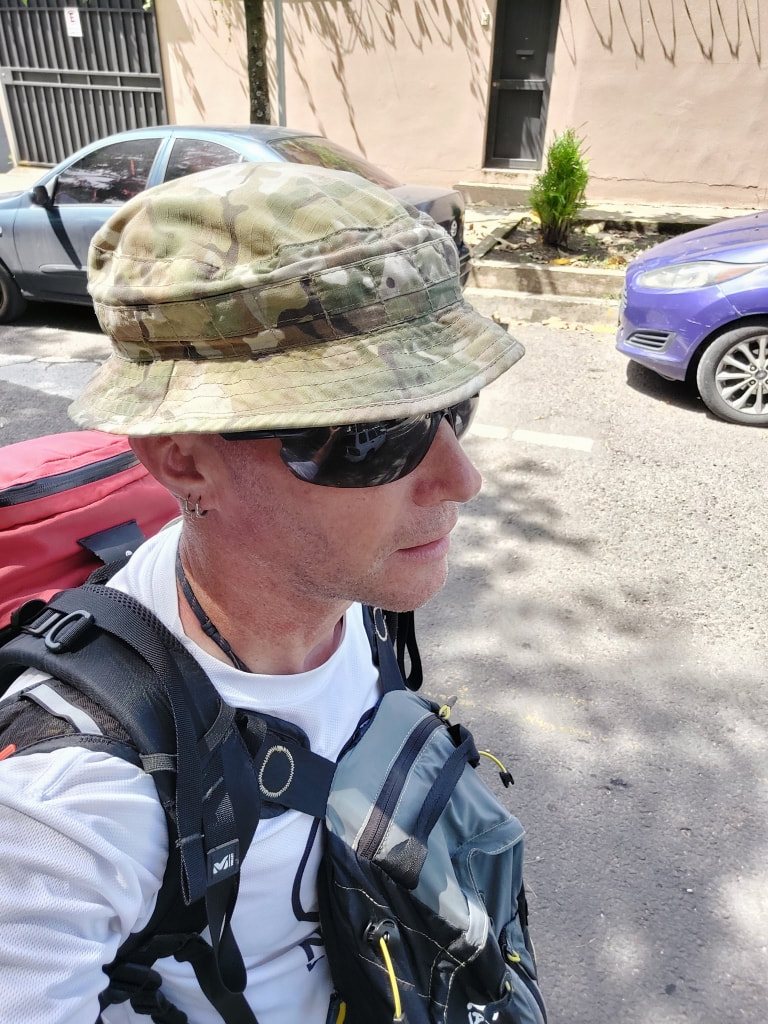 I can't recommend the concept of travelling light enough.

I travel light so I do not have to rely on public transport or taxis to get to and from my hotel, saving myself money in the process.

Choosing a hotel within a 6km radius of both the bus or train station and the central part of town is essential. Of course, I have walked much more in my 30 years as a long-term, low-budget traveller backpacker.

After an 18-hour bus ride, I relish the idea that I can stretch my legs again. Who wants to sit or stand in a bus or taxi after having been immobile for so long? Hell, I love a good walk after even just a 2-hour bus ride.

If you are a long-term traveller but still like to switch places every few days, have a 20 kg backpack and chose a room 15km from town, that is nowhere near the metro route, imagine. 2 or even 10 USD every few days soon adds up.

I have travelled through 105 countries; that's more than 1000 different cities or towns and villages.

I have walked or taken cheap public transport to the hotel from the bus station and downtown almost everywhere.

I walked in Pretoria, dumb idea, Pietermaritzburg, even dumber idea, Cape Town, yeah this one nearly cost me my life. I walked in San Salvador. I took the metro in CDMX.

In Bali, Senegal, China and many other places I have walked with all my stuff, all freaking day. In another life, I walked 1071 miles from Lands End to John O'Groats for fun. So I am not averse to this MO.

But I am happy to say I took a taxi in Honduras when going to and from the bus station with all my stuff #BeingSmart. I weigh up the odds. Putting yourself at risk is not worth the 4 USD taxi ride.

Even in CDMX, the main bus station is within walking distance but it would mean passing through some sketchy areas. The metro costs just 5 Pesos. To walk would be #foolish.