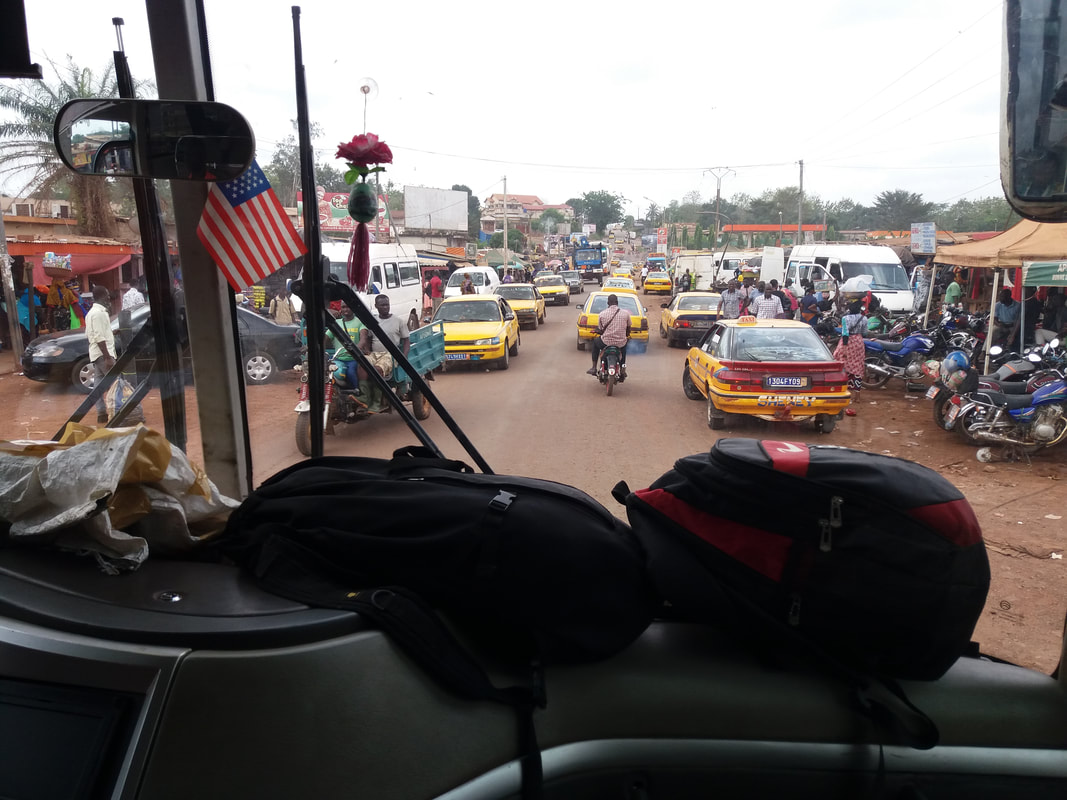 The bus station in San Pedro is about 4km north of the town. My tactics have changed somewhat. Before I would walk that sort of distance. 5 or 6 km was quite acceptable to walk with my light pack. Now I think, fuck it, life in West Africa is tough enough I don't need to make it tougher just to save a 40cents ride.

'Forewarned is forearmed'. English is not widely spoken in West Africa. But on my UTB bus were a British couple, also backpacking, a guy that worked in the maritime industry and thus spoke perfect English. Even the bus driver spoke English. So I learned that a shared taxi into town was just 200XOF (40 cents). A helpful tout got a taxi to stop and I was quoted 1000XOF. There was already a lady inside. So I just smiled and said '200'. And got a look saying 'shit, the toubab knows the local price'.

But let me add, I don't always walk just to save some money. I walk because I have been sitting for the last 10 hours so I need to stretch my legs and also, taking a taxi always requires bargaining. Not my favourite past-time.

Hotel Atlantique on the main drag is the place to stay. There are 5 floors, maybe 100 rooms. The cheapest is 15,000 XOF. That's 25USD. And no breakfast. But fast WI-FI and much needed air con. I paid for 2 nights upfront and got a discount, 13,000XOF a night. Not a lot but a saving none the less. In West Africa, every dime saved is a blessing.
Accommodation is expensive. Food on the other hand is cheap but not always hygienic as I need eat in a place with a bathroom.

In a side street very near the hotel, I refreshed myself with a cold IVOIRE: 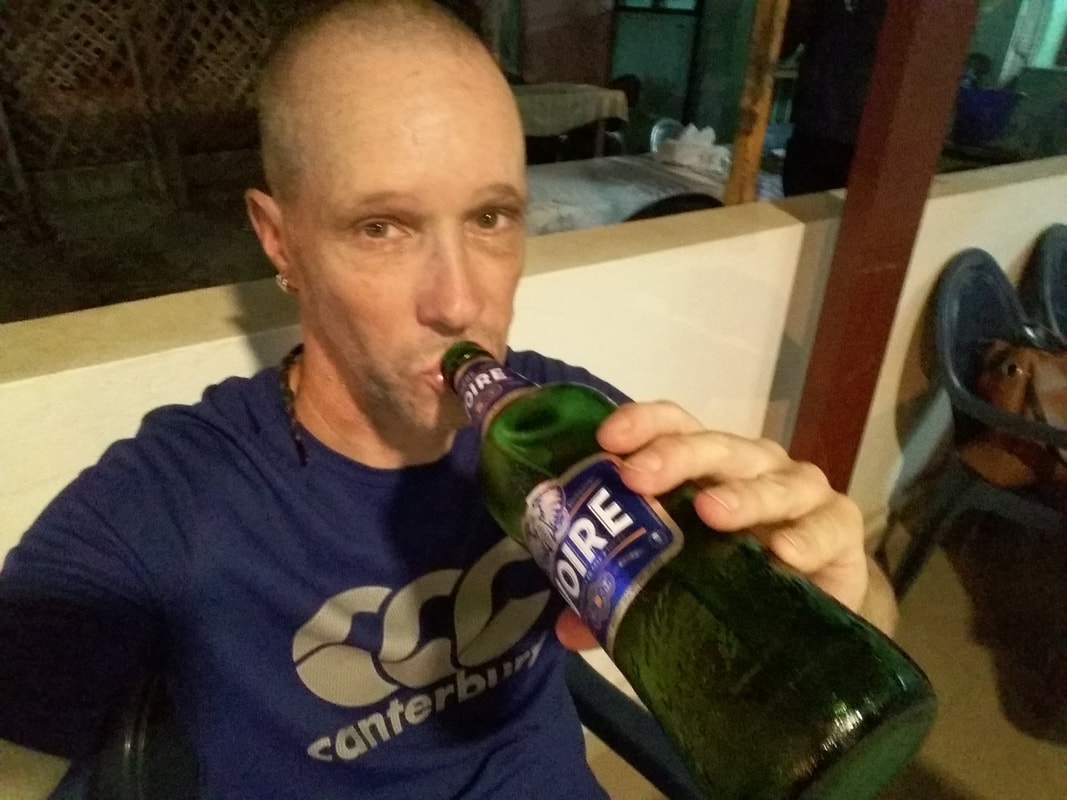 The next morning I set off to explore. I walked via the port but there was nothing to see. Eventually, I arrived at the beach. It's just a beach. Nothing special. Swimming is not something I like to do unless its only chest-deep and as flat as a millpond. I got rolled in Goa. Never again thank you very much. There were quite a few beach bars. All deserted. A few out of work guys found me, looking for a free drink or some kickback. One particular place caught my eye: 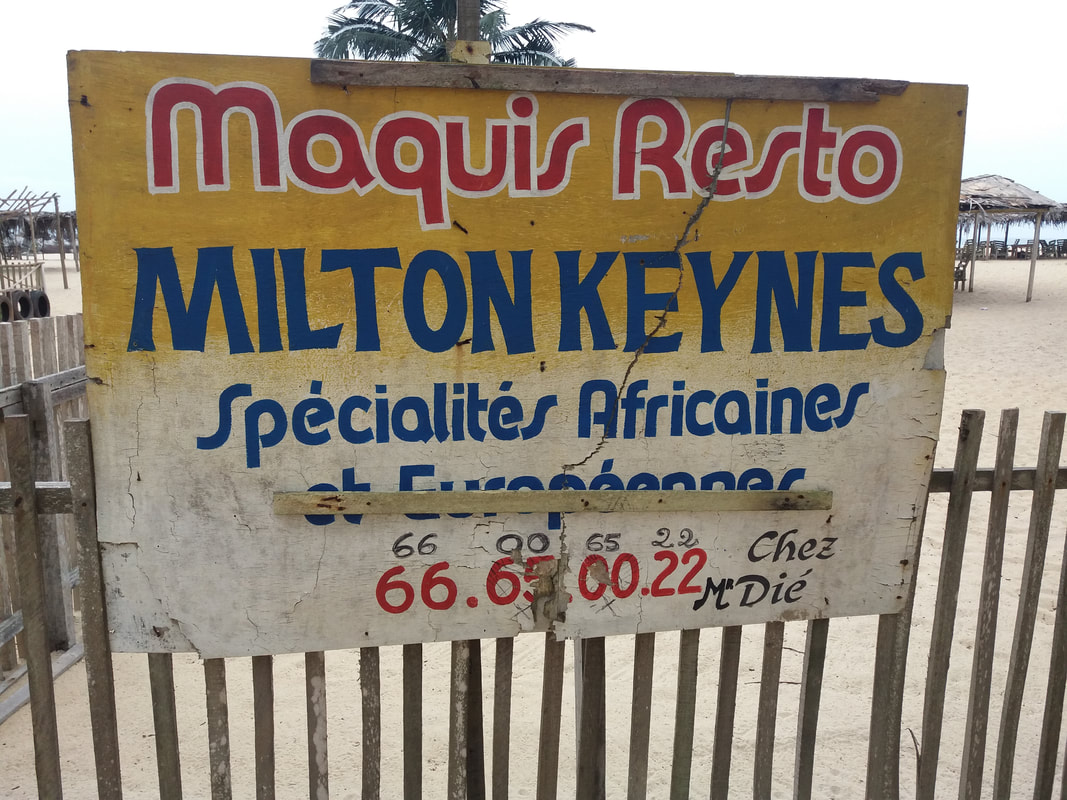 Milton Keynes is where I am from. Well, it's a New City incorporating my town. It's home of the MK DONS football club, famous for round-a-bouts and concrete cows, one of which was stolen who went by the name of Millie.

All I could make out was that the owner or previous owner had connections to the UK. And they had no cold beer. The girl was bored and not interested to go and find me a cold one, so I continued.
The next place had cold beer but 'we only have this one that's cold', a steep 1000XOF for a dark beer from Munich.

The girl said she didn't have any change, so encouraged me to have a second which I wasn't keen on doing. I had skipped breakfast! She also wanted me to buy her a beer and the guy who found me also wanted one. This is coastal style in Cote d'Ivoire. It wasn't the last time this happened.

So I walked up to the bar to pay. And there was a fridge full of cold 500XOF local beers and a guy who was sleeping behind the counter with a wad of cash.
The girl grabbed my hand, called me 'bebe' and said 'you want to fuck?'

I said I was married and had 2 daughters. She wasn't put off. 'Moi Aussie'. I'm am 50 years old. I am not a catch. She wants to fuck cos she needs to feed her kids and her 'husband'.
It was just 11 in the morning and she wasn't cute and I wasn't feeling very charitable.

As I wandered off, she tried one last time, 'Je t'aime'.

The evening was spent putting together my Mud Mosque of Kong post.

Next stop, Sassandra. It's only 70kms away but it took an age faffing around picking up bags of cement, an AC unit, and other assorted crap. He must have been making a packet as we left town with hardly any passengers.

Sassandra is quite a cute little place. I took a non AC room at the Hotel La Côtiėre for 6,000XOF. Also staying was a German-French couple on bikes. They'd biked down from Spain, through Morocco, Mauritania, Senegal, Gambia, back into Senegal, into Guinea, Sierra Leone and Liberia. We took dinner together on the beach.

They left the next day so I upgraded myself to an AC room at 10,000XOF.

Here's a little eatery where I had my omelette baguette and 2 mugs of Nescafe and a little water sachet: 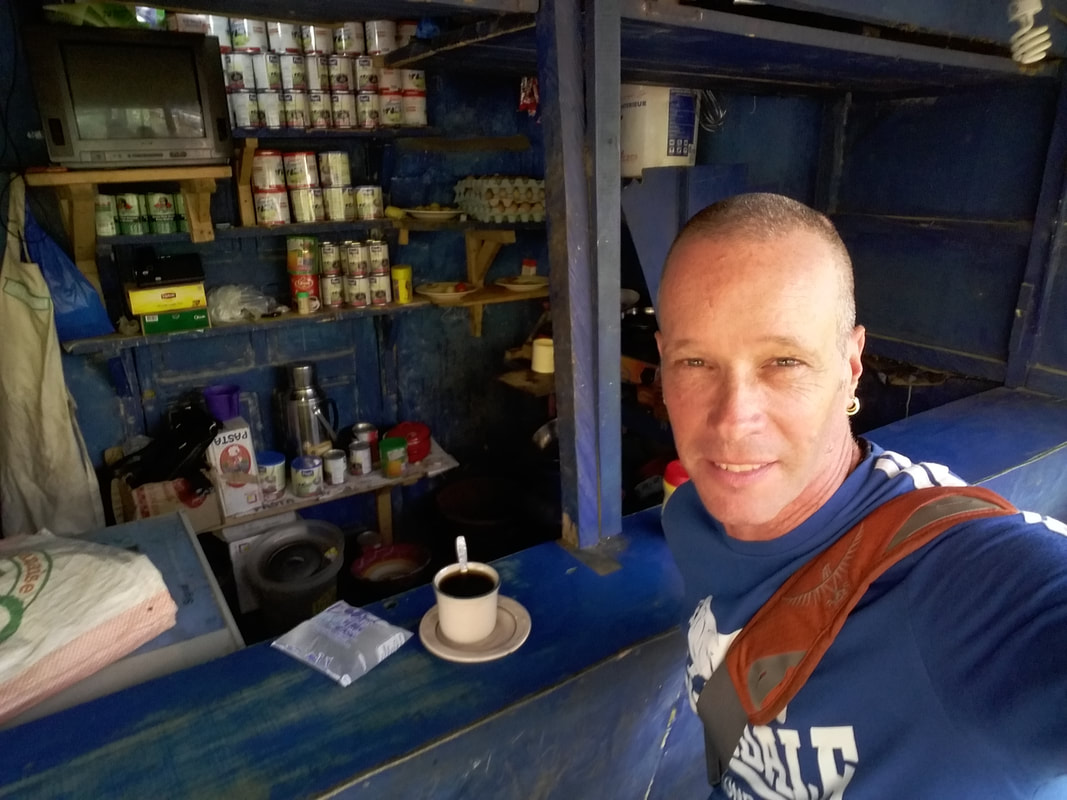 Sassandra is an OK place to mooch around for a few days. I found a place for lunch serving rice and meat stew. I found a tiny 'internet cafe'. I paid 200XOF to get connected for 1 hour. And then over the next days just walked past so any messages would be picked up and I could reply off-line before an evening stroll whereby my replies would be sent: 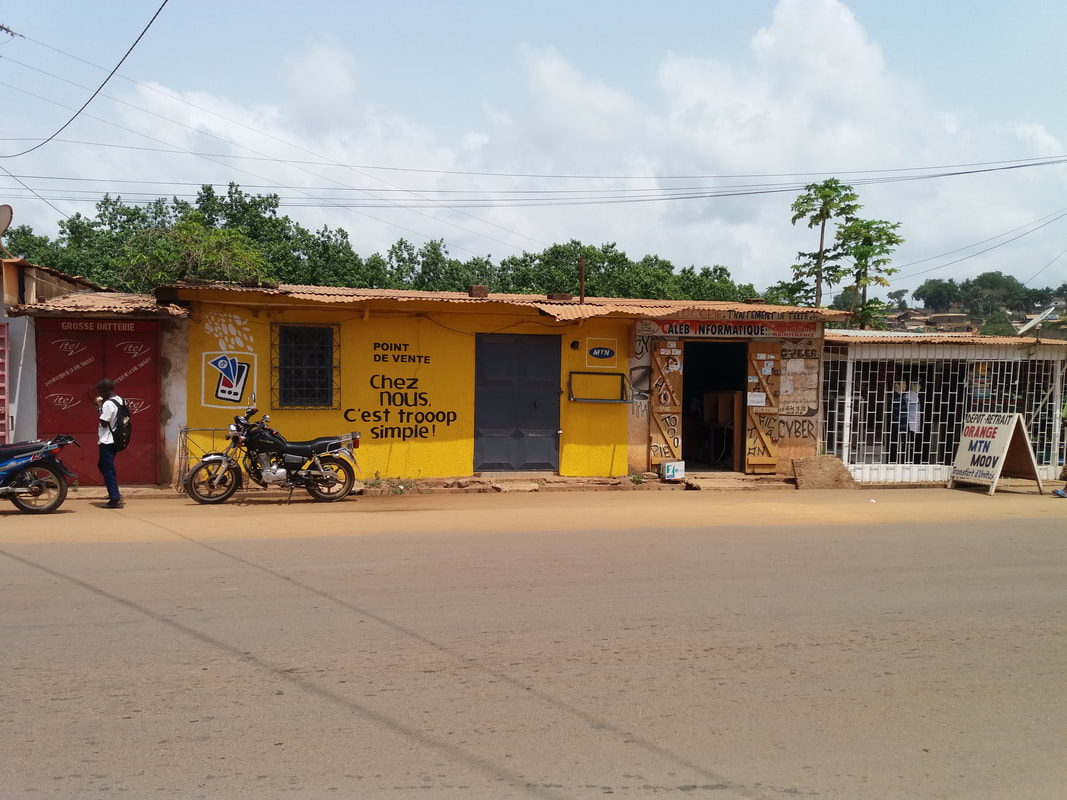 ​Sassandra is a fishing village. Right behind the Hotel La Côtière is where the boats set off from around 3 pm and come back to at around 2 am.
The people here are not fond of having their photos taken so I get sneaky shots and purposely avoid getting anyone in the photos: 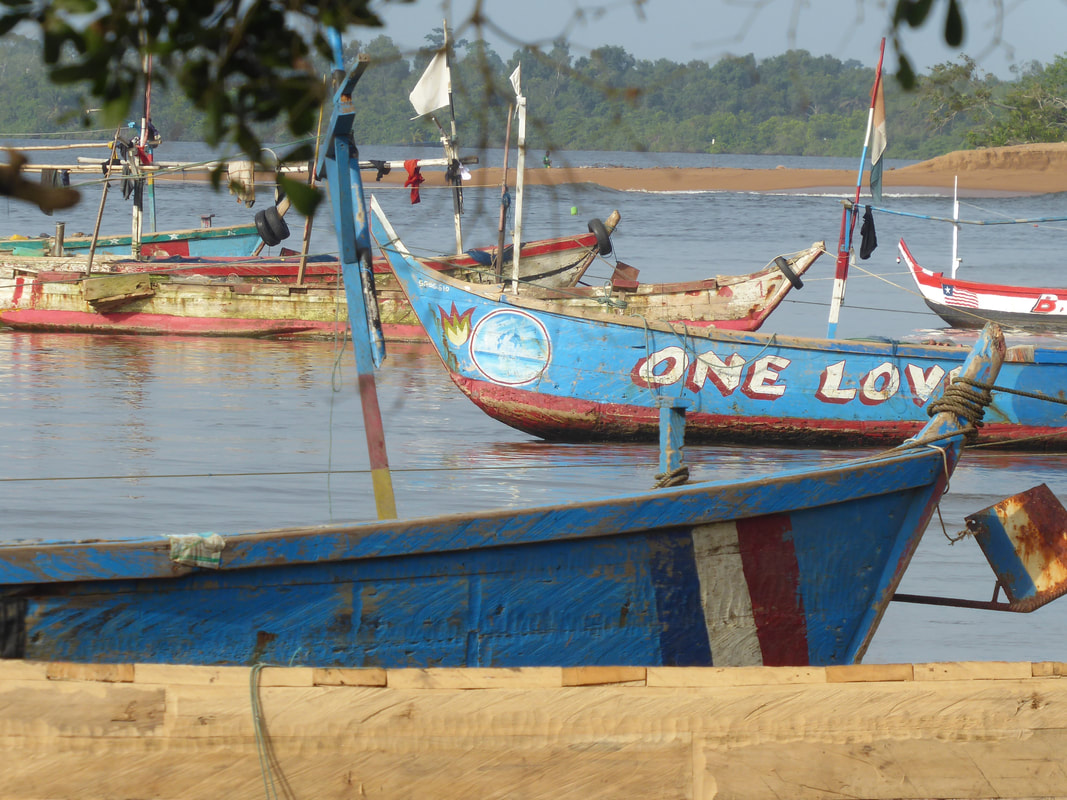 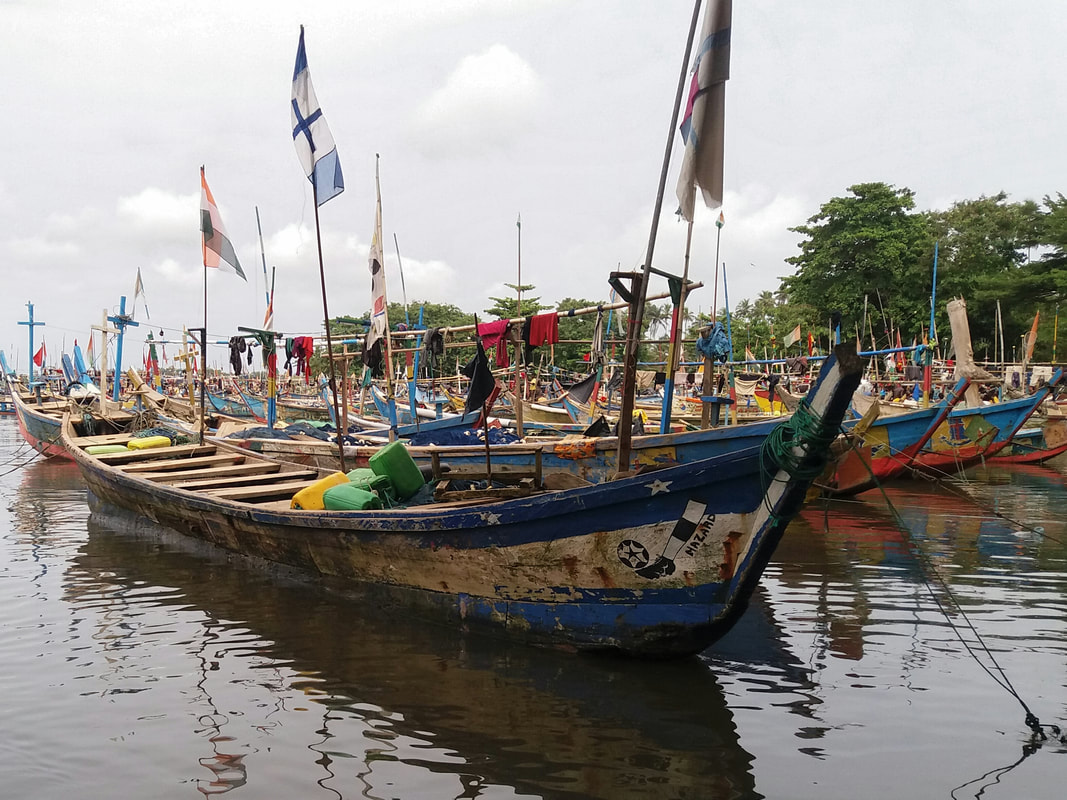 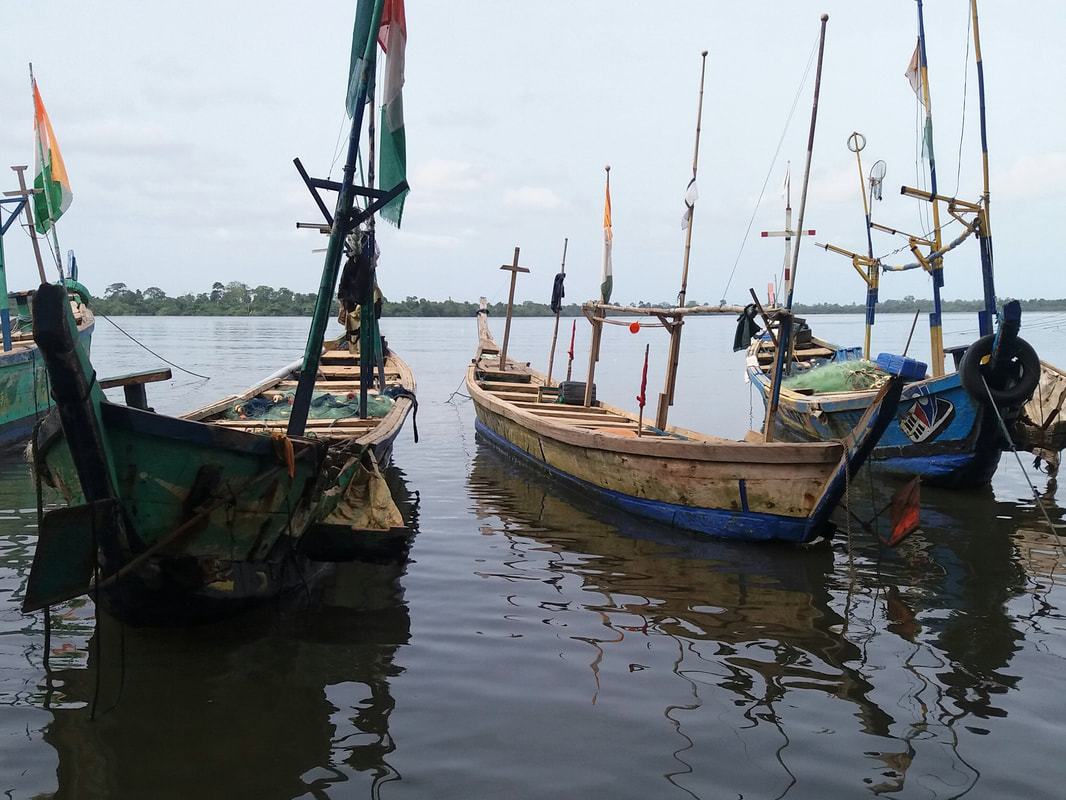 The beach was mostly deserted. The waves are too big for swimming and there are strong undercurrents. At the eastern end of the beach on a small promontory is the 'Old Governors' house: 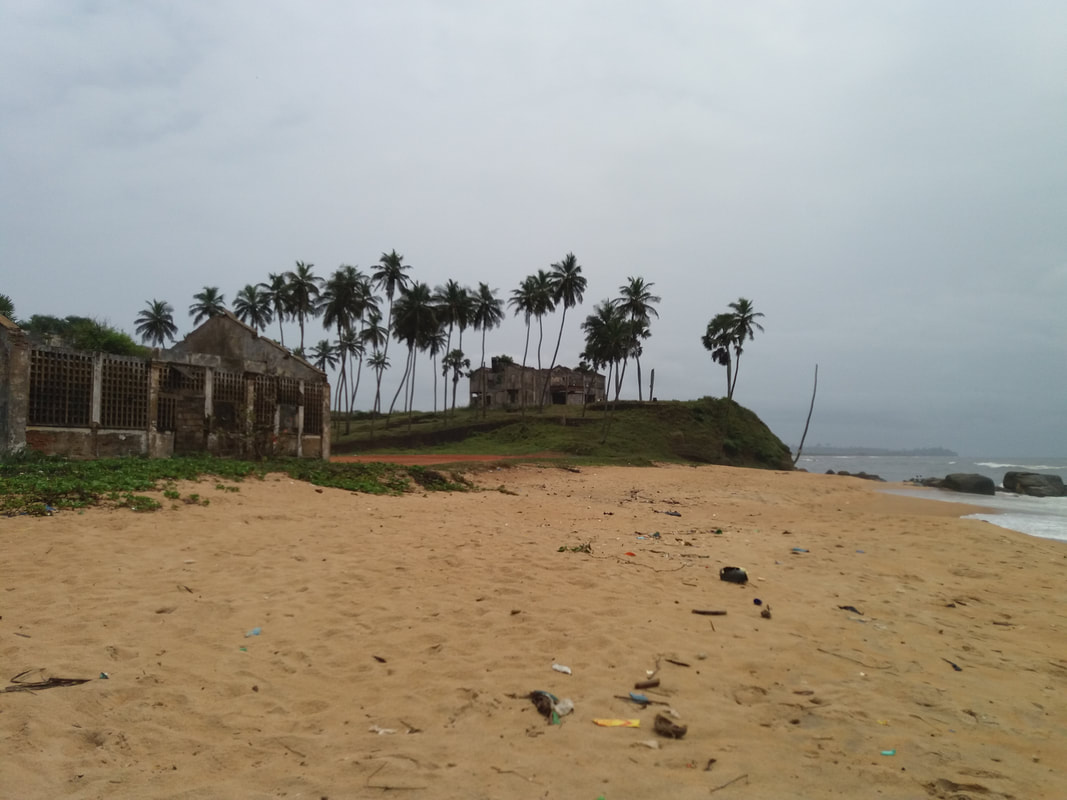 A good place to scramble around in and get super birds eye shots of the fishing boats heading out to sea. 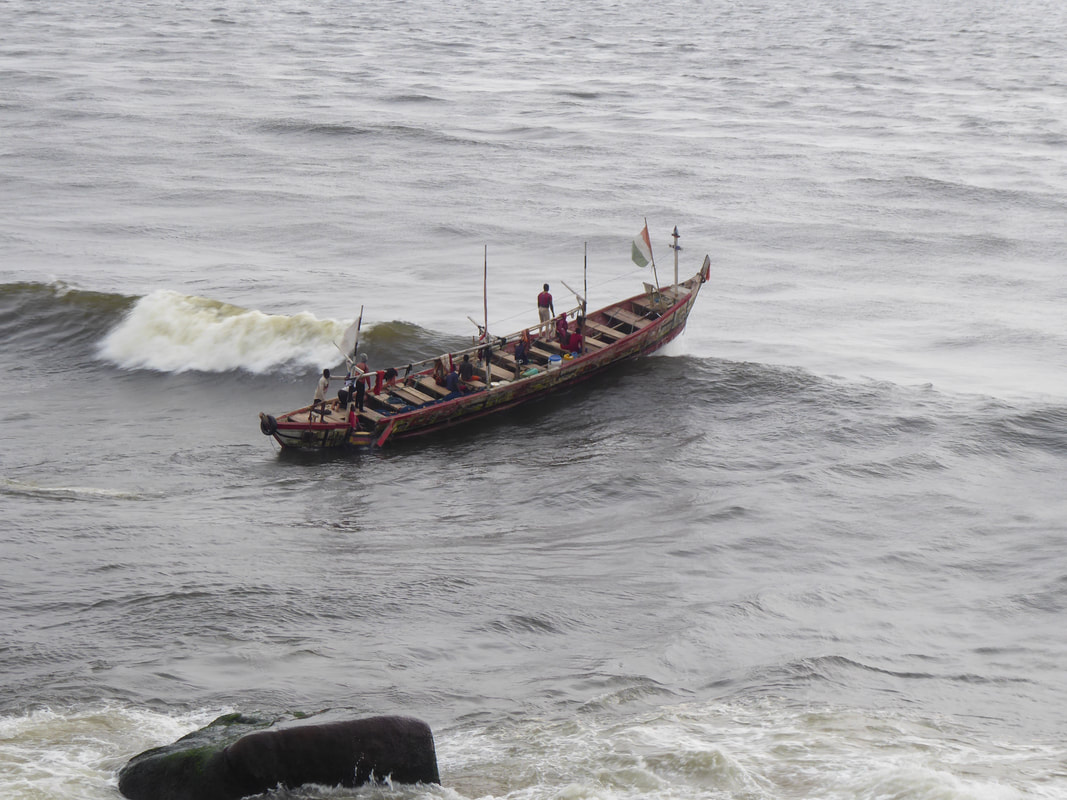 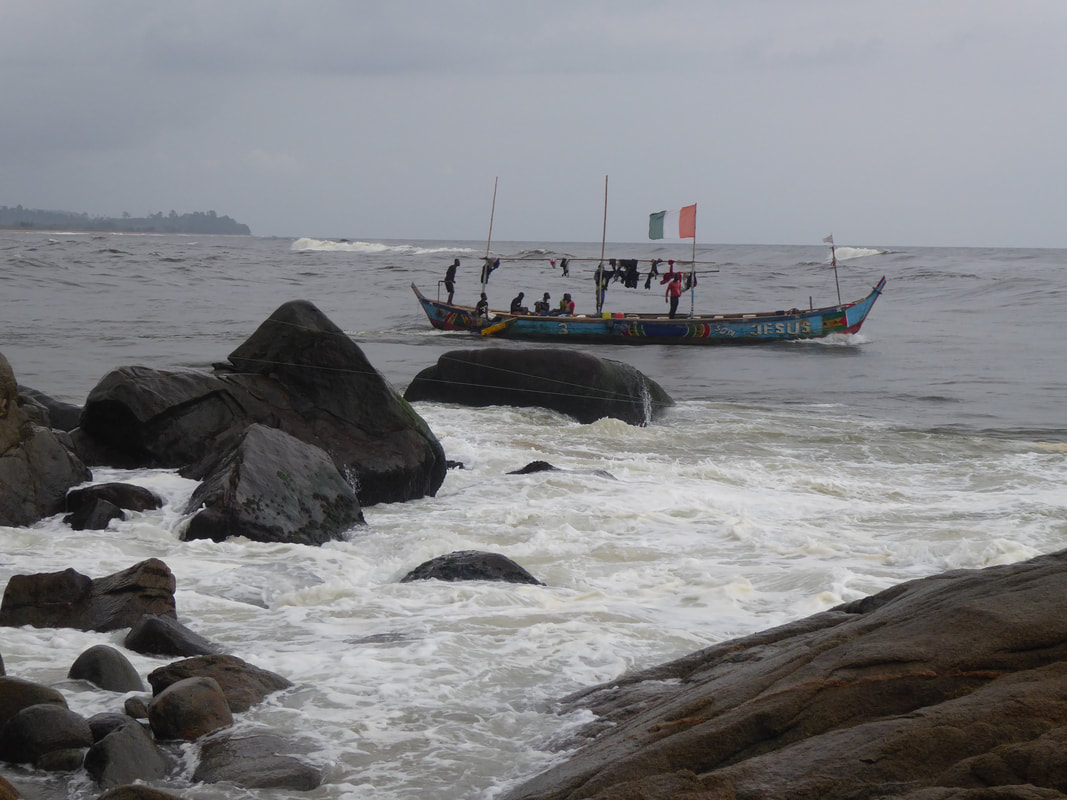 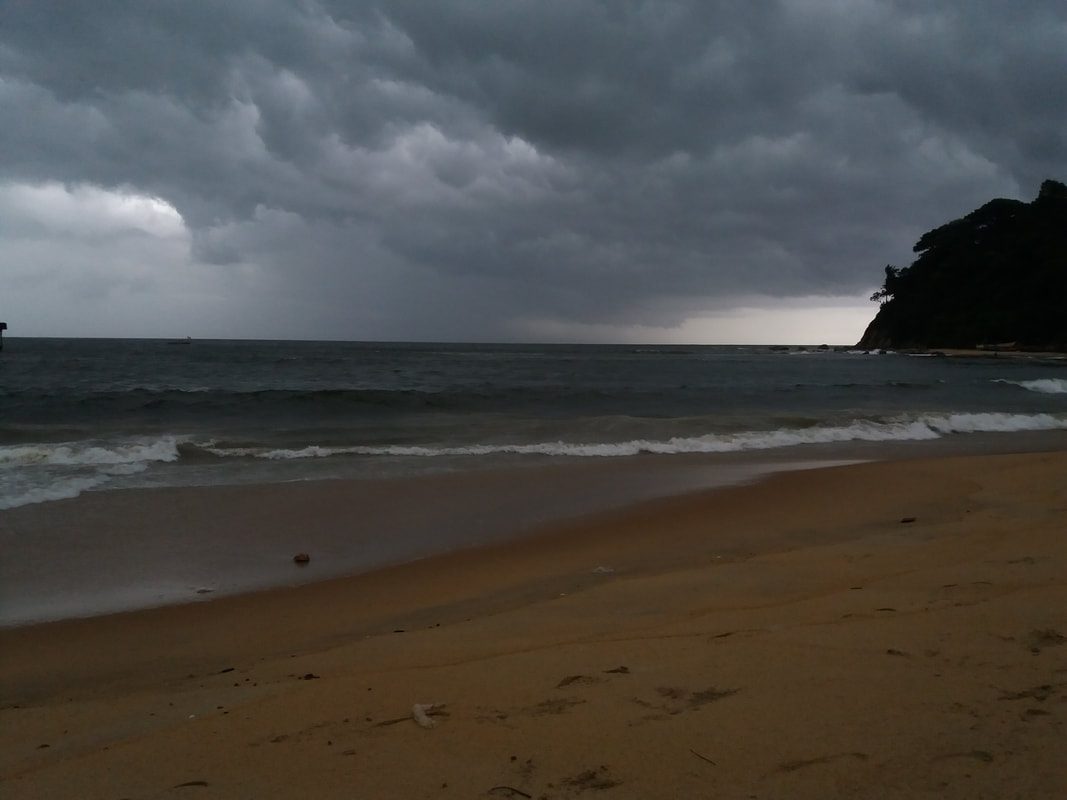 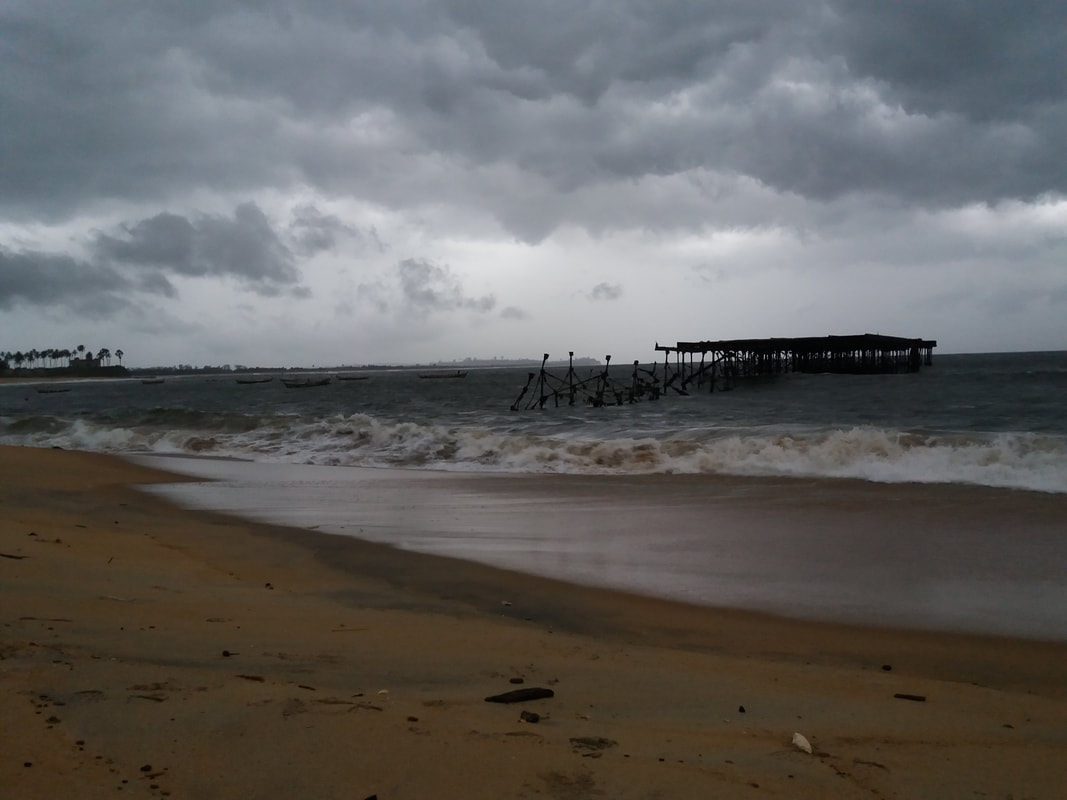 3 nights was enough. I was up super early to get the 5 am bus out. But of course, we didn't leave 'til 7 and had a breakdown along the way. By 2 pm I was in Abidjan. By 3 I was in Grand Bassam. West Africa was drawing to a close.
​