Connect on Twitter
Bletchley Park where Alan Turing and a team of dedicated and highly intelligent individuals worked on cracking the Enigma Code used by Nazi Germany during the Second World War.

Their efforts played a very crucial role in shortening the war and the course of our futures.

And all this happened not more than 10 minutes walk from where I grew up.
​
And as I wrap up my life here, following the death of my father, I take one last opportunity to go and backpack it. 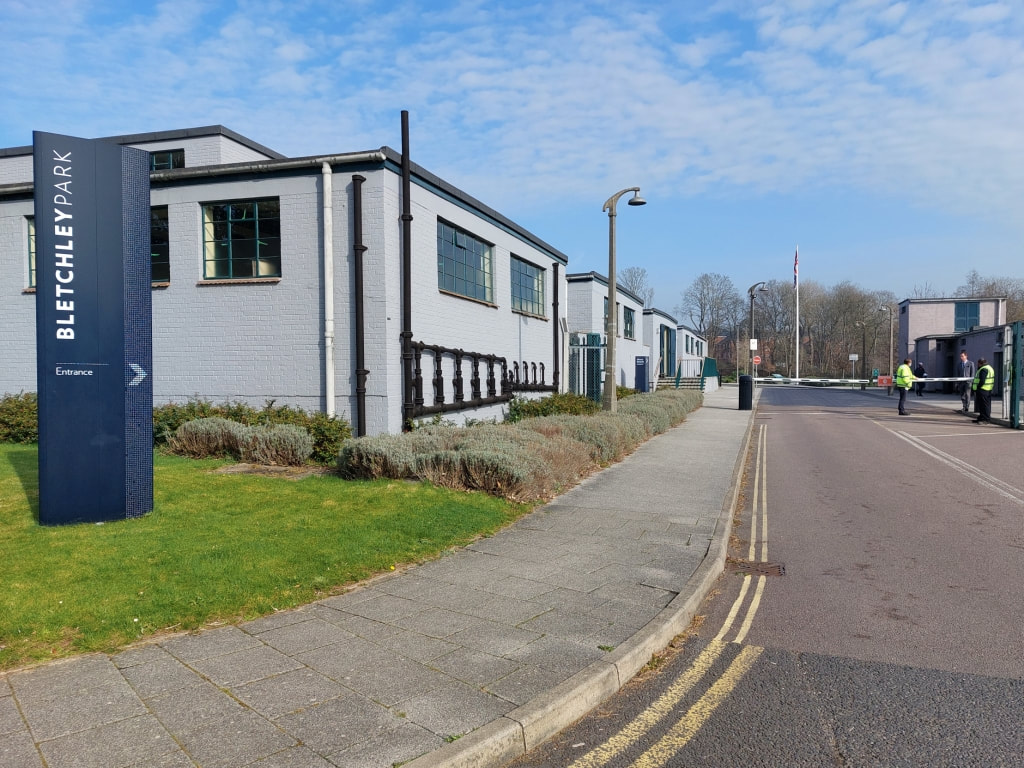 ​We all knew of its existence but it was never talked about. The work was hush-hush. Everyone who worked there had to sign the Official Secrets Act. And after the war, almost everything was destroyed. But it wasn't until 1987 that the place was finally closed (I periodically delivered newspapers to the Bletchley Park mansion in the early 80s) and in 1994 it was opened by HRH The Duke of Kent​ to the public as a museum. 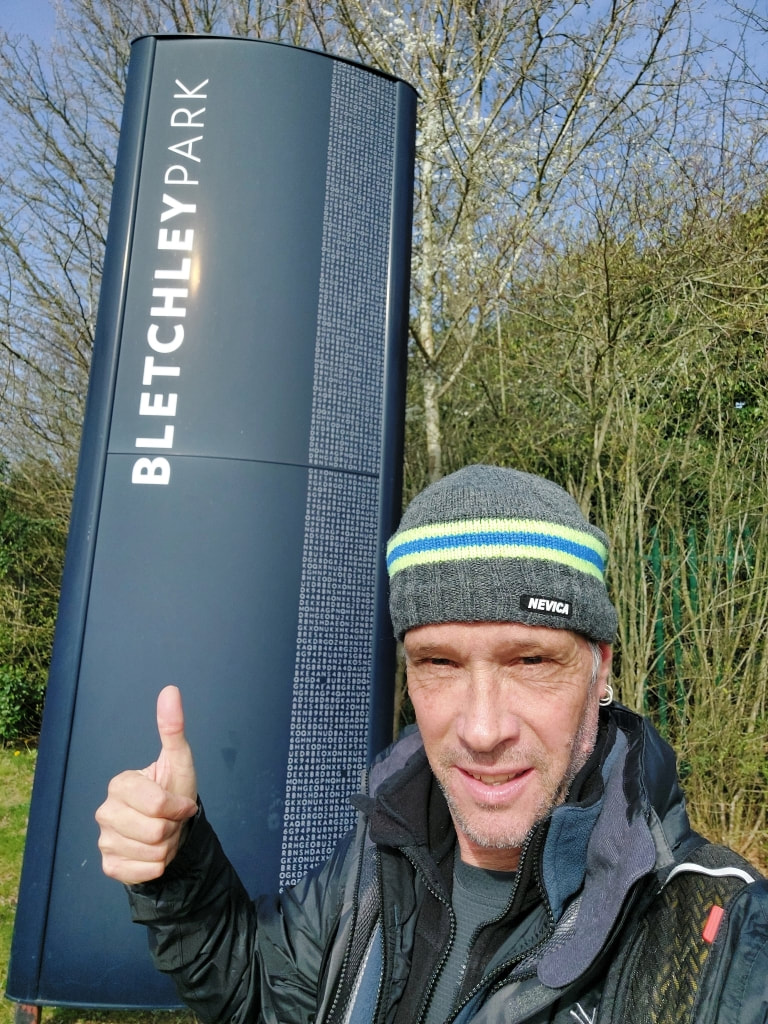 Ad
​I am fascinated by this stuff. I love military history.

I love the history that I can relate to. My dad was born in 1940, evacuated to Liverpool which incidentally got bombed way more than Stanmore. My mum was born in 1942. Her dad was RAF ground crew. Her mum was in the WAAF.

I lived through the Cold War era, the Falklands War and the Balkans War. This is history in my lifetime. I find it hard to relate to the Spanish Inquisition or other similar events where history is based on what historians think happened.

I have been to the resistance museum in Copenhagen and the Cold War Bunkers, Checkpoint Charlie, the Glienicker Brücke and a few other key points in Berlin.

And now Bletchley Park, where the efforts here shortened World War II by a minimum of 2 years.

I got a local-resident discount of 50%. Check out the Bletchley Park Website for any updates on entrance fees and opening hours. 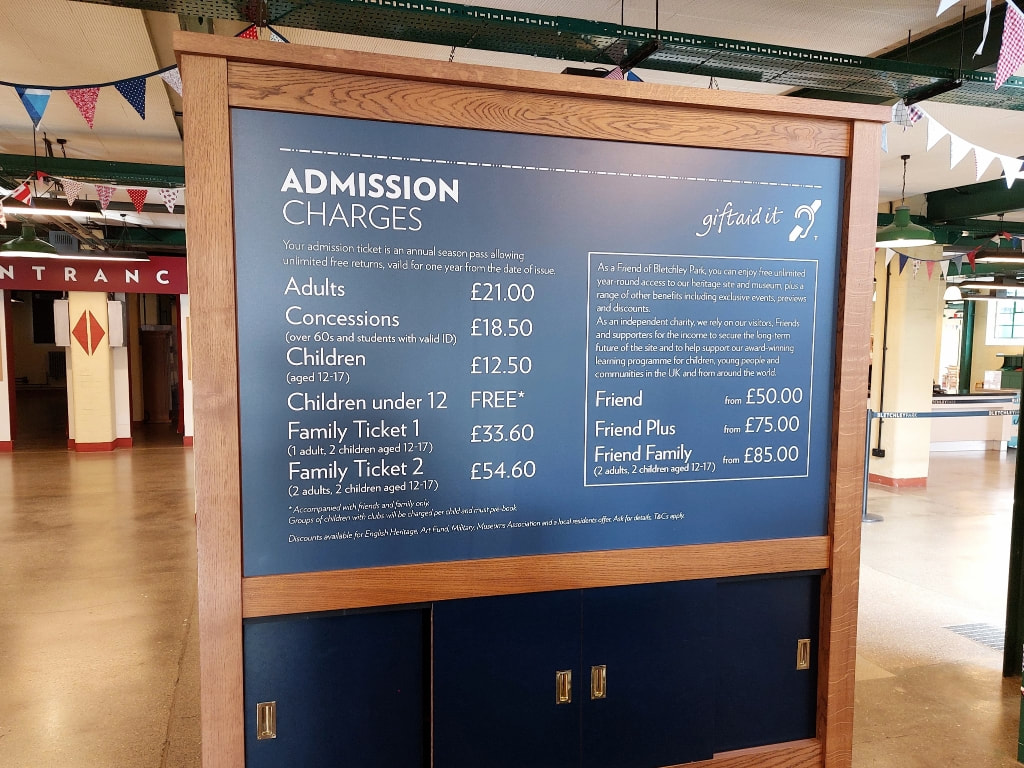 ​After my visit, I spent days trying to condense the details for a blog post, a hard task when fiction and non-fiction books have been written about Bletchley Park.

Robert Harris wrote a novel based on Bletchley Park, entitled ENIGMA (yeah I read this book too), a film starring Kate Winslet based on that book was produced in 2001 which I will watch with Miss CDMX when I get back to Mexico and another, The Imitation Game, starring Benedict Cumberbatch and Kiera Knightley in 2015.

And if you have watched this film, as I have, a few times, you might come away with the idea that Alan Turing single-handedly did everything. 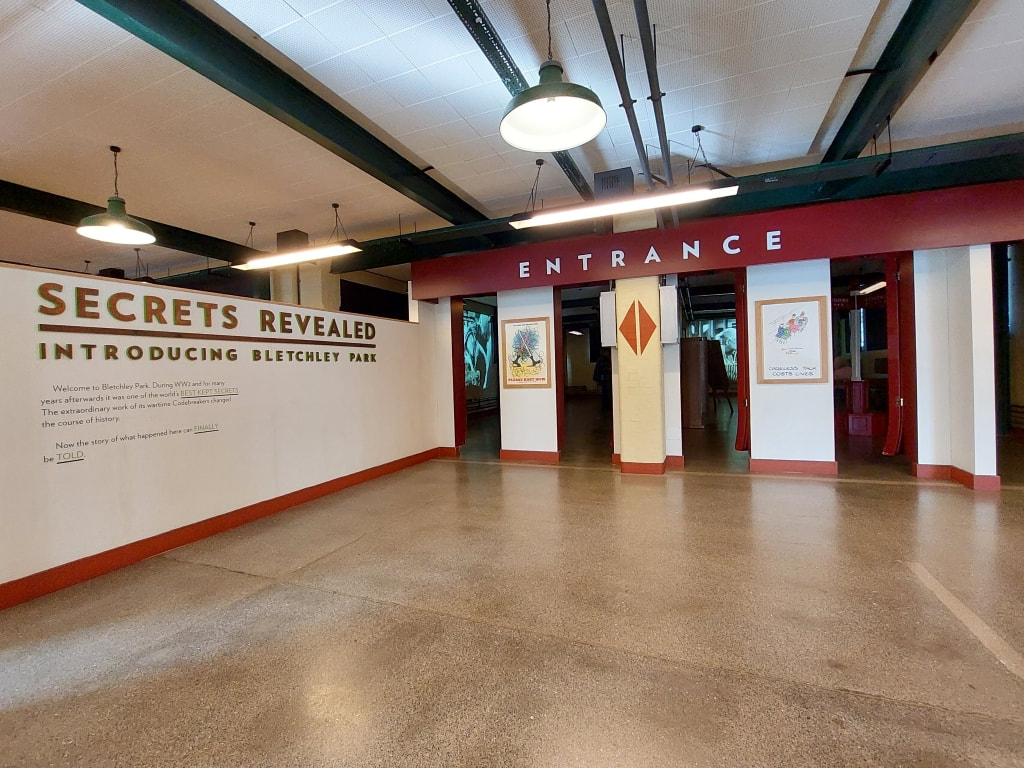 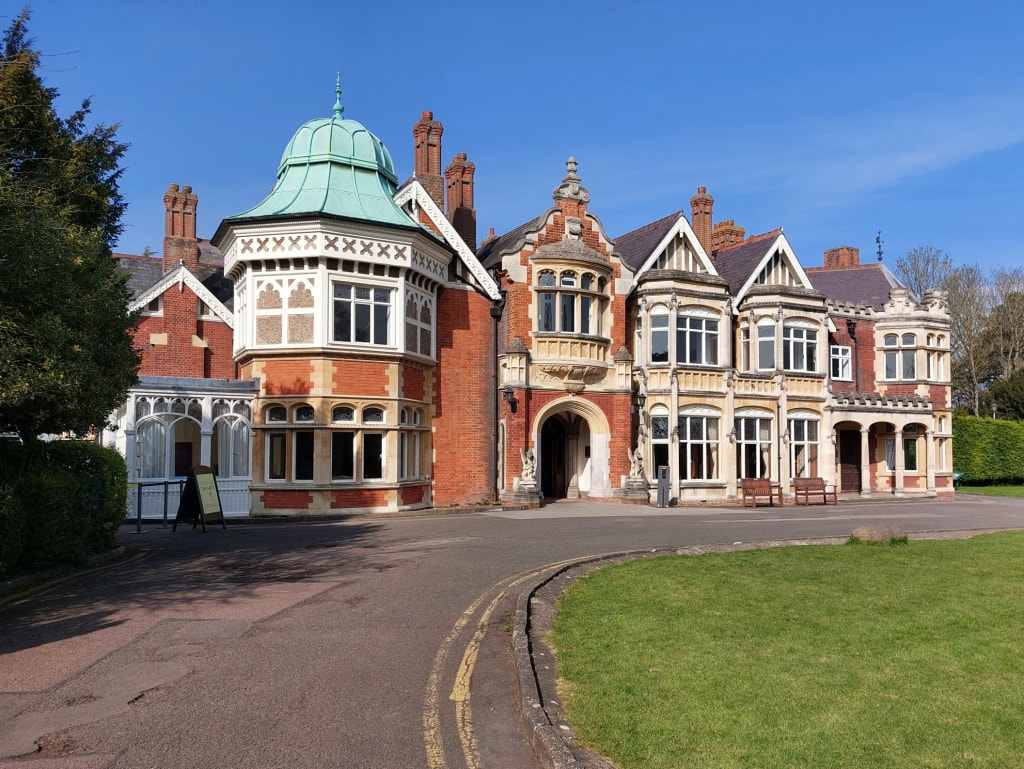 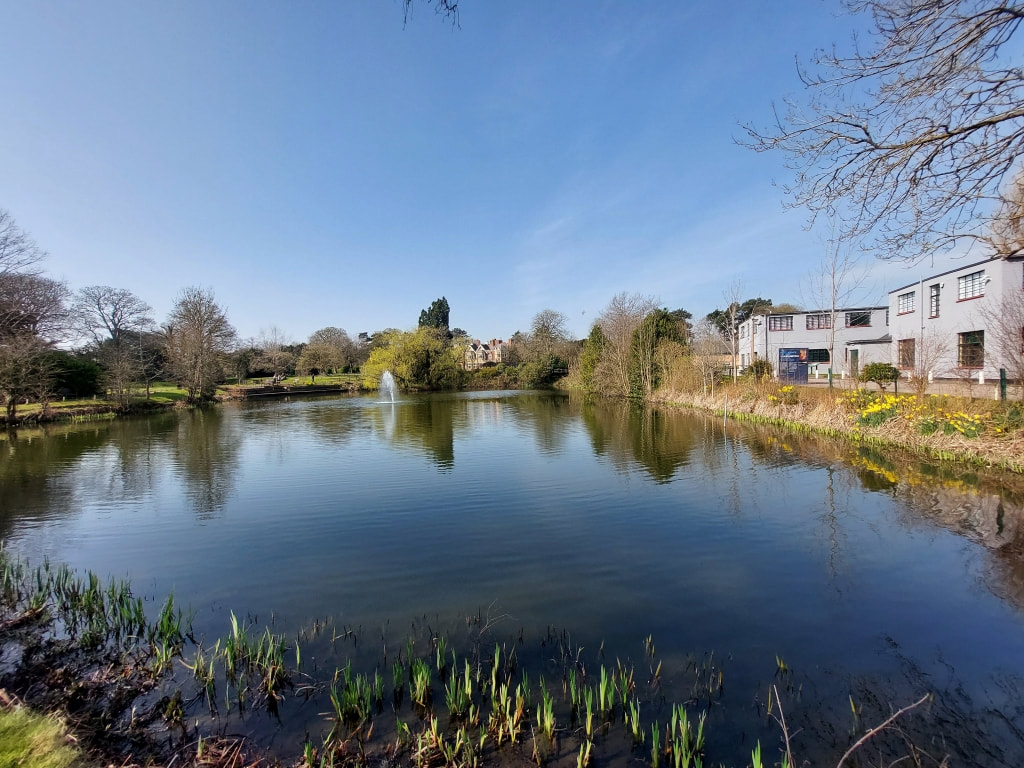 ​The Enigma machine was designed by a German engineer, Arthur Sherbius just after the end of WWI.

The Enigma machine was designed to encrypt messages by scrambling them into meaningless arrays of random letters.

When a message was typed into the Enigma keyboard, the 3 rotors changed each letter to a different one, which would then light upon a display above the keyboard. The new letter would be written down and then the whole message would be sent as Morse code and then the operator on the receiving end, entered the scrambled message and the Enigma machine reversed the process.

The German military were using the Enigma machine for years before WW II and it was 3 Polish mathematicians, Marian Rejewski, Henryk Zygalski and Jerry Rozycki who had learned how to read the Enigma messages and this intel was shared but on the outbreak of WWII, the Germans increased the security and changed the cypher settings daily.

There is an original Enigma machine on display at the Alan Turing Institute located in the British Library in London. 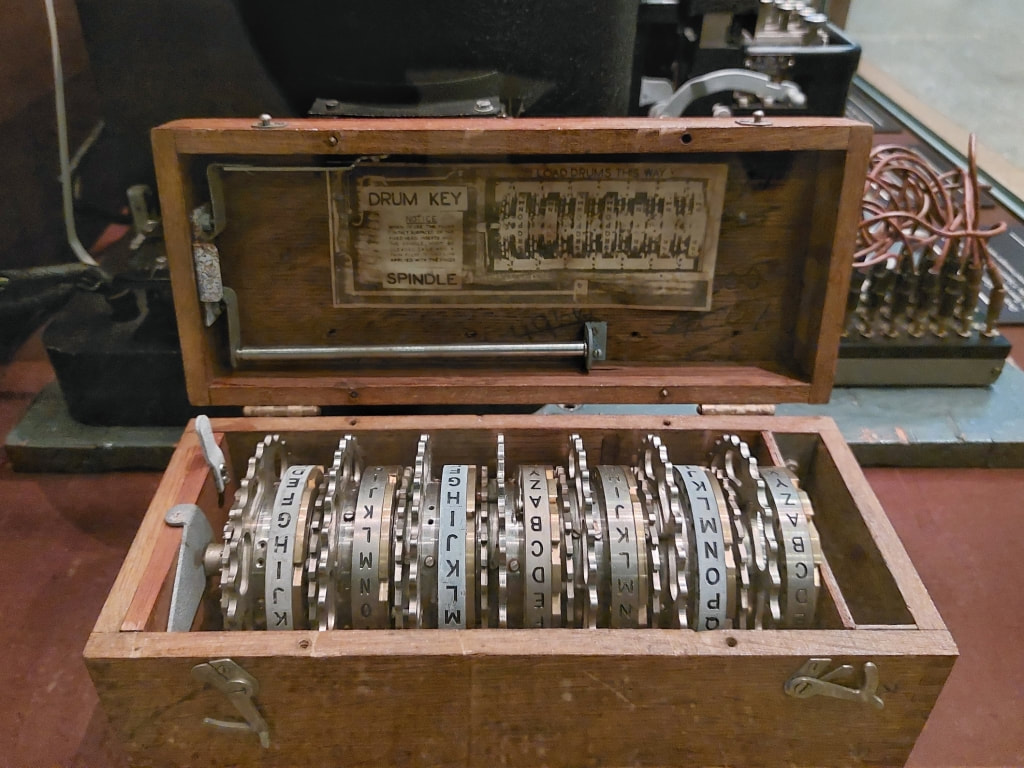 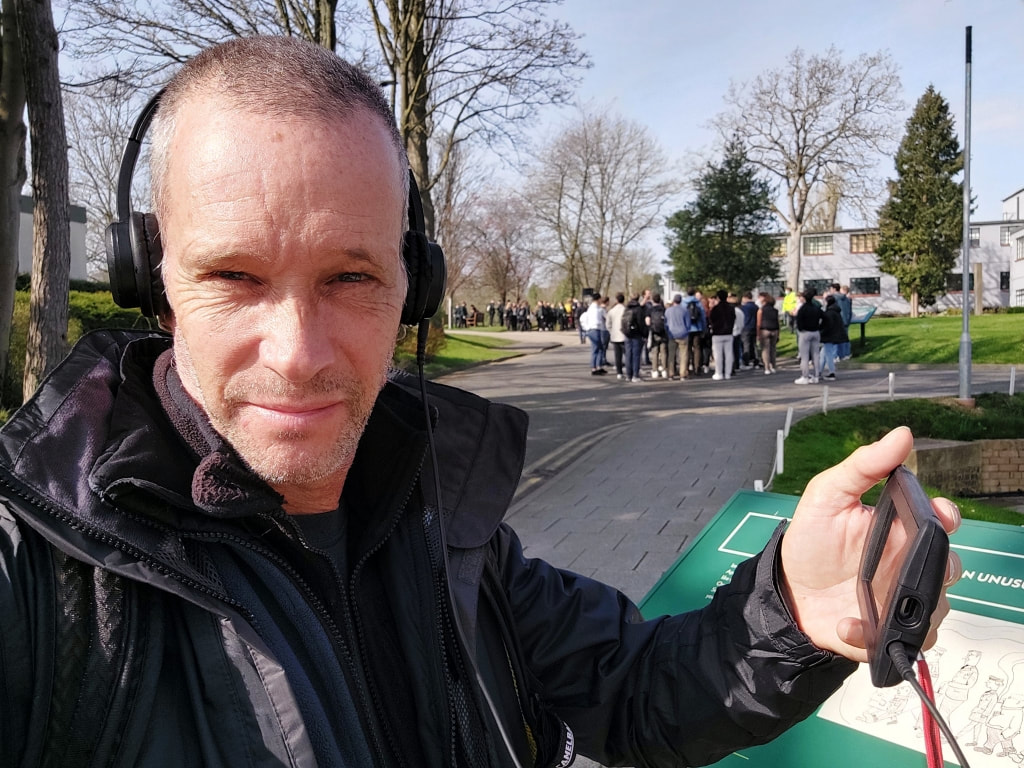 ​The British BOMBE machine was produced by the GC&CS (Government Code and Cypher School) at Bletchley Park by Alan Turing which was developed from the 'bomba', the machine the Polish had been using for 7 years before WWII, in 1939 with a significant upgrade designed by Gordon Welchman in 1940.
The main thing about the Bombe machine was that it could break the codes faster than a human ever could. 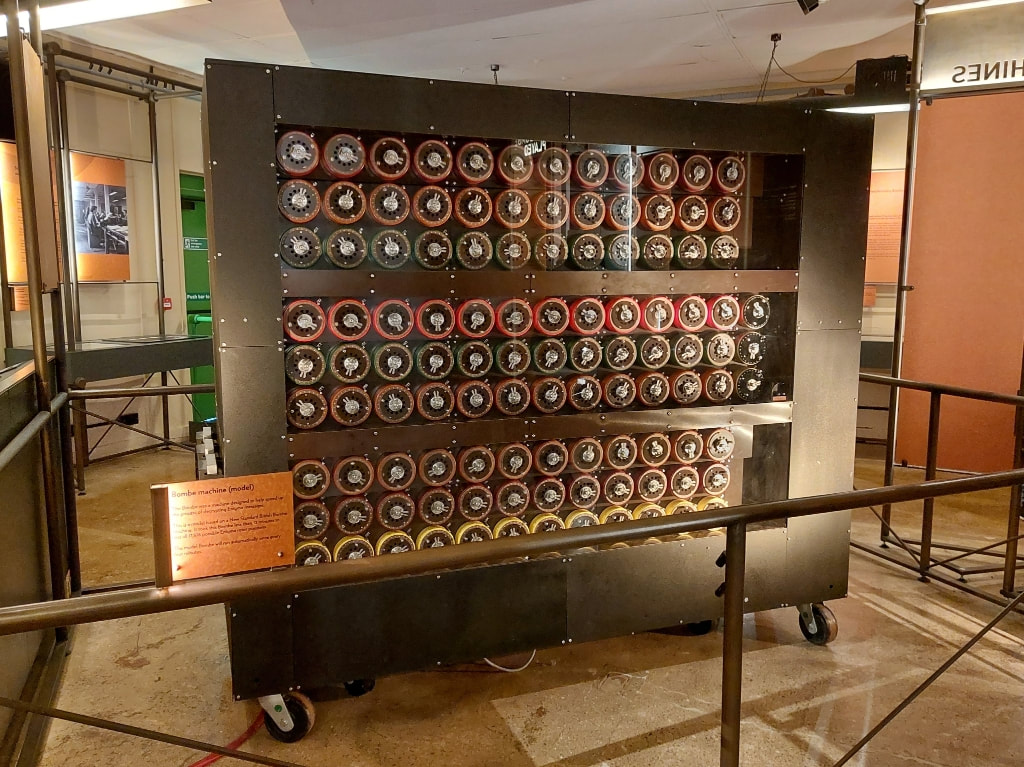 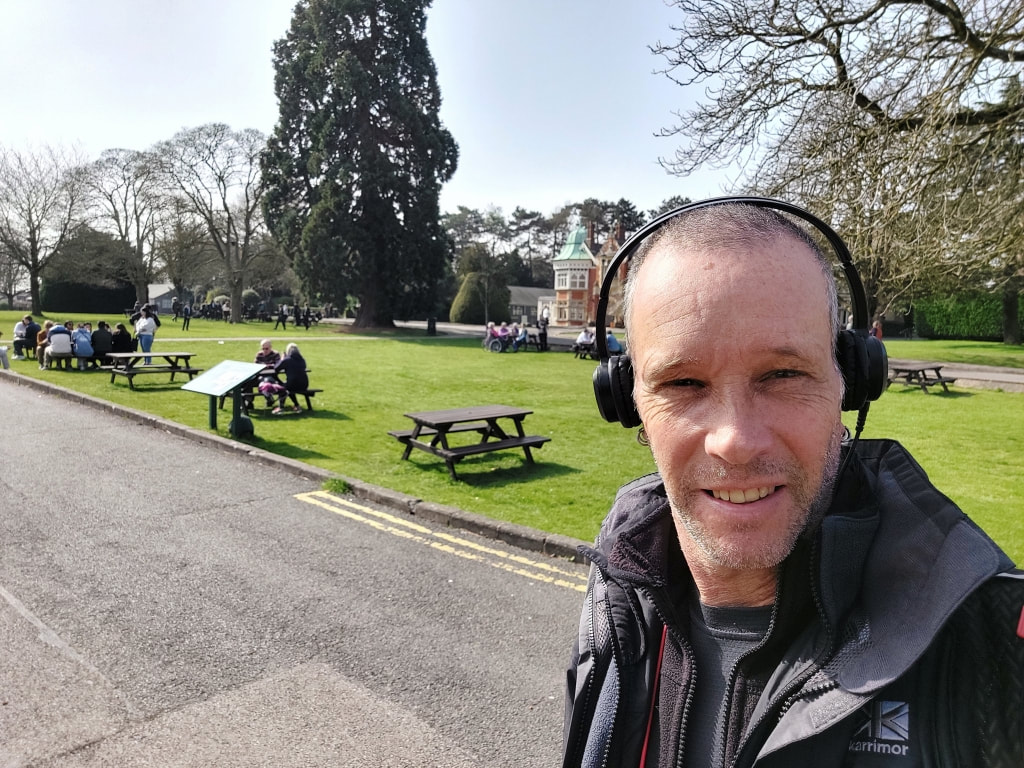 ​Hut 3 was one of the most secret areas of Bletchley Park. It is where the deciphered messages were translated and analysed.

​Gordon Welchman headed the team at HUT 6 which was responsible for the German Army and Airforce cyphers.

​HUT 8 was responsible for cracking German Naval codes. German U-boats worked in the Atlantic, destroying allied ships which supplied Great Britain with food during the war, so this was a crucial part of the war effort. Alan Turing headed HUT 8 and developed a technique referred to as BANBURISMUS which helped crack the Naval Enigma Cypher which saw the development of TURINGERY, a manual codebreaking technique that was later used to break the Lorenz Cypher. 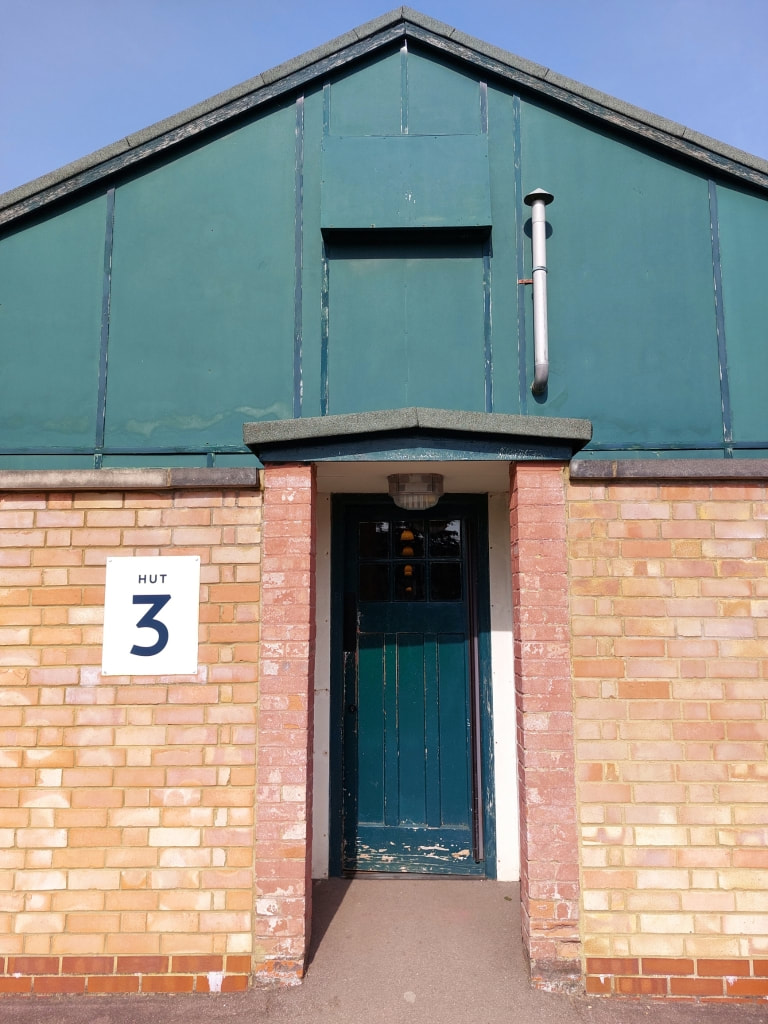 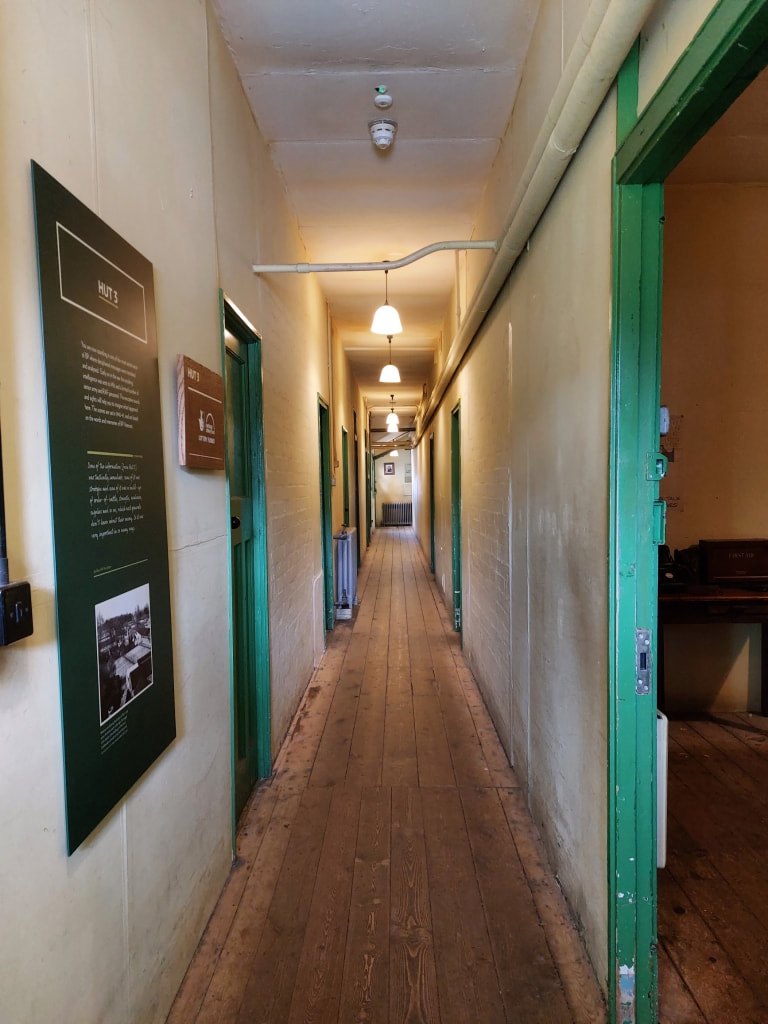 ​Colossus was a set of computers designed by Thomas Flowers (assisted by many others) at Bletchley Park between 1943 and 1945 and helped to break the Lorenz Cipher.

The Colossus is regarded as the world's first programmable, electronic, digital computer. 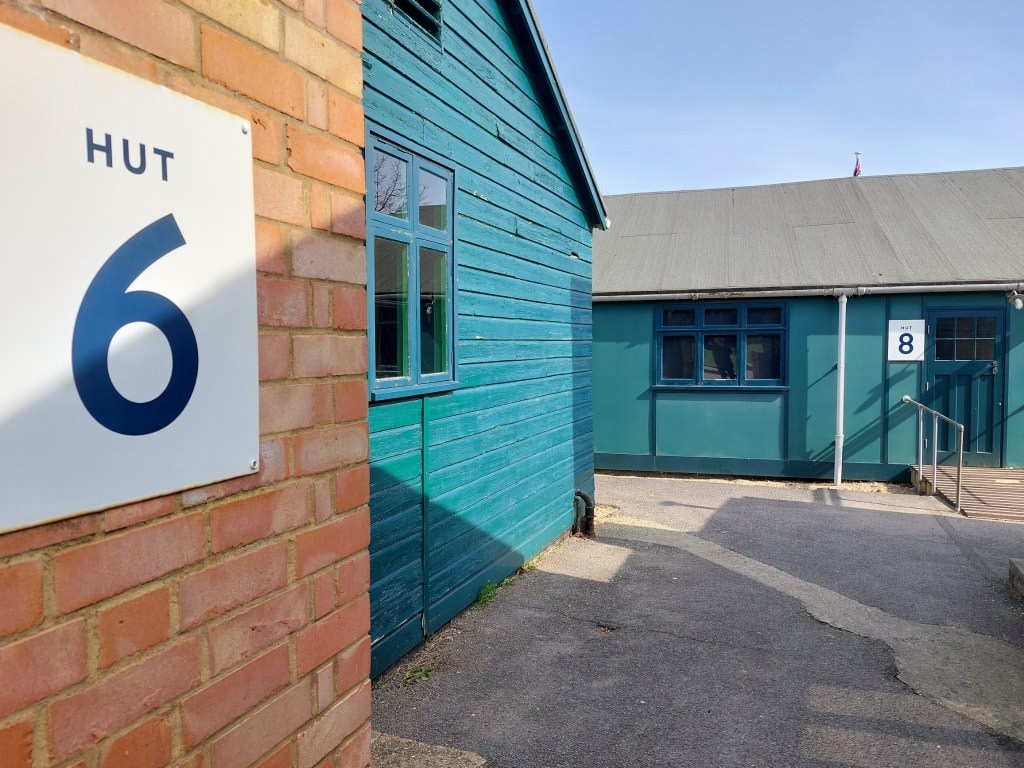 The first step in the codebreaking process was to get hold of enemy messages. The main way to communicate during WWII was with Morse Code. Britain set up listening stations known as Y Stations to listen to the enemy's messages, which were copied down and sent to Bletchley.

The second step was the most difficult. Messages arriving at Bletchley Park had to be deciphered. Basic cyphers could be broken by hand but machine cyphers were more complicated and to work through the billions of settings, machines were invented to speed up the process.

Once the days' settings had been worked out, the encrypted messages were entered into a Typex Machine and the deciphered message came out.

Translators had to turn the messages into English and then everything was cross-referenced to create a bigger picture of what was going on and the results were seen by others at Bletchley Park who were not doing the actual codebreaking and thus analysed into intelligence reports and this was passed on to MI6.

​Once the messages were cracked, the information known as 'intelligence', codenamed ULTRA was dispatched by riders on Norton WD16H 500cc Single cylinder motorcycles to 'WINDY RIDGE,'  a wireless station in Whaddon Hall, 5 miles from Bletchley Park and the messages were relayed to MI6 agents and military commanders on the frontline. 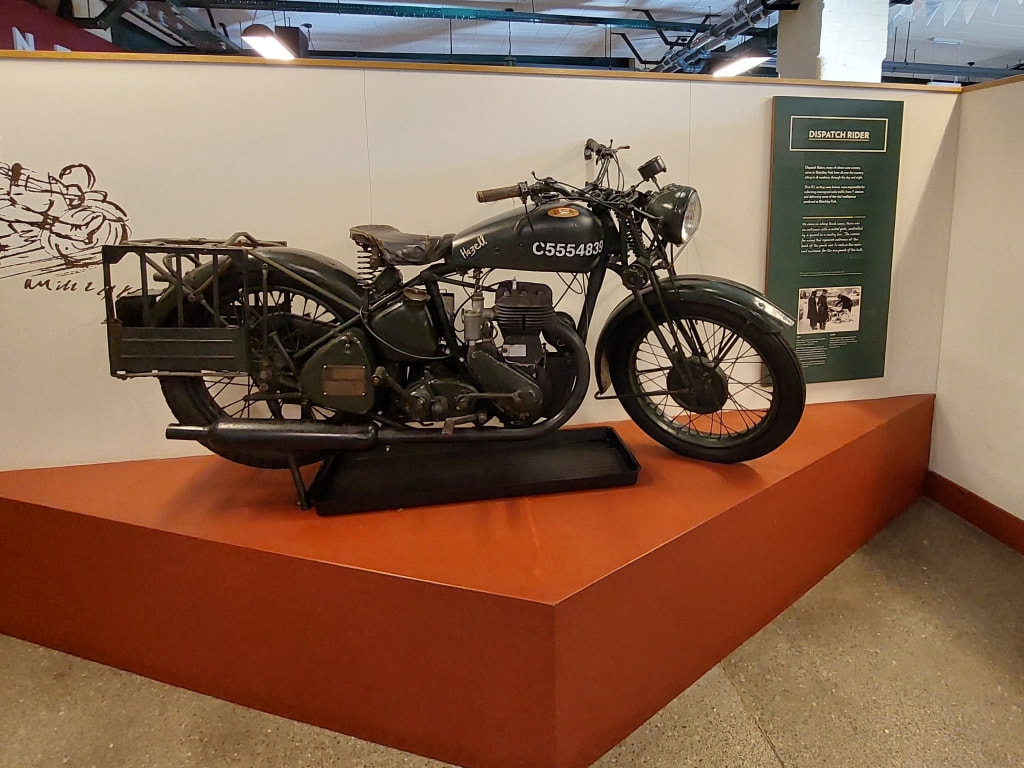 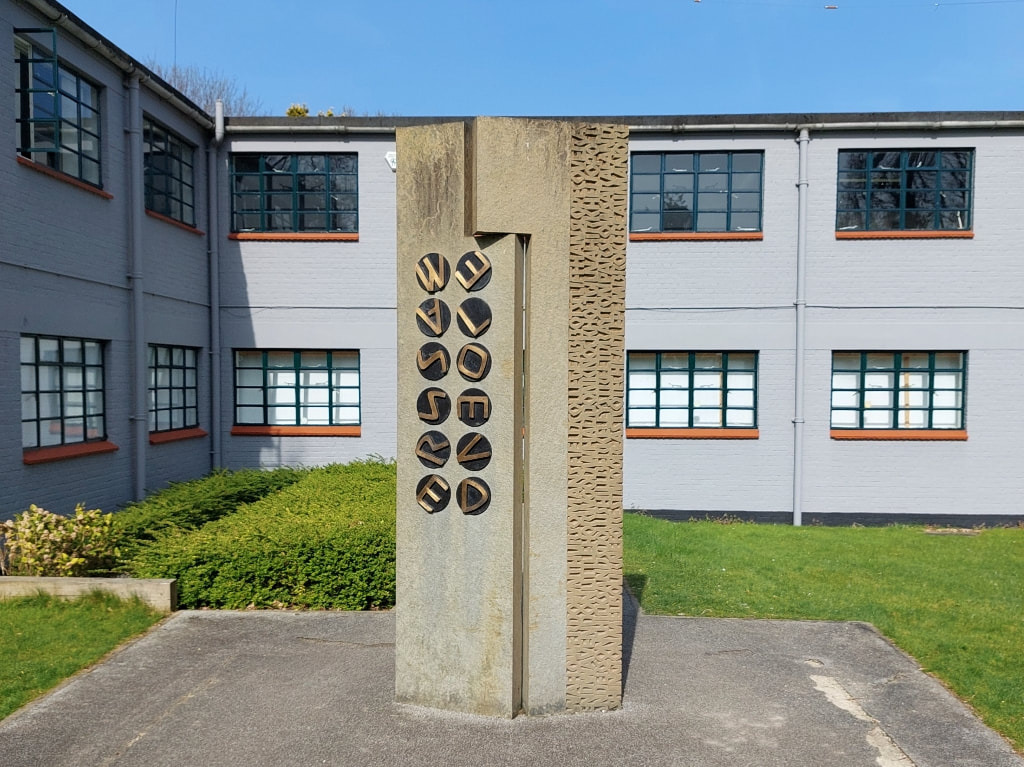