Connect on Twitter
The Zona Arqueológica de Tula in Hidalgo State makes a great one day trip from Mexico City. Despite being overshadowed by Teotihuacán, Tula is well worth the effort. 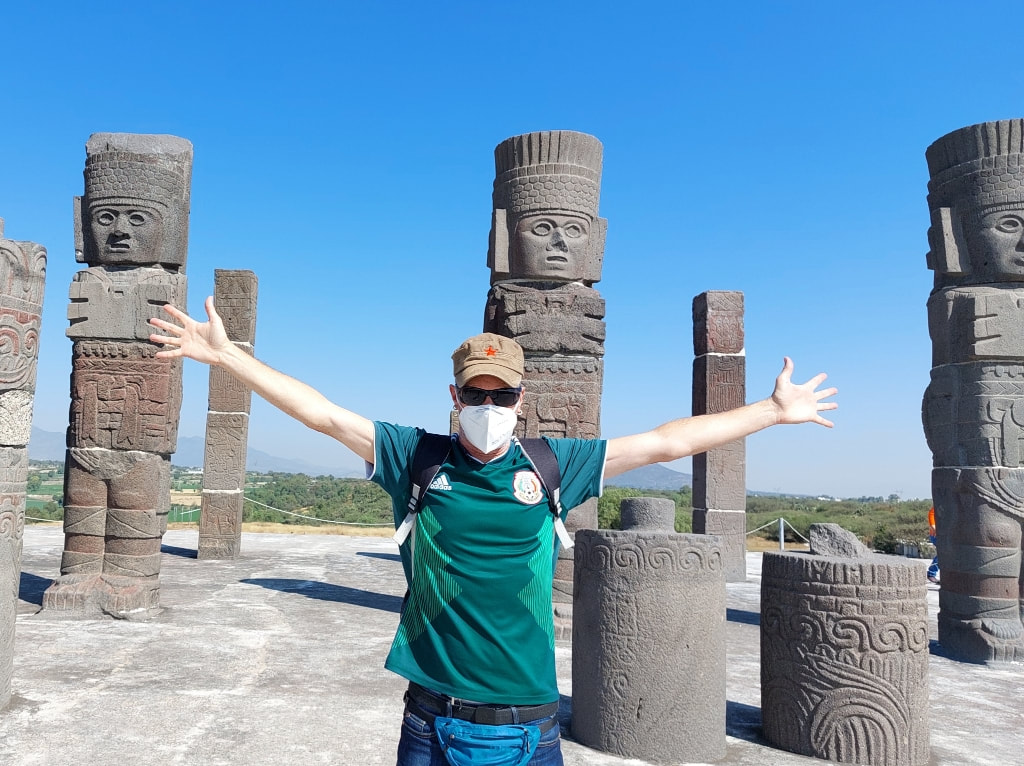 We had been wanting to visit the Zona Arqueológica de Tula for some time. It had been closed since the start of the pandemic. It is in the State of Hidalgo, which for me is my 10th state here in Mexico.
​
Tula was one of the most important cities of Ancient Mexico and reached its height as the capital of the Toltec Empire.

It was inhabited for over 4 centuries. In the year 1000 A.D. it was a metropolis with tens of thousands of inhabitants, spread out over almost 16km². 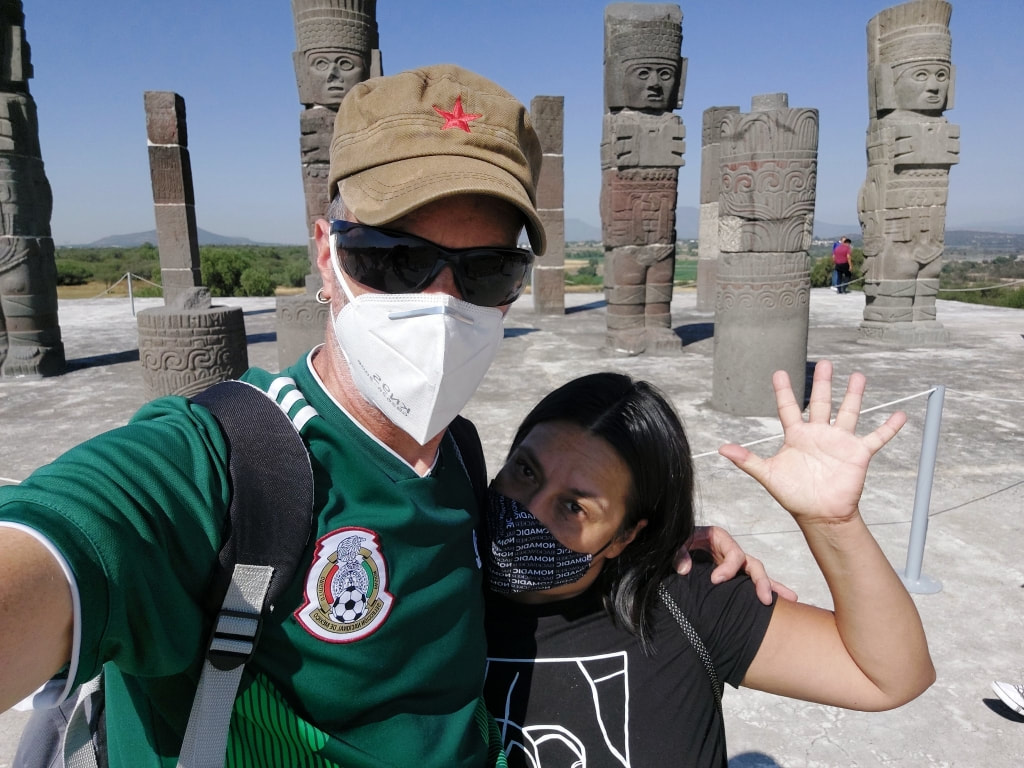 'The large main plaza with enormous platforms, stairways altars, halls, palaces and ball courts were located at the highest points of the city, thus dominating it. It was the city's religious, political and administrative centre. Its two massive pyramids, visible from almost anywhere in the city, were adorned with sculptures and countless polychrome bas-reliefs'. Source: info plaque at the site 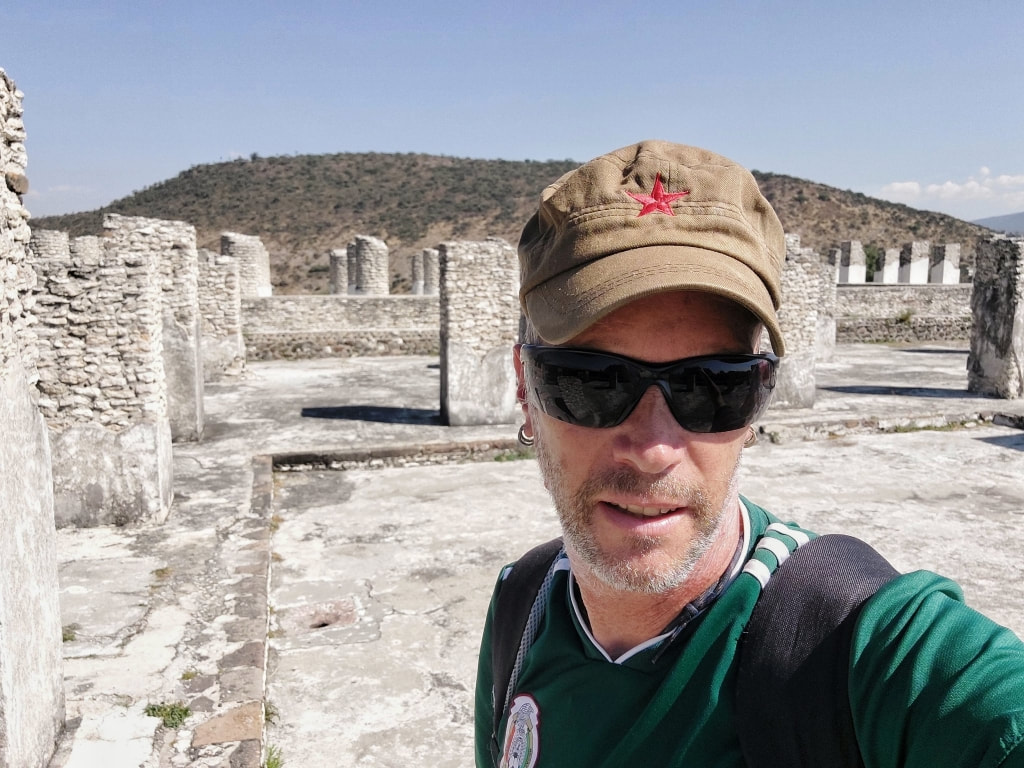 'This was one of the city's most important sacred buildings, probably a royal sanctuary to which only the king and high priests were likely to have had access.

The enormous columns in the form of human figures, known as 'atlantes', representing high-ranking Toltec warriors can be seen on the top of the pyramid.

The giant stone sculptures held up the roof situated on top of the pyramid'. Source: info plaque at the site 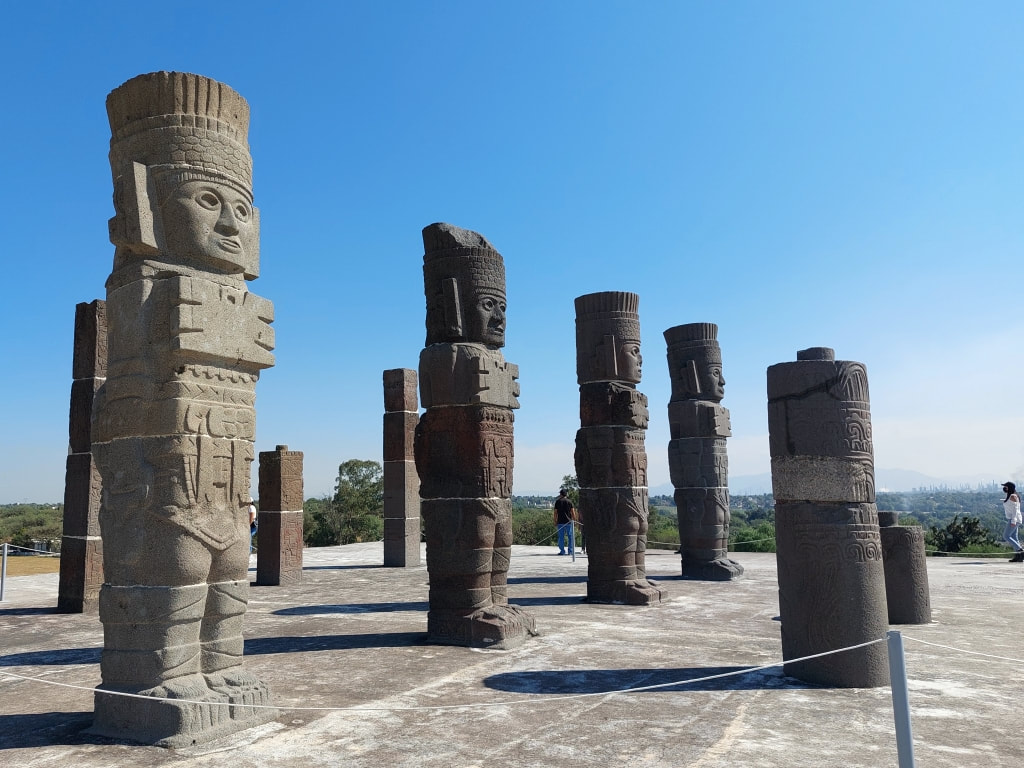 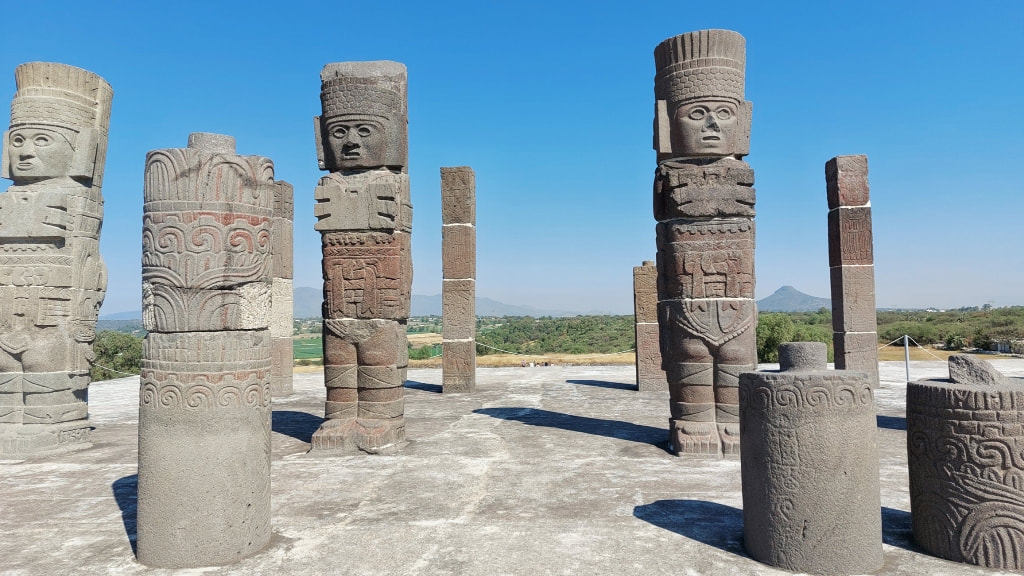 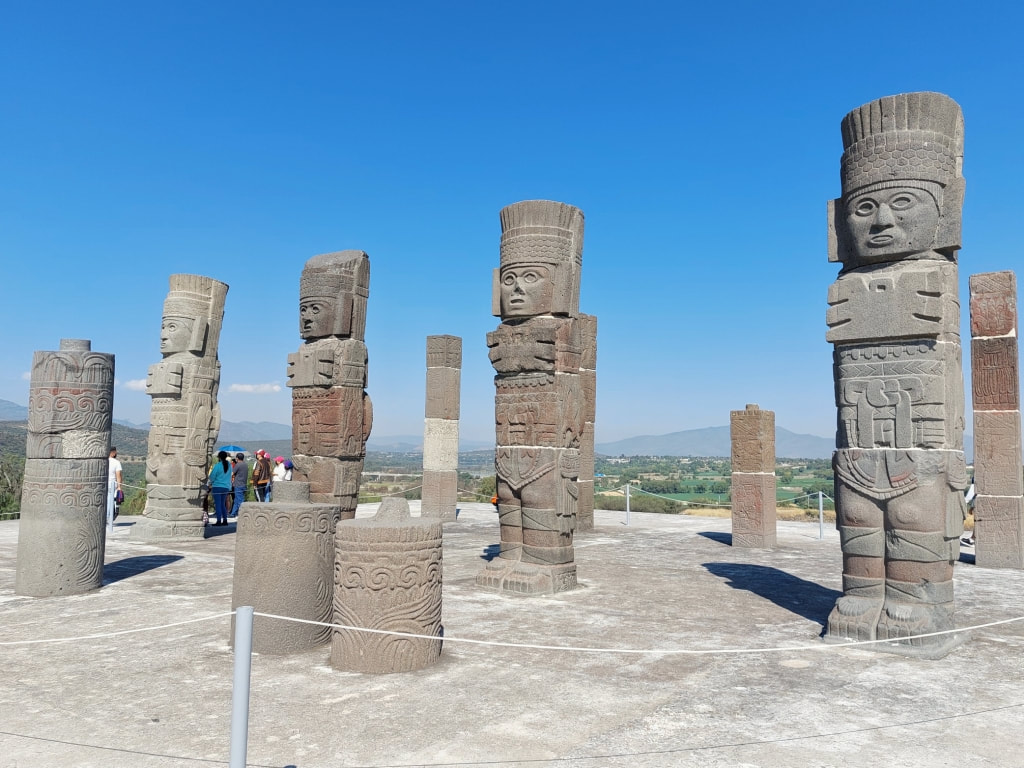 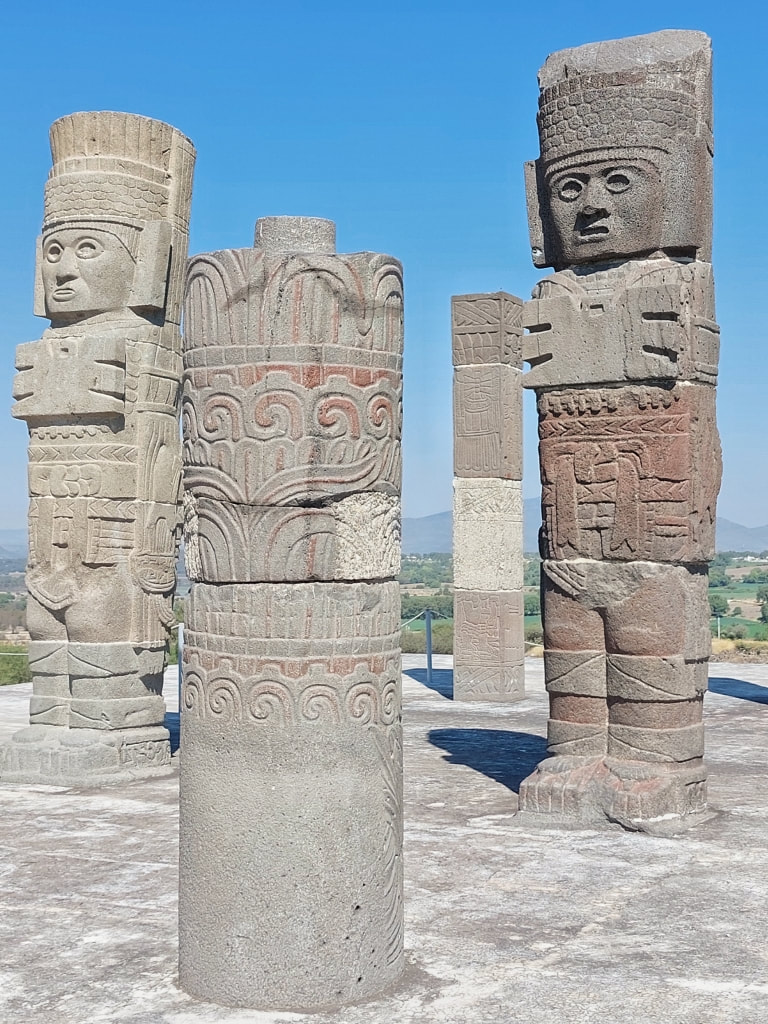 The El Palacio Quemado:
'This impressive architectural complex was made up of 3 grand halls with numerous columns and benches set into the walls. Ceremonies were probably held here in which the king and the ruling elite participated.' Source: info plaque at the site 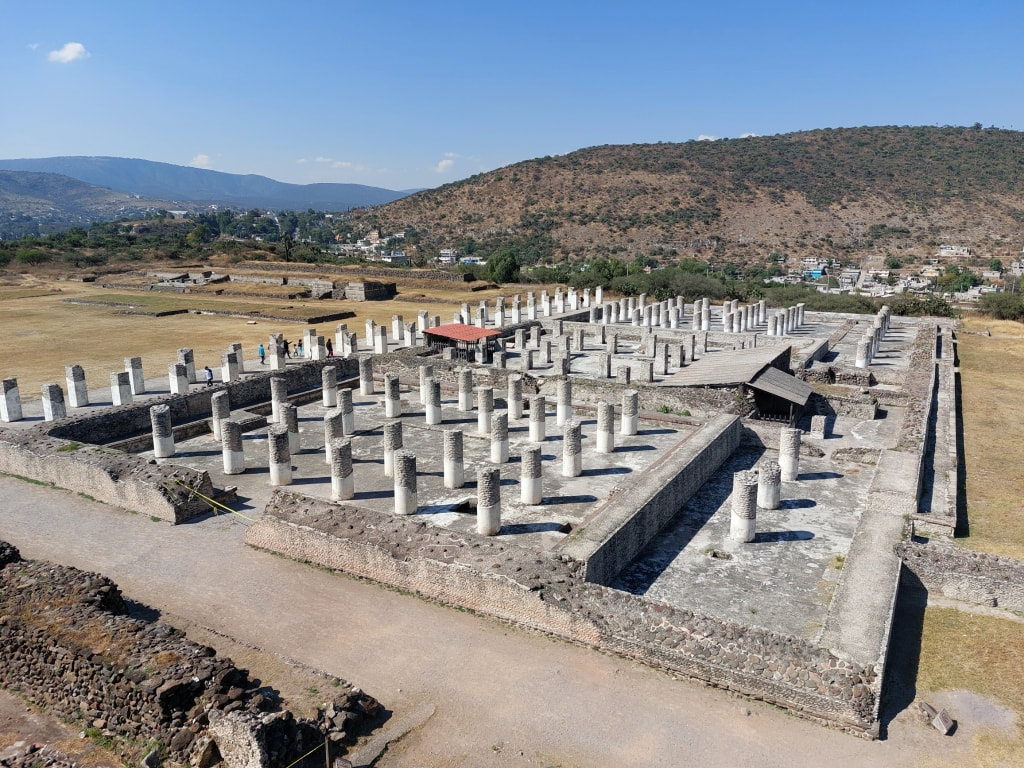 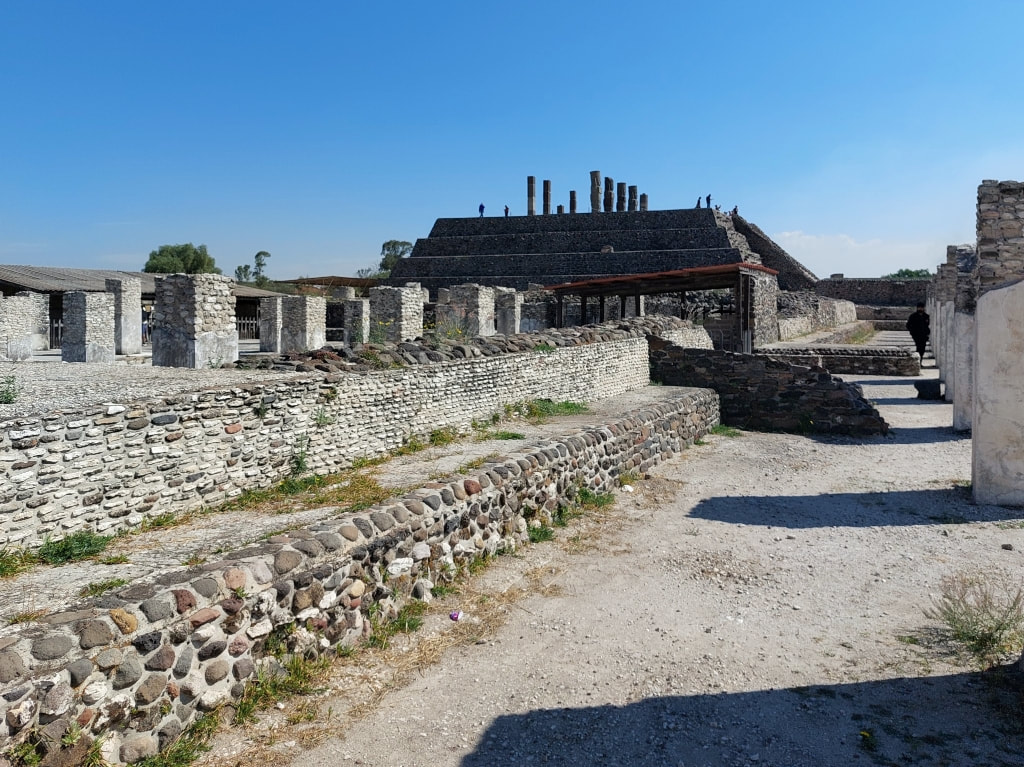 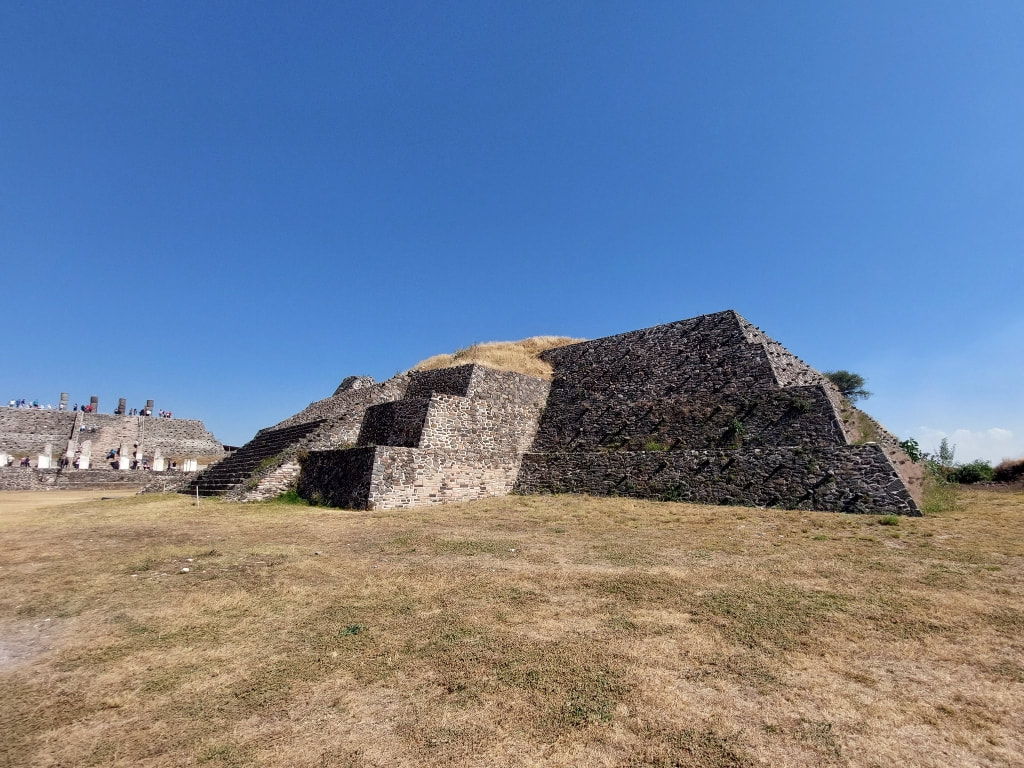 This is the smallest of the ball courts excavated at the Zona Arqueológica de Tula. A warrior found here was dressed in garments characteristic of the rain God Tlaloc. 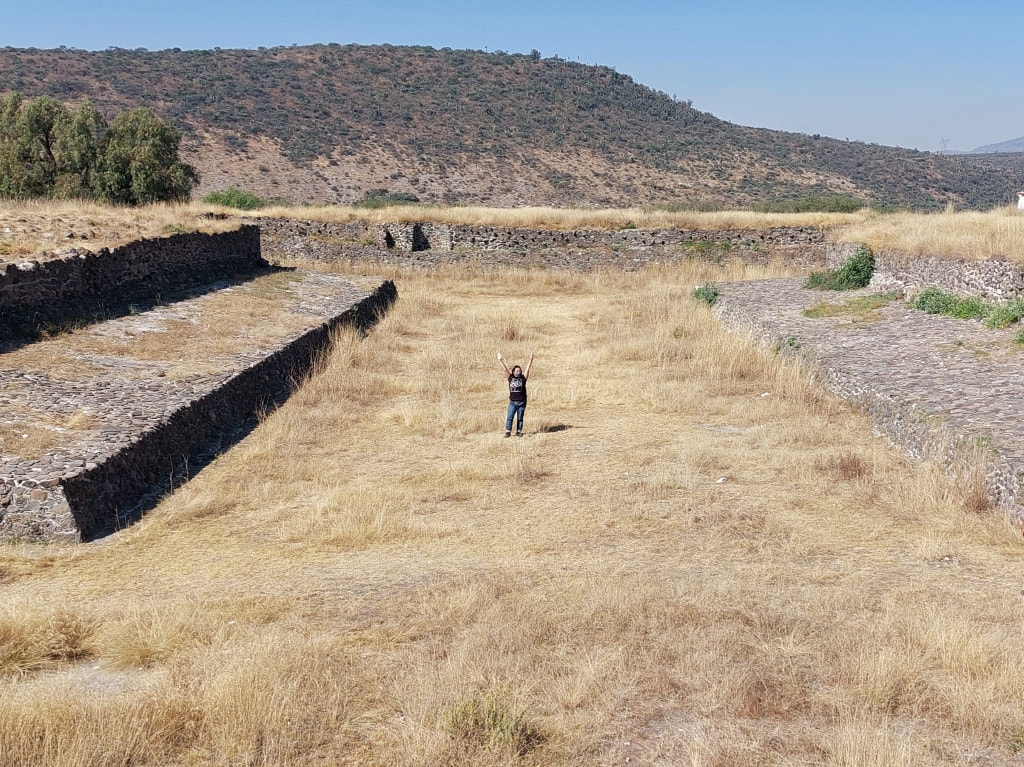 Panorama from the main plaza: 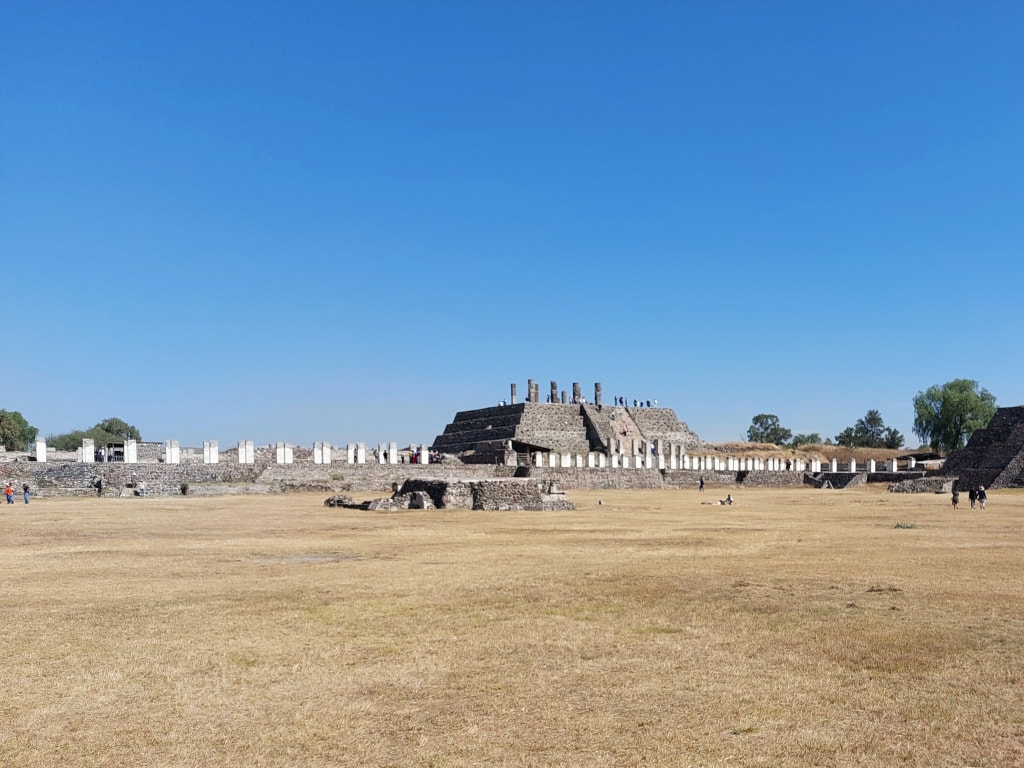 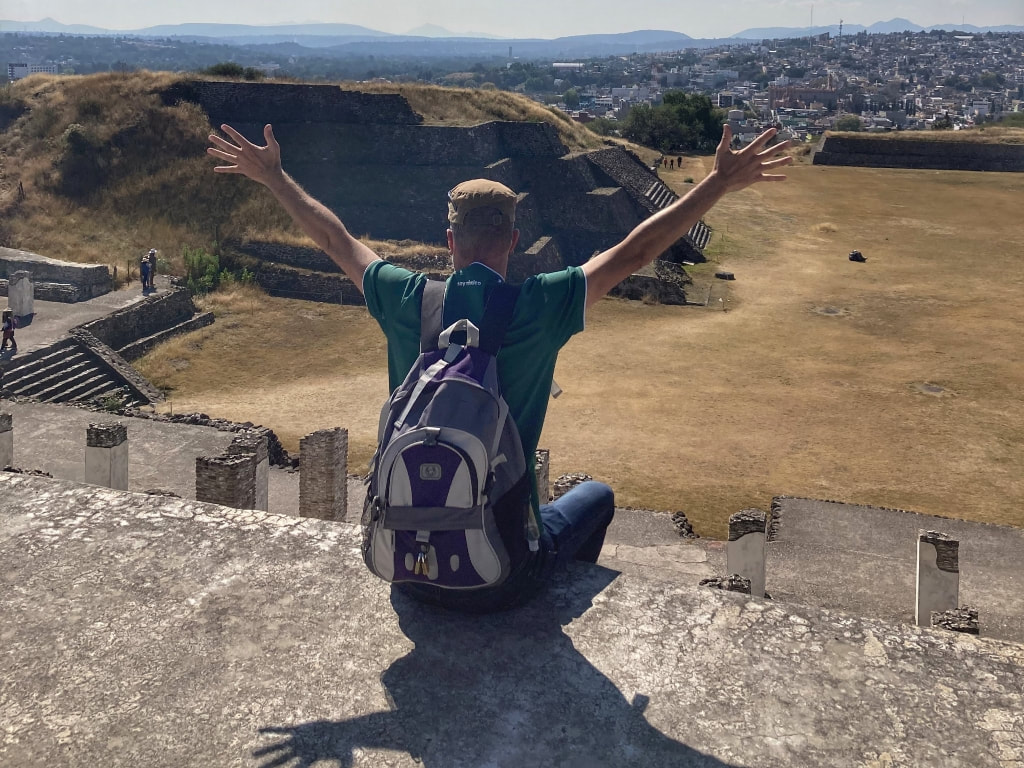 From the site entrance to the archaeological site, you walk through some beautiful gardens with many cactus plants.

​This is the Agave Azul, one of many they use to make tequila: 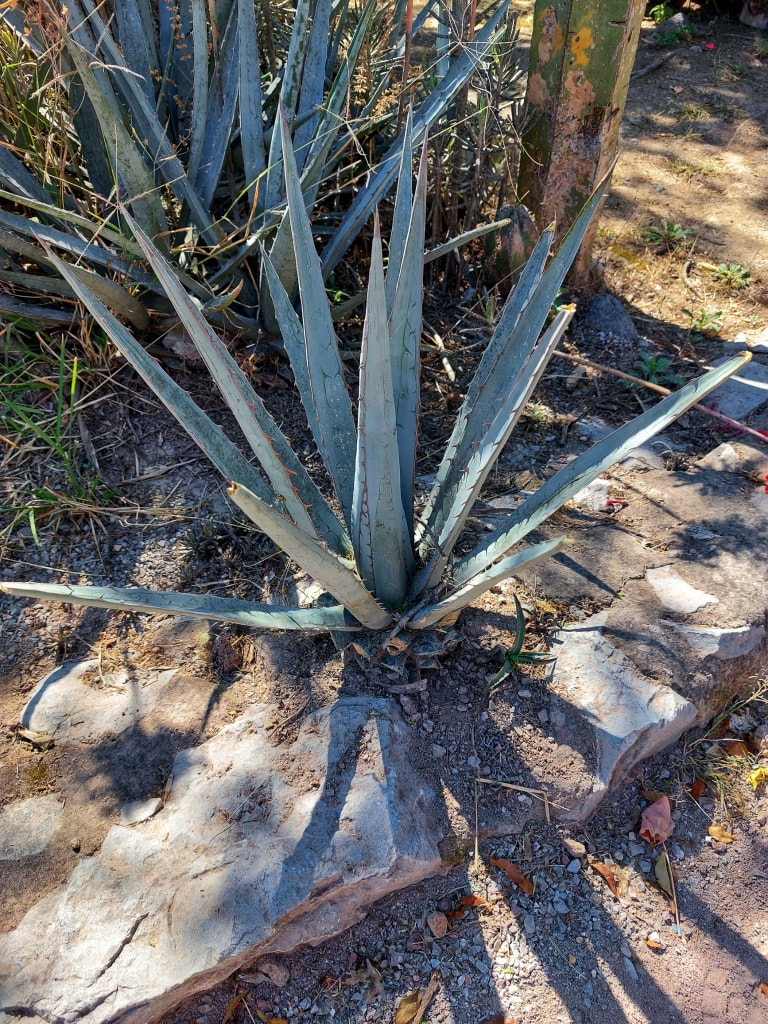 And the Maguey Pulquero used to make pulque: 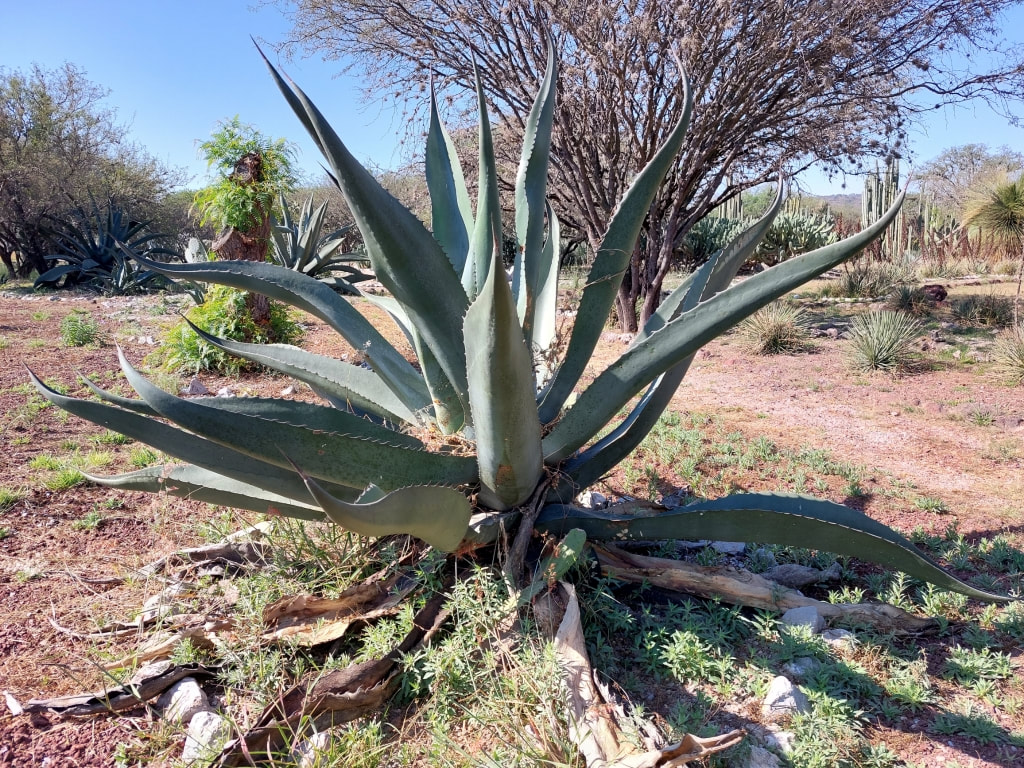 And the Sábila used to make aloe vera: 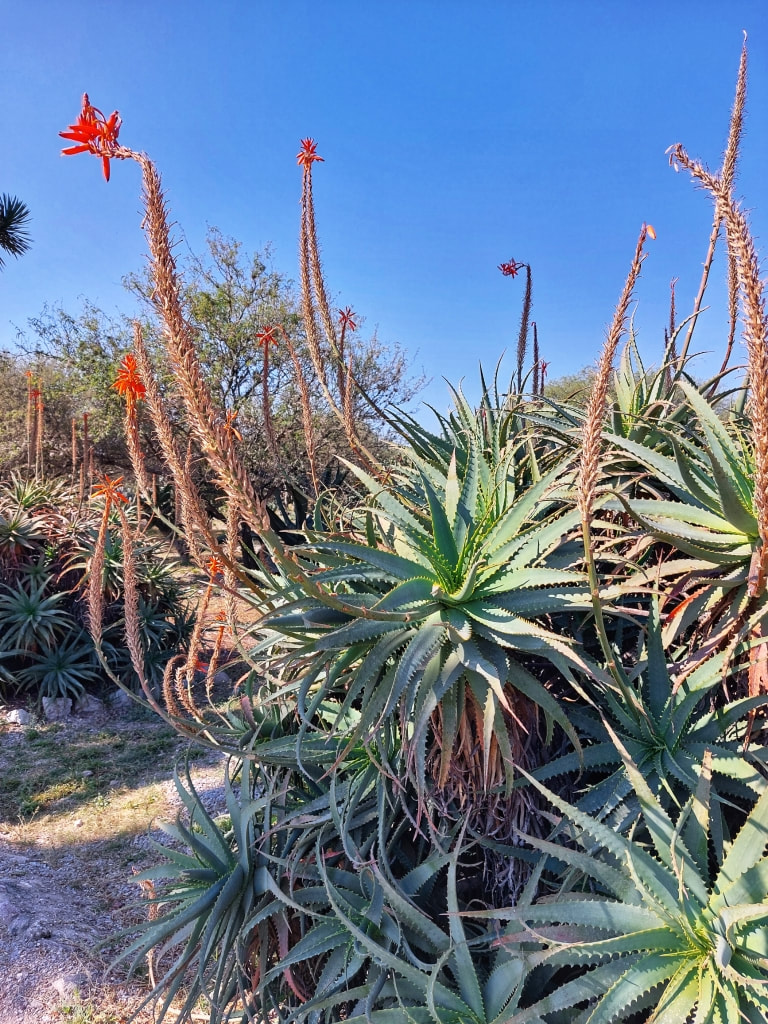 After backpacking the archaeological site, we went and backpacked the small town of Tula. Not very inspiring actually, but you can go and look at the old railway station or the quite dull cathedral. Or pose in front of the Letras TULA: 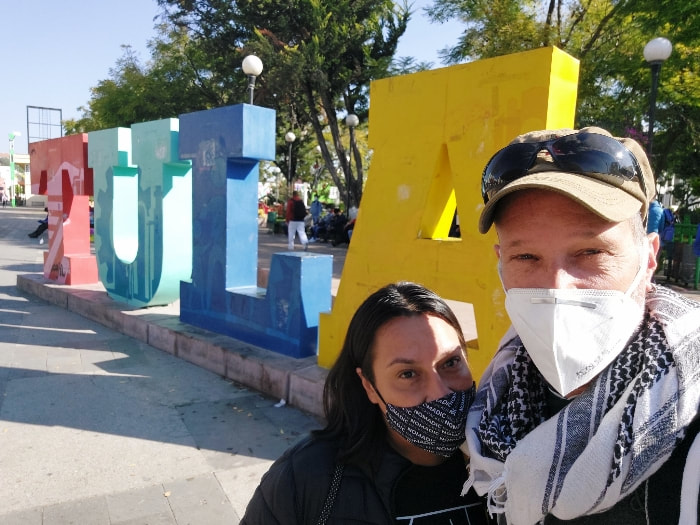 How to get to Tula from Mexico City

Tula is just 90km from Mexico City. We travelled by Ovnibus from the Central de Autobuses del Norte (use the Metro stop "Autobuses del Norte" on Linea #5). It's the same station used for getting to Teotihuacán.

We checked the schedule on 'clickbus' and just turned up at the bus station and bought the tickets. The current price is 161 MXN one way. The buses go hourly or half-hourly depending on the time of day.

We left home at 7 am and it took 45 minutes riding the metro and we had plenty of time to buy the tickets and some breakfast for the journey without the stress.

We were thankful that unlike all of our other day trips, we encountered no traffic problems. So we arrived on schedule at 10 am in Tula. 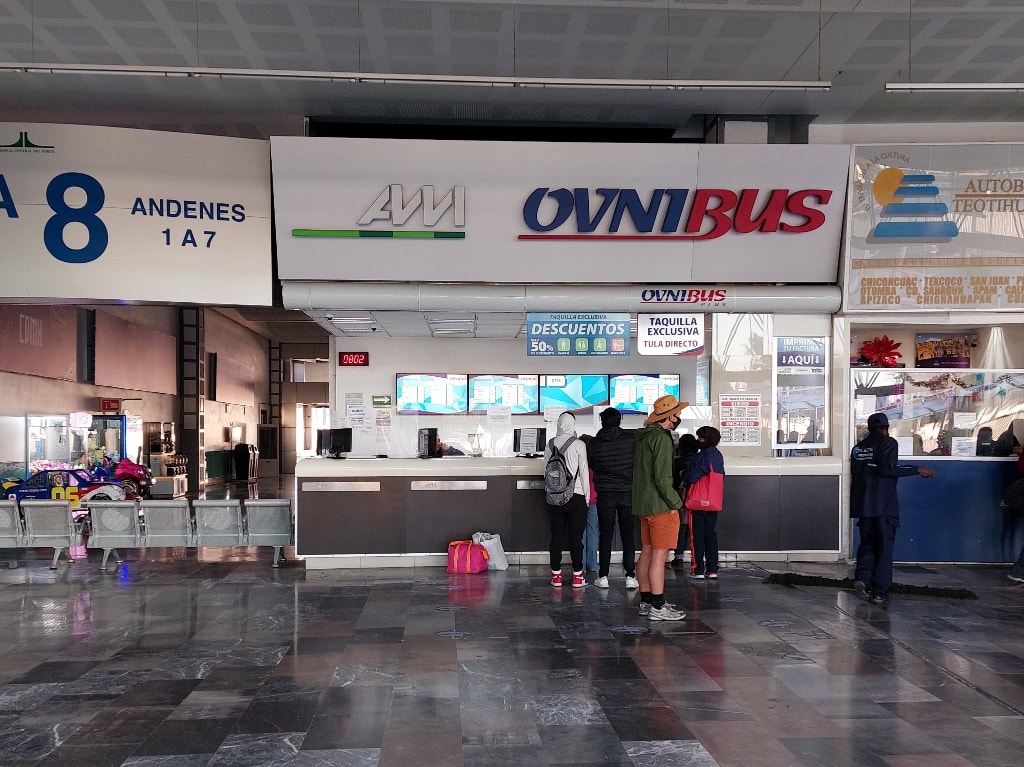 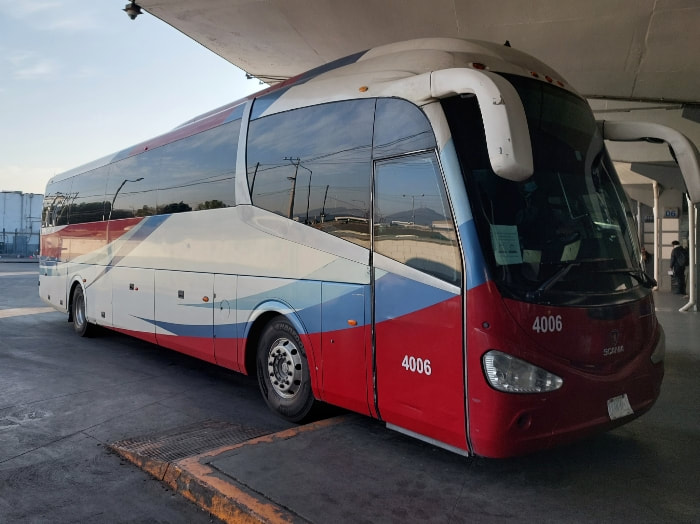 Getting to the ​Zona Arqueológica de Tula from Tula bus station

It's about a 50-minute walk to the 'entrada principal', which is the only entrance in use right now (January 2022). On the map below, you'll be coming in from the east/right side: 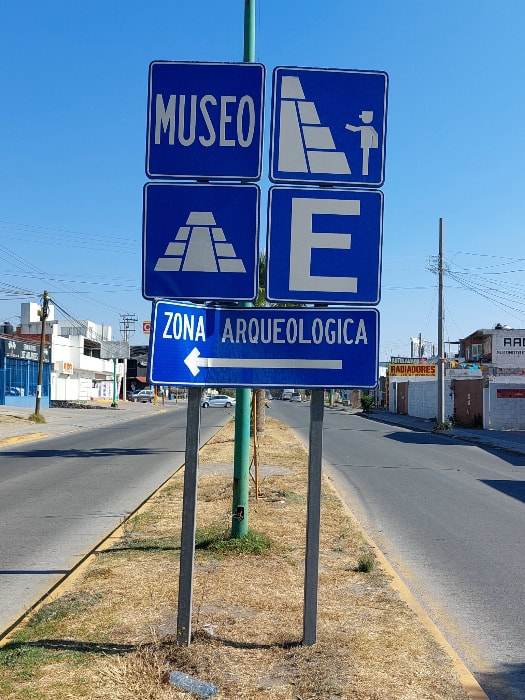 The site had been closed since the beginning of the pandemic, only reopening in December 2021.

Entrance fees are 85 MXN, not the 75 as advertised. Mexican residents can enter for free on Sundays. The site is currently open (January 2022) from 10 am until 2 pm, Tuesday to Sunday. The site is quite small but we were there for about 2 hours. The museum and cafeteria are still closed. Take something to drink and wear a hat, there is minimal shade.