Tepito - The most dangerous barrio in Mexico City

February 24 2021 | Tagged: Mexico | Property of Nomadic Backpacker
Visiting El Barrio de Tepito, said to be the most dangerous neighbourhood in Mexico City. So how dangerous is it? Let's go and find out. 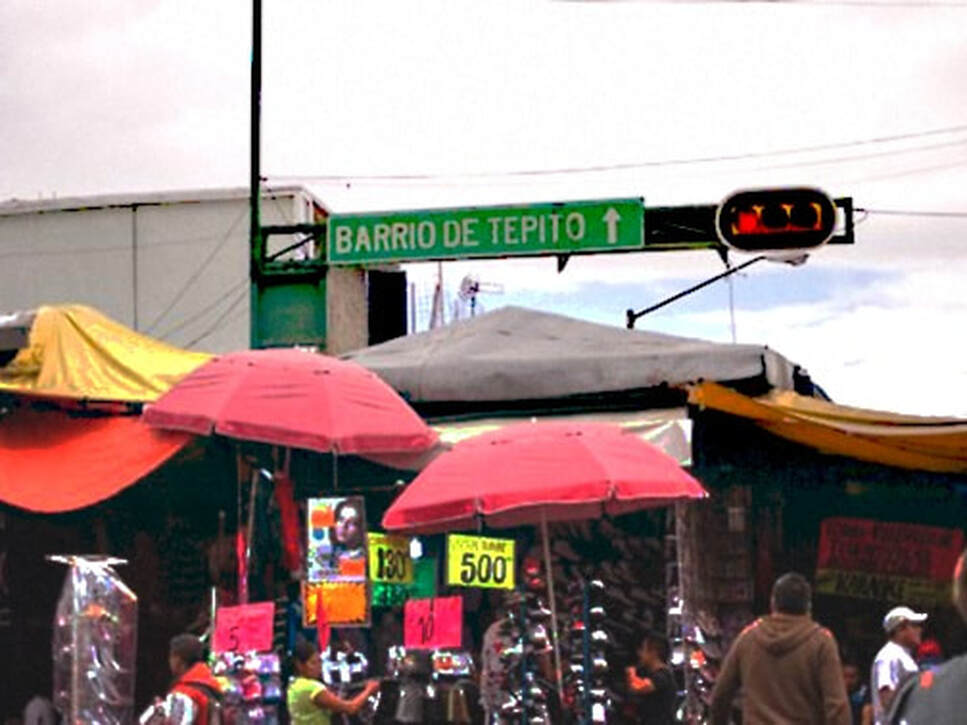 ​I visited El Barrio de Tepito, said to be the most dangerous Barrio in Mexico City


Just for the record, I did not go alone.

#justsaying: hate those who say they went anywhere alone, prefering to forget their tour guide or other small entourage ("Oh you were so brave"), just to boost their social media standing.

But neither did I hire any bodyguards. I went with my native of Mexico City for 40 years, lover. She is hardly intimidating but she is street-wise.

El Barrio de Tepito is a neighbourhood just a few blocks north of the very touristy Zocalo in CDMX (Mexico City). Tepito is not just the market for which it is also famous. It has a long history of shoe making and boxing too.

One theory is that the name Tepito comes from when the police started to use whistles and when they began their rounds, they would tell their colleagues, "Si veo a un ratero te pito" (If I see a thief, I'll whistle at you). Pito means whistle.

Tepito was given the name Barrio Bravo or Fierce Neighbourhood. It is widely stated that this name was given due to its reputation as being dangerous. This is not true.

Tepito has always been a place for the poor and a high degree of poverty and police have always liked to try and intimidate people who live in such environments but the inhabitants of Tepito were never afraid to fight back. Hence the name. Not for the barrio being dangerous per se. 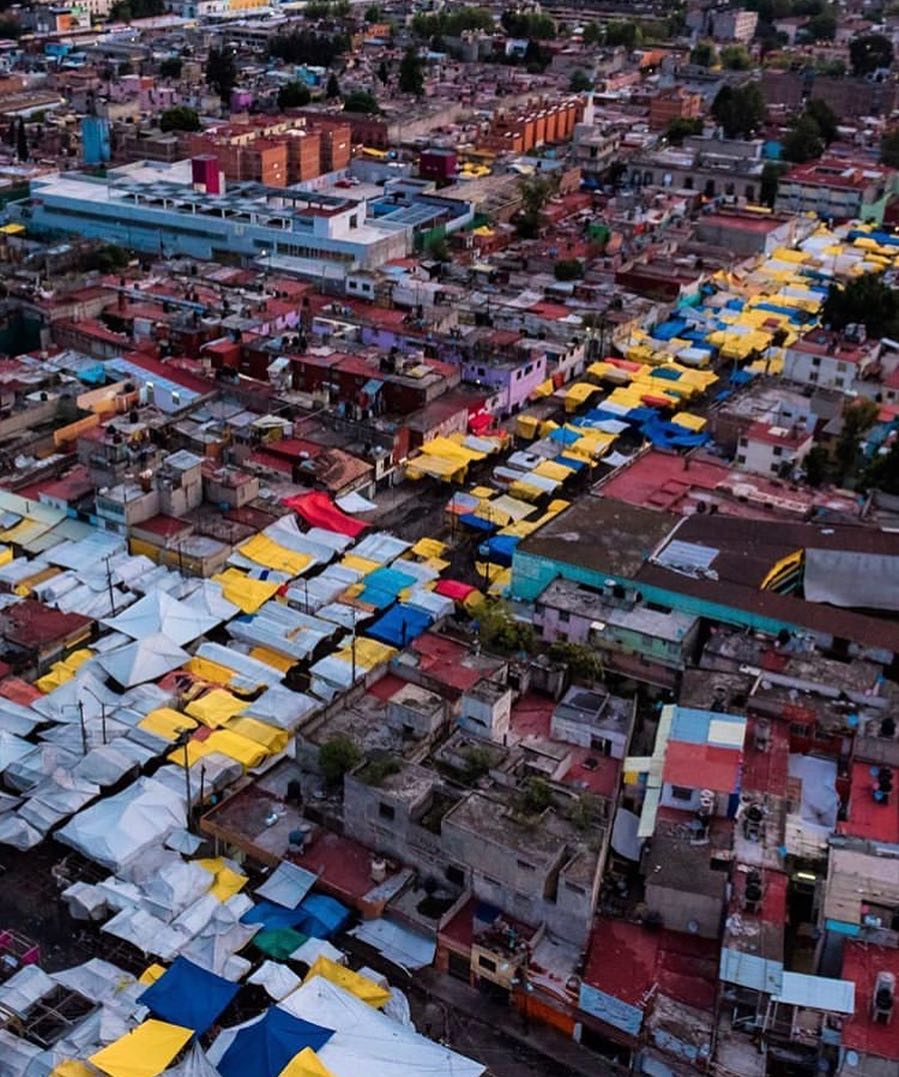 So off we went to the Barrio Bravo on a regular Saturday during Covid-19, February 2021.

We carried an ancient iPhone3, which I stuffed in the front pocket of my jeans, just in case there was an opportunity to take a couple of photos. There wasn't.

​*The 2 images on this post are free stock photos

We had 1 small bag between us which Miss CDMX carried on her front with just a water bottle. We had a small amount of cash, less than 20US$ between us in our jeans' pockets, 1, almost empty metro card and a small bottle of sanitiser which I temptingly had in my back pocket of my jeans (more on this later).

Exiting the Tepito metro station, we plunged straight into the markets.

They say that in Tepito, “todo se vende menos la dignidad”. "everything is sold except dignity" (Grisales 2003: 1).

Tepito has long been known as a place that traded in stolen goods. And in the 1970s, the trade in counterfeit goods and illegally imported products known as fayuca began.

Sellers would cross the border to the US, buy or simply obtain, almost impossibly hard to get items and sell them in Tepito.

And since American items can now be easily obtained they switched to importing counterfeit products from China, much of which is stolen before the import duty has had a chance to pay thus costing the Mexican economy a lot of unpaid taxes. 70% of the counterfeit items in Mexico pass though Tepito.

It was also a place to buy pirated audio and video. This used to be produced in the neighbourhood itself in the "La Fortaleza", tenement blocks with hidden rooms and tunnels which were also falsely reported of having been pulled down.

In the 1985 Mexican earthquake, Tepito saw an influx of outsiders. It was no longer just a 'family' of Tepito born and bred residents.

The smuggling mafia knew that by giving stolen merchandise to the people of Tepito, they were going to be able to sell it because they already knew how to sell stolen items without the police interfering with them.

As we walked, we saw boxes and boxes of sports shoes being pushed through the streets on trollies known as diablos. We saw items set out on blankets. Just like any other street market.

Tepito is a hot-spot for theft. Robbery just like in Rome where assailants drive past on mopeds is common or like the pickpockets that roam the Tube in London.

Dangerous? Not really. It's just a very crowded place and these things will occur in any similar place.
Mexicans are very friendly. Here is no exception but you do not get involved in anything that's not your business and of course, you don't come here for your night out.

We were strolling. Suddenly there was a guy behind me, 'forced' to move in close as a car was passing, my pockets being frisked before he casually appeared to be making a simple purchase at a stall just in front of us.

I have done that too in other crowded markets. A folded piece of paper with just some notes, shoved into my back pocket.

Tepito is famous for what you don't see in regular markets.

On every street corner, men, old and young on walkie-talkies.

Police do patrol the markets and their positions are constantly being relayed.

The trade of imported, counterfeit and stolen goods is just a front for what you don't see, for what is hidden out of sight.

The cartels control life inside Mexico. This is nothing new. What is hidden inside the barrio, out of sight from regular people who come to the tianguis to buy a pair of knocked-off Converse, is the harder stuff. Guns, ammo, drugs and people trafficking.

I was a newbie at a place with such goings-on. My lover would squeeze my hand, once for 'something' on the left and twice for 'something on the right'. For me, it wasn't always easy to spot. Money being exchanged, 'fees' and 'protection money' being collected.

We'd hear the static of incoming messages on the walkie-talkies that the police were on the next corner and those selling items literally on the street would hurriedly pick up their stock on their blankets by cleverly placed loops at each corner and hustle out of sight.

Undercover cops have infiltrated the gangs. They know this and we were undoubtedly being watched. With my pale skin, I stick out like a sore thumb in Africa but here, someone who doesn't belong might as well have a hat on with a flashing red light on it.

But we were just looking. We weren't talking with anyone, we didn't even buy a soda. We weren't shooting photos or videos.

#justsaying vloggers who come here to famously say that they didn't get lynched whilst visiting the most dangerous barrio in Mexico alone undoubtedly didn't visit alone.

Tepito is not a game. You cannot gaily wander in and start shooting off video where the hell you please.
You get permission and you are escorted. You film where they say you can film.

I saw one video. 20 minutes long where the vlogger is walking a few streets with his GoPro out in front and spends 95% of the time in one sport-shoe shop. I'd already clocked his minders.

We saw one seller being caught. His stock confiscated. A 'present' will be paid and the seller will be back on the street within a few days.
​
He was 'caught' to allow those with more to play for, to escape and to allow it to be seen that the police were doing something proactive. He was caught as he was a long way down on the chain of hierarchy. If he had paid a few more pesos or a few more years under his belt he wouldn't have been the chosen one to have his stock confiscated.

It is also widely known that these busts are all staged. That the arms and drugs are allowed to be seen to have been confiscated and a large payment will be made to the government in return for the top names avoiding being charged and no one being shot.

Well, yes I survived an afternoon in the most dangerous barrio in Mexico.