Visiting the City of Taxco in Guerrero State | Mexico

Connect on Twitter
A couple of weeks ago, me and Miss CDMX went and backpacked the city of Taxco, pronounced 'Tasco', in full: Taxco de Alarcón, in the state of Guerrero as a rather long day trip from Mexico City. 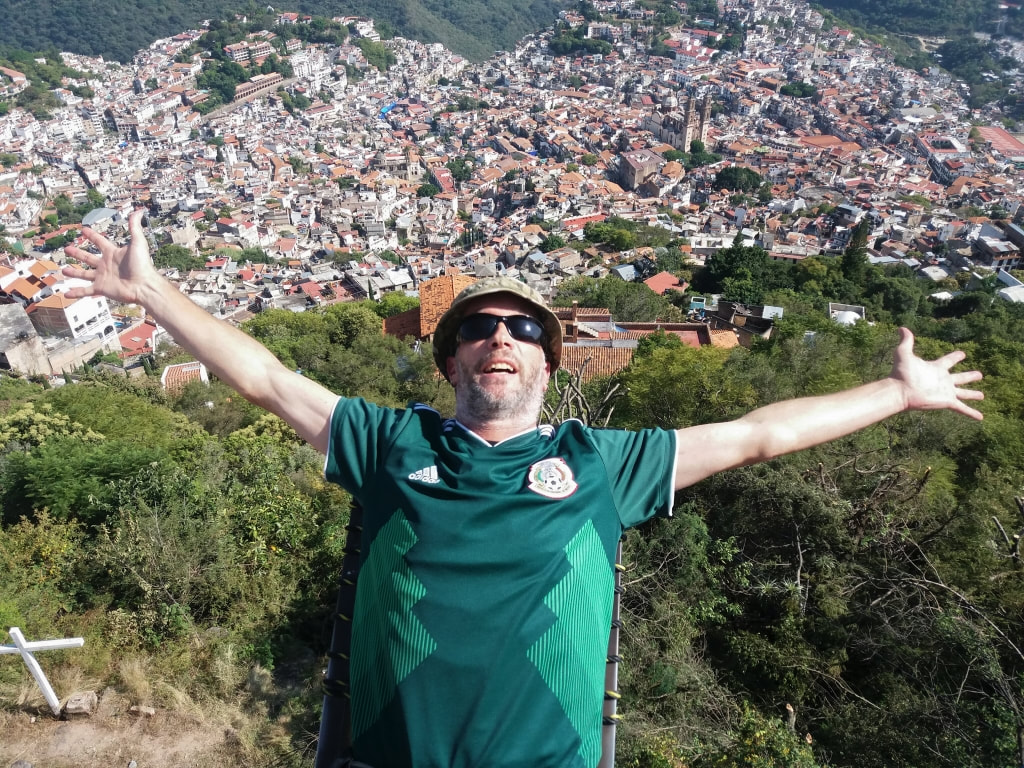 Backpacking in Taxco | Mexico
Instead of rushing around, with me, hell-bent on collecting notes for a blog post entitled, 15 top sights in Taxco, we took it all in at a more modest pace. Less is more, except when you are a blogger. I am joking. It was a great day!

I have detailed the logistics of getting there and away, from Mexico City at the end of this post, but in short, it was, just like when we went and backpacked Puebla, a rather long day.

Getting to the southern bus terminal, took us 40 minutes, the scheduled 2 hrs 30 bus ride took 3 and getting back took an insane 3 hrs 20 due to massive congestion on the road out of Taxco. And then we had another hour riding the metro back home.

Was it worth it? Undoubtedly so. After all, the state of Guerrero, is my 9th state out of 32 federal entities in Mexico (31 plus the capital, CDMX): Mexico City, Estado de México, Guerrero, Morelos, Puebla, Oaxaca, Chiapas, Campeche, Yucatán.

​So having arrived safely, we headed off to the Parroquia de Santa Prisca y San Sebastián, the Church of Santa Prisca, built between 1751 and 1758 on the order of José de la Borda which was for a time, the tallest building in Mexico.

We chose a café at random, avoiding the numerous persistent touts and sellers where we drank a beer, overlooking the Zócalo: 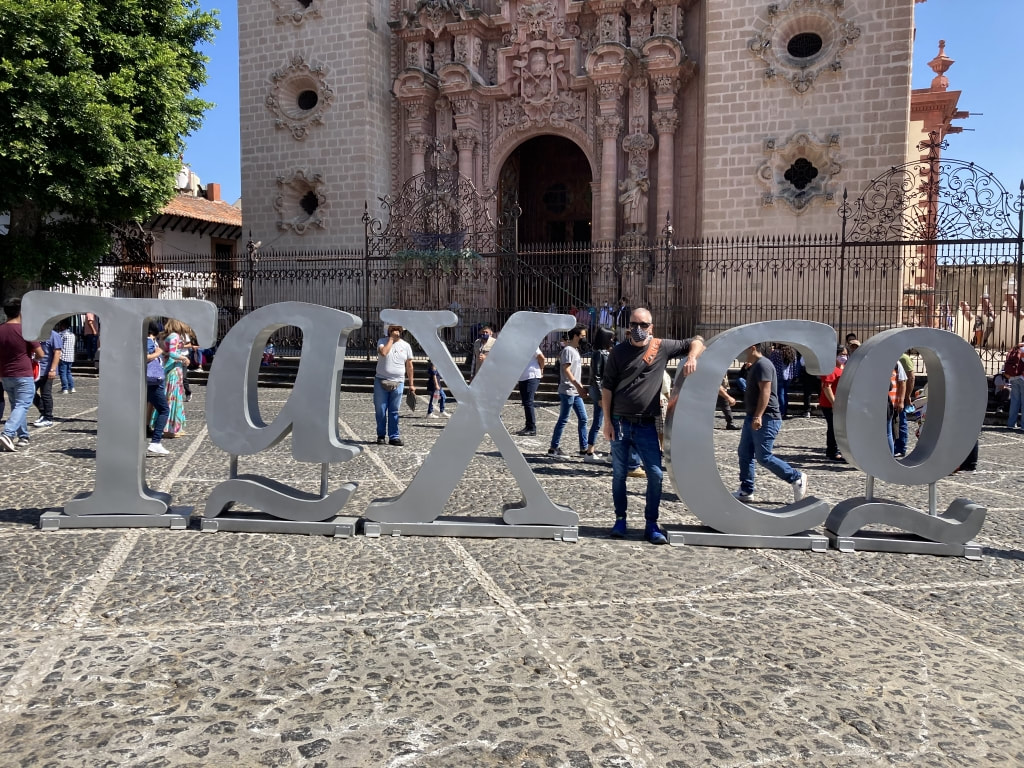 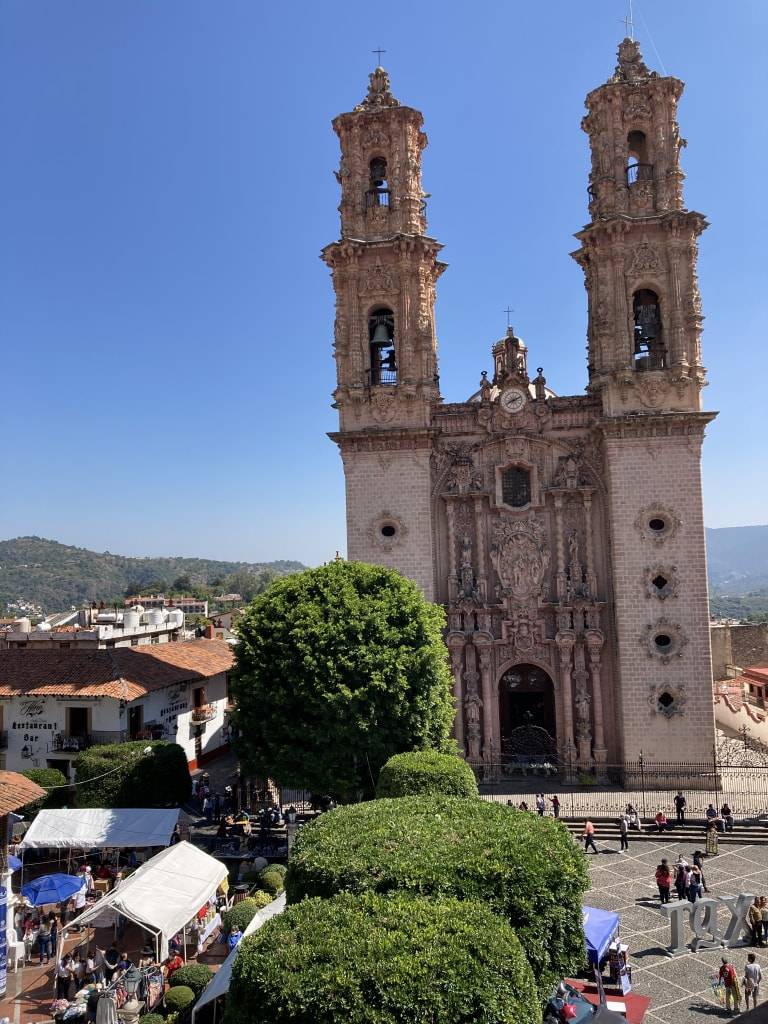 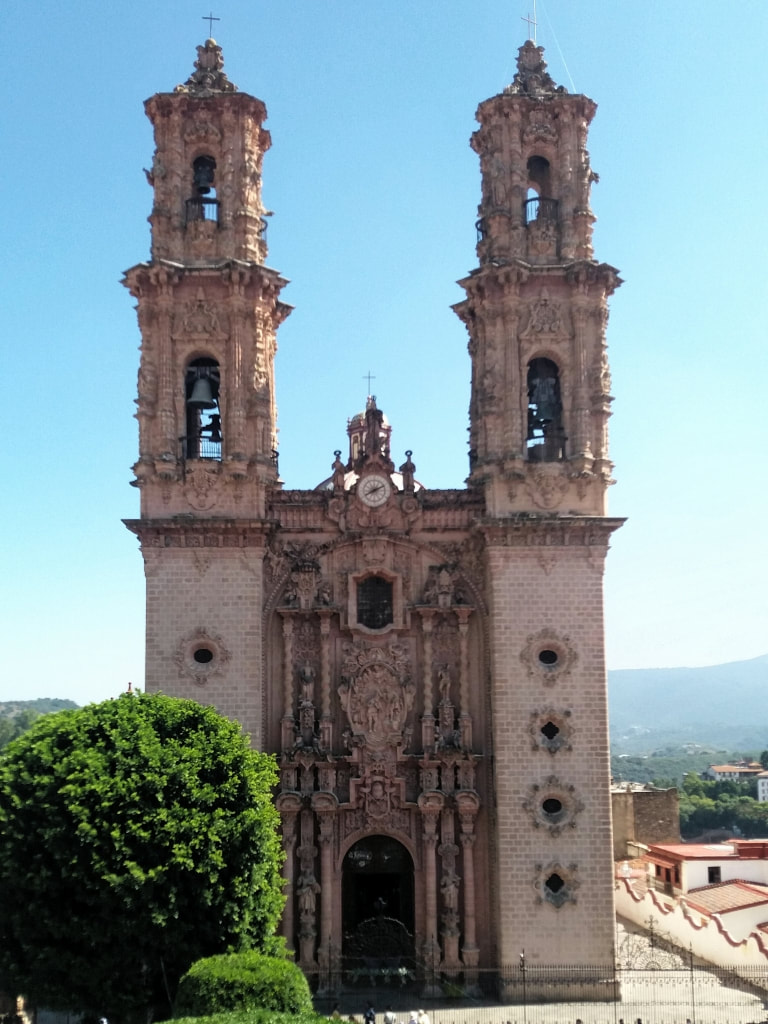 Then we walked up through the steep streets to the Cristo de Taxco on a hill overlooking the town: 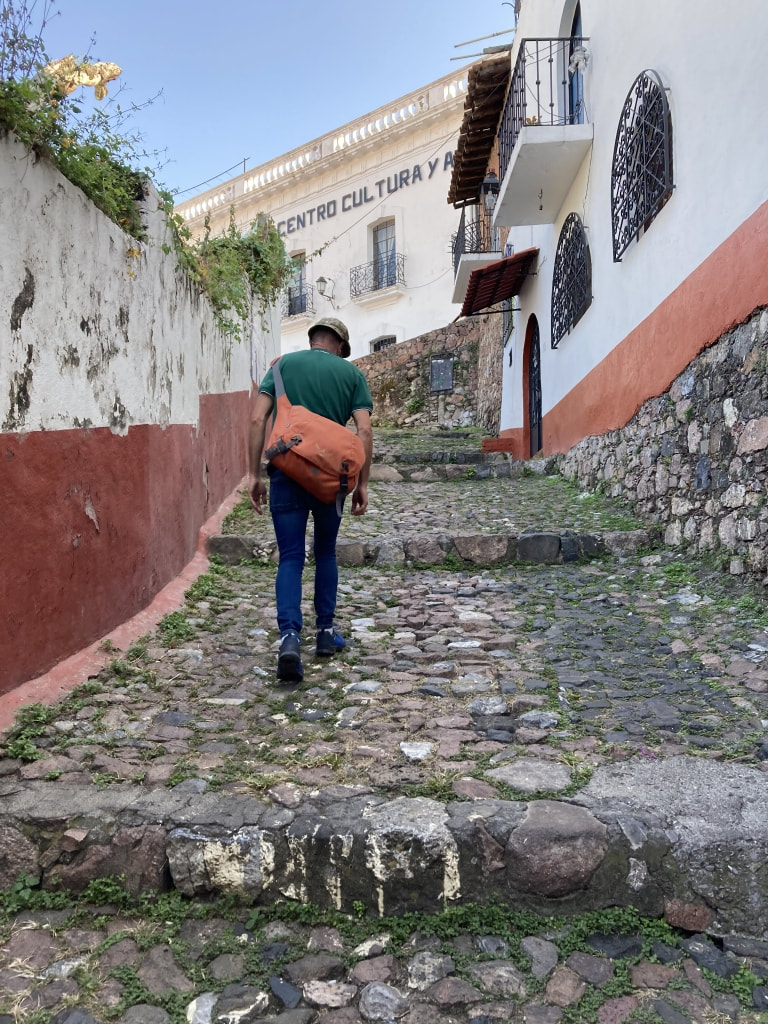 El Cristo Monumental de Taxco stands 18 meters high and it's rather like the El Cristo Redentor in Rio: 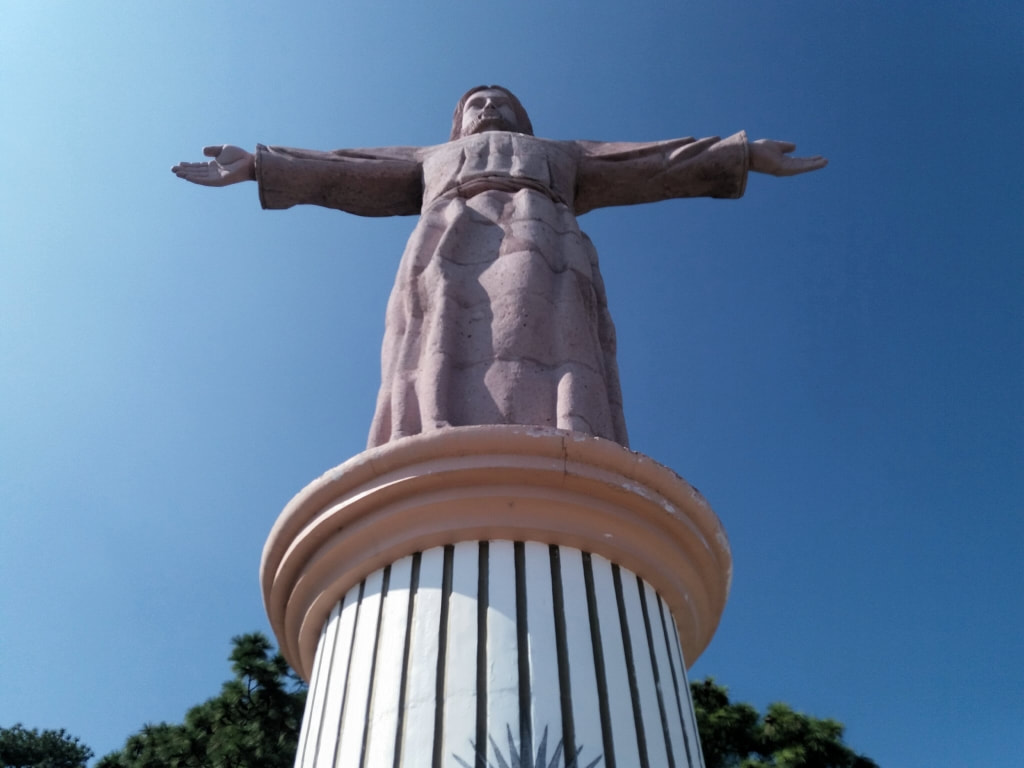 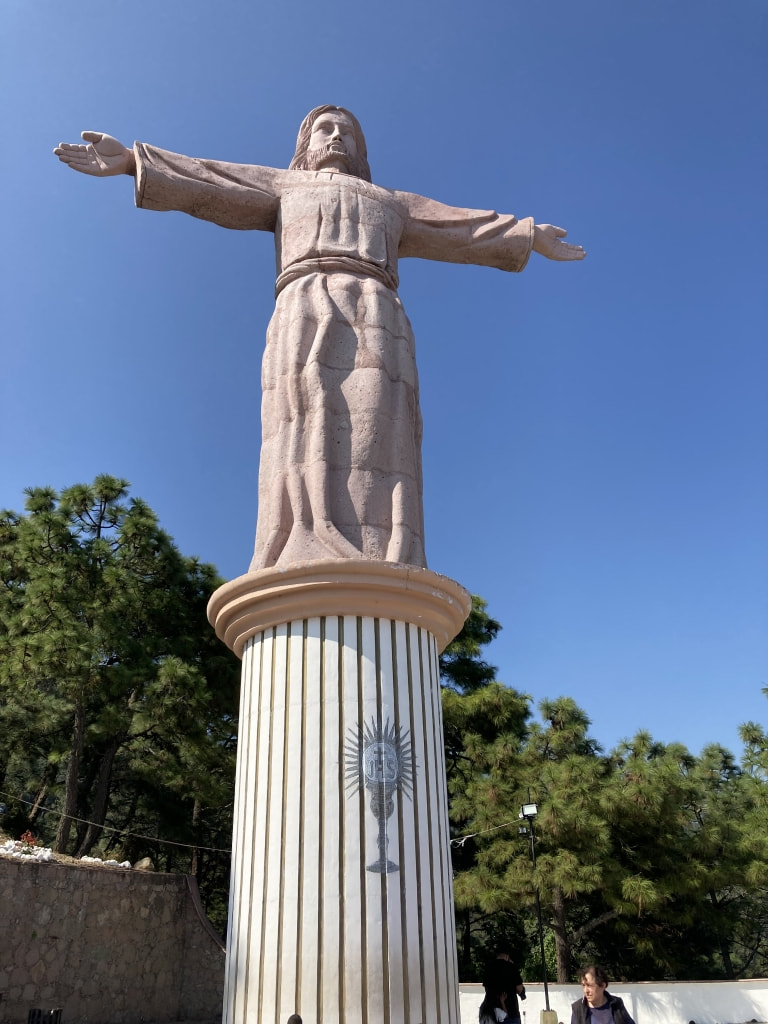 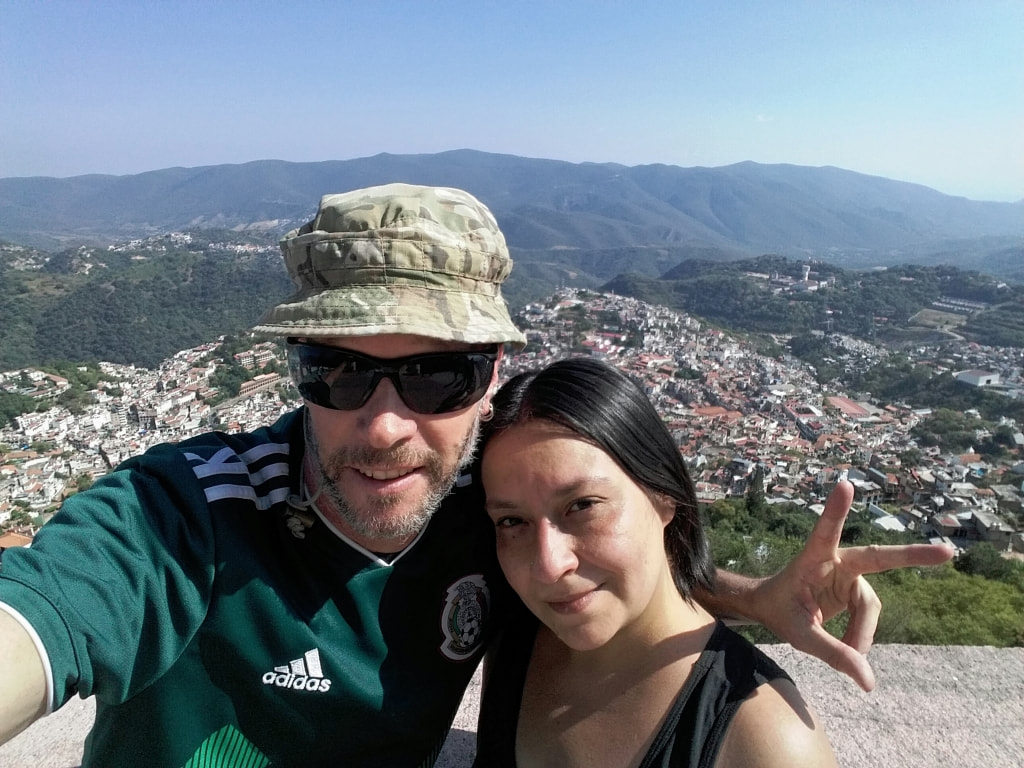 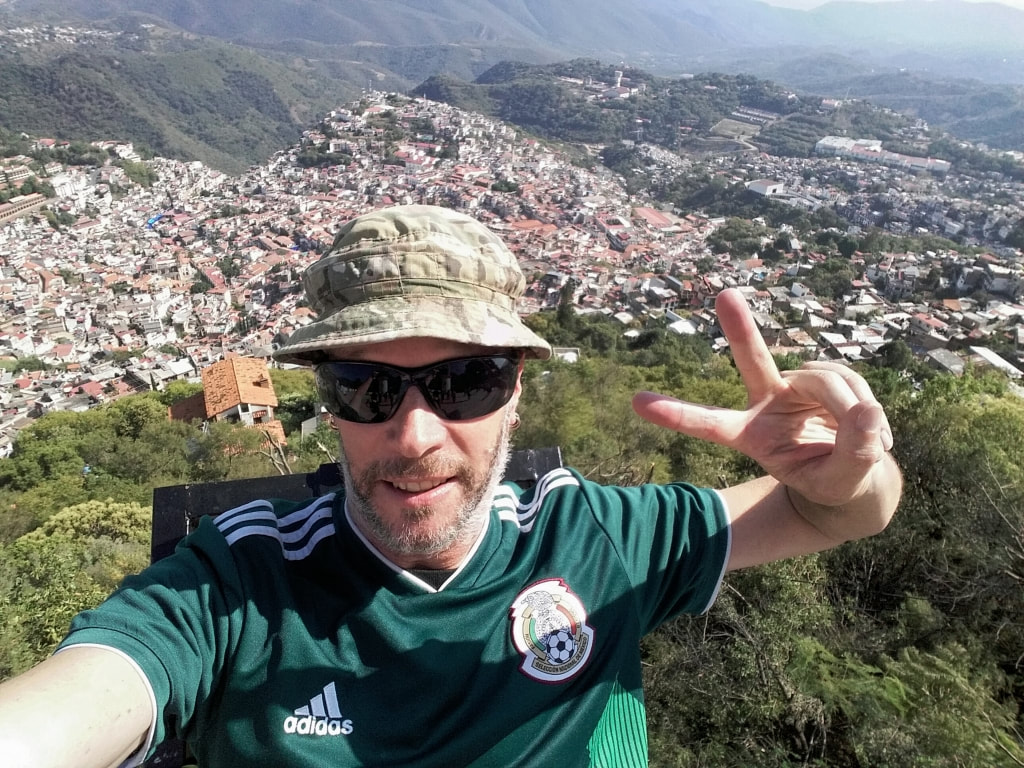 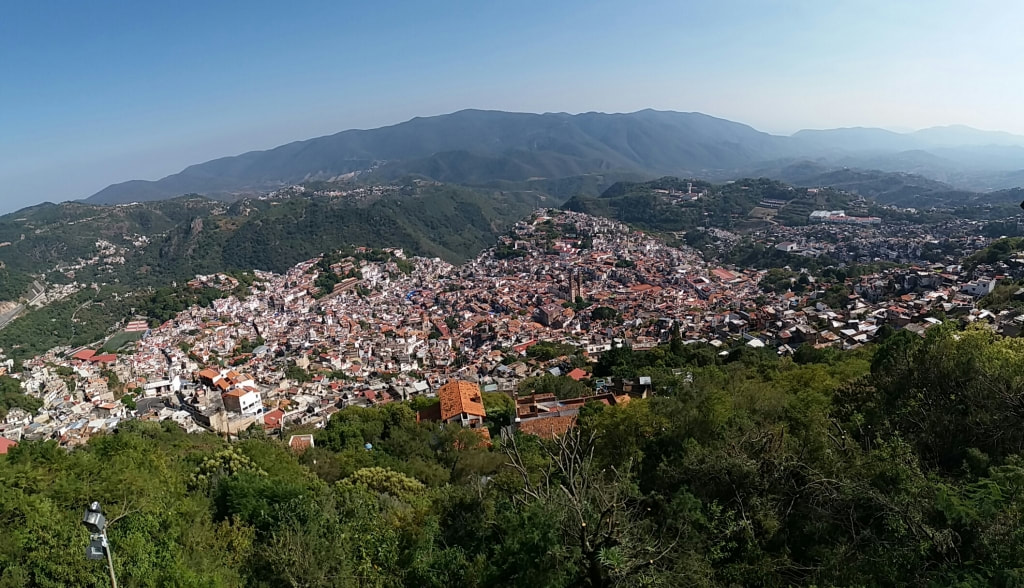 Then we made out way back down using a different route to the Ex-convento de San Bernardino de Siena: 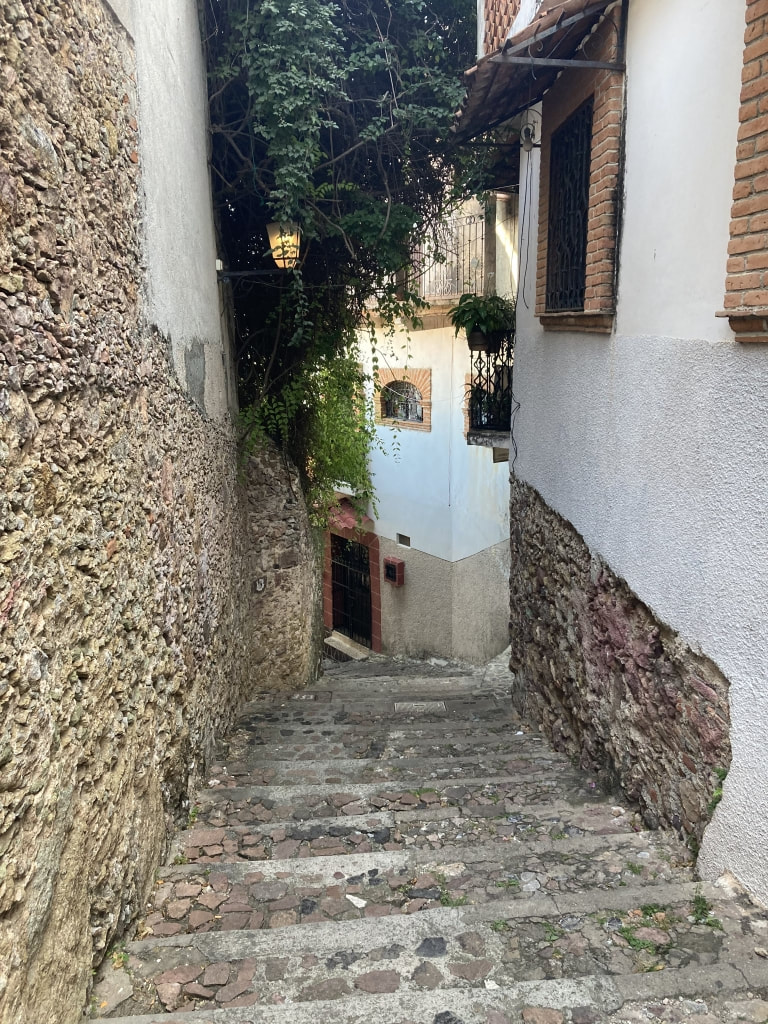 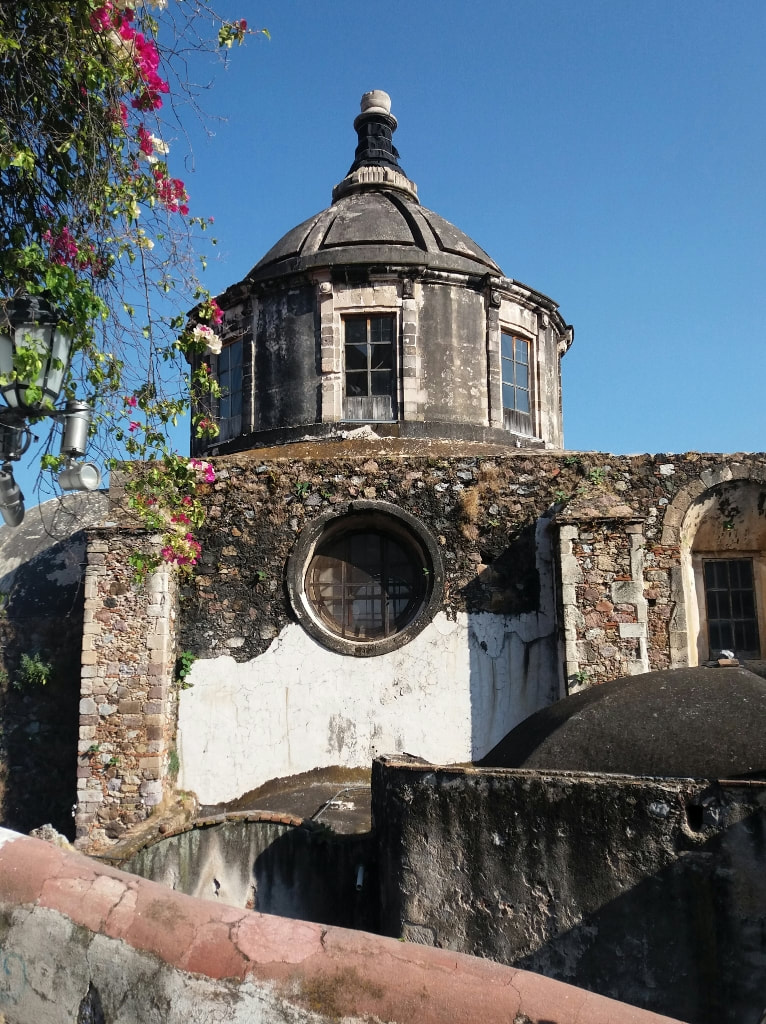 Back in town, looking up at where we were, at the El Cristo Monumental de Taxco, in the center of the photo, on the sky-line, emphasising just how high it is above town and how steep the walk was: 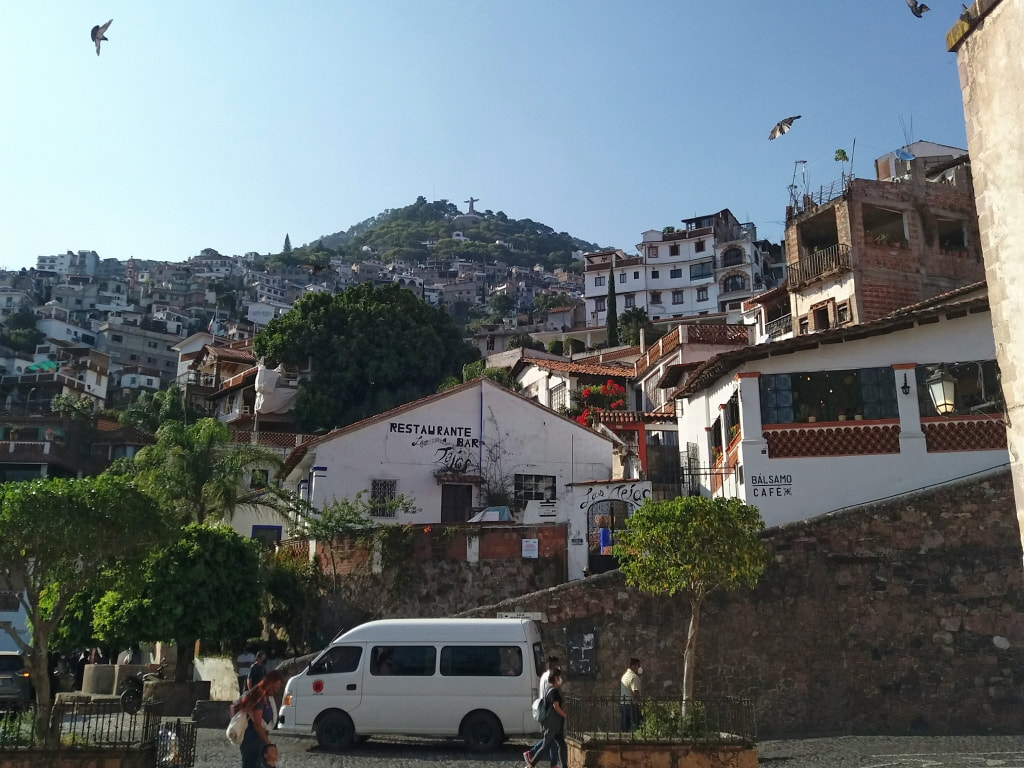 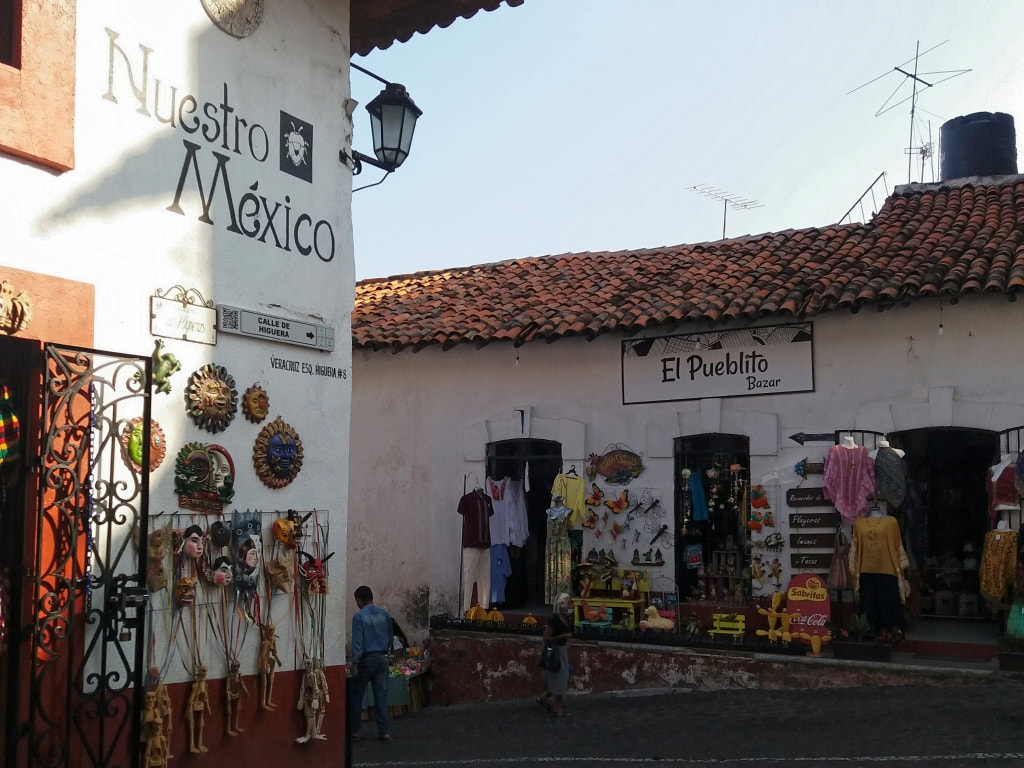 And then we took a leisurely dinner at the Rosa Mexicano restaurant. We got to taste the Cerveza Edición Limitada Modelo Noche Especial, which was real treat: 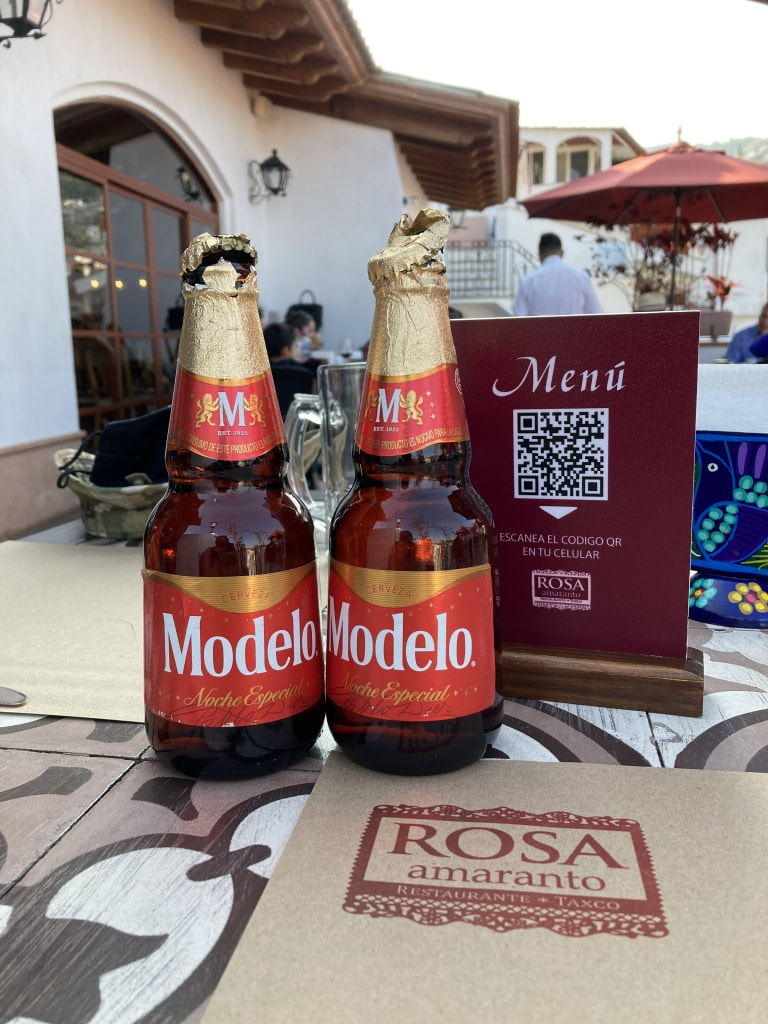 For the meal, we enjoyed Mole Rosa, for Miss CDMX, a speciality of Taxco and a fine Tuna steak for me: 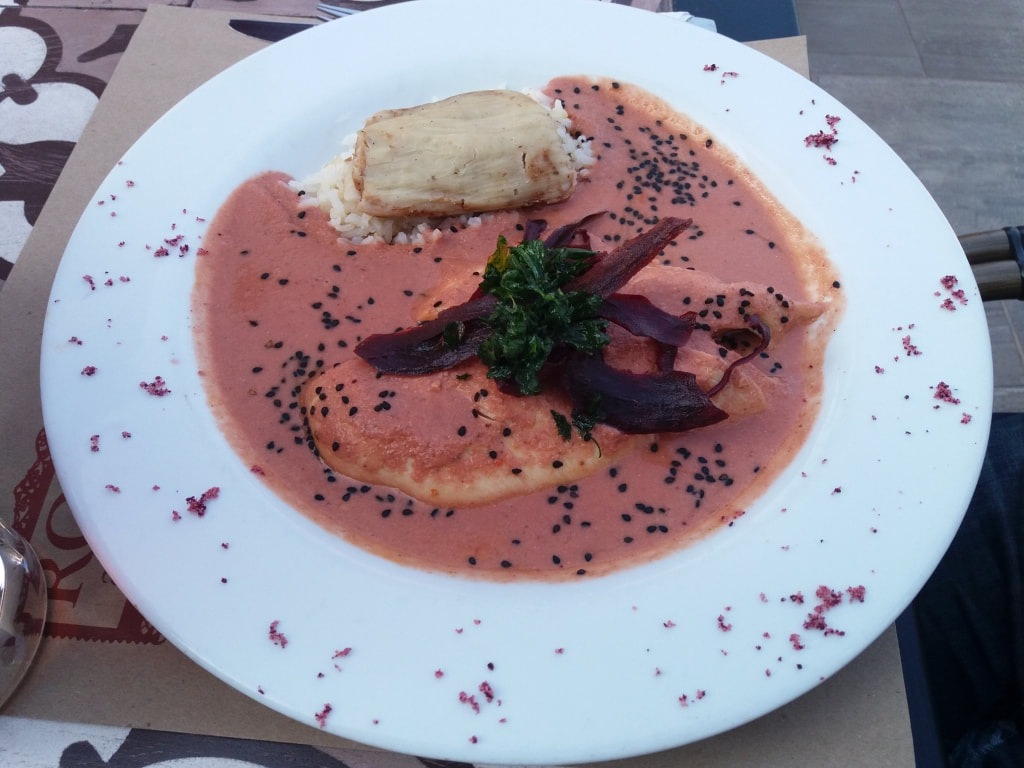 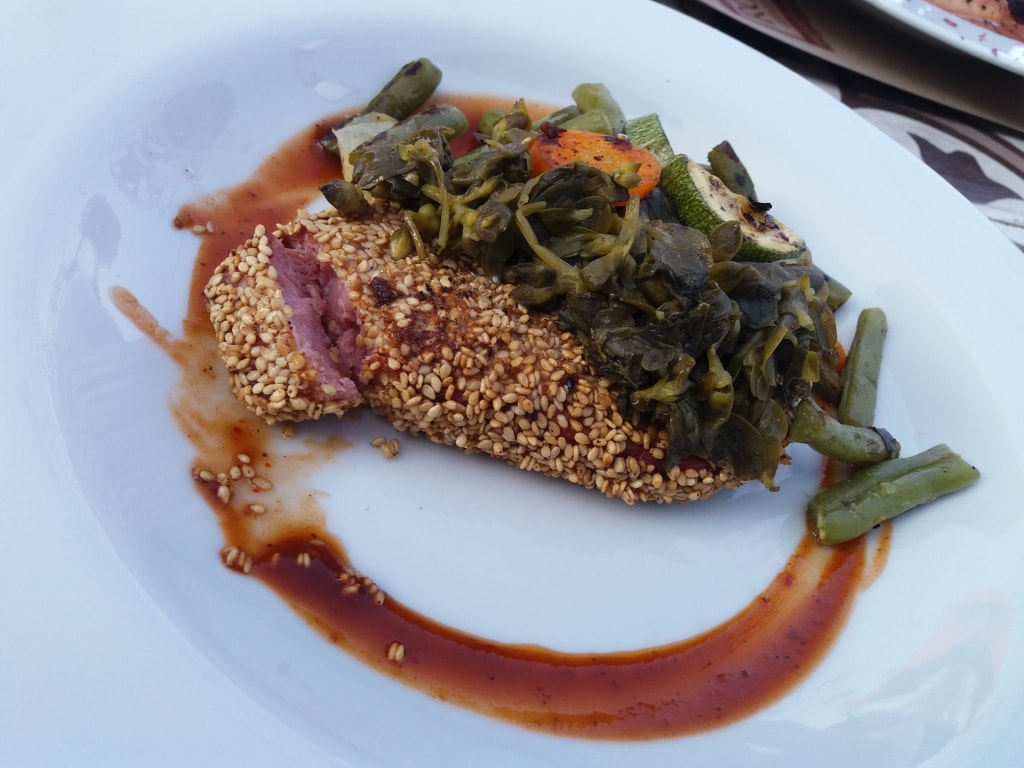 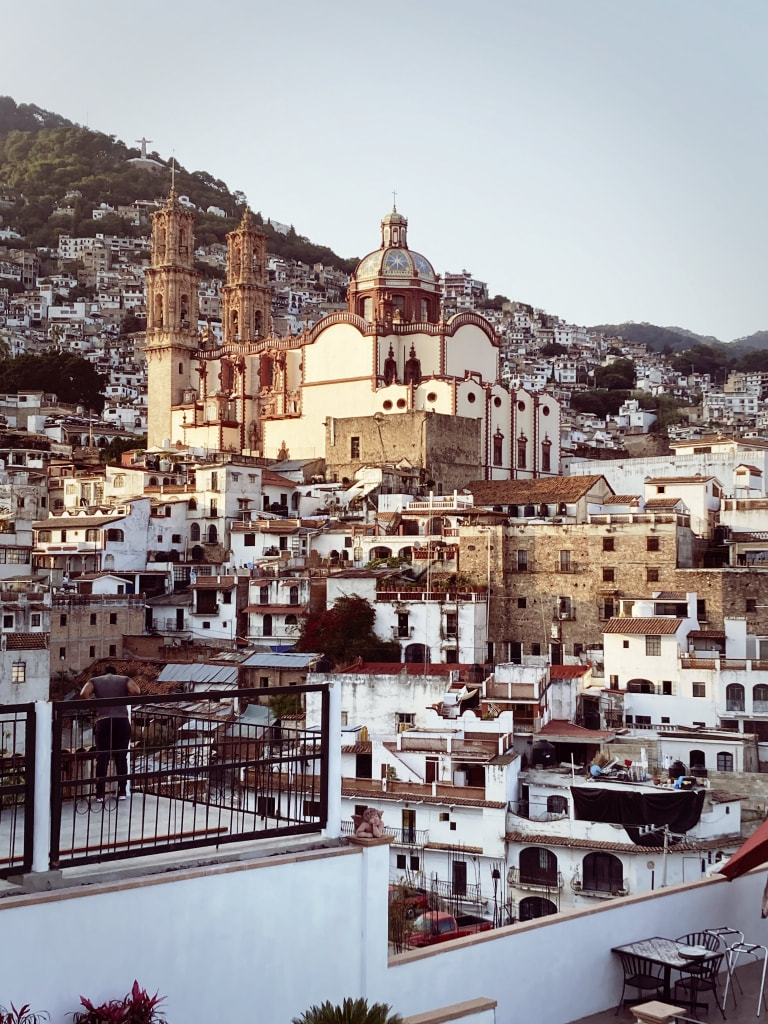 How to get from Mexico City to Taxco

Estrella de Oro run the services out of the southern bus terminal, "Central del Sur Taxqueña" and you can get there using Linea #2 of the Metro. It's the last stop.
​
Just walk through the rather confusing market to get to the bus terminal. 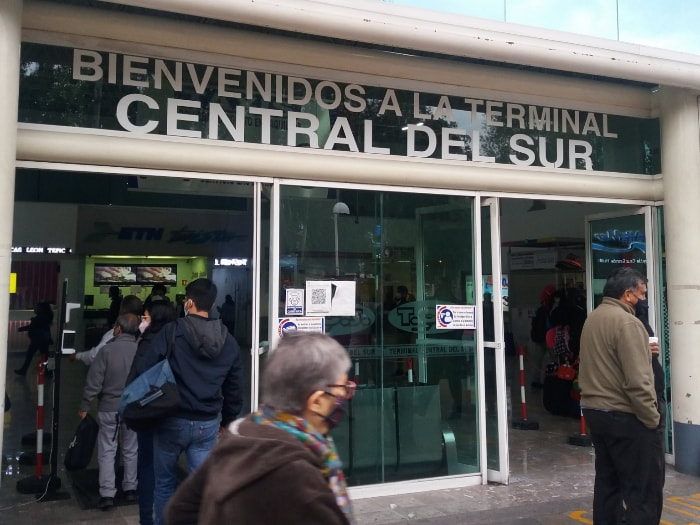 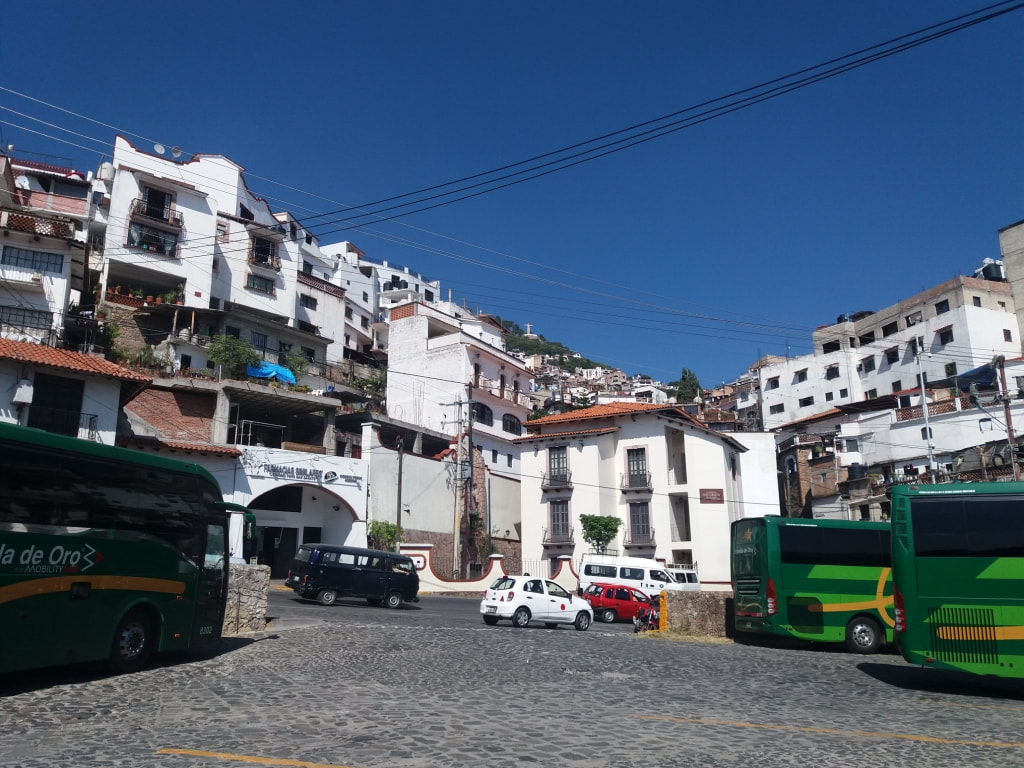 We booked the day before using 'clickbus' and tickets were 280 and 265MXN respectively.

Just to reiterate, getting out of town on a Saturday evening​ was a congested nightmare.

Oh, and the last point I will make, is that Taxco is in Guerrero State and police checkpoints are possible when crossing state boundaries, so make sure you carry your passport and FMM card.
​
​Tagged under: Mexico